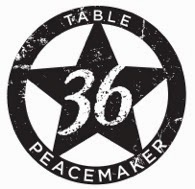 St. Louis based boutique cigar maker Table 36 cigars has formally announced their third blend.  The Table 36 Peacemaker will become the company’s third line and will an official launch at the 2014 IPCPR Trade Show in Las Vegas.  The Peacemaker joins Fellowship and Integrity as cigars that were launched in 2012 an 2013 respectively.

The differentiating factor will be that the Peacemaker will feature a shagged foot which they also describe as an “exploded foot” revealing an inch of unwrapped binder and filler.

“This is a bold statement for a young company,” states Table 36’s co-founder, Will Blicharz in a press release. “It takes real skill and experience to roll a cigar whose barrel is tight right up to the transition between the rim of the wrapper and the emerging shaggy inner leaves. Luckily, the Danli, Honduras, factory of dark-tobacco giant Nestor Plasencia has perfected this process.”

In describing the blend Blicharz says “The medium-bodied Peacemaker is especially complex and balanced. The predominant flavor note is nuttiness, with wood smokiness and other fleeting nuances that are especially hypnotic and appealing.”

Table 36 Cigars launched back in 2012 with the Fellowship.  The name is derived from a group of cigar enthusiasts that met regularly at a local restaurant. The meetings were regular and as a result the group earned a table that could be used exclusively.

At a glance, here is a look at the Table 36 Peacemaker:

The Peacemaker is made at Nestor Plasencia’s factory in Danli, Honduras.  The wrapper was described as “rustic”

The Peacemaker is available in four sizes.  The cigars will be available in 20 count Spanish Cedar boxes.  The branding has a “western” theme including a new logo that has a Texas Ranger 5 pointed badge.  All cigars are rolled entubado style.  Pricing is between $4.95 to $7.25