At the 2014 IPCPR Trade Show, Ocean State Cigars will debut their fourth line, the J. Grotto Anniversary.  This is a significant launch for four reasons:  First up, it introduces a Connecticut Broadleaf wrapper blend into the company’s portfolio; secondly, it adds a fuller and stronger cigar to Ocean State’s lineup; third, it marks the first cigar that Ocean State Cigars has made with Debonaire Cigars; and finally it commemorates several family occasions for owner Paul Joyal.  Today we take a look at one at a pre-release of one of the offerings in the J. Grotto Anniversary – the toro-sized T650.  Ocean State Cigars has done some great work over the past few years, but from this pre-release this could be the best work to date by the company.  This is one outstanding Connecticut Broadleaf cigar.

Ocean State Cigars gets its name because the company is based in Rhode Island.  The company was founded by Joyal who owns Mr J’s Havana Shop in Warwick, Rhode Island.  Joyal named his lines of J. Grotto because of an area in his yard known as the “grotto”.  The company has previously released three lines joining the J. Grotto, J. Grotto Reserve, and J. Grotto Silk lines.  In 2012, the company landed on the Cigar Coop “Five Boutiques to Watch”.

Without further ado, let’s take a closer look the J. Grotto Anniversary.  Since this assessment is based on a pre-release cigar, we will default to our pre-review format.  This will allow us to share our thoughts and perspectives on the cigar experience.  Once the cigar is released, we will revisit this cigar and provide a formal assessment rating and score.

Blend Profile
As mentioned, the J. Grotto Anniversary has been done in conjunction with Debonaire Cigars.  In addition it features tobaccos from the Dominican Republic and what Joyal has said “other Central American” countries.
Wrapper: Connecticut BroadleafBinder: Dominican HabanoFiller: Dominican and Other Central American TobaccosVitolas Available
The J. Grotto Anniversary line is being launched in four sizes:
L458: 4 x 58T650: 6 x 50P555: 5 x 55E660: 6 x 60

As mentioned, for this cigar experience, I smoked the toro-size T650 vitola. The J. Grotto Anniversary has a classic Connecticut Broadleaf wrapper.  It has a rich coffee bean color with a touch of colorado red in it.  Upon closer examination some darker marbling can be seen on the surface.  The wrapper itself has some oil on its surface.  There are some visible veins, but the wrapper seams are actually well-hidden.

The pre-release samples are unbanded.  A preview of the band is below.  Most notable on the band are the gold medallion adorned with “65” and “30” signifying the Joyal family anniversaries. 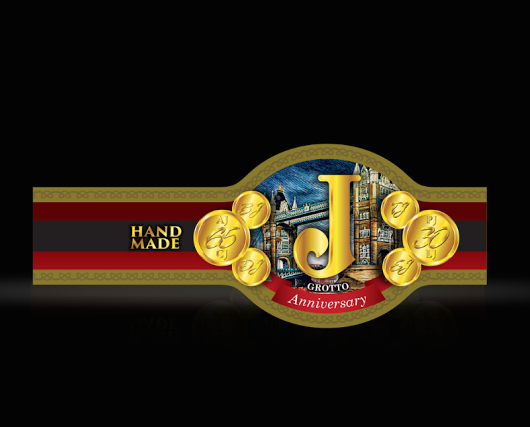 The logo with the anniversary medallions also appear on the cedar boxes. 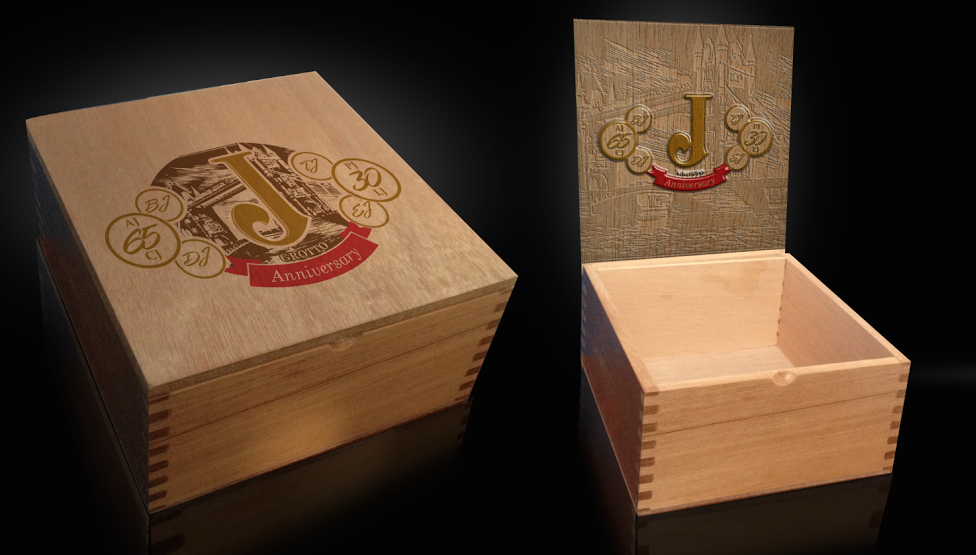 Prior to lighting up my J. Grotto Anniversary T650, I went with my usual choice of a straight cut. Once the cap was removed, I proceeded with the pre-light draw. The dry draw provided a mix of coffee and earth along with a touch of cedar spice. Overall, I considered the pre-light draw of this cigar to be satisfactory. At this point, I was ready to light up this cigar and see what the smoking phase would have in store.

The start to the J. Grotto Anniversary T650 provided a mix of white pepper and black coffee.  The pepper was definitely more prominent on the after-draw and retro-hale.  In fact the retro-hale delivered a strong dose of spice – giving the cigar much of its power.

In the early stages, the coffee notes get rich and become the primary flavor. The pepper notes are secondary on the draw, but still remained prominent on the after-draw and retro-hale.  An earthy undertone also surfaces in the background.

Around the ten percent mark of the J. Grotto Anniversary, the coffee notes morphed into a sweet espresso syrup flavor that weighs nicely on the pallet.  There was also a maduro-like sweet note that was a combination of cherry and citrus.  At the same time, these notes still have very much a tobacco taste to them.  From this point until close to the 2/3 point, the espresso syrup and maduro sweet notes alternated as to which is the main flavor.  Meanwhile the earth notes remained secondary, and the pepper was secondary on the draw, but still more prominent on the after-draw and retro-hale.

On the last third, the earth and spice notes became the primary flavors.  There still was some coffee and sweet notes in the background.  This is the way the J. Grotto Anniversary came to a close.  The resulting nub was cool in temperature, but slightly soft to the touch.

When Joyal broke news on our Stogie Geeks show announcing the collaboration with Debonaire, he noted how “He (Debonaire owner Phil Zanghi) gave me (Joyal) the same quality he has.”  We have assessed several Debonaite cigars on both Cigar Coop and Stogie Geeks and have seen this excellent track record reflected on the burn and draw.  The J. Grotto Anniversary definitely follows suit here.

The burn line of the J. Grotto Anniversary remained straight requiring only occasional touch-ups along the way.  The resulting ash was a charcoal gray color.  It was prone to some minor flaking several points along the way.  The burn rate and burn temperature were both ideal.

The draw performed very well.  I did not find this to be overly loose or overly tight.  This made the J. Grotto Anniversary an enjoyable smoke from start to finish.

There are two recommendations I have in terms of the J. Grotto Anniversary.  The first is dry box this cigar a bit.  In general when it comes to Broadleaf, I usually do recommend some dry box or store at a lower humidity as I find this wrapper tends to absorb moisture pretty quick.  The second is going to be to retro-hale this cigar. The retro-hale, while it does amplify the strength and body, it also adds another dimension to the overall flavor profile.  Since this was a full strength, full-bodied smoke, I am curious to what time does to the strength and body of this cigar, but only time will tell.  Overall this is a cigar I’d recommend to an experienced cigar enthusiast who likes a full and strong cigar.  As for myself, this is a cigar that I would definitely smoke again.  It’s also one that I can see Box Worthy or even Chuck Norris level once it is released.