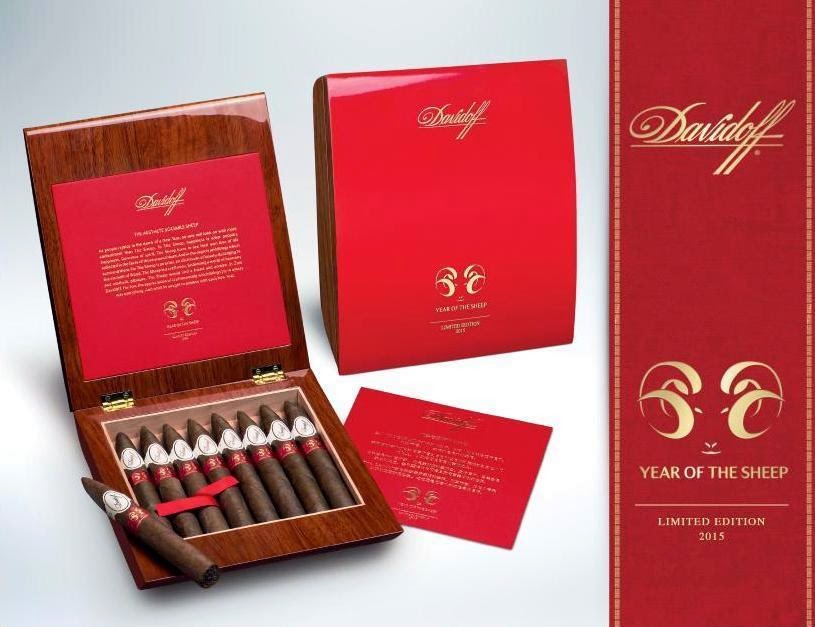 The Davidoff 2015 Year of the Sheep marks the third cigar by Davidoff to pay tribute to the Chinese New Year.  As with previous years, the cigar will be a limited production of a new blend in a single size.  This year the Year of the Sheep introduces a 6 1/4 x 54 belicoso.

Cigar Aficionado has reported the cigar will be soft-launched at the Davidoff Mandalay Bay location in Las Vegas around the publication’s Big Smoke event on November 8th.  This will be followed by another soft launch in mid November at the Davidoff Madison Avenue store in New York.  The cigar is expected to ship to appointed merchants in December.

The cigars will be packaged in 8 count boxes with a total production of 3,000 boxes. Each cigar will carry an SRP of $35.00.

The inside cover of each box features a short writeup called “The Aesthete Sociable Sheep”:

As people rejoice in the dawn of a New Year, no one will look on with more contentment than the Sheep. To the Sheep, happiness is other people’s happiness. Generous of spirit, the Sheep loves to see their own love of life reflected in the faces of those around them as well as the objects and things which surround them. For the Sheep is an artist, an aficionado of beauty. Belonging to the element of Wood, the Sheep is a craftsman, fashioning a world of harmony and aesthetic pleasure. For Davidoff, the appreciation of craftsmanship which brings joy to others is what we seek to achieve with each New Year”.

Davidoff’s series dedicated to the Chinese Zodiac launched in late 2012 with the Davidoff 2013 Year of the Snake.  This was followed up in 2013 by the Davidoff 2014 Year of the Horse.  The two cigars placed #2 and #17 on the Cigar Coop Cigar of the Year countdown for 2013.

At a glance, here is a look at the Davidoff 2015 Year of the Sheep.