2014 Year in Review: The Honorable Mentions

January 9, 2015 William Cooper Cigar of the Year No Comments 2014 Year in Review 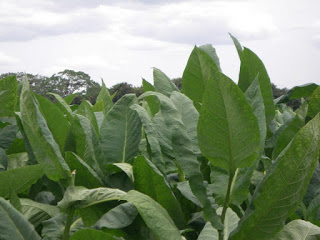 The Cigar Coop 2014 Honorable Mentions follow the criteria set forth in 2014. The purpose of this list is to select ten standout cigars smoked in 2014 that did not meet the criteria to qualify for the Cigar of the Year Countdown.

For the most part, this list will include cigars released prior to the start of the 2014 Cigar Coop Cigar Year window (11/29/13 – 11/27/14), but were not assessed and scored (and in some cases not smoked) in the year released.  There are some other cigars that can be considered that would not normally qualify for the Countdown. This can also include event only cigars, re-releases of previous blends and/or vitolas, and even 2014 releases that were smoked only a single time (all of which do not qualify for the Countdown)

For each selection, one vitola was selected. All cigars must have been assessed on Cigar Coop during the 2014 Cigar Coop Cigar Year. Line extensions of previously released and assess blends are not considered.

Why it’s a Honorable Mention?   It was released prior to the 2014 Cigar Year but smoked for the first time in 2014.

Of the three primary brands from Selected Tobacco, the Bandolero line is the one that seems to have the most spice. The Bandolero Bravos delivers a complex flavor profile of natural tobacco, leather, and citrus.  What stands out here is a mix of exotic and tangy spices.

Overall a unique smoke and worth checking out.

Why it’s a Honorable Mention?   It was released prior to the 2014 Cigar Year but smoked for the first time in 2014. 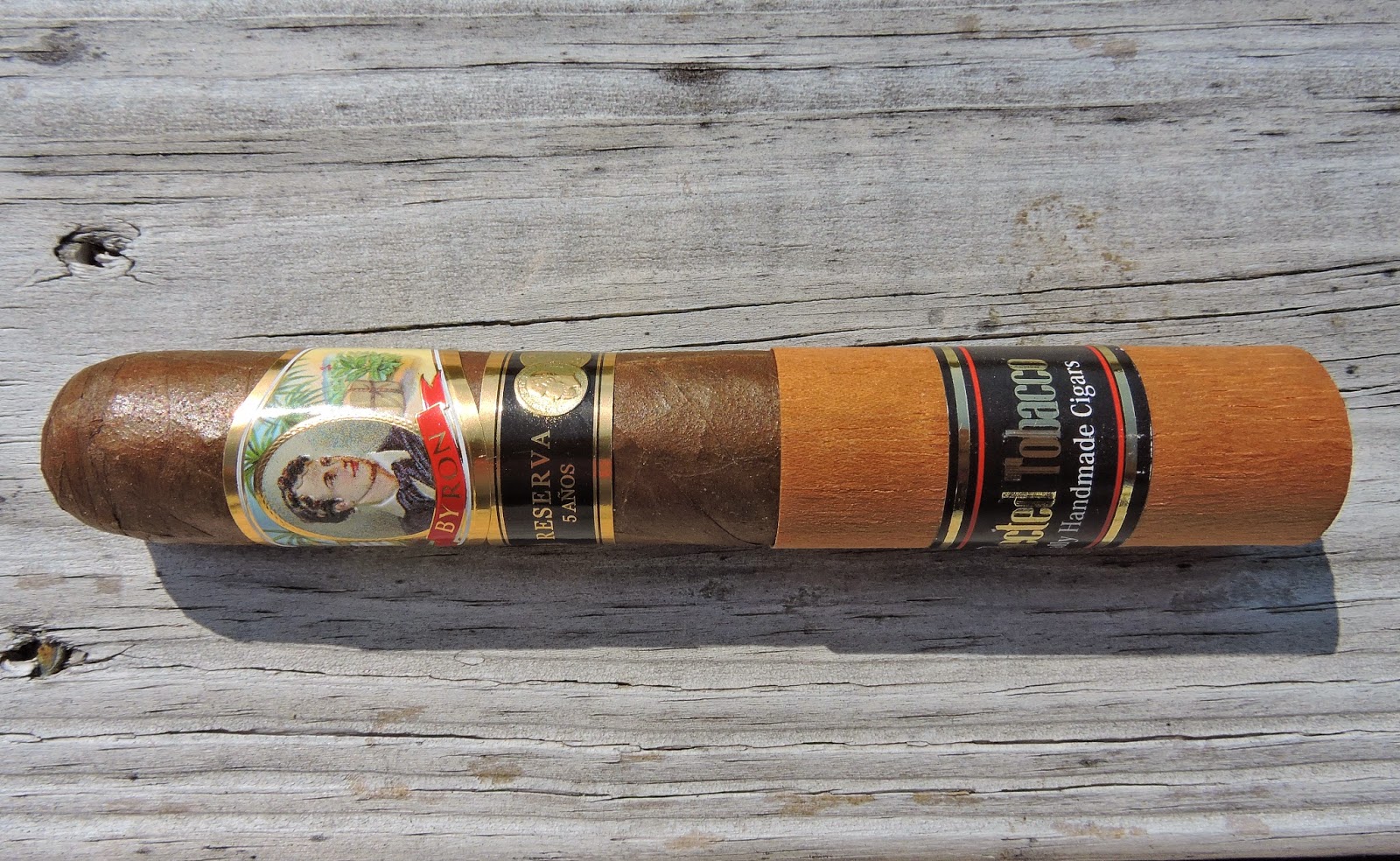 Selected Tobacco earns a second slot on year’s Honorable Mentions.  This one comes from the Byron  Siglo XX line. The Byron line consists of three blends: Siglo XIX, Siglo XX, and Siglo XXI. Each of the blends are unique and as with all of Alfonso’s blend, the tobacco components are not disclosed.   The Londinenses size is a 5 1/4 x 54 vitola of the  Byron Siglo XX. Like all brands from Selected Tobacco, the cigar is made in Costa Rica and the blend is not disclosed. Also consistent with many Selected Tobacco the Byron line is available in various packaging options – from porcelain jars, humidors, to the individually humidified “humitubes”.

The Byron delivered a nice amount of complexity providing a mix of sweet natural tobacco, sugar cane, white pepper, and a slight molasses note. The sweetness changes up to more of a fruit flavor in the second third. There is an increase in spice in the second half, but the cigar remains flavorful with no harsh notes. The flavors start out medium-bodied, progress to medium to full by the midpoint, and reach full-bodied at the end. The strength starts out medium and progresses to medium to full in the second half.

While it carries a high price tag ($30.00), this cigar does provide a complete experience.

Why it’s a Honorable Mention?   It was released prior to the 2014 Cigar Year but the final production cigar was smoked for the first time in 2014. 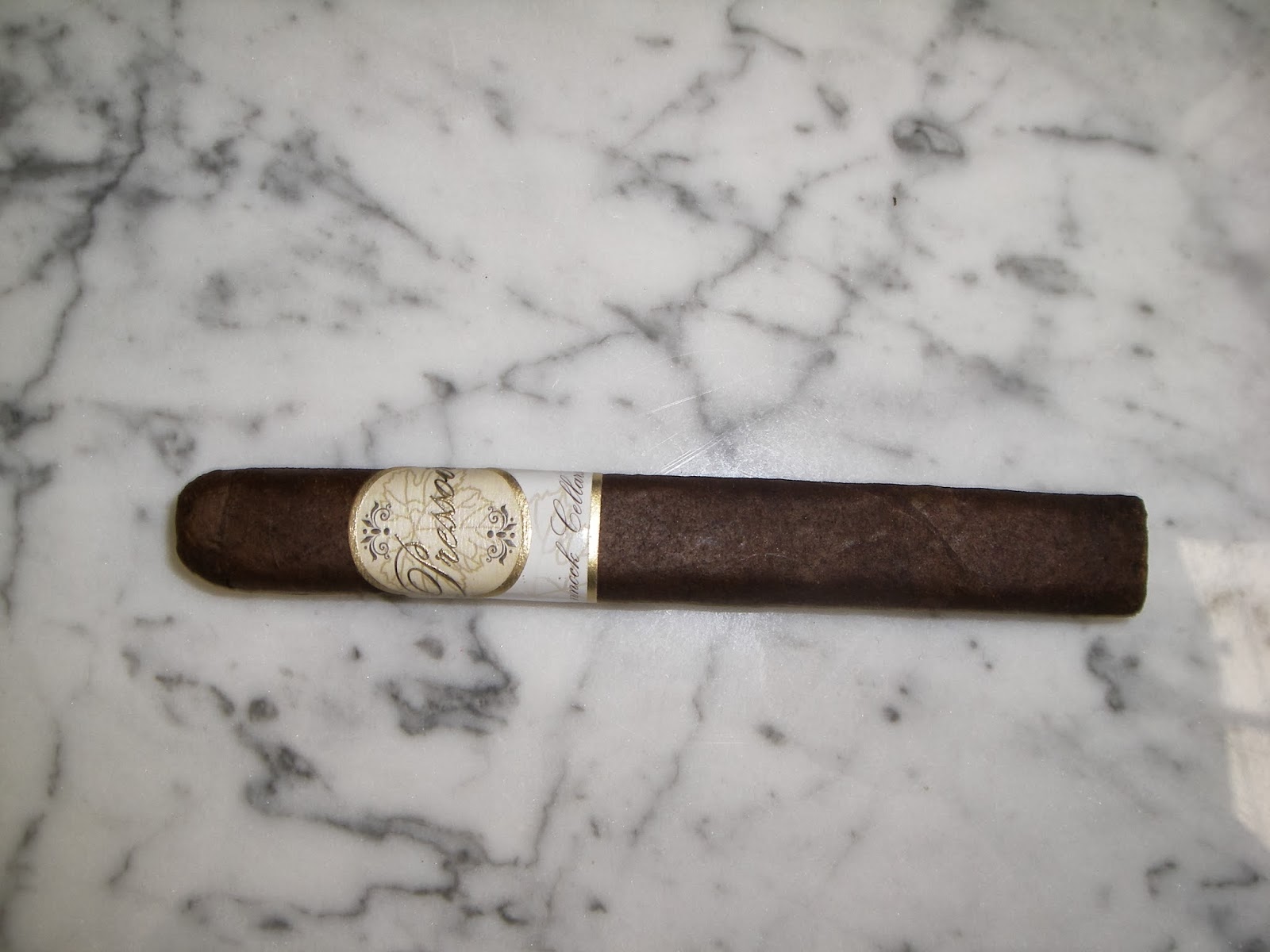 Released late in 2013, the Chinnock Cellars Pressoir became the third release by Brian Chinnock’s cigar company. It is significant for three reasons: First up, it marks the first maduro to be made by the company; second, it is the first cigar Chinnock Cellars has been made outside the United States as they partner with the Compania Hondurena de Tabacos (Kuuts) factory in Danli, Honduras; finally, it introduces a box-press into the company’s portfolio.

The blend features a San Andres Maduro wrapper, a Honduran binder, and fillers from Nicaragua and Honduras.  It was released in two sizes with the Toro measuring 6 x 52.

The Pressoir delivered notes of mocha, white pepper, cream, earth, and nut. The flavors are medium to full-bodied countered by medium strength.  This was a well-blended cigar and the San Andres wrapper did not overpower the blend.  Overall, this ranks as the best release by Chinnock Cellars to date.

Why it’s a Honorable Mention?   It was released prior to the 2014 Cigar Year but not scored for the first time in 2014. 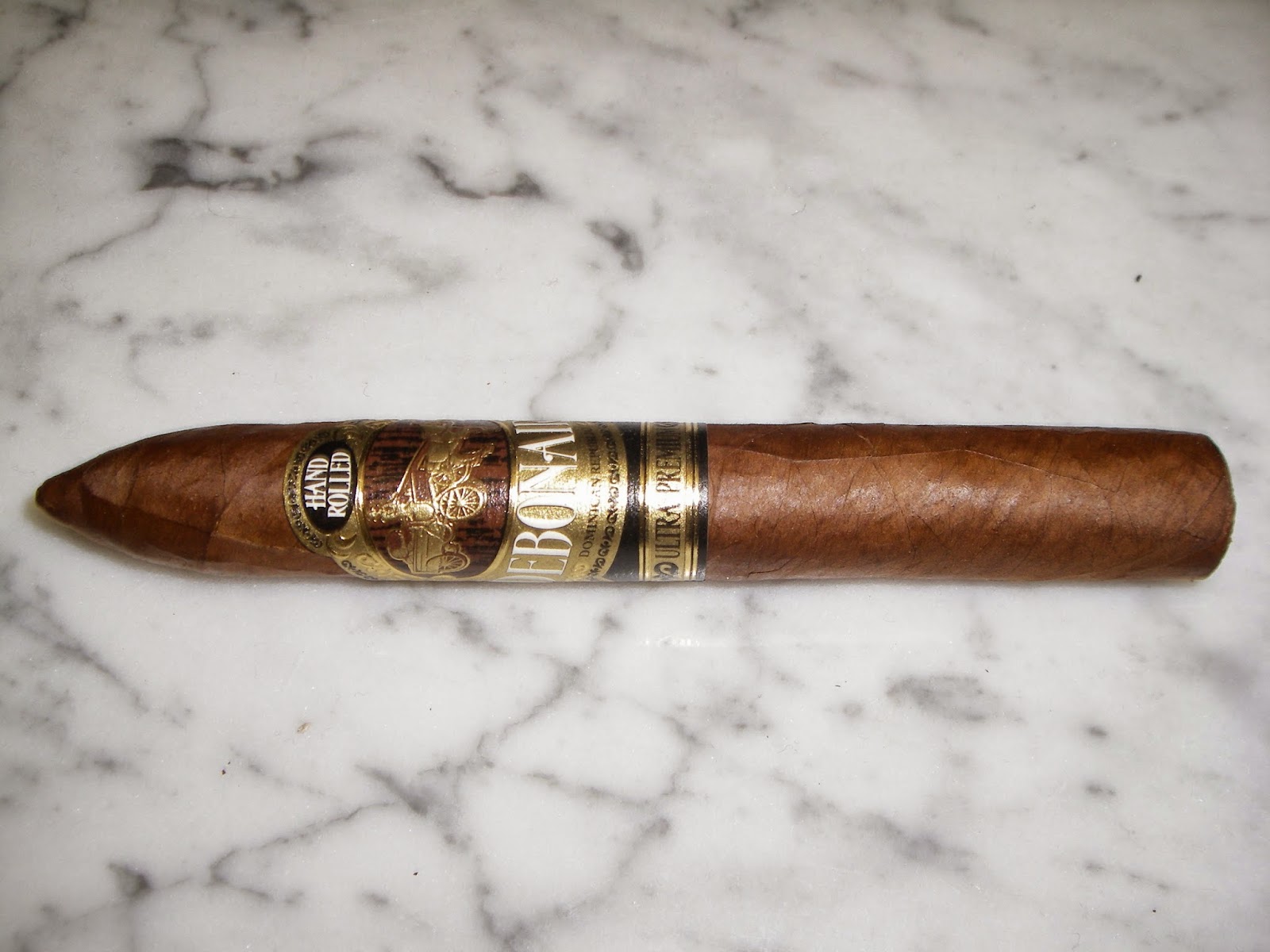 This one comes from the core Debonaire (Habano) line. This was the original line launched by Phil Zanghi’s Debonaire Cigars back in 2012.  The blend consists of a Nicaraguan Habano wrapper, a Dominican binder, and a mix of fillers from Nicaragua and the Dominican Republic.  The 6 x 54 belicoso was one of the first three vitolas released in this line.

The Debonaire Belicoso delivers a most unique flavor profile.  It starts out with a lot of natural tobacco sweetness, “almost candy like”. This is before the signature chary meat flavors this blend is synonymous with flavors emerge. There also is a wonderful black pepper note complementing it. Later the sweetness became smoother – almost caramel like while still maintaining a natural tobacco quality. While the charred meat flavor diminishes in the later stages, but the cigar doesn’t miss a beat.

The Debonaire Belicoso is a medium to full-bodied smoke with the strength starting out medium before progressing medium to full by the second half.  If you are exploring the Debonaire line, this is the size to check out

Why it’s a Honorable Mention?   While available in limited production prior to this year, this cigar was scored for the first time in 2014. 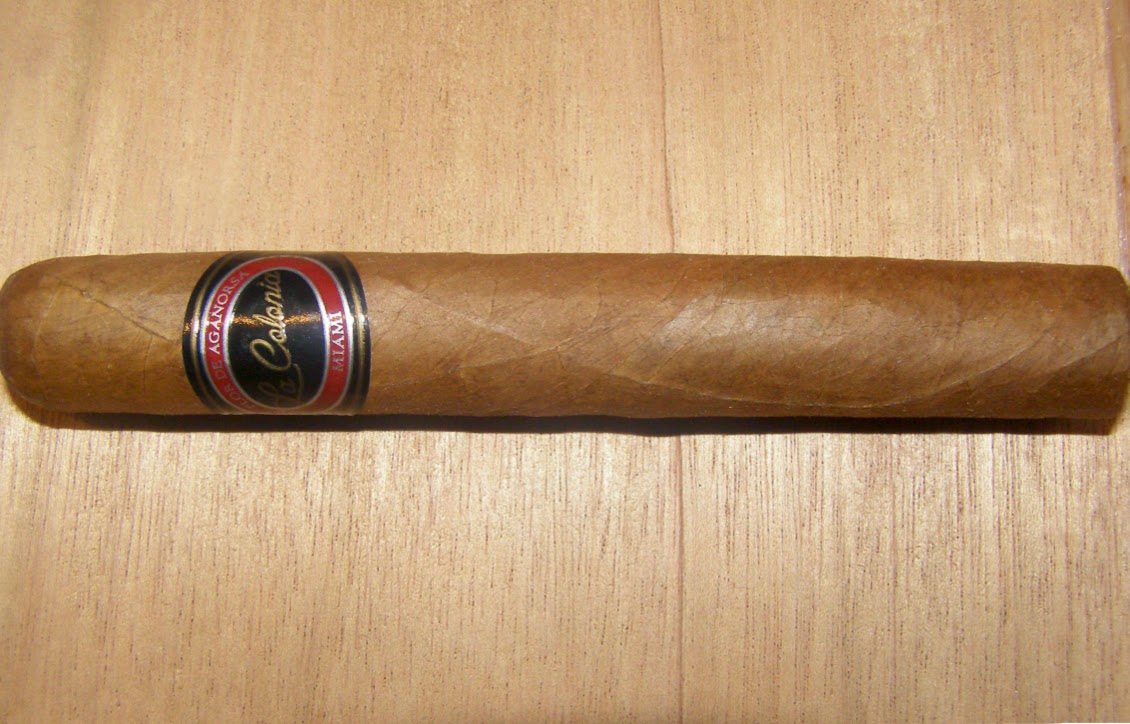 La Colonia Cigars might be the best cigar you have not heard of.  This is a brand of cigars being done in collaboration with Casa Fernandez. It is being made at the Tabacalera Tropical factory in Miami and has been blended by Arsenio Ramos.The La Colonia Miami is a Nicaraguan puro featuring 5 to 7 year Aganorsa far tobacco.  The cigar was launched in four sizes with the 5 1/2 x 50 Robusto Extra becoming a favorite of ours.

This is one of the most unique cigars I ever smoked. The signature flavor of this line is going to be almost a chocolate egg cream soda flavor. This cigar also offers has plenty of tobacco flavor as well as notes of cedar, pepper, and earth. The notes are full-bodied. The strength is medium to full for most of the cigar before progressing to full-bodied. This is a cigar to keep an eye out for.

Why its a Honorable Mention?   It was released prior to the 2014 Cigar Year but the final production cigar was scored for the first time in 2014. 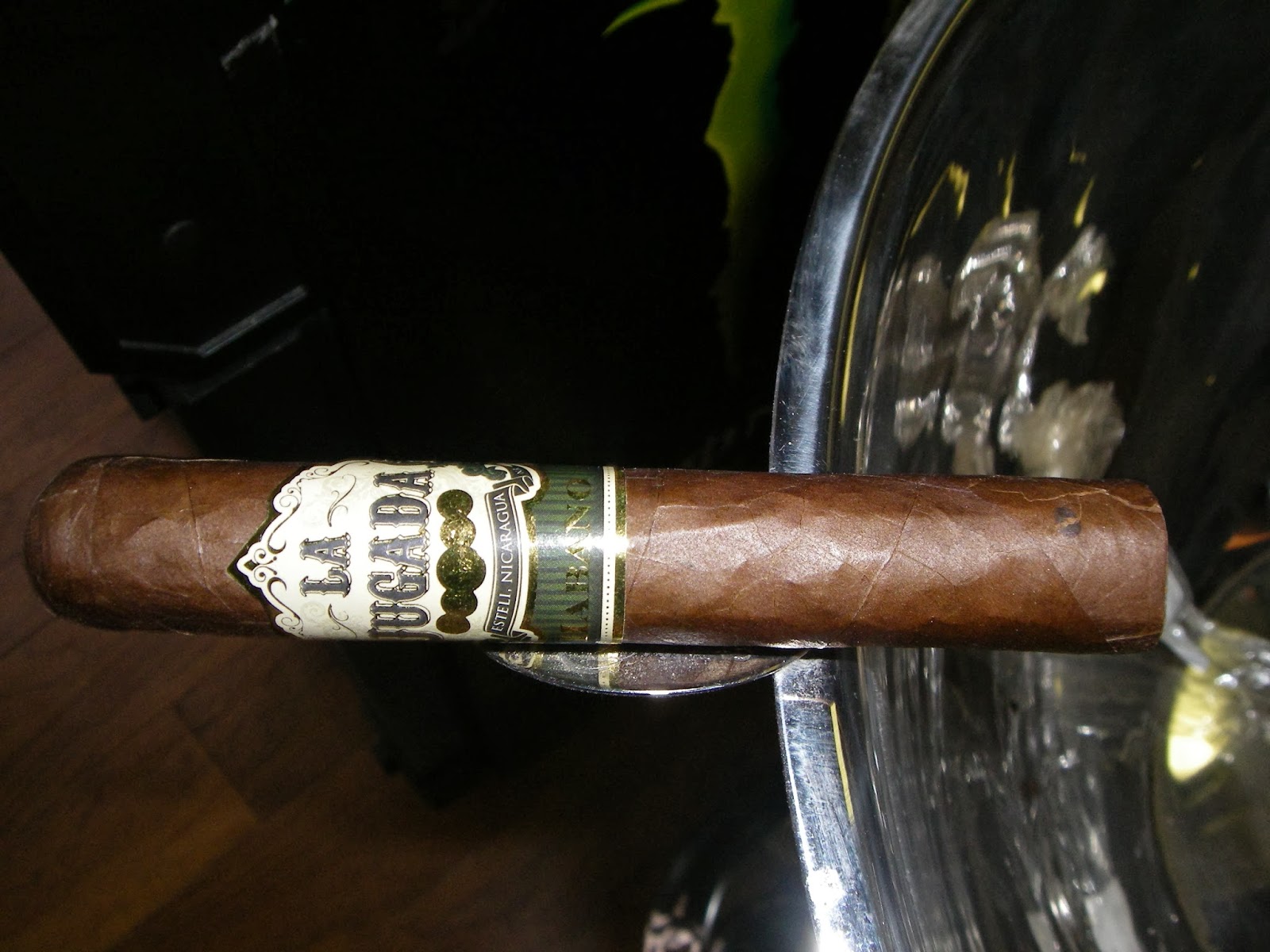 The La Jugada Habano is the second cigar released by Moya Ruiz Cigars. Moya Ruiz is a small company founded by Danny Moya and Nelson Ruiz. They make their cigars at Erik Espinosa’s La Zona factory. This would be the company’s second release as it launched at the 2013 IPCPR Trade Show.

he cigar features an Ecuadorian Habano wrapper over Nicaraguan binder and filler.  It is available in five sizes with the Robusto being a 5 x 52.

This cigar is an absolute flavor bomb. This cigar delivers a sweetness that is a cross between raisin and hard candy. It is balanced nicely by chocolate, pepper, nut, and earth. This cigar has some firepower. While it was considerably stronger at trade show time, this still is a full strength, full-bodied cigar. This cigar is nothing short of a home run.

Why its a Honorable Mention?   It was released prior to the 2014 Cigar Year but the cigar was scored for the first time in 2014. 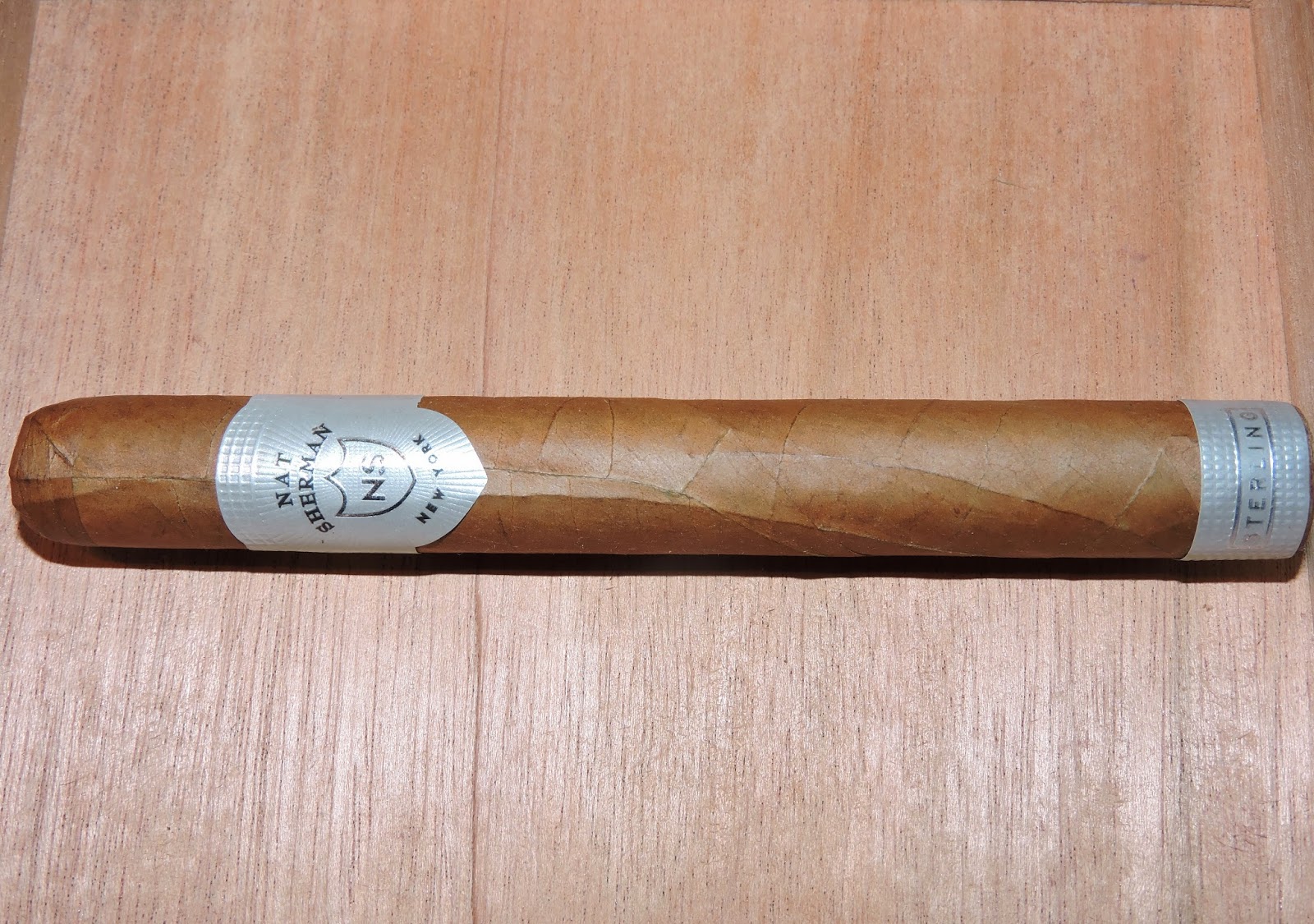 The Nat Sherman Sterling was launched at the 2014 IPCPR Trade Show. This introduced a milder, ultra-premium regular production offering into the Nat Sherman portfolio. For the Sterling, Nat Sherman once again teams up with the Quesada family to produce this cigar. The blend consists of an Ecuadorian Connecticut Shade wrapper over Dominican binder and filler. The Sterling is available in five sizes with the Corona Gorda measuring 5 3/4 x 46.

This is a milder, but flavorful offering.  The strength starts out mild and goes only to Mild to Medium by the last third. At the same time, the flavors are subtle and that is the this cigar’s differentiator – starting mild to medium-bodied and going to medium-bodied by the end. The Sterling starts out creamy in the first third, transitions to more natural tobacco and nut in the second third, and delivers some subtle spice at the end.

Why it’s a Honorable Mention?   It was released prior to the 2014 Cigar Year but the cigar was scored for the first time in 2014. 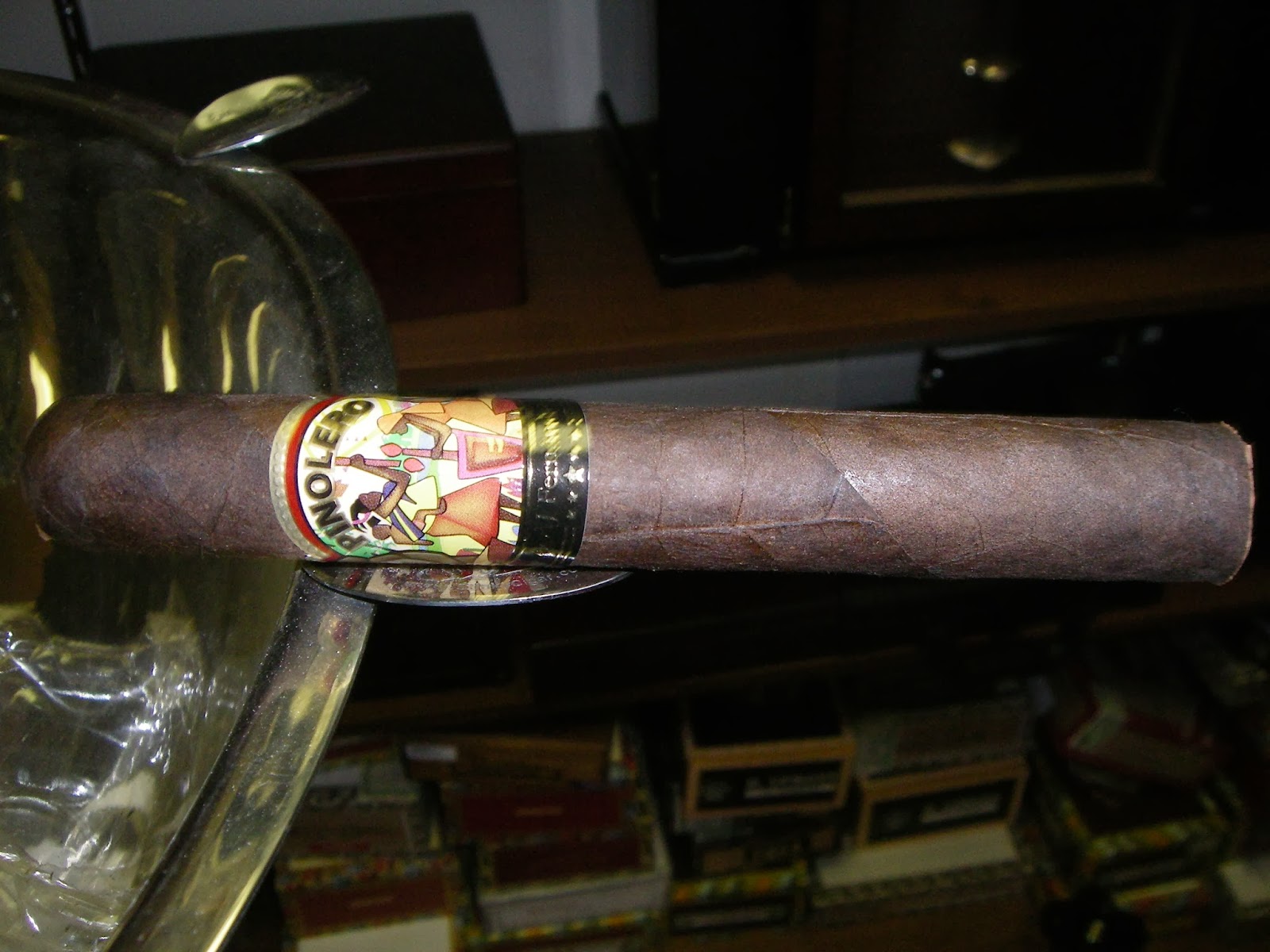 At the 2013 IPCPR Trade Show, A.J. Fernandez Cigars introduced a second blend in its Pinolero line. As the name indicates, the Pinolero Maduro brings a maduro wrapper offering into the line.  The cigar features a Maduro wrapper grown by A.J. Fernandez, a binder from Nicaragua and a combination of Cuban Seed Nicaraguan and Fernandez Family proprietary tobaccos. The cigar was launched in six sizes with the Toro measuring 6 x 52.

The Pinolero Maduro was a standout cigar by A.J. Fernandez in 2013. This cigar delivers notes of mocha, pepper, earth, and creamy undertone. There also is a hint of citrus that helps enhance the sweetness. This cigar has some strength to it. It starts out medium to full and goes to full strength. The flavors start of medium-bodied but catch up to full-bodied until the end.

Why it’s a Honorable Mention?   It was released prior to the 2014 Cigar Year but the cigar was scored for the first time in 2014. 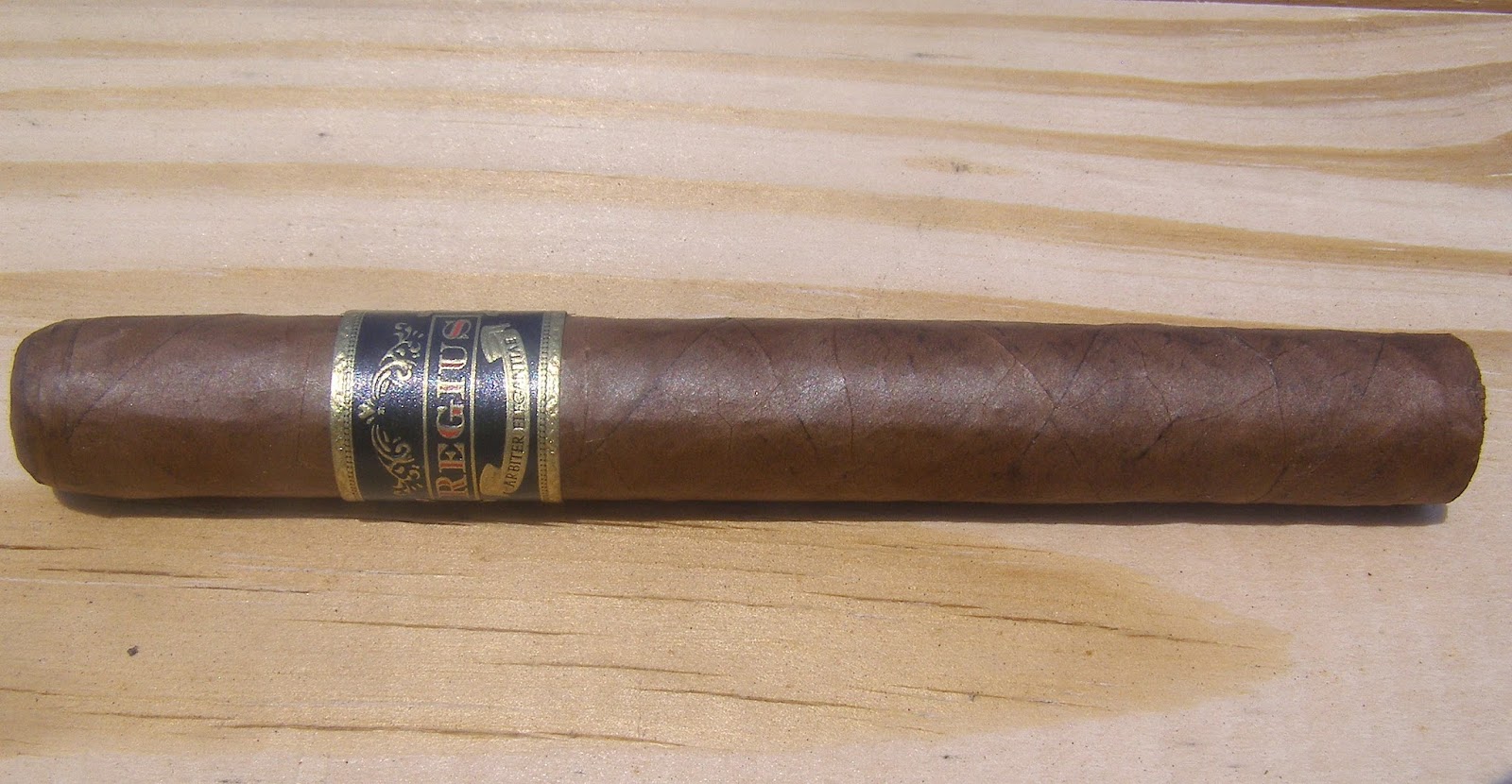 Regius Cigars is a company based in the United Kingdom. A little over two years ago, the company expanded its distribution into the United States. The Regius of London (commonly referred to as the Regius Black Label) was among one of Regius’ first cigars to come stateside. The company entered into a distribution agreement with S.A.G. Imports (now Quesada Cigars) and slowly began moving its product into select retailers.

The Black Label is a Nicaraguan puro with the Corona size measuring a classic 5 1/8 x 42. This cigar brings the worlds of smoothness and spice together – which I know sounds strange. It has wonderful notes of cocoa, earth, and nut – and at the same time it has a wonderful pepper flavor that I describe as “black pepper plus”. The cigar is well balanced in terms of strength and body – starting out medium and by the last third progressing to medium to full.

The Corona size was definitely a standout size for this blend. 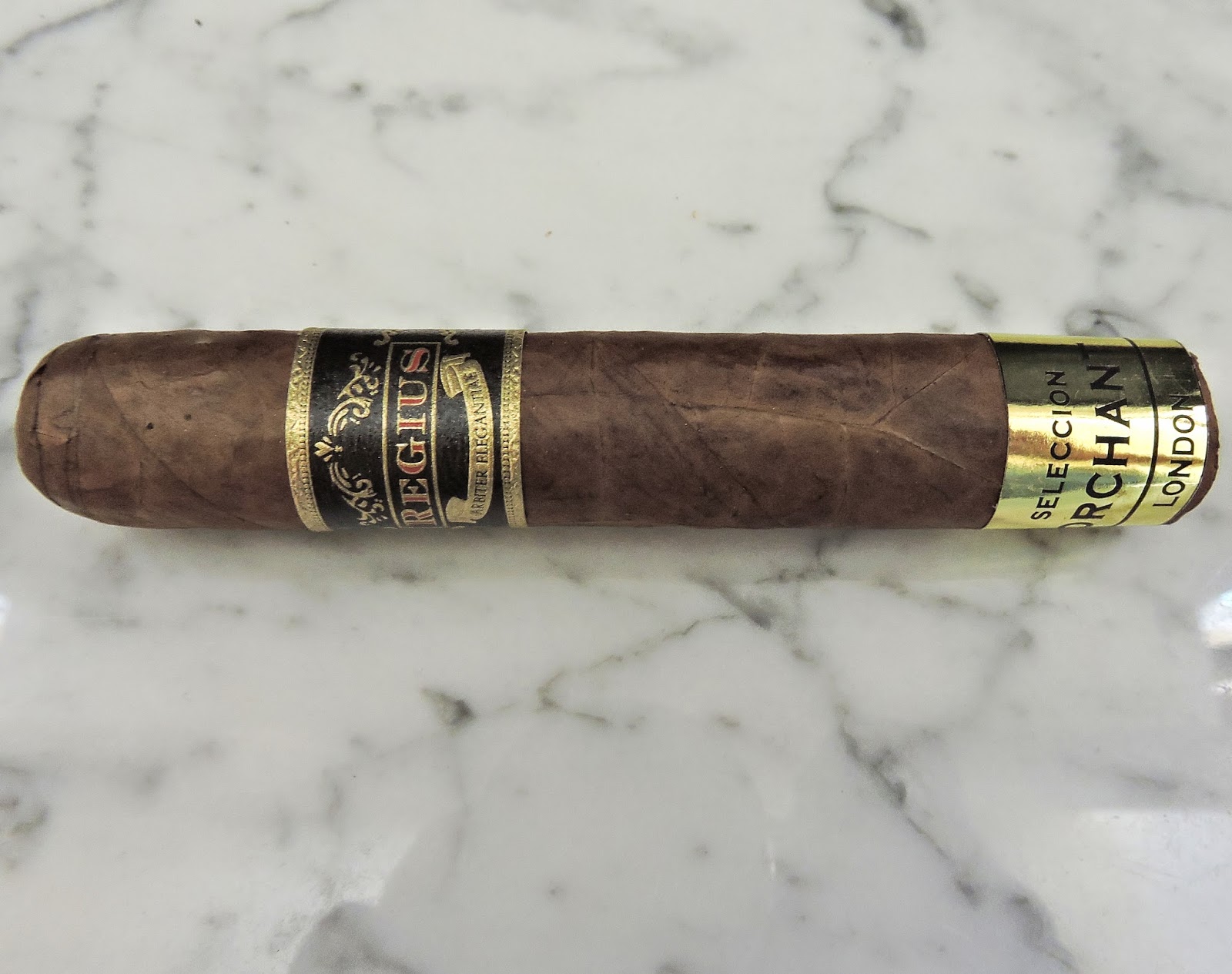 The Regius Seleccion Orchant is a collaboration done between Regius Cigars and Mitchell Orchant of Alfie Turmeaus Tobacconist in the London, England. Regius founder Akhil Kapacee has taken a unique approach by building some releases that are collaborations with some leading retailers. The Seleccion Orchant was introduced in 2013 in a robusto format measuring 4 3/4 x 52. It returned in 2014 where it will be an annual limited production release where a second size was added.

The Seleccion Orchant has a unique flavor of milk chocolate, cream, pepper, and malt. There is a nice Nicaraguan twang also present on this cigar. The Seleccion Orchant is smooth and flavorful throughout the smoking experience. The flavors are medium to full-bodied countered by medium strength.

Overall this is a unique cigar that is quite enjoyable.