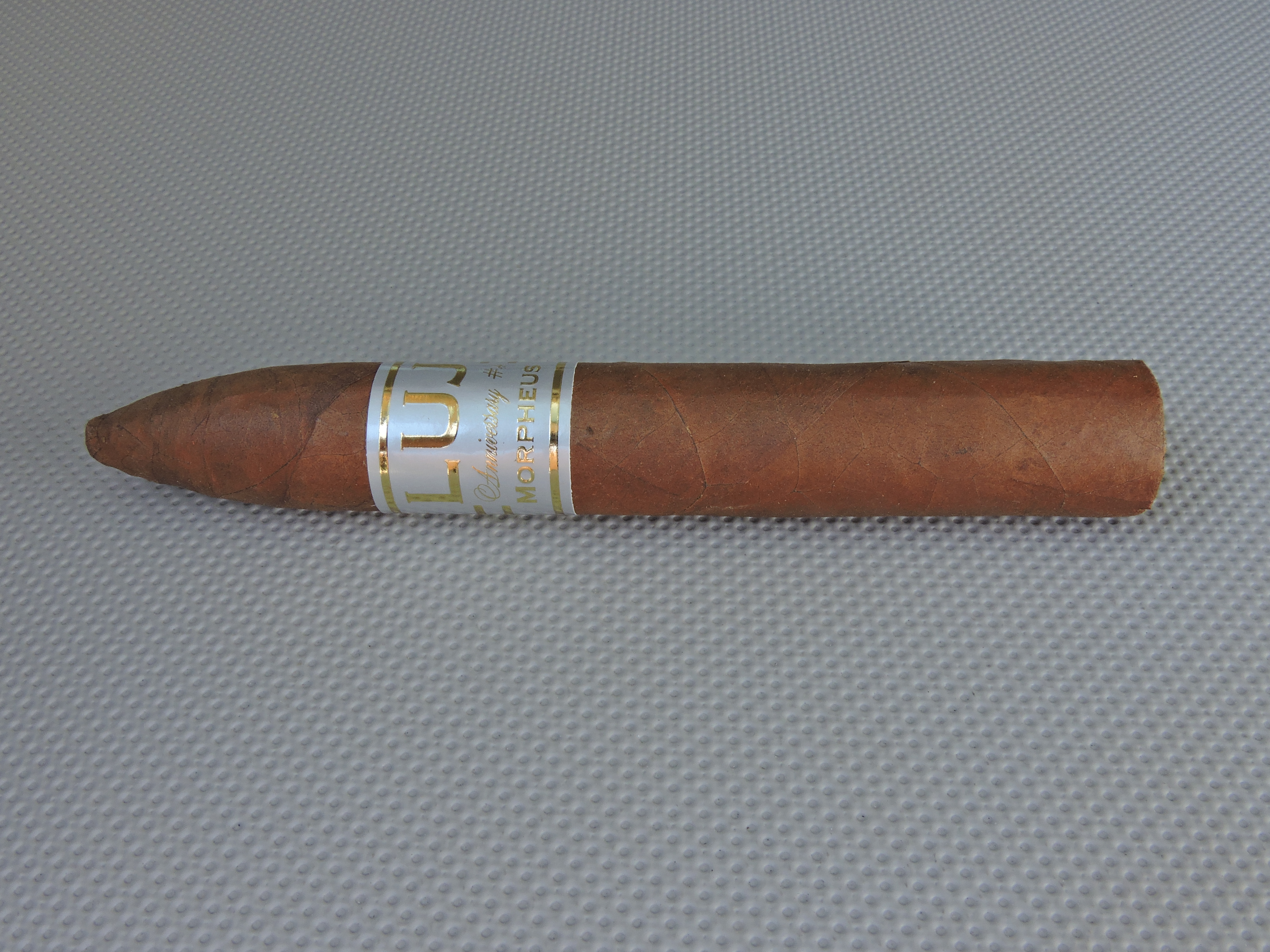 LUJ Cigars’ follows a small batch model, where its lines are built on finite supplies of tobacco. Once the supply of tobacco becomes exhausted, they make adjustments to the blends and tweak the name of the cigar. The LUJ Morpheus Anniversary line follows this model.  It is a line that has been around for a while, but the LUJ Morpheus Anniversary #4 represents the latest iteration of this line. Down the road, once tobacco supplies are exhausted with this line,  it is quite possible the blend will be adjusted and the name tweaked again again.

Without further ado, let’s take a closer look at the LUJ Morpheus Anniversary #4 Natural Belicoso and see what this cigar brings to the table.

The company does not disclose details of the tobaccos in their blends. As mentioned, LUJ Cigars are produced out of the Dominican Republic.

The LUJ Morpheus Anniversary #4 Natural and Maduro are offered in the same sizes. LUJ has recently announced its fifth vitola in the line, a  5 x 54 Robusto.  Each of the five sizes are packaged in 20 count boxes.

The wrapper to the Anniversary #4 Natural Belicoso had a medium brown color with a cinnamon tint to it.  Upon closer examination, some darker marbling can be seen on the surface of the wrapper. There are some thin wrapper seams as well as some thin veins visible on the surface.  The belicoso tip has what I would term a “medium level” tapering effect (falling in-between a gentle and steep taper).

The band has a platinum color with a gold-colored font. Prominently displayed on the upper half of the band is the text “LUJ”. Just below it is the text “Anniversary”(in cursive) “#4″. Below that is the text “MORPHEUS”. There are four stripes on the band: one on the top, one on the bottom, and two flanking the left and right of the “Anniversary #4″ text.

Before lighting up the LUJ Morpheus Anniversary #4 Natural Belicoso, I went with a straight cut and clipped about half of the belicoso tip off.  I then proceeded with the pre-light draw.  The dry draw delivered notes of coffee, nut, and a light tingly cedar-like spice.  Overall I considered this pre-light draw experience to be excellent.  At this point I was ready to light up the Anniversary #4 Natural Belicoso and see what the smoking phase would have in store.

The LUJ Morpheus Anniversary #4 Natural Belicoso started out with a quick blast of white pepper and cedar sweet-spice.  As the spices subsided into the background, notes of coffee and nut emerged as primary notes.  At the same time, while the cedar and pepper spices had diminished on the tongue, they will prominent on the retro-hale.

Later in the first third, the coffee and nut remained as the primary notes.  Some cream notes surfaced in the background joining the spice notes.  I found the combination of the cream and spice to complement each other nicely and add to the complexity of this cigar.  As the Anniversary #4 Natural Belicoso moved through the second third, the spices moved toward the forefront.

By the last third, I found the spices to be the primary flavor while the nut, coffee, and cream notes were in the background.  This is the way the Anniversary #4 Natural Belicoso remained until the end.  The resulting nub was soft to the touch, but cool in temperature.

The burn of the Anniversary #4 Natural Belicoso scored very well.  The burn path remained straight from start to finish.  The burn line did have a slight jaggedness to it, but this was quickly remedied by some touch-ups.  The resulting ash was tight and firm coming off the cigar in nice clean chunks.  The ash also had a nearly white color.  The burn rate and burn temperature were both ideal. 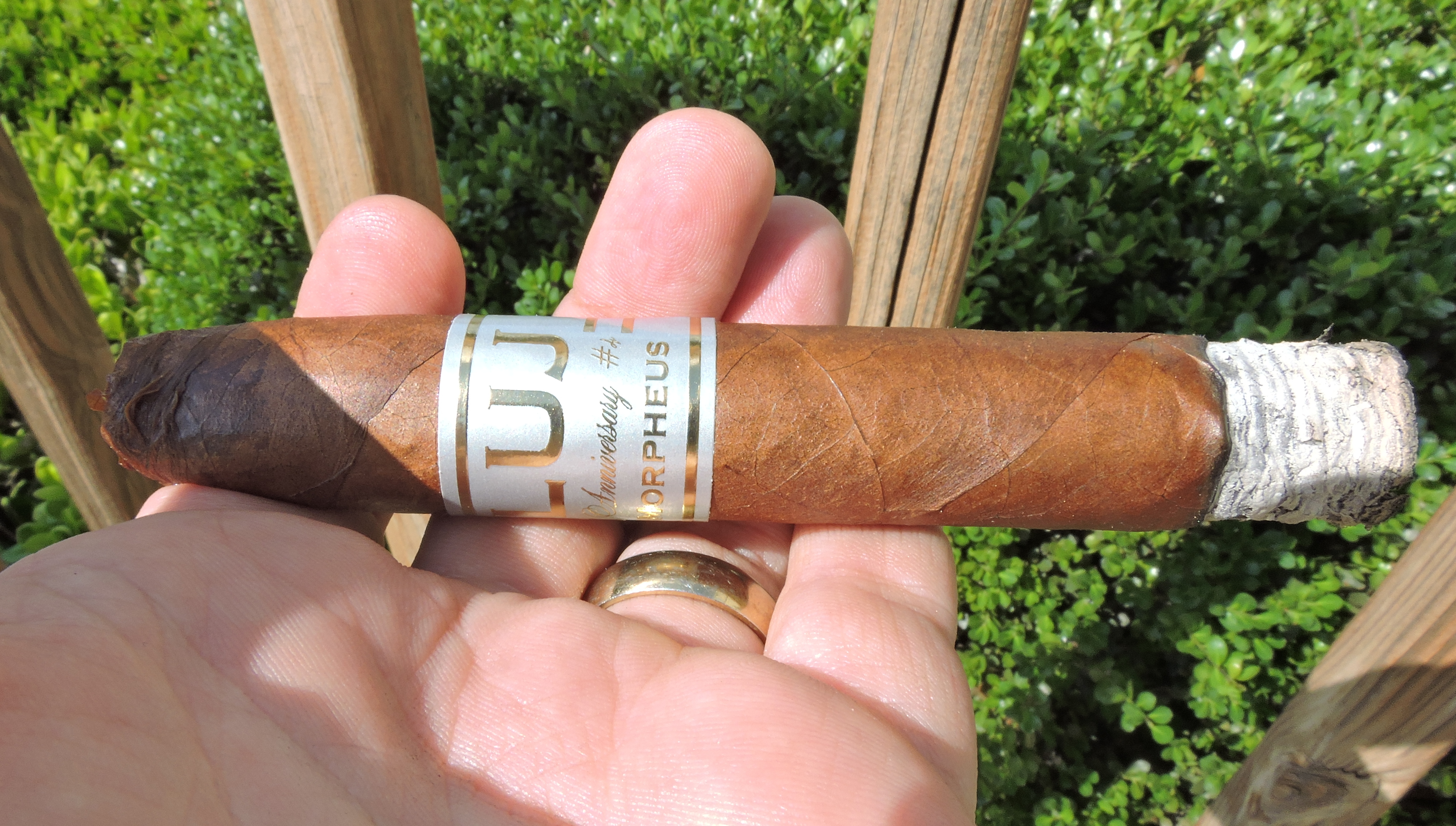 For a Belicoso, I was very impressed with how the draw of the Anniversary #4 Natural Belicoso performed.  I found the draw to have just a touch of resistance – which is something I like on a draw.  The belicoso tip performed quite well and did not get overly soft.

Last month, when I smoked the LUJ Morpheus Anniversary #4 Maduro, I was quite impressed.  My experience with its Natural counterpart is equally satisfying.  Not only does the Natural deliver excellent flavor, but it has a rich and smooth profile which brings out the flavors even better.  Like the Maduro, I found the medium strength and body of the Natural worked perfectly with the flavors delivered.

With LUJ Cigars planning on expanding its footprint at the 2015 IPCPR Trade Show, this is definitely a cigar to look out for in your local humidor.  This is a cigar that I would recommend to either a novice or an experienced cigar enthusiast.  As for myself, this is absolutely a cigar I would smoke again – and its certainly worth of a box purchase.