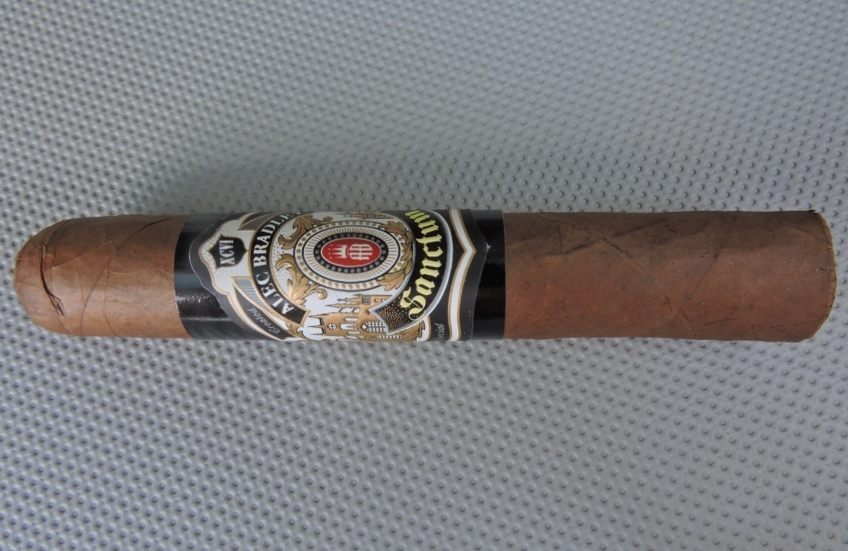 The Sanctum draws on the theme – where do you escape and where do you find peace?  This is a theme that typically resonates with cigar enthusiasts.  This is the first regular production release in 2015 for Alec Bradley.

Without further ado, let’s take a closer look at the Alec Bradley Sanctum and see what this cigar brings to the table.

The blend for the Alec Bradley Sanctum is a four country multi-national blend.  While the cigar features a Honduran Corojo wrapper, it is perhaps the Costa Rican binder and Colombian tobacco in the filler that is most intriguing.  The cigar was blended by Alec Bradley’s Ralph Montero.

The Alec Bradley Sanctum is available in four sizes. Each are packaged in 20 count boxes.

The Honduran Corojo wrapper of the Alec Bradley Sanctum has a coffee bean colored wrapper. Depending on how the light shines on it, there may be a colorado red tint to the wrapper’s color.  The surface of the wrapper has some darker marbling on it.  There is a light coating of oil on the wrapper.  There are also some visible veins, but the wrapper seams on the thin side.  I’d still consider this to be a smooth wrapper.

There are two bands to the Alec Bradley Sanctum – an inner and an outer band.  The inner band is solid black while the inner one has an intricate design in the style Alec Bradley has know for. At the center of the inner band is the Alec Bradley “AB” red badge logo.  The red badge is surrounded by gold, and black oval rings.  The remainder of the band is adorned with black, gold, and white silver design featuring gold cathedral and pegasus designs.  Above the oval rings is the text “ALEC BRADLEY” in white font arranged in a curved fashion on a black background. Below the oval ring is the text “Sanctum”” in bright yellow font on a black ribbon background. At the top of the band is a black shield with the text “XCVI” (1996 – year Alec Bradley was founded) – in white font. There are four black ribbons on the four corners of the front of the band with gray colored cursive text. The text on the ribbons are: “Created” (upper left), “For Those” (upper right), “Special” (lower left), “Moments” (lower right). The band also features black trim across the top and bottom.  There is also a smaller Alec Bradley “AB” red badge on the back.   To the far right of the band it says “LIVE TRUE” in  small red font.

Prior to the lighting up my Alec Bradley Sanctum Robusto, I went with a straight to remove the cap.  Once the cap was successfully clipped, I moved on to the pre-light draw.  The dry draw started out with a mix of sweet natural tobacco and subtle fruit sweetness.  As the pre-light draw progressed it gave way to notes of wood and mixed pepper.  Overall I considered this to be a very good pre-light draw.  At this point I was ready to light up the Alec Bradley Sanctum and see what the smoking experience would deliver.

The Alec Bradley Sanctum Robusto started out with notes of natural tobacco that had a touch of fruit flavor mixed in.  I also detected some nut flavors.  In addition, there were secondary notes of black pepper and wood.  During the first third the sweetness and nut flavors alternated in intensity.  Meanwhile there was a gentle (i.e. not sharp) black pepper on the retro-hale.

During the second third, the nut flavors became primary.  The natural tobacco and fruit notes moved into the background joining the black pepper and wood notes.

As the Sanctum moved through the latter part of the second third, I found the wood and pepper notes increased and moved to the forefront.  The pepper had some baker’s spice mixed into it.  The nut flavors moved into the background.  I also still was able to pick up some additional natural tobacco notes.  This is the way the flavor profile held until the end. There was some spice at the end of the cigar, but there was no harshness. The resulting nub was firm to the touch and cool in temperature.

Overall I found the Alec Bradley Sanctum to be a well-constructed cigar and this reflected nicely on the score of the burn and draw.  The burn remained relatively straight from start to finish.  The burn line also was relatively straight – requiring minimal touch-ups along the way.  The resulting ash was somewhat firm and came off the cigar in nice clean chunks.  The ash itself had a nice salt and pepper color to it.  The burn rate and burn temperature were both ideal.

I also found the draw to be excellent.  It had a touch of resistance to it – which is something I like.  This made the Alec Bradley Sanctum Robusto an enjoyable cigar to smoke.

From a strength perspective, I didn’t find the Sanctum to be an overpowering cigar. I assessed the strength level as medium from start to finish.  As for the flavors, I found they started out medium-bodied.  There was a gradual increase in strength and by the second half, the Sanctum was delivering medium to full-bodied notes.  In terms of strength versus body, I found both attributes were even during the early stages, but by the midway point, I found the body had the edge.

Overall I found the Alec Bradley Sanctum to be an enjoyable smoke.  I particularly liked the sweetness this cigar delivered with this cigar as it definitely seemed to give this cigar its own identity.  While I liked the fact this cigar did change up along the way, I preferred the first half of this cigar better than the second half.  As mentioned up front, this is a great cigar to put in your rotation.  This is a cigar I’d recommend to either a novice or experienced cigar enthusiast. As for myself, this is a cigar I’d easily smoke again. I am also curious to see how this cigar smokes in the larger ring gauges.  This is a cigar worthy of a five pack.