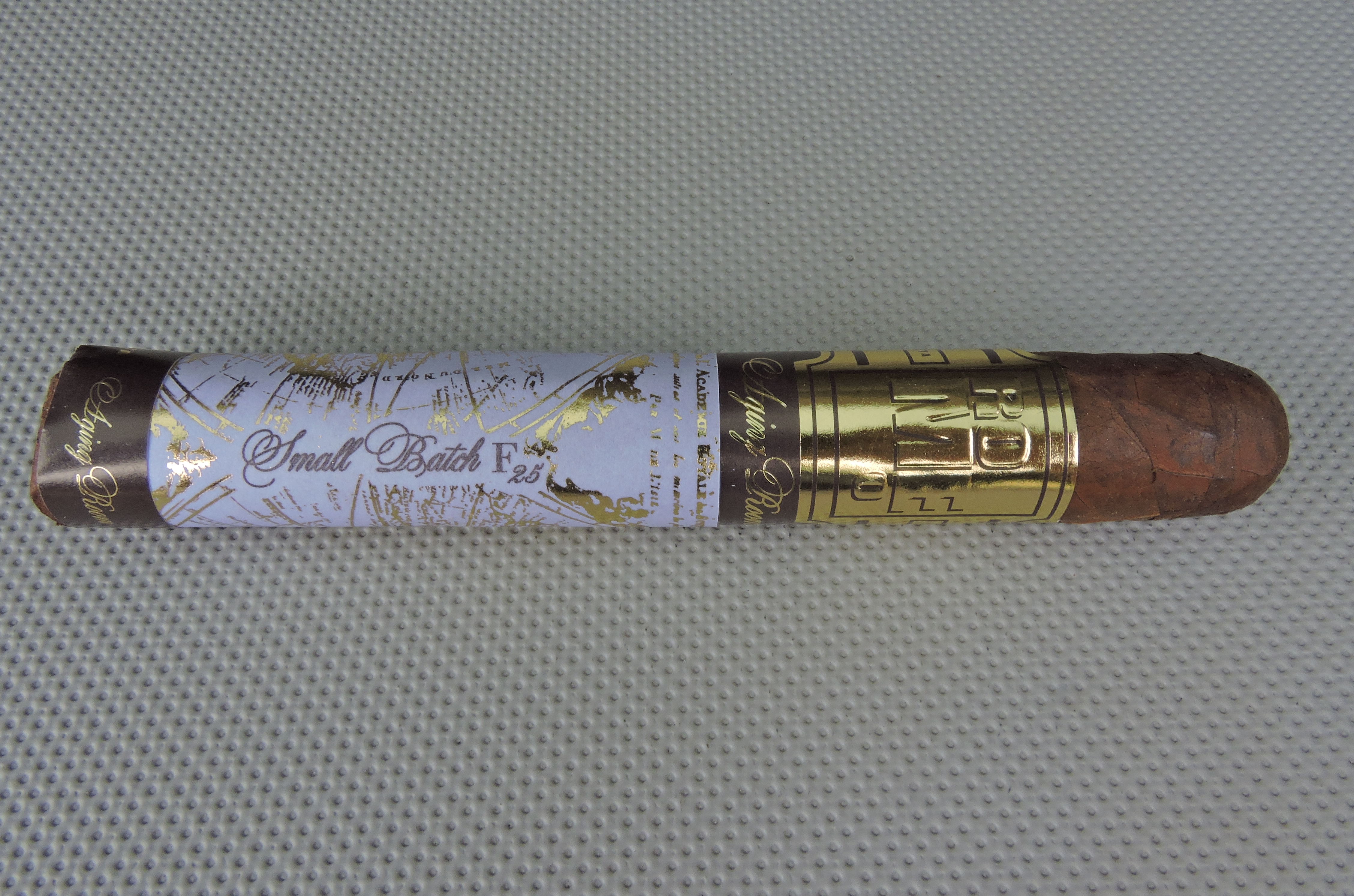 In terms of the project, the cigar is produced at Boutique Blends’ manufacturing partner Tabacalera Palma.  During the production process, the famed Altadis Grupo de Maestros played a key role in the cigar’s development.  This is a highly skilled team that has 140+ years of tobacco experience.  In a recent conservation we had on Stogie Geeks Shorts with Boutique Blends President Rafael Nodal, he described interacting with this team as a great learning process.

While the cigar is being distributed by Altadis USA, Nodal has been actively promoting this cigar – including participating in the cigar’s national launch in Charlotte, North Carolina. Consistent with Atladis’ strategy around the Romeo by Romeo y Julieta line, it will only be sold at brick and mortar cigars.

Without further ado, let’s take a closer look at the Romeo by Romeo y Julieta Aging Room Small Batch F25 Capriccio and see what this cigar brings to the table.

As mentioned the Romeo by Romeo y Julieta Aging Room Small Batch F25 is a Dominican puro and features tobaccos from the Cibao Valley. The tobaccos come from two farms in that valley – La Canela and Jacagua.  The F25 designation on the band refers to “Friday, the 25th day of the year” as for when the blend was created – a designation often seen throughout the Aging Room Cigars portfolio.

Consistent with many of Boutique Blends’ naming conventions, the vitola names have a musical theme to it.

The Dominican wrapper to the Romeo by Romeo y Julieta Aging Room was a nice thick and oily wrapper.  The wrapper had itself had a cinnamon color to it.  Upon closer examination there is some darker marbling on the surface.  The surface of the wrapper had a bit of a bumpy feel to it.  There were some visible veins, but there were also some thin wrapper seams. 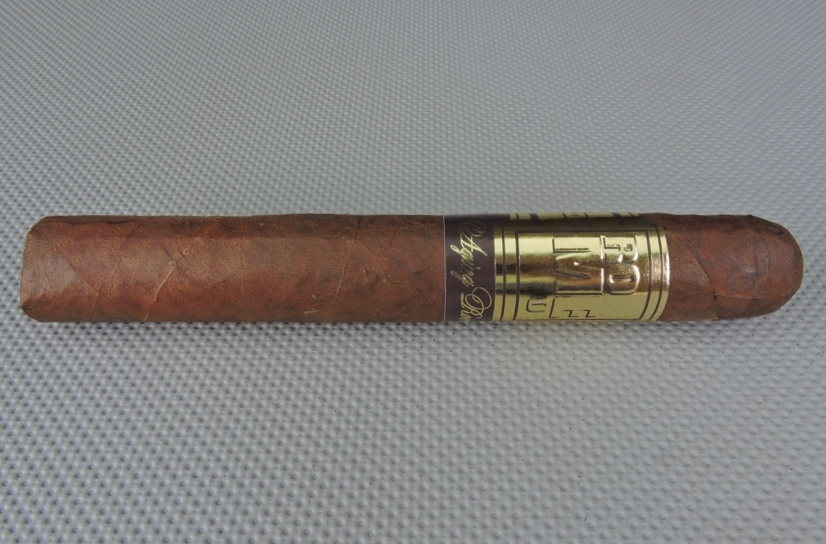 The primary band is a gold on gold version of the Romeo by Romeo y Julieta band.  The band features the text “RO” in large gold font  Under that text is the text “ME”in larger gold font.  Finally, under that text and offset to the right (just under the “E”) is the text “O” in the smallest gold font.  The text is surrounded by a thin brown rectangular trim.  There are also some additional brown striping on the band.  The text “ROMEO Y JULIETA” appears in small brown font to the left and right of the “ROMEO” square.  There is a thick brown trim on the lower part of the band.  On that trim is the text “Aging Room” in cursive.

From the band to the footer, there is a parchment sleeve that covers the cigar.  There is an globe-like design in gold printed on the parchment.  In the middle of the design is the text “Small Batch F25”.  Finally there a brown colored footer band.  It contains the text “Aging Room” in gold cursive font with the text “ROMEO Y JULIETA” in gold font to the left and right.

As I normally do, I went with a straight cut to remove the cap of the Romeo by Romeo y Julieta Aging Room Capriccio.  Once the cap was removed, I moved on to the pre-light draw.  The dry draw provided notes of sweet natural tobacco along with subtle notes of cedar and red pepper.  Overall I considered the pre-light draw of the Romeo Aging Room to be excellent.  At this point I was ready to light up this cigar and see what the smoking

The Romeo Aging Room Capriccio opened up with notes of red pepper, baker’s spice, natural tobacco, and a sweetness that is a cross of cherry and raisin.  As the flavor profile took form, the natural tobacco took on some cinnamon qualities and moved into the forefront.  These flavors were joined by the cherry / raisin sweetness.  Meanwhile the pepper and baker’s spice were background notes on the palate, but more prominent on the retro-hale.

By the start of the second third, the Romeo Aging Room the natural tobacco / cinnamon combination remained primary.  The cherry / raisin sweetness joined the spices in the background.  At the same time some bready notes also surfaced as background notes.

During the last third, I saw the baker’s spices and pepper move toward the forefront.  The spices never quite got overpowering.  The Romeo Aging Room remained flavorful right until the end.  The resulting nub was firm to the touch and cool in temperature.

I was able to keep a straight burn line on the Romeo Aging Room Capriccio, but it did require some work.  During the early stages, the burn was low maintenance, but as the cigar experience progressed, it did require more frequent touch-ups than I prefer.  The resulting ash had a charcoal gray color.  The ash was on the firmer side, and was not prone to flaking.  As for the burn rate and burn temperature, these attributes both performed ideally. 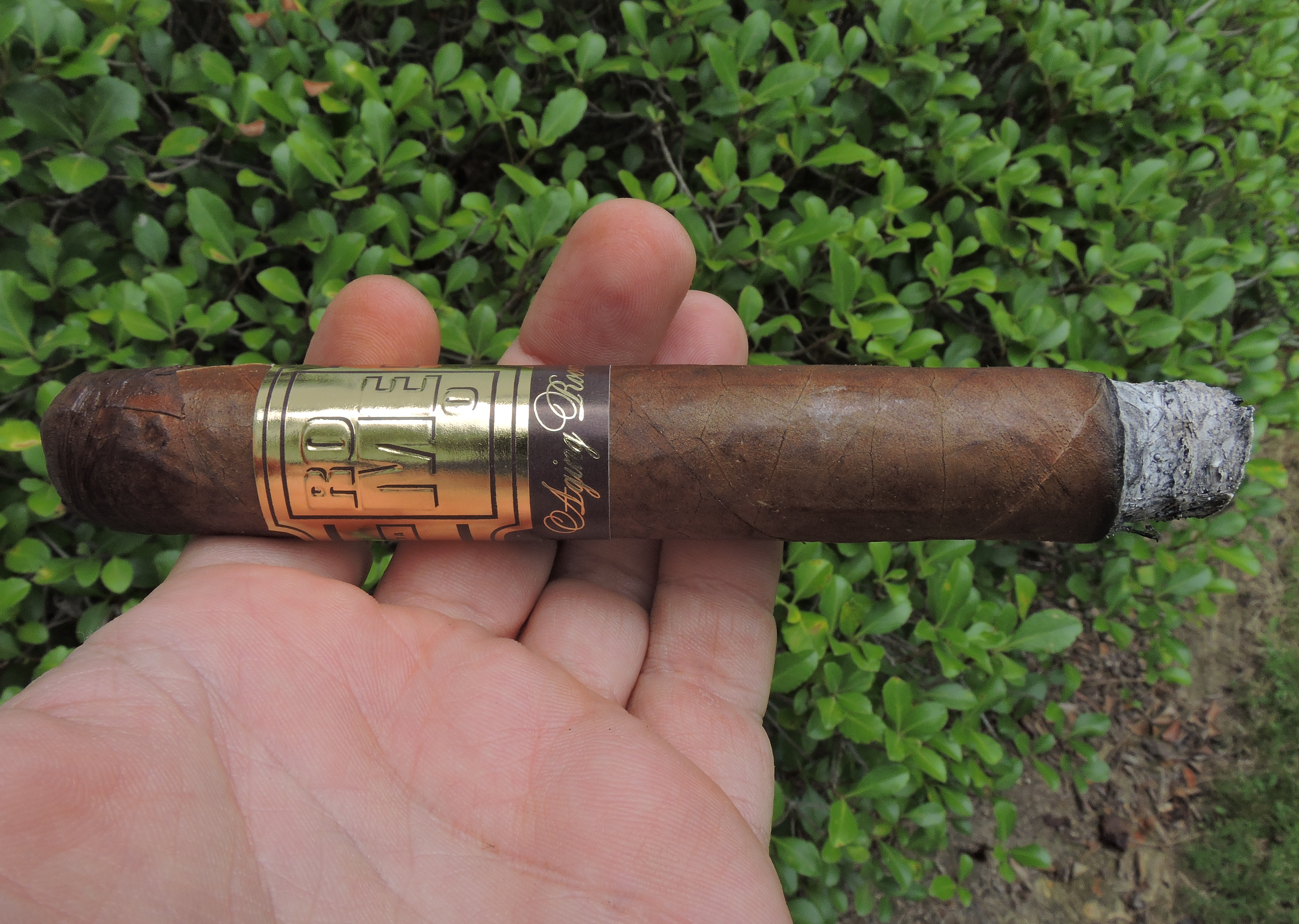 Overall I found the draw to be outstanding.  There was a touch of resistance – which is something I normally like.  At the same time, I found Romeo Aging Room Capriccio delivered an abundant nice layer of smoke.

As for body, it followed a very similar pattern.  The Romeo Aging Room started out in the medium to full-bodied range. By the latter part of the second half, the body increased in weight on the palate and the cigar progressed to full-bodied.

I found this to be a collaboration to be beneficial to both parties.  It allows Boutique Blends to leverage Altadis’ powerful distribution market and land into stores the company might not previously be in.  Meanwhile it allows Altadis to show they are meaner, leaner, and more agile by working with a small batch model like Boutique Blends.  The key that makes this all work is that the collaborative effort delivers one outstanding blend.  I also feel there is some great aging potential down the line for this cigar. This is probably a cigar I’d recommend to a more experienced cigar enthusiast as it is stronger and fuller than I’d recommend as a novice.  As for myself, this was an enjoyable cigar – and its one I’d certainly smoke again.