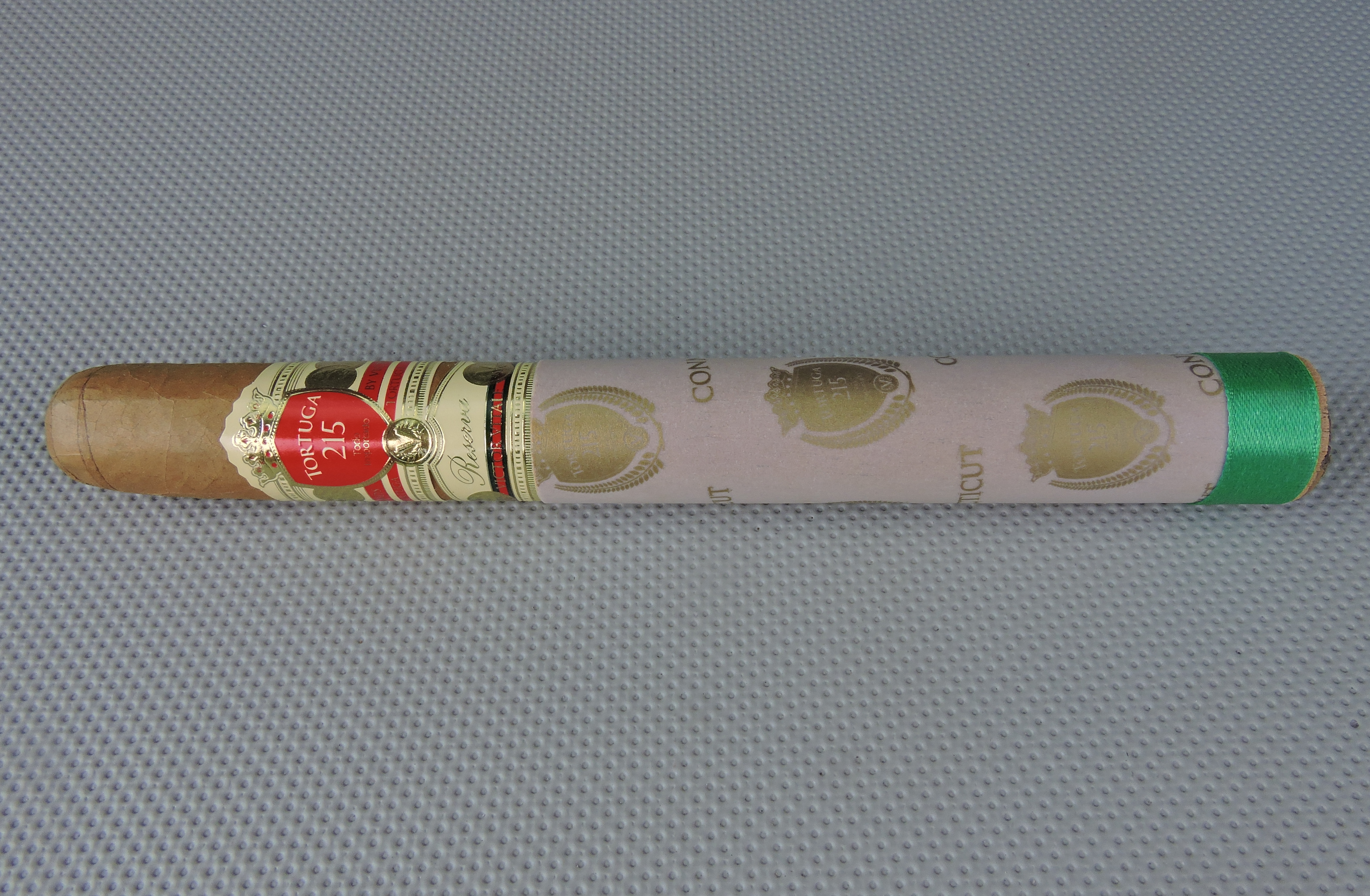 In terms of the Tortuga 215 Reserva cigar name, Vitale told me it was his father who came up with the Tortuga name. Tortuga is Spanish for “turtle”. Vitale felt the name was very appropriate for the brand in terms of the focus on quality and not rushing a product to market. As for the 215 in the name, this is a tie to Vitale’s roots in the city of Philadelphia. 215 represents the area code for the city.

Without further ado, let’s break down the Tortuga 215 Reserva Connecticut and see what this cigar brings to the table.

The Tortuga 215 Reserva Connecticut is offered in three sizes – each are packaged in 30 count boxes.

The Tortuga 215 Reserva Connecticut Regios has a light brown wrapper with a slightly weathered look to it.  The wrapper has a light coating of oil on it.  I would categorize the surface of the wrapper being slightly bumpy.  There are thin visible veins, but most of the wrapper seams are well hidden.  I found the cigar itself to be well-packed with no soft spots.

While the Tortuga 215 Reserva Connecticut appears to have two bands, it is actually a single band that is actually interconnected. This is the same band currently used across the rest of the Tortuga 215 line. The upper portion of the band has a pale yellow, gold, red, and white color scheme. This portion of the band features a red shield with the text “TORTUGA 215” in light font. Just below that text is the text “Todo Importado”. There is also a gold crown above the shield. To the left and right of the shield are gold medallions as well as gold and red striping. The red stripe just below the medallions has the text “LEGACY BRANDS” (on the left) and “BY VICTOR VITALE” (on the right) – both in gold font. On a red stripe below that one it says “TORTUGA” in a ticker tape format – also in gold font.

There is a cedar sleeve connects the ribbon to the banding on the upper part of the cigar. Covering the cedar sleeve is a waxy paper sleeve. On that sleeve the Tortuga logo is stamped in gold on the sleeve along w the text Connecticut. 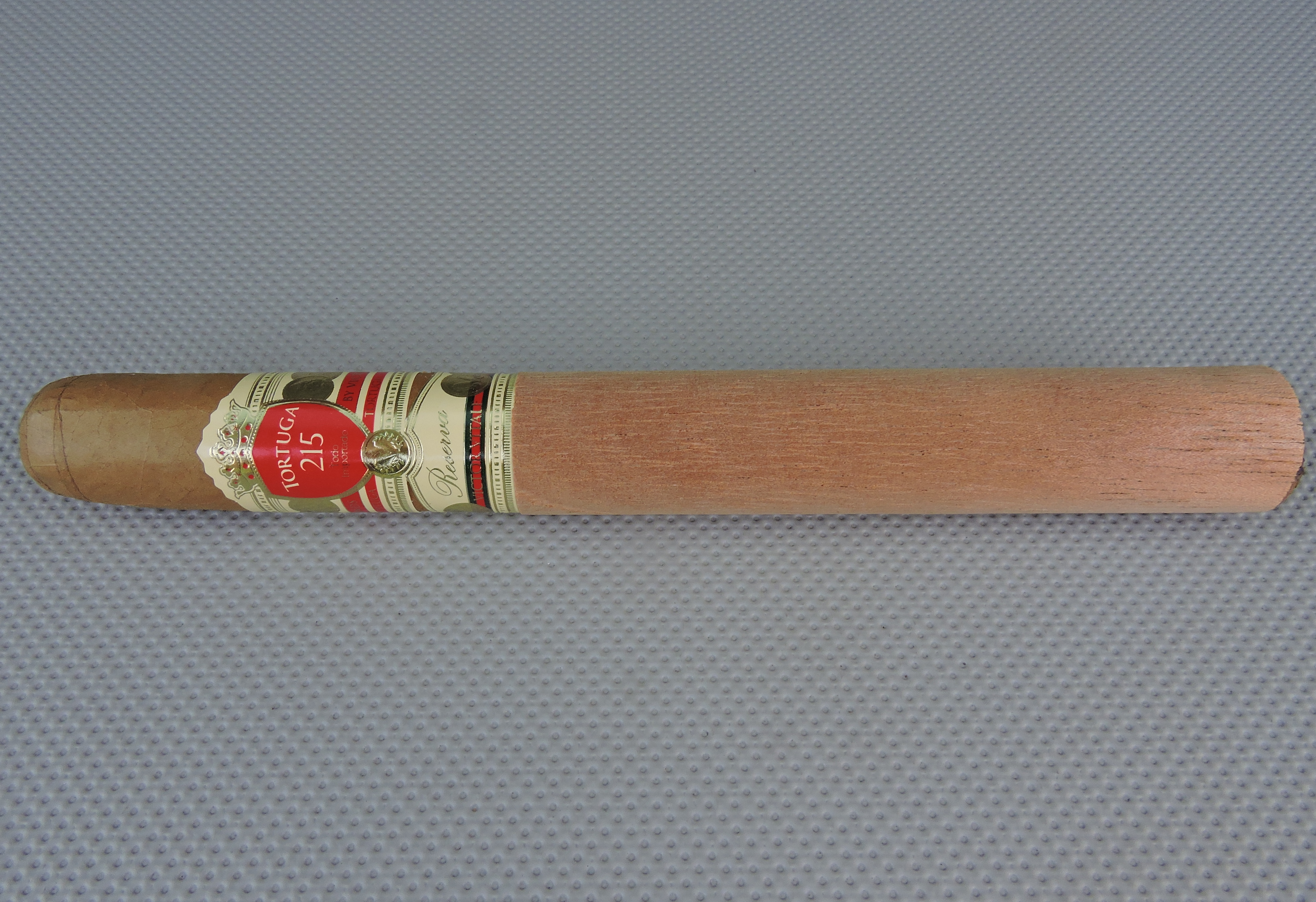 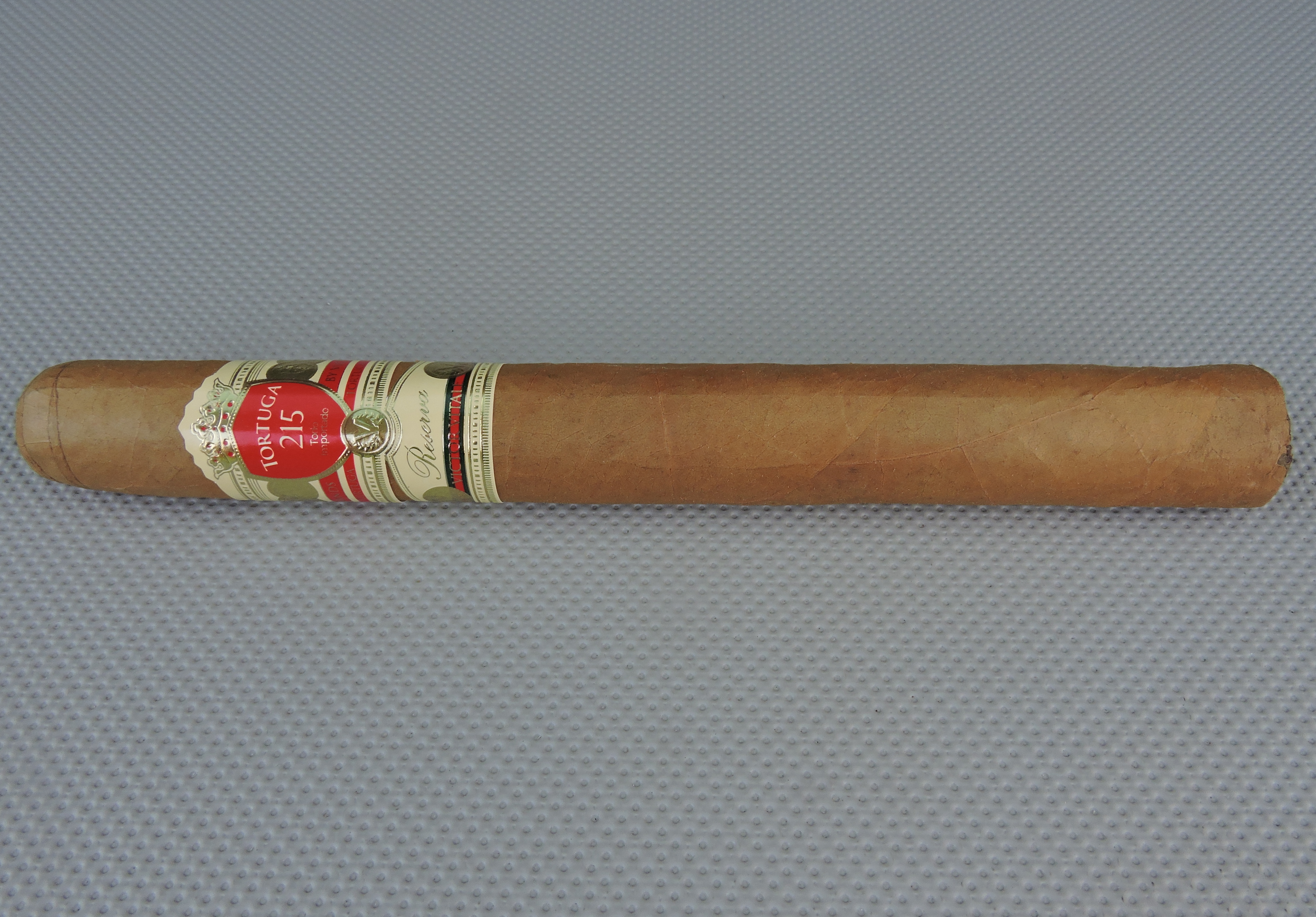 Prior to lighting up my Tortuga 215 Reserva Connecticut Regios, I first removed the ribbon, paper sleeve, and cedar sleeve. After removing these coverings, I proceeded to clip the cap off this cigar using a straight cut. From there it was on to the pre-light draw. The cold draw of the Tortuga 215 Reserva Connecticut Regios was definitely one of a vintage Connecticut Shade cigar – namely lots of generic wood and cream notes. As I progressed with the pre-light draw I detected a mild cedar spice note.  Overall I considered the pre-light draw of the Regios to be satisfactory. At this point, I was ready to light up this cigar and await what the smoking phase would have in store.

The Tortuga 215 Reserva Connecticut Regios began with notes of cream, cedar, generic wood, and citrus.  It didn’t take long for the cream notes to move into the forefront as the primary note. I also found the cedar, wood, and citrus to be secondary notes. Meanwhile a subtle cedar spice was present on the retro-hale.

As the Regios burned through the first half, I found the cream notes remained in control. The cedar and cream were secondary notes, but seemed tailor-made to complement the cream notes. Meanwhile I also picked up a slight grassy note in the far background.

During the second third, I found the cream and cedar were now alternating as primary note. At times, the citrus also crept into the forefront and had a nice synergy with the creamy profile. There still were some notes of generic wood and grass.

By the last third, I found the generic wood and cedar had the edge. There still was a strong creamy component to this cigar. The citrus notes had greatly diminished while the grassy notes remained subtle.  This is the way the cigar experience of the Tortuga 215 Reserva Connecticut Regios came to a close. The resulting nub is firm to the touch and cool in temperature.

Overall the Tortuga 215 Reserva Connecticut Regios burned quite well. The burn path and burn line remained relatively straight from start to finish. I found this was a cigar that needed occasional, but not frequent touch-ups. The resulting ash was charcoal gray with some darker spots in it. The ash was on the firm side and came off the cigar in nice clean chunks. The burn rate and burn temperature were excellent. For a longer, thicker cigar, I found the combustion during this cigar experience to be excellent. 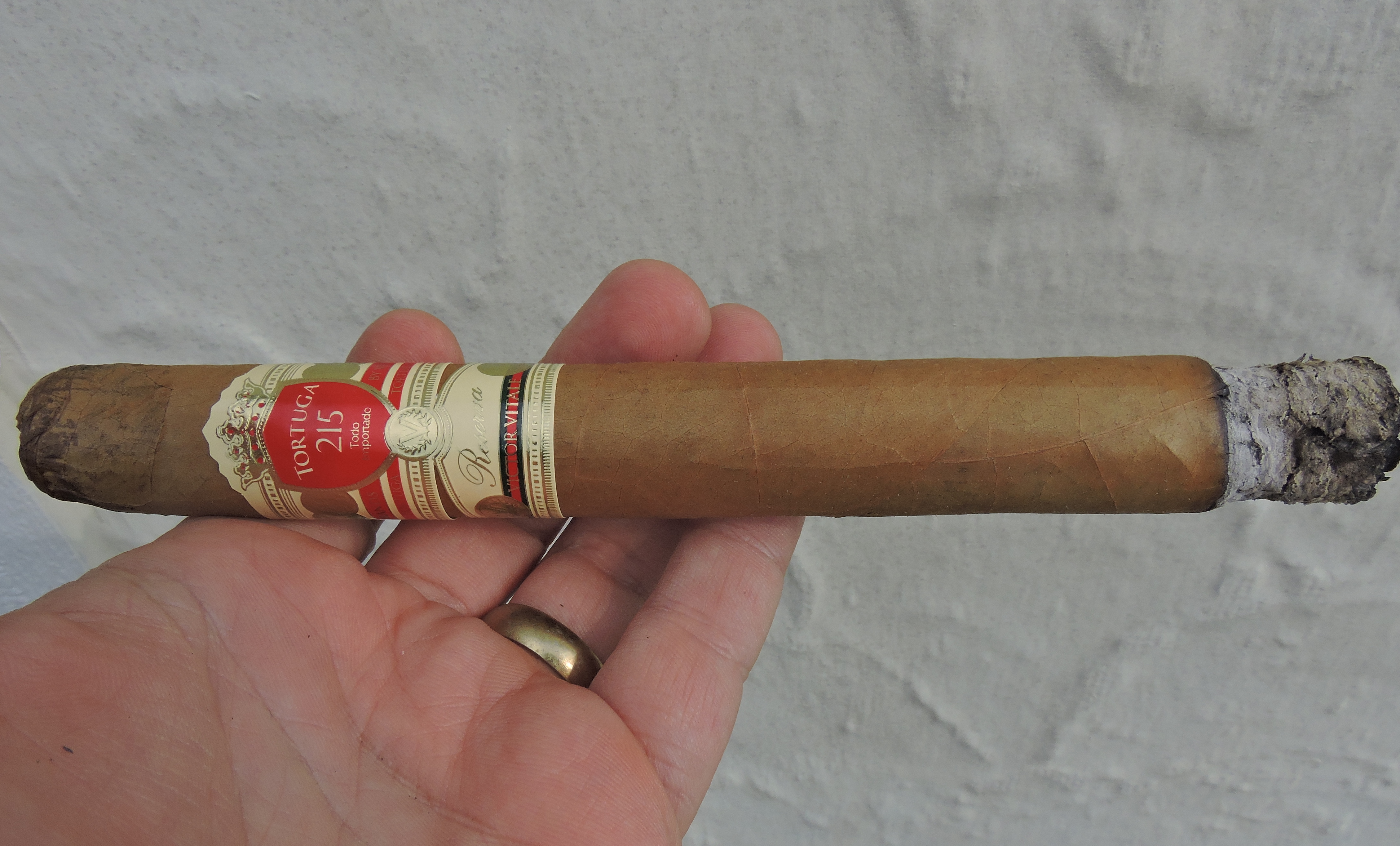 I found the draw to the Tortuga 215 Reserva Connecticut Regios to be very good. This wasn’t an overly loose draw, nor was it overly tight. Overall, despite the size of this cigar, I found it very easy to derive flavors from this cigar.

As mentioned Vitale sought to create a classic Connecticut Shade cigar. When it comes to strength and body, the Tortuga 215 Reserva Connecticut is as traditional as it gets for Connecticut Shade. Overall, this is a cigar that is mild in strength. As for the body, the flavors are subtle, and will not weigh heavy on the palate. I assessed this cigar as being mild to medium-bodied. In terms of strength versus body, I gave a slight edge to the body from start to finish.

The Tortuga 215 Reserva Connecticut Regios is an excellent Connecticut Shade cigar. What I liked about this cigar is how classic it was as far as a Connecticut smokes – namely in flavor, strength, and body. As I mentioned before, it is very hard to find a larger Connecticut Shade cigar. With the 7 x 56 Regios format, this cigar really shines. There was never a point during this cigar experience where I said, “I wish this was in a smaller size.” Despite the bigger format, this is a cigar I would recommend to the novice cigar enthusiast. As for the experienced cigar enthusiasts, this is one I would steer to someone who leans toward milder cigars. As for myself, this is a cigar I’d easily smoke again – and it’s one worthy of a box split.