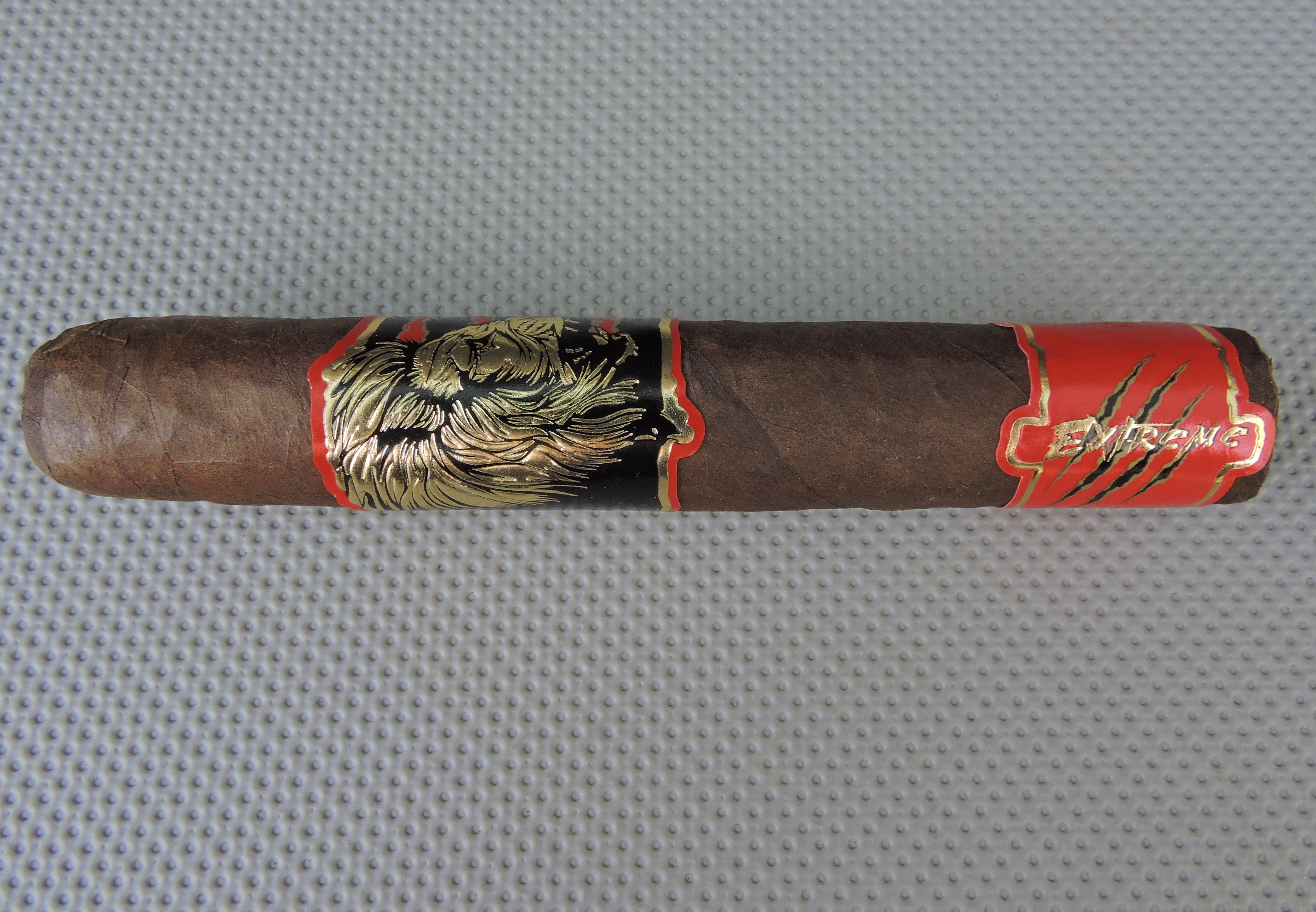 Prior to the 2015 IPCPR Trade Show, La Aurora Cigars announced a second blend as a part of its Untamed line called Untamed Extreme. The original Untamed Cigar made its debut in 2014 and was a significant release for two reasons: 1) It introduced more contemporary “edgier” packaging and banding into the La Aurora portfolio; 2) The cigar itself was positioned as La Aurora’s strongest release to date. With the new Untamed Extreme, the idea here was to go a step further and introduce something stronger and fuller than the original Untamed cigar. The Untamed Extreme has now made it to retailers. Recently I’ve had an opportunity to smoke the Untamed Extreme in the Robusto size. Not only does La Aurora succeed in delivering something more powerful than the original Untamed, but it also delivers a cigar with richer, more-robust flavor.

Last year, on Episode 100 of Stogie Geeks, Miami Cigar and Company President Nestor Miranda was a guest on Stogie Geeks.  It is Miami Cigar who is the U.S. Distributor for La Aurora Cigars and has a very strong partnership with the Dominican-based cigar manufacturer. Miami Cigar played a role in the development of the new packaging and logo. On that show, Miranda gave a little more context about the Untamed by La Aurora:

“We designed a new box for La Aurora. It’s gonna have a bigger, more aggressive lion… When I saw the box in Miami, it impressed me. I said ,let’s show this to (La Aurora President) Guillermo (Leon), said Miranda who added,”They showed it to Guillermo, Jason Wood went to the Dominican Republic and Guillermo loved it…it’s the new lion in La Aurora.” 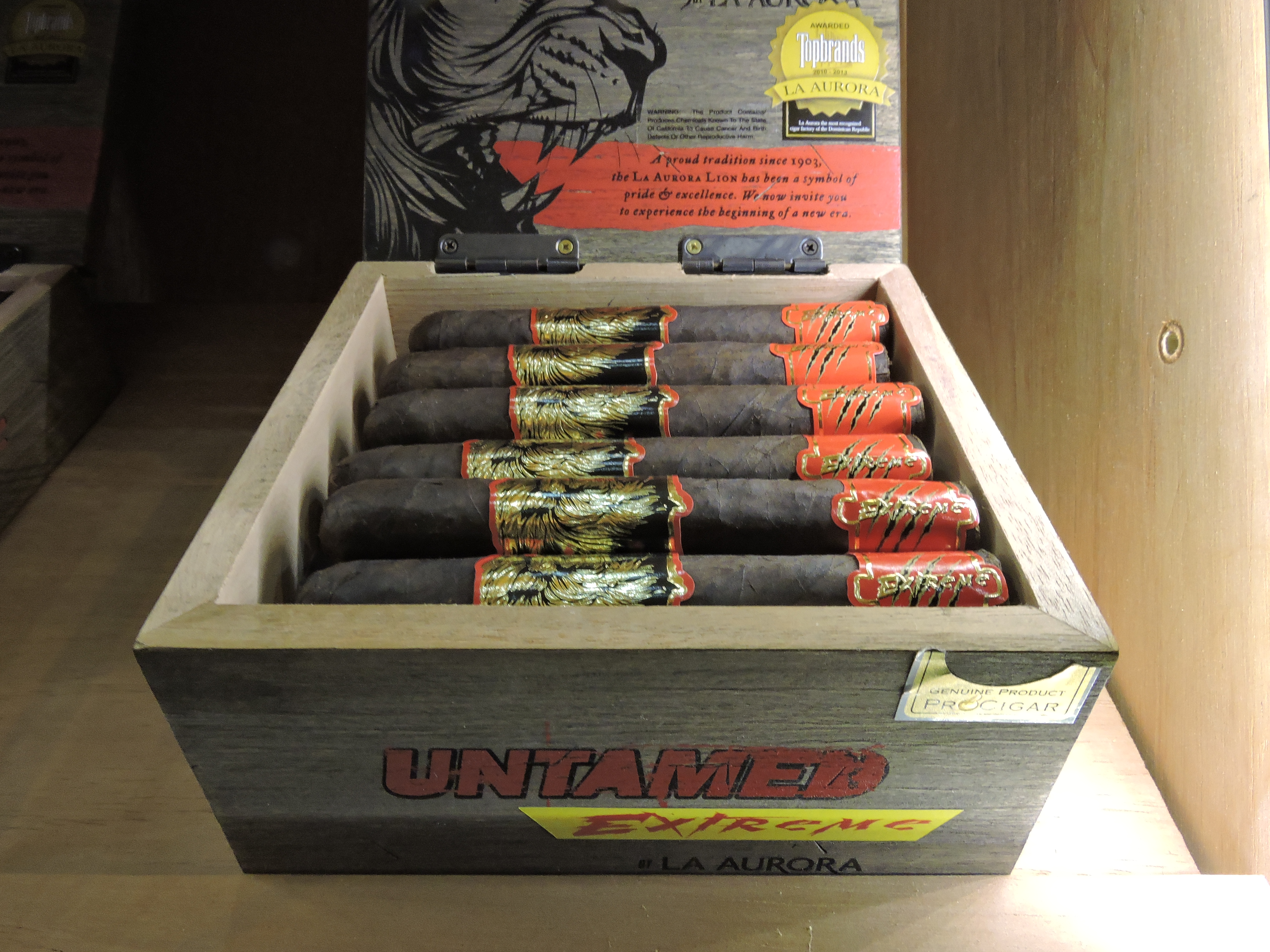 Without further ado, let’s take a closer look at the Untamed Extreme Robusto by La Aurora and see what that cigar brings to the table.

The Connecticut Broadleaf wrapper of the Untamed Extreme Robusto has a rich mocha color. There is a decent coating of oil on the wrapper. There are some thin visible veins, but the dark color of the wrapper does a nice job at hiding the wrapper seams.

There are two bands to the Untamed Extreme. The primary band of the Untamed Extreme is the same as the original Untamed. This band features a black, red, and gold color scheme. The background of the wrapper is black. On the center of the band is a gold colored lion with the bolder,more ferocious look we mentioned above. To the right of the lion are four red claw marks with some gold trim.  On the far right side is the text “UNTAMED” in landscape mode using gold font. On the left side is a gold stripe with a “ripped” like effect. On that stripe is the text “BY LA AURORA” in landscape mode with black font and thin red trim (the text “BY” is much smaller). The edge of the band also has a “rip” like effect with red and gold trim.

The footer band differs on the Untamed Extreme from the original Untamed. The band has a red colored background with gold trim. There are also four gold and black claw marks on the band. Across the claw marks is the text “EXTREME” in landscape mode in gold font. The “E” in “EXTREME” protrudes across the top of the band. Finally the band is trimmed in gold.

Right out of the gate, I got a some a combination of cocoa powder and earth notes. There was more in the way of sweetness to the cocoa notes than the pre-light draw. I also picked up a slight cedar and black pepper spice in the background. There also a mix of sharp red and black pepper notes on the retro-hale.

During the first half, the cocoa notes got quite rich. They developed into a very creamy chocolate note that was quite smooth. The earth notes floated in and out of the forefront. Meanwhile there was still a mix of cedar and pepper spice in the background, but quite prominent on the retro-hale.

By the second half, the primary notes returned to more of a cocoa powder and earth combination. Later in the second third, there was an increase in spice, particularly the pepper. However, the spice never overpowered this blend.  This is the way the Untamed Extreme Robusto came to a close. The resulting nub was outstanding. In fact, each time I was able to nub this nearly to my fingers. The nub was  firm to the touch and cool in temperature.

The burn to the Untamed Extreme Robusto was flawless each time I smoked it. The cigar maintained both a straight burn path and a near straight burn line from start to finish. Along the way, this cigar required minimal touch-ups. The resulting ash was tight and firm with a mostly light charcoal gray color. The ash came off the cigar in nice clean chunks. The burn rate and burn temperature were ideal. Based on the experience of this burn, this cigar earns our “Exceptional” rating for burn. 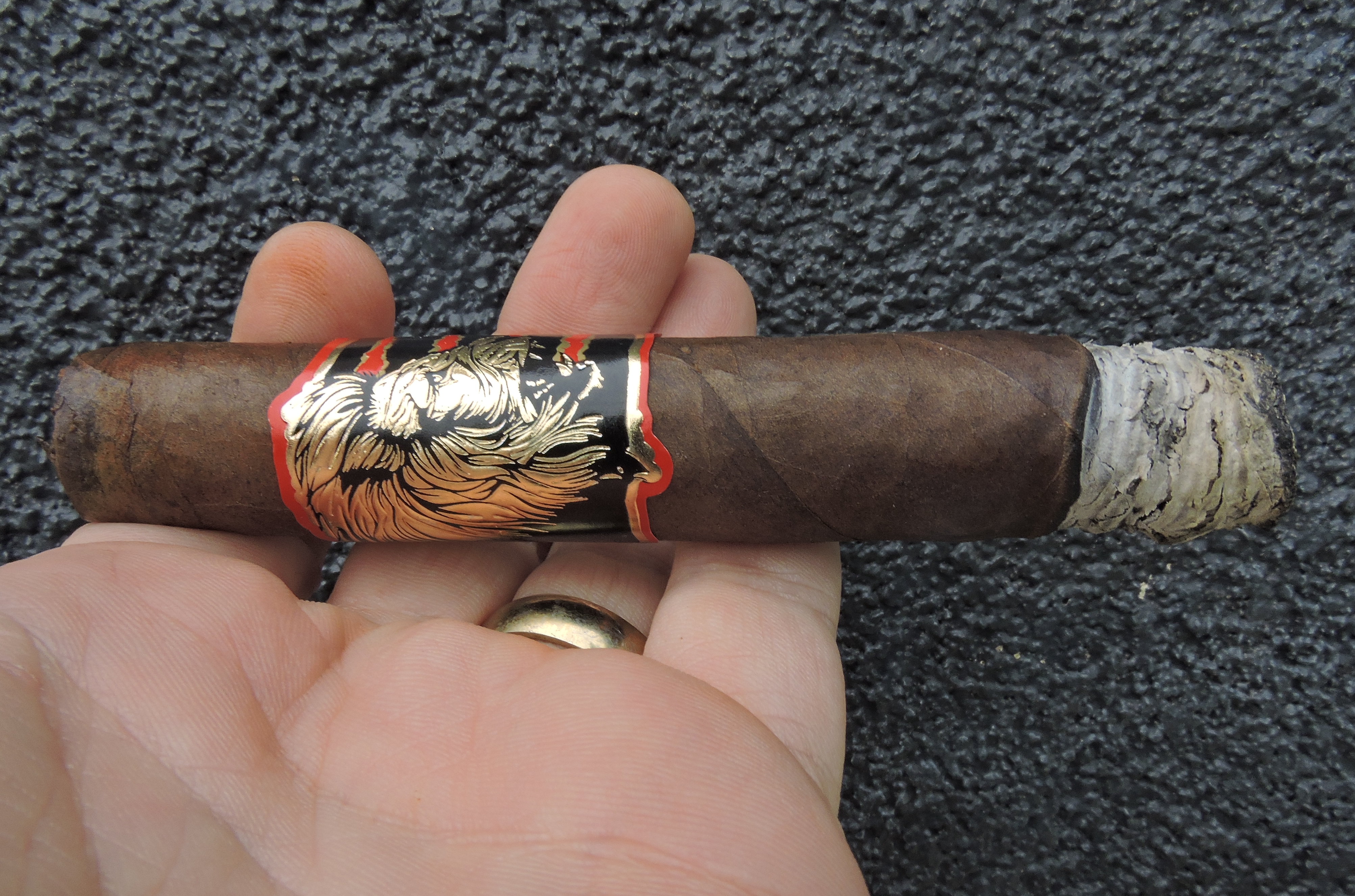 Burn of the Untamed Extreme Robusto by La Aurora

The draw was excellent too. There was a tiny bit of resistance, but this is something I consider a positive. This made the Untamed Extreme Robusto an enjoyable cigar to puff on.

Strength-wise, I still think the limited edition of the La Aurora Preferidos Diamond Chicho’s Choice still ranks as the strongest cigar I have had out of La Aurora.  However, when it comes to regular production, the Untamed Extreme might get that honor.

In terms of strength versus body, both attributes balanced each other nicely.

When the original Untamed was released, I thought it succeeded in delivering a powerful, yet flavorful cigar experience. With the Extreme, while it’s not a huge bump in strength and body, it nonetheless is a bump. However, where the Extreme really shines is that the flavors are much more balanced and the flavors have much more in the way of richness. Finally, this is a cigar that could be smoked right to the nub and will maintain that richness and not develop into a spice bomb. Given this is a powerful cigar in terms of strength and body, I recommend this to a more seasoned cigar enthusiast. As for myself, this is a cigar I would smoke again, and it’s worthy of a box split.