Agile Cigar Reviews replace what we termed “Assessment Updates”. The concept is the same, but the name is different. Agile Cigar Reviews use a lightweight, shorter format. These will never take the place of our comprehensive reviews. They are only used on blends we have previously assessed. This might be a blend we are re-scoring or providing a score for a first time. It might be a blend we are looking at in a different size. Today we look at the La Bohème Encantador by Boutique Blends Cigars in the Fenice (Torpedo) size. This is a cigar we did a pre-release assessment back in August, 2015 in the Turin (Corona) size. 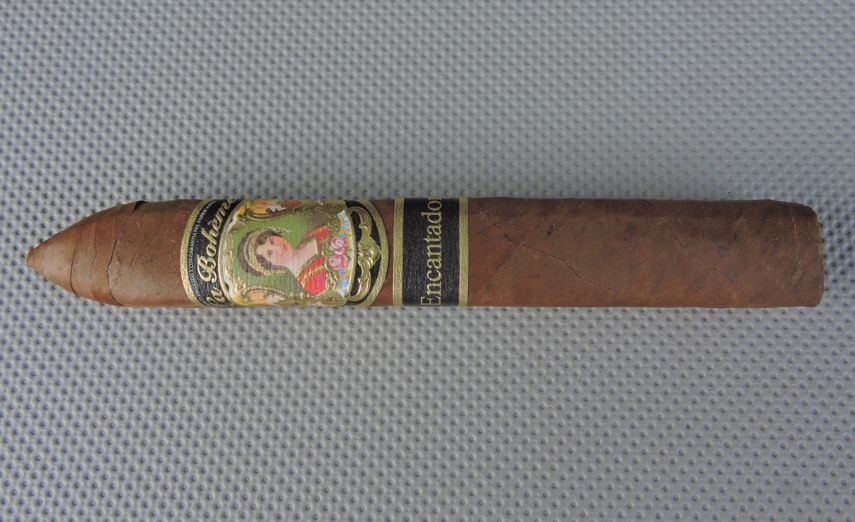 The La Bohème Encantador is the second release under Boutique Blends’ La Bohème brand. La Bohème was a new brand introduced in 2014 that was meant to pay homage to three passions of Boutique Blends’ President Rafael Nodal: Music, Cuba, and Cigars. The Encantador builds upon the original La Bohème blend as it uses similar blend components, but incorporates a higher priming wrapper. The other difference is that the vitolas in the Encantador line are box-pressed. After taking a look at a pre-release of this cigar in the Turin (Corona) size, today we look at a post-production version in the Fenice (Torpedo) size.

The La Bohème Encantador uses an Ecuadorian Habano wrapper over Dominican binder and Dominican filler. The higher priming wrapper of the Encantador definitely has a darker look to it. The Fenice is a box-pressed torpedo that measures 6 x 52.

The tweaks made to the La Bohème Encantador in terms of the wrapper priming and box-press make for a whole new cigar experience. The Fenice vitola starts off with some notes of leather, earth, cocoa, and some red pepper. As the cigar experience progresses the leather / earth profile transitions a richer coffee flavor with nuances of cocoa and caramel. The red pepper was prominent on the retro-hale, but toward the last third, I found the red pepper also became more prominent on the tongue.

This is a cigar that progressively will increase in both strength and body.  The La Bohème Encantador Fenice starts out medium strength / medium-bodied.  Toward the second half, both the strength and body progressed to medium to full.  At the very end, I found the body had inched into full territory.

As I mentioned, this is a different cigar than the original La Bohème.  The Encantador isn’t going to have the same Cubanesque feel as the original, but it’s still an excellent cigar.  In particular, I found the Fenice vitola’s box-press torpedo worked great with this blend.  This is a cigar I’d recommend to a more experienced cigar enthusiast. As for myself, this is a cigar I’d easily smoke again and it’s box worthy in my book.