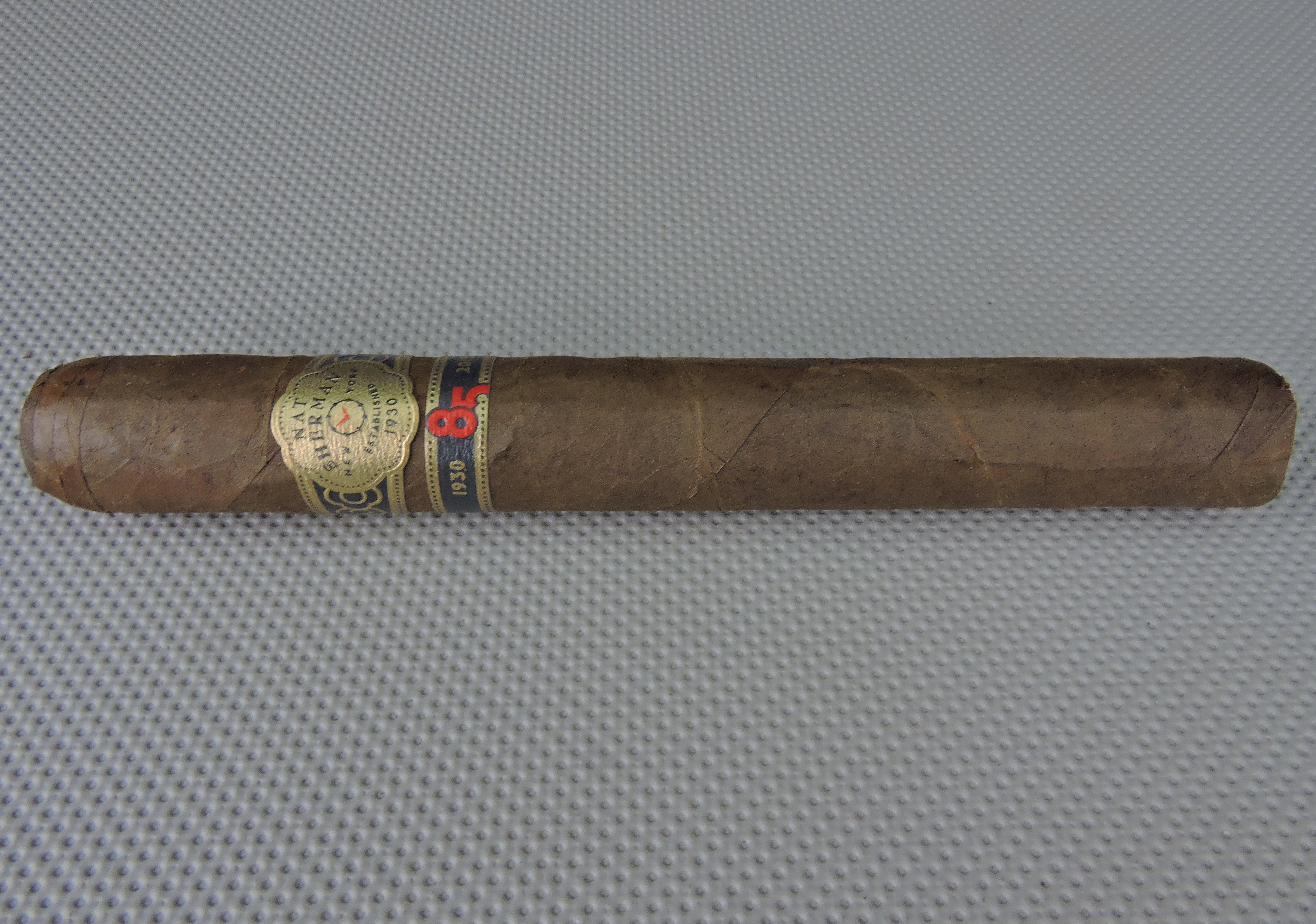 Back in 1930, Nat Sherman opened his first tobacco shop in Manhattan’s garment district carrying his name. It didn’t take long for the company to become an iconic destination in New York for cigar enthusiasts. Now three generations and 85 years later, the company remains a family-run business in New York. The company has also been involved with bringing its own tobacco products to market, and over the past four years, Nat Sherman has enjoyed a significant renaissance in the crowded cigar marketplace.  With 2015 commemorating 85 years in business, the company released a limited edition cigar called the Nat Sherman 85th Anniversary. Recently I’ve had an opportunity to smoke this cigar. Overall, I found the Nat Sherman 85th to be another excellent edition into the Nat Sherman portfolio. 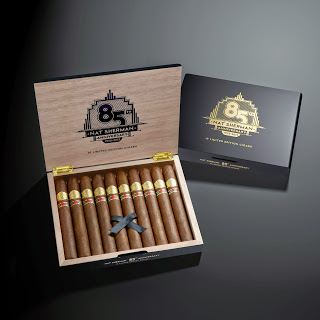 Without further ado, let’s take a closer look at the Nat Sherman 85th Anniversary cigar and see what it brings to the table.

The Nat Sherman 85th Anniversary features a Dominican wrapper over Nicaraguan binder and filler. The cigar is made at Nat Sherman’s long-tme manufacturing partner, the Quesada Cigars factory in the Dominican Republic.

The Dominican wrapper of the Nat Sherman 85th has a dark oak-colored wrapper. Upon closer examination, there is some darker marbling that can be seen. There is a light coating of oil on the surface of the wrapper. There are some thin visible veins as well as some visible wrapper seams.

The start to the Nat Sherman  85th provided notes of earth, cedar, cocoa, and a little bit of black pepper. The cocoa and earth notes moved into the forefront quickly. Meanwhile the cedar and pepper notes receded into the background. These secondary notes were soon joined by a subtle citrus note. The black pepper was also something prominent on the retro-hale.

As the Nat Sherman 85th burned through the first half, the cocoa and earth notes remained primary. The cedar notes floated in and out between the forefront and the background. I still found some subtle citrus notes in the background.  The pepper notes were more distant on the tongue, but more prominent on the retro-hale.

As the Nat Sherman 85th moved into the second half, I found the cedar and earth were now the primary notes. During the later part of the second third, the cocoa notes significantly diminished while the citrus notes pretty much dissipated. There still was a distant pepper note on the tongue, but it remained on the retro-hale.

By the last third, I found the Nat Sherman 85th to have mostly a earthy and cedary profile with still a touch of pepper on the tongue. This is the way the cigar experience came to a close. The resulting nub was fool in temperature and firm to the touch.

Overall I found the Nat Sherman 85th Anniversary to be a well-constructed cigar – and this was reflected nicely on the burn and draw. The burn path of the Nat Sherman 85th remained straight from start to finish. There was a slight amount of jaggedness on the burn line and this was remedied with some touch-ups along the way. I still didn’t find this to be a cigar that required an excessive amount of touch-ups. The resulting ash was on the firmer side. I didn’t find the Nat Sherman 85th Anniversary to be prone to any significant flaking. There was excellent combustion on this cigar as I found this to have an ideal burn rate and ideal burn temperature. 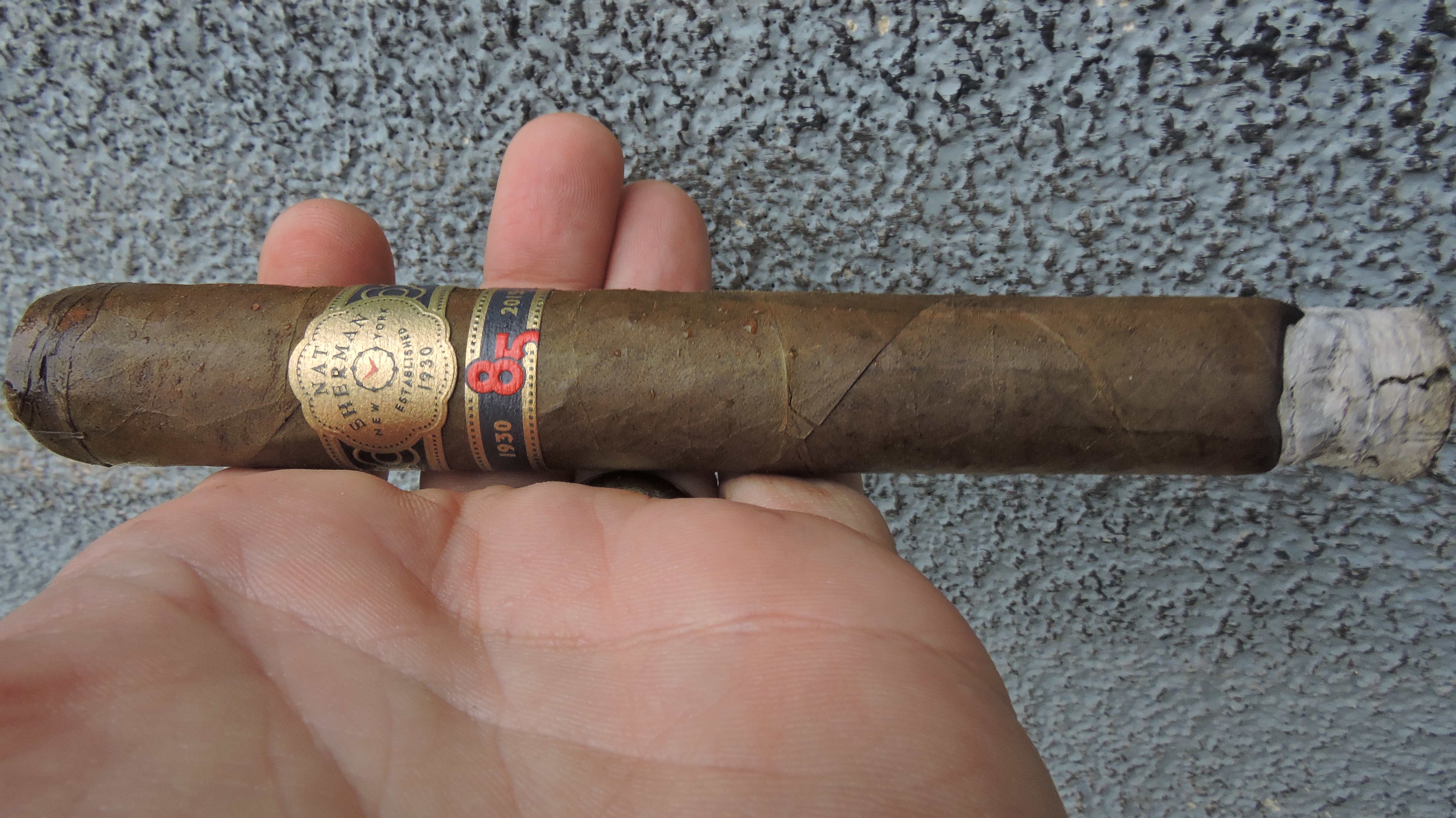 I found the Nat Sherman 85th Anniversary to have a touch of resistance on the draw – which is something I like. This made this cigar an enjoyable one from start to finish.

It’s inevitable that the Nat Sherman 85th Anniversary will be compared against the Joel Sherman 75th Celebration. This is namely because both are limited edition commemorative cigars. My answer to this might be cliche, but these are really two different cigars.

When I look at the experience of the Nat Sherman 85th, it still delivers a nice performance. I will say, I found the first half of the Nat Sherman 85th to be more enjoyable than the second half. This is a cigar I would recommend to both a novice or experienced cigar enthusiast. As for myself, this was a cigar I enjoyed. It’s definitely worthy of a fiver and keeping some of these in your humidor.