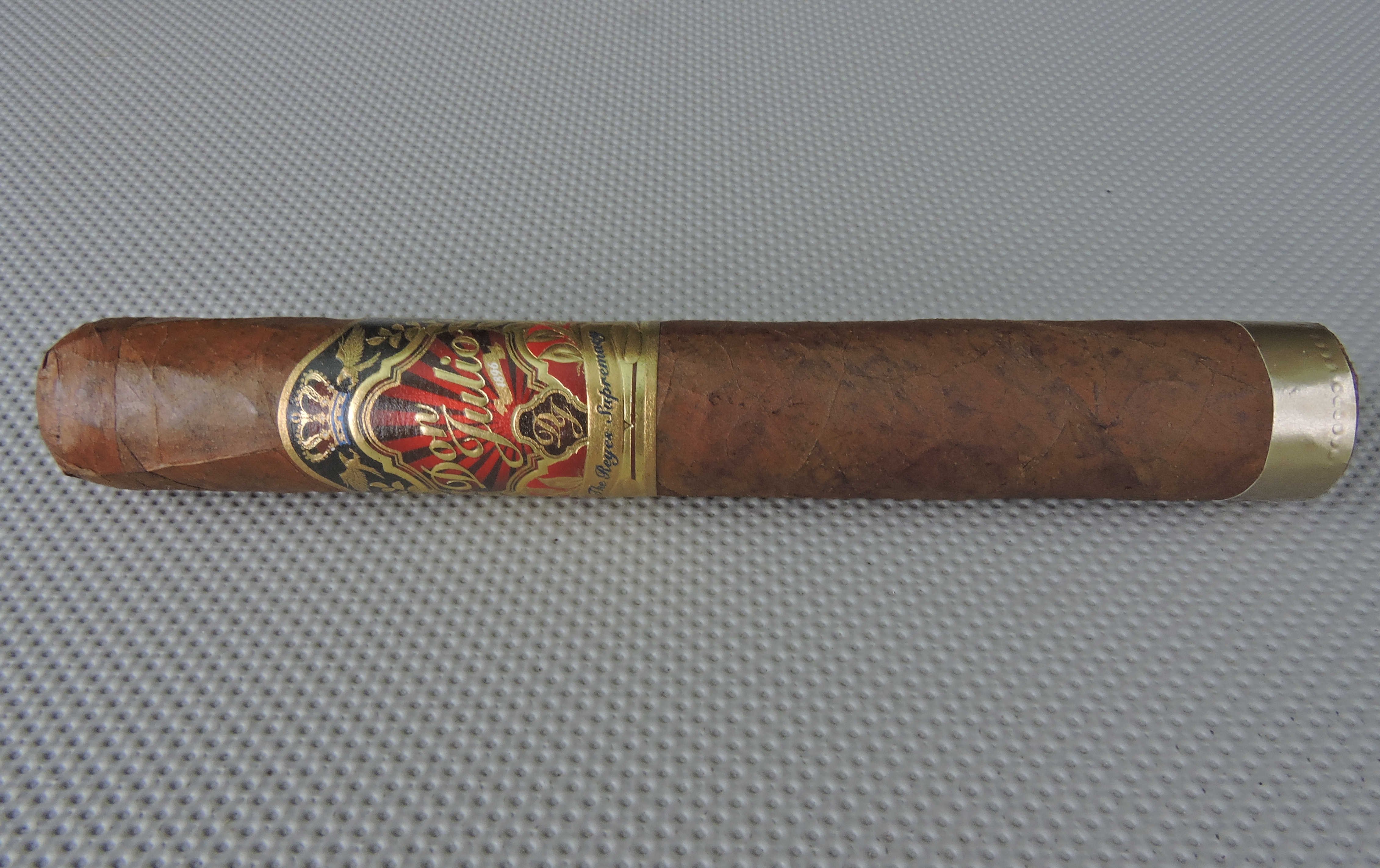 The Don Julio Punto Espada is a line made by De Los Reyes Cigars. De Los Reyes cigars is a company run by the Reyes family. Many know of the Reyes family through Augusto Reyes Sr, a very well-respected sixth generation cigar maker in the Dominican Republic. The Reyes family has been involved in the tobacco growing and leaf brokerage business for over 160 years. Today the company is run by Augusto’s daughter Nirka. De Los Reyes is best known for its Saga brand with the Saga Golden Age and Saga Blend No. 7 lines. The Don Julio Punta Espada is positioned as a more premium and more limited line. Recently I’ve had an opportunity to smoke the Don Julio Punta Espada in the Gordo size. Overall this cigar is a grand slam home run for De Los Reyes. This is a cigar that excels in a larger ring gauge format – and it’s one of the best under the radar cigars I have smoked.

The cigar is named for Don Julio Samuel Reyes Fermin. Reyes is considered to be a legendary tobacco grower from the third generation of the Reyes family. The blend and presentation of the cigar is meant to pay homage to Don Julio. The name Punto Espada is Spanish for “Sword Point”.

Without further ado, let’s take a closer look at the Don Julio Punto Espada Gordo and see what this cigar brings to the table.

The Don Julio Punto Espada is available in five sizes:

The wrapper of the Don Julio Punta Espada Gordo has a medium brown color with a cinnamon tint to it. Upon closer examination, there is some darker marbling on the surface. I found this wrapper to be a thicker wrapper. The wrapper also had a moderate amount of oil on the surface. There are some visible veins while most of the wrapper seams are well hidden.

The band of the Don Julio Punta Espada has a gold, black, and red color scheme. On the center of the band is the text “Don Julio” in a classic gold cursive font sitting on a background of black and gold rays. Just below the “Julio” is a small gold ribbon design with the text “1896” in small white font. Below the “Don Julio” text is a black badge with the initials “DJ” in gold cursive font.  Below the badge is the text “The Reyes Supremacy” in a black cursive font sitting on a larger gold ribbon design. The top of the band features a gold and red crown. The left and right side of the “Don Julio” design features gold adornments that include medallions and leaves.  Further to the left and right are smaller versions of the black badge with the “DJ” initials on it. The left side of the band has the text “REPUBLICA” in gold font while the right side has the text “DOMINICANA” in gold font.

The footer features a band that has a near white gold color to it.

As I normally do, I commenced my smoking experience with a straight cut. After successfully clipping the cap of the Don Julio Punto Espada Gordo, I moved on to the pre-light draw. The dry draw provide notes of sweet natural tobacco. There was also a slight citrus note and a subtle black pepper note. Overall I considered the pre-light draw experience of this cigar to be excellent. At this point I removed the footer band of my Don Julio Punto Espada Gordo and moved on to the smoking phase.

The start to the Don Julio Punto Espada Gordo delivered notes of cedar and natural tobacco. In the background I detected notes of citrus, black pepper, and a subtle grass note. The black pepper was present on the retro-hale, but it was a spice note that was not overly sharp.

By the start of the final third, the black pepper notes increased on the tongue. These notes moved into the forefront and toward the later stages the pepper seemed to be the prominent note. Toward the end, I still detected subtle notes of natural tobacco, cedar, and citrus. This is the way the cigar experience came to a close. The resulting nub was firm to the touch and cool in temperature.

The burn to the Don Julio Punto Espada Gordo started out a little jagged, but as it moved past the first inch, I found the burn line straightened up nicely. This cigar had a straight burn path and was never in danger of tunneling or canoeing. The resulting ash had a salt and pepper color. I found the ash wasn’t overly firm, but it didn’t prove to be a loose flaky ash either. The combustion to the Don Julio proved to be excellent as this cigar delivered an ideal burn rate and ideal burn temperature. 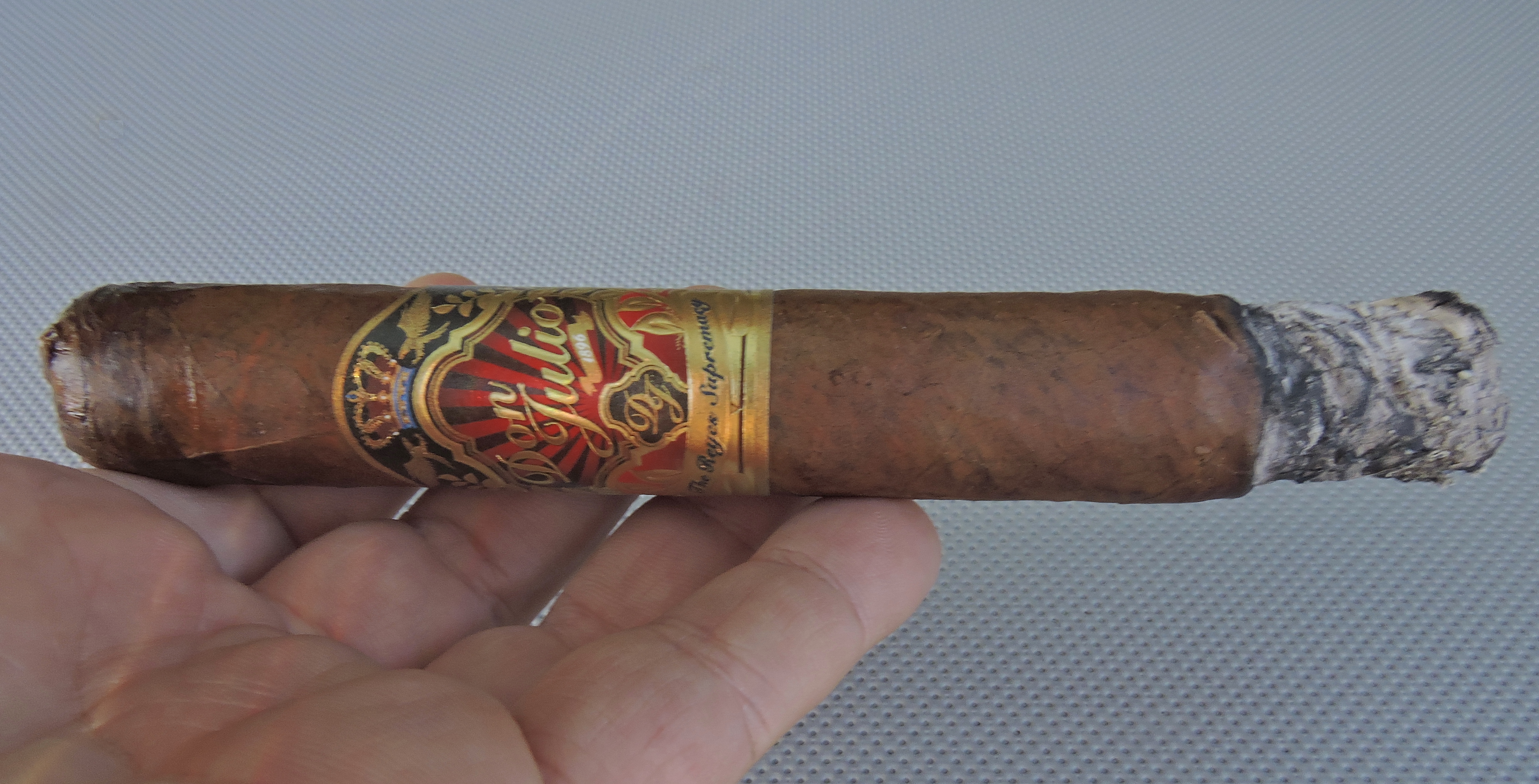 I found the draw to the Don Julio to be open, but not loose. This was a low maintenance cigar to derive flavors from.

From a strength perspective, I found the Don Julio Punto Espada Gordo fell right in the middle of the spectrum. I assessed this cigar as being medium in strength from start to finish. As for the flavors, they started out medium-bodied. There was a gradual increase in the depth of the flavors and by the second half the cigar progressed to medium to full-bodied. The increase in body leveled off in the second half. In terms of strength versus body, I gave a slight edge to the body.

Simply put, the Don Julio Punto Espada Gordo fired on all cylinders. It delivered outstanding flavor and a nice level of complexity. This was a cigar seemed tailor-fit to the 58 ring gauge. One thing I have enjoyed about the cigars coming out of De Los Reyes is that they can appeal to both the traditional and the modern smoker. The Don Julio Punto Espada definitely fits the bill here. This is a cigar I would recommend to an experienced cigar enthusiast, but its one I would not discourage a novice from smoking either. As for myself, this is definitely a cigar I look forward to smoking again and having in my humidor. It’s the type of cigar I would fight Chuck Norris for.

* De Los Reyes Cigars is a sponsor of Cigar Coop and Stogie Geeks.