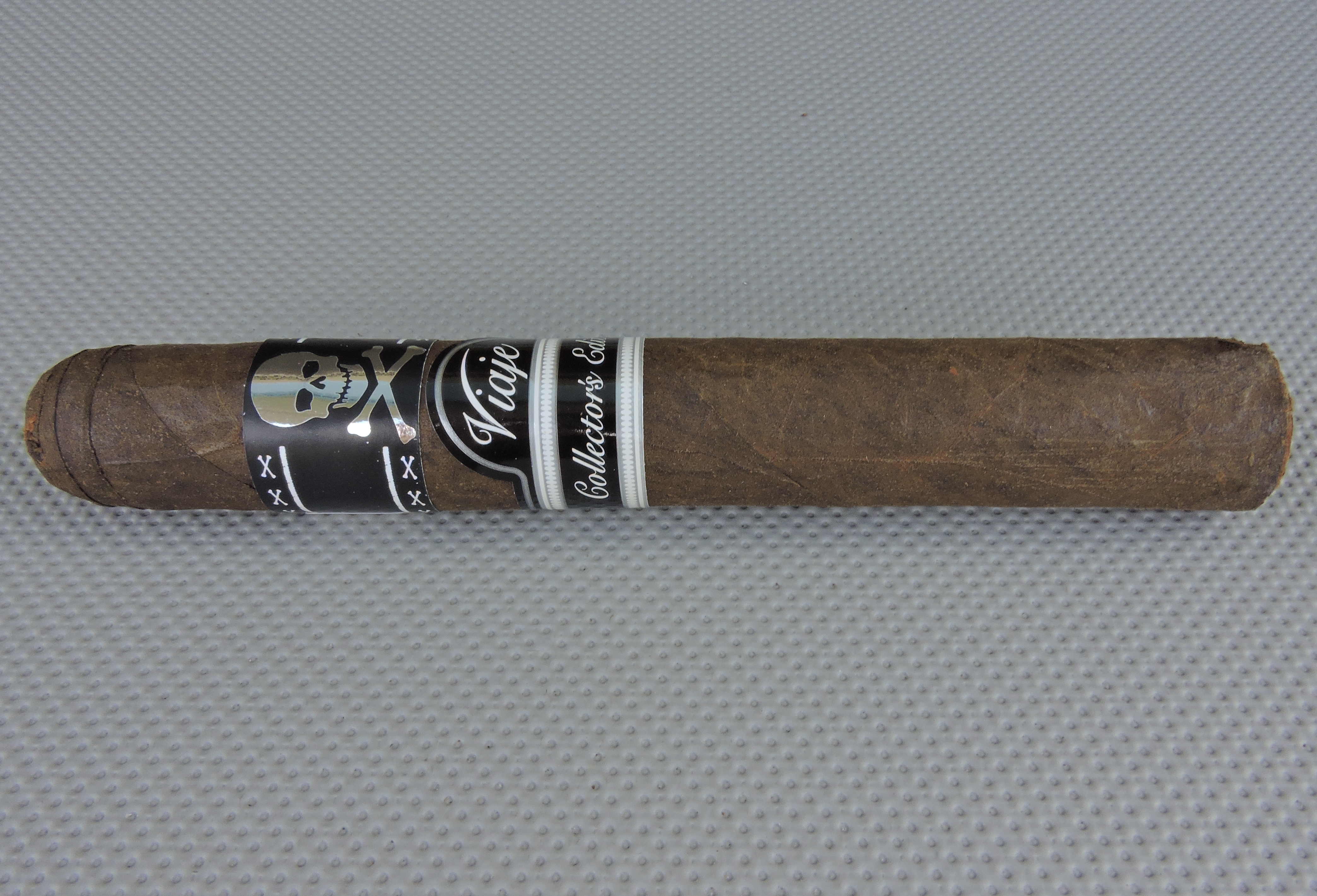 Skull and Bones follows Viaje’s small batch model for the majority of its releases. Ten Ton Tess Collector’s Edition makes up the thirteenth batch to be released since the line’s inception in 2010. As with several Skull and Bones releases, it has a bomb theme.  In this case, Ten Ton Tess is the nickname for an Earthquake / Seismic bomb used by Britian’s Royal Air Force during World War II. The Ten Ton Tess was considered the most powerful non-atomic bomb from World War II.

As we mentioned, there are two blends in the Ten Ton Tess Collector’s Edition series. Both cigars are 6 x 54 Toros. The Ten Ton Tess Collector’s Edition “Silver” features a Mexican San Andres wrapper.  The cigars are packaged in 19 count humidified jars. There are two jar options – a black one and a white one. The cigars are identical in both jar releases. 500 jars in each jar option were released. The bands feature a silver colored skull on the band. 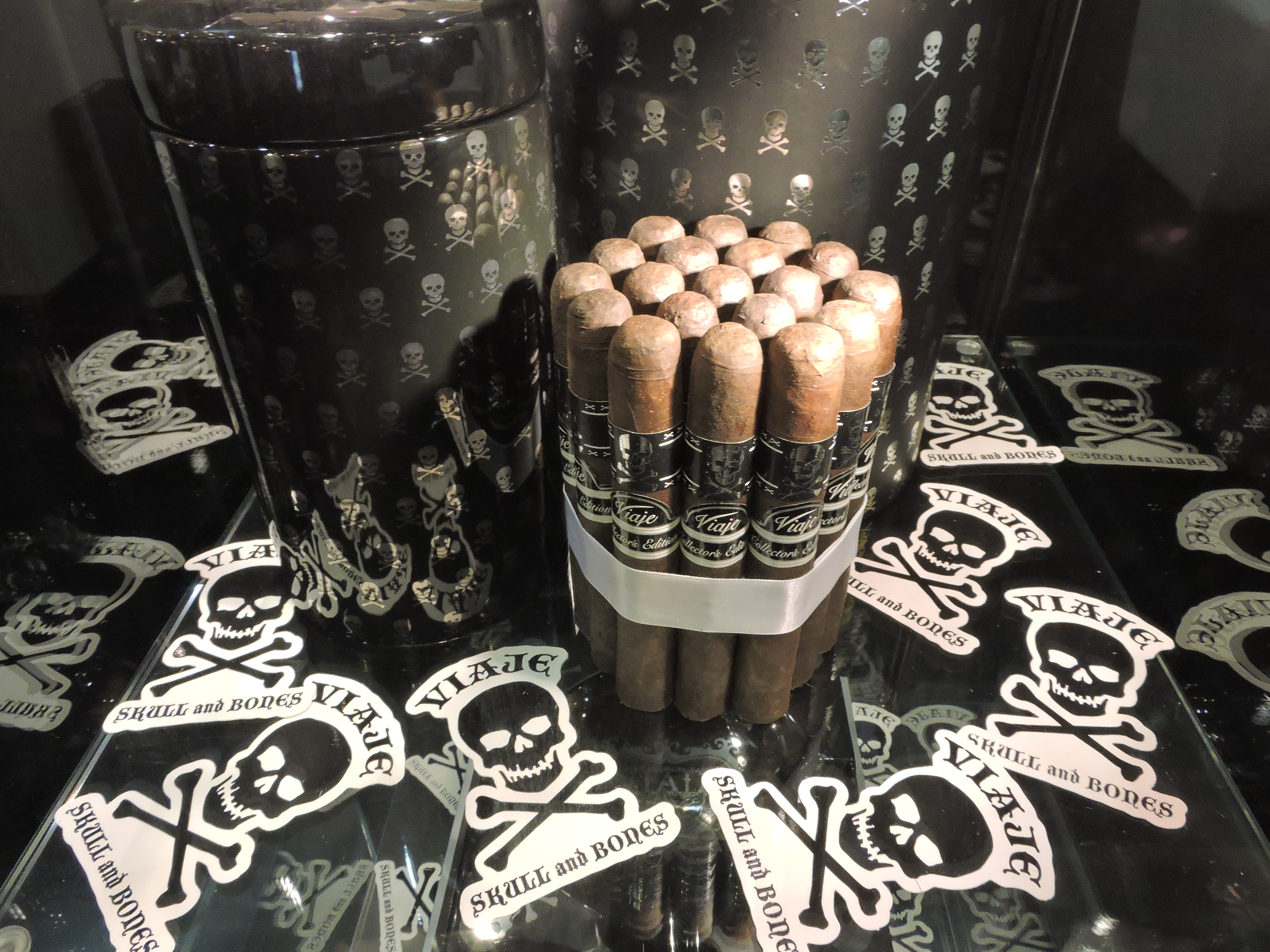 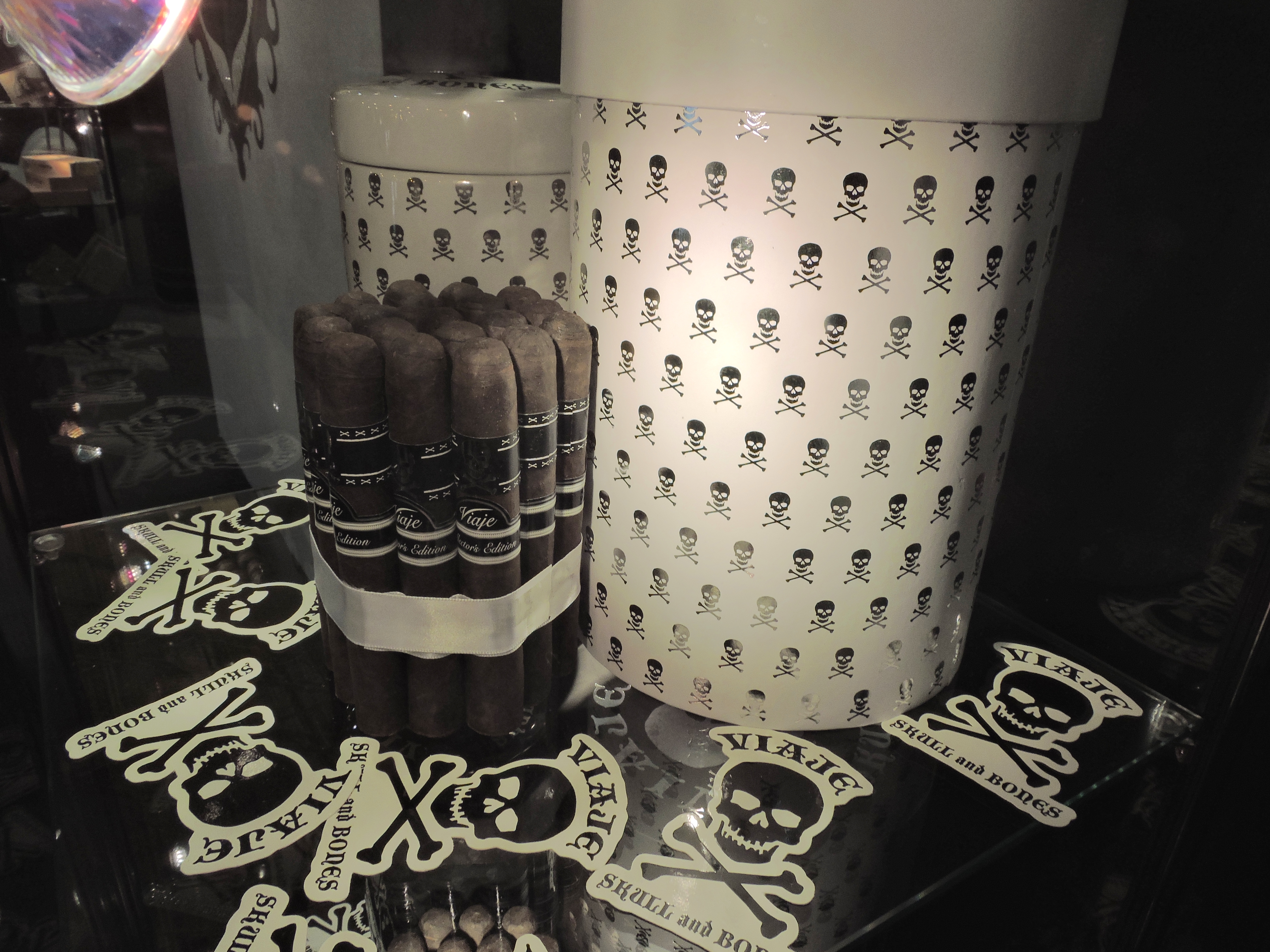 As part of the Ten Ton Tess batch released, a second blend known as the “Secret Blend” or Viaje Skull and Bones Ten Ton Tess (Gold) release. While this cigar is also a 6 x 54 Toro, Viaje isn’t disclosing details on this blend. This was much more limied as only 100 jars of 19 were produced. Only one jar option – a black and gold one was made available. The bands also feature a gold-colored skull on the band. 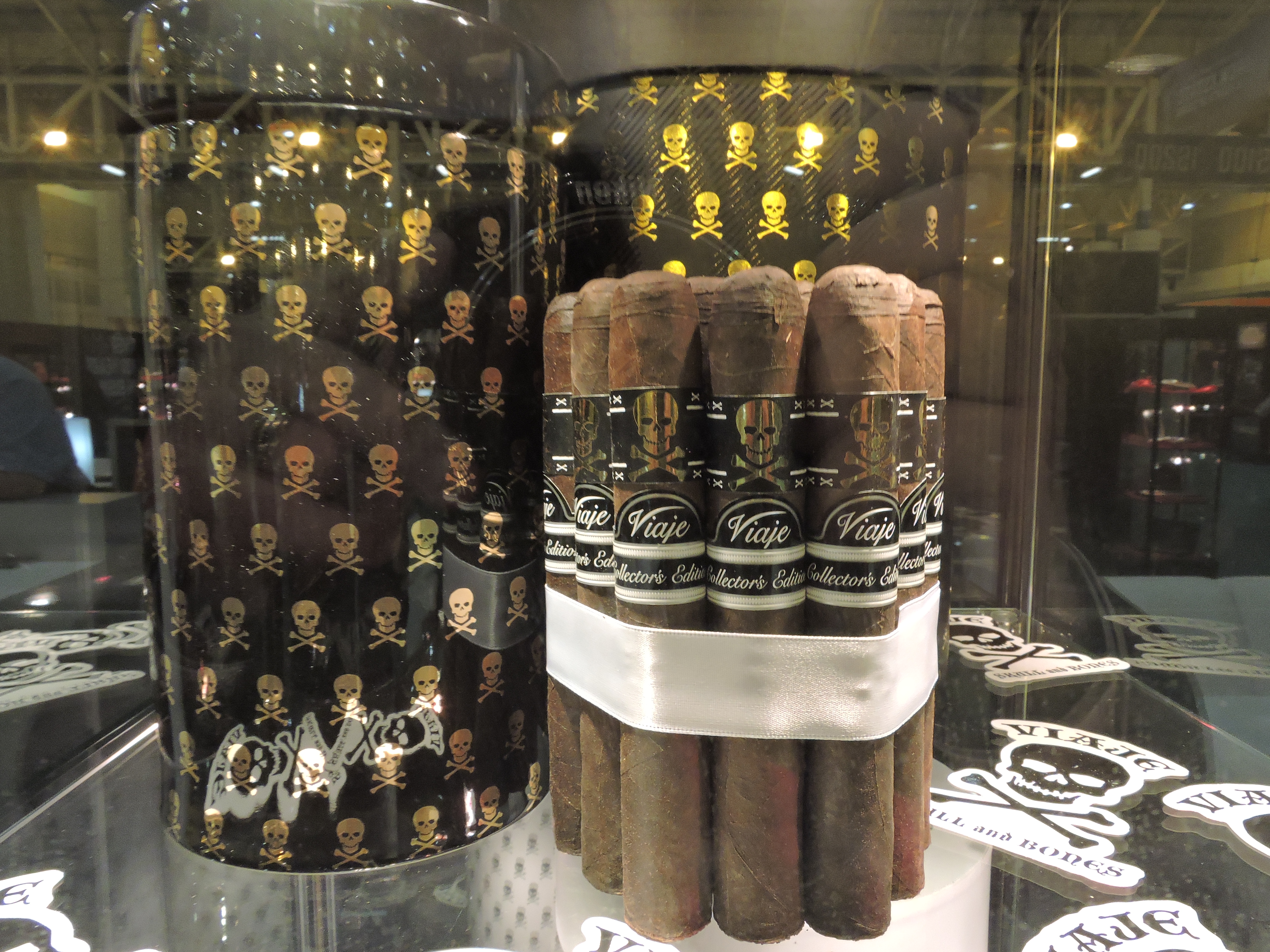 As mentioned, the Viaje Skull and Bones Ten Ton Tess blends were produced at the PDR Cigars factory in the Dominican Republic. It was in 2015 when Viaje added the PDR Cigars factory as a manufacturing partners. This blend incorporates tobaccos from four countries – Mexico, the Dominican Republic, Brazil, and the United States – tobaccos that typically have not been seen in Viaje blends prior starting to work with PDR.

As mentioned, the Viaje Skull and Bones Ten Ton Tess is available in one size – 6 x 54 Toro.

The Mexican San Andres wrapper of the Ten Ton Tess Collector’s Edition has a dark espresso color to it. The surface of the wrapper has a coating of oil on it. The dark color of the wrapper does a good job at hiding the wrapper seams. Any veins that are visible on the surface are quite thin.

There is a secondary band toward the footer that has a black, silver, and white color scheme. The band has a black semicircle section on the upper portion trimmed with silver. On that semicircle is the text “Viaje” in white cursive font. On the lower half of the band (a traditional band stripe) is the text “Collector’s Edition” in a smaller white font. White and silver striping divide the two portions of the band. This striping is also on the lower edge of the band.

As I normally I do, I placed a straight cut into the cap of the Viaje Skull and Bones Ten Ton Tess Collector’s Edition. Once the cap was successfully clipped, I moved on to the pre-light draw. The cold draw provided a mix of black coffee, maduro sweetness, and a slight spice. Overall I considered the pre-light draw of the Skull and Bones Ten Ton Tess to be satisfactory. At this point I was ready to light up this cigar and see what the smoking experience would have in store.

The start to the Skull and Bones Ten Ton Tess Collector’s Edition delivered notes of mocha, lemon rind and a mix of black and white papper. The lemon rind note delivered some sweetness and a touch of both bitterness and sourness which actually balanced the sweetness nicely. Meanwhile the retro-hale delivered an additional layer of black pepper spice.

As the Ten Ton Tess moved through the first third, the mocha notes became more of a classic black coffee note. The lemon rind notes emerged as the primary note with the coffee and pepper close secondary notes.

During the second third, the coffee notes increased. The coffee notes joined the lemon rind in the forefront and would eventually displace the lemon as the primary note. Meanwhile the pepper remained a close secondary.

By the last third of the Skull and Bones Ten Ton Test, an earthy component emerged with the coffee notes. The pepper notes still remained quite close to the forefront and the lemon rind was now further in the background. This is the way the cigar experience came to a close. The resulting nub was firm to the touch and cool in temperature.

Overall I found the Viaje Skull and Bones Ten Ton Tess Collector’s Edition to score well on the burn. The cigar maintained a straight burn path from start to finish. There was a slight curvature to the burn line, but this didn’t require an excessive amount of touch-ups. The ash had a light gray, almost white color to it. I did find the ash was on the looser side and was prone to flaking. The burn rate and the burn temperature were both ideal. 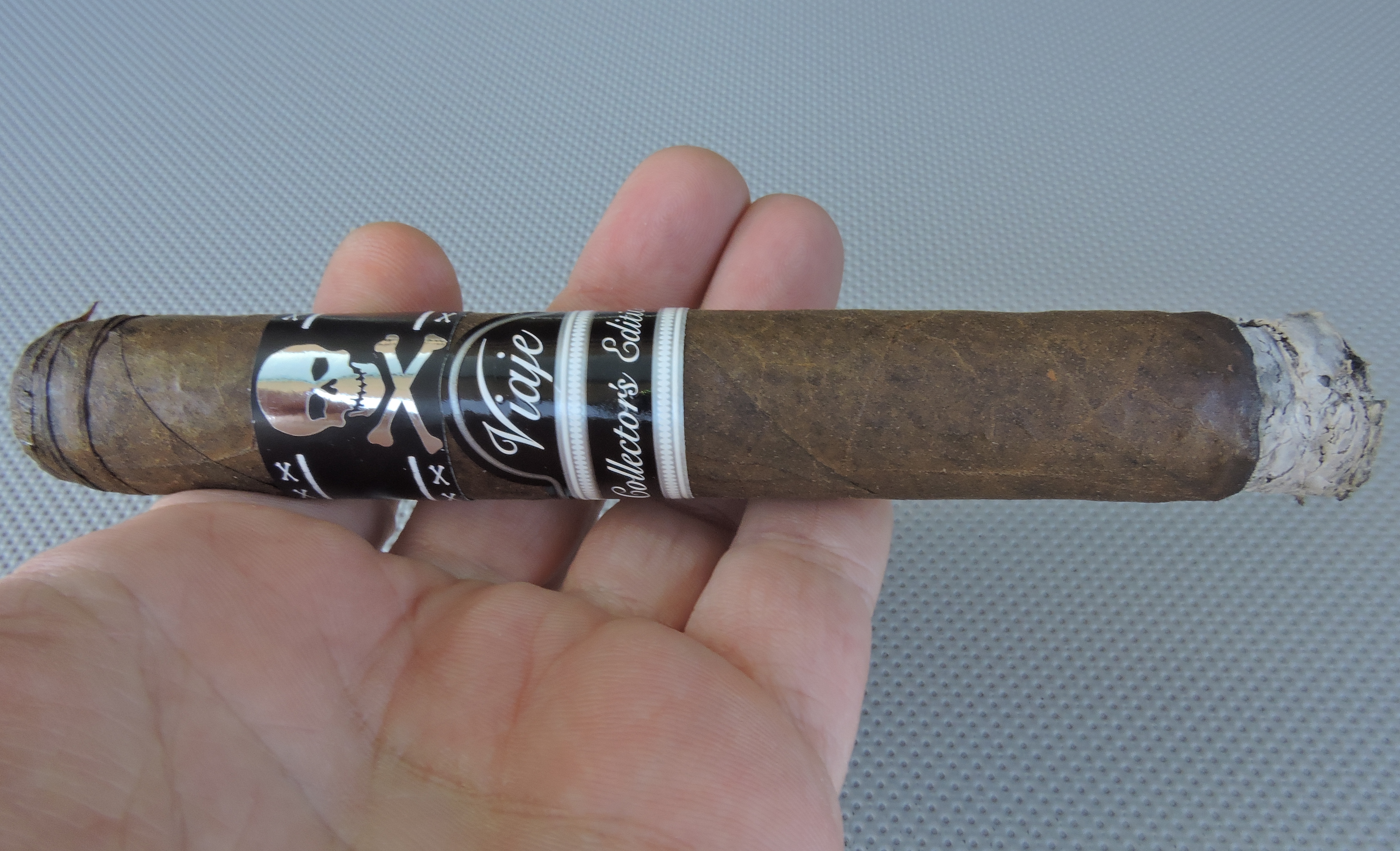 As for the draw, I found it had a touch of resistance – which is something I like. This made the Ten Ton Tess Collector’s Edition an enjoyable cigar to puff on.

Viaje’s Skull and Bones releases are known for being strong, full-bodied cigars. With a name like Ten Ton Tess, I didn’t know what to expect. Surprisingly, the Skull and Bones Ten Ton Tess Collector’s Edition was not a full-throttle power-bomb. This is a cigar that pretty much maintained medium to full strength. As for body, the cigar actually started out medium-bodied before progressing to medium to full in the second third. This cigar was released late last summer and since I only recently smoked these, so its tough to tell if aging has mellowed this a bit.

In terms of strength versus body, I still found the strength had a slight edge, but this really didn’t knock the equilibrium off to much.

While Viaje’s Skull and Bones line is not a regular production offering, I do think it was a Viaje line that needed a bit of a change. The move to to the PDR factory, new size, and use of some different tobaccos are just what the doctor ordered. The end result was a cigar very different than the previous iterations of Skull and Bones. I also liked the fact that this cigar was a little mellower than some of the other Skull and Bones releases.  This is still a strong enough cigar where I would recommend it to a more seasoned cigar enthusiast. As for myself, this was a very enjoyable cigar. It’s a cigar I certainly would reach for again – and it’s worthy of a box (jar) split.