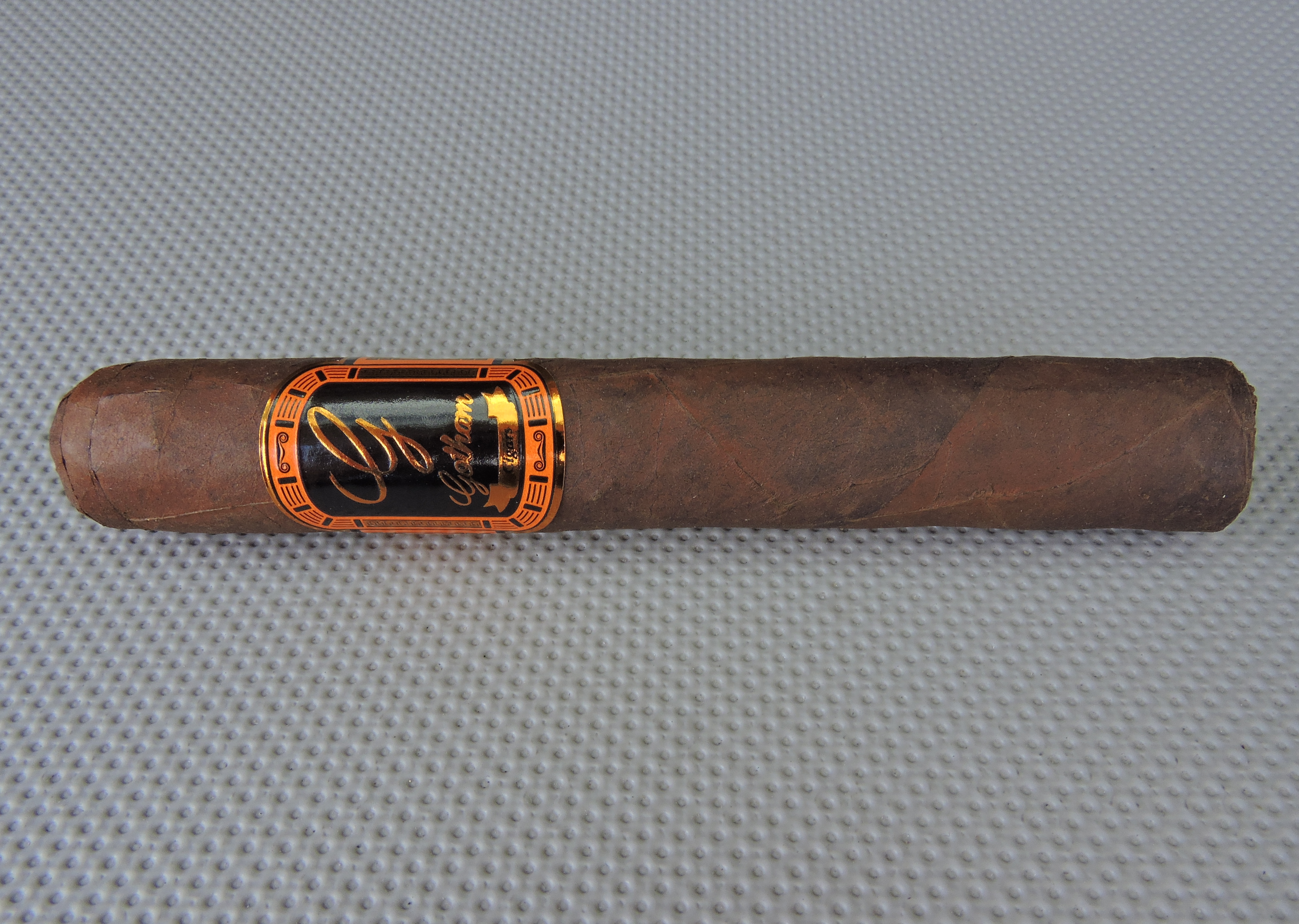 The Gotham Heroes Alec Bradley currently is offered in one size – a 5 x 50 Robusto. It is sold in five packs. While the SRP is $30.00 for a five pack, at press time the five packs are available for $19.99. This prices the cigars at $4.00 per cigar – which is quite affordable.

Without further ado, let’s take a closer look at the Gotham Heroes Alec Bradley Robusto and see what this cigar brings to the table.

The Gotham Heroes Alec Bradley is currently available in one size – a 5 x 50 Robusto.

The Nicaraguan Sun Grown wrapper of the Gotham Heroes Alec Bradley Robusto is definitely on the dark side. The wrapper itself has a chocolate brown color to it. While there is a light coating of oil on the wrapper, I found the wrapper to have a silky complexion. The dark color of the wrapper does a good job at hiding the wrapper seams. There are also some visible veins present on the wrapper.

The band to the Gotham Heroes Alec Bradley has a black, orange, and gold color scheme. The surrounding orange on the band almost gives the gold font a slight copper tint to it. The front of the band has a black square surrounding by an orange and black frame. The frame is surrounded by gold trim. On the black square is a gold cursive “g”. Below that is the text “gotham” in a smaller gold cursive font. There is a gold ribbon below the cursive text with the text “Cigars” in dark font. The remainder of the band is orange surrounded by black and gold trim on the edges. There are also gold and black adornments on the sides of the band. The left side of the band has the text “Hand Made” and the right side of the band has the text “Tradition” – both in a dark “handwritten” style font.

As I normally do, I went with a straight cut to remove the cap. Once the cap of the Gotham Heroes Alec Bradley Robusto was removed, it was on to the pre-light draw. The dry draw produced a combination of chocolate and earth along with a light cedar note. Overall I was quite pleased with the pre-light draw. At this point I was ready to light up the Gotham Heroes Alec Bradley and see what the smoking phase would have in store.

During the first third, the earth notes were primary, but the black cherry and chocolate were also prominent – moving in and out of the forefront at different times. Meanwhile the black and white pepper combination was further in the background.

By the second third, I saw the earth notes take more control with the black cherry and chocolate in more of a secondary role. The pepper became a little more prominent on the after-draw, but as the cigar burned through this third, it increased on the full draw. Toward the latter part of the second third, the pepper inched closer to the forefront.

As the Gotham Heroes Alec Bradley Robusto moved into the last third, the pepper notes continued to be more prominent and toward the latter stages of the cigar, the spice was well in command. The last stages of this cigar were on the spicy side. This is the way the cigar experience came to a close. The resulting nub was cool in temperature, but slightly soft to the touch.

Overall I found the Gotham Heroes Alec Bradley Robusto to be a well-constructed cigar and this reflected nicely on the score of the burn and draw. The burn path and burn line were both relatively straight. I didn’t find this to be a cigar that required an excessive amount of touch-ups. The resulting ash was on the firm side and had a salt and pepper color to it. The combustion also scored quite well as the cigar had an ideal burn rate and ideal burn temperature. 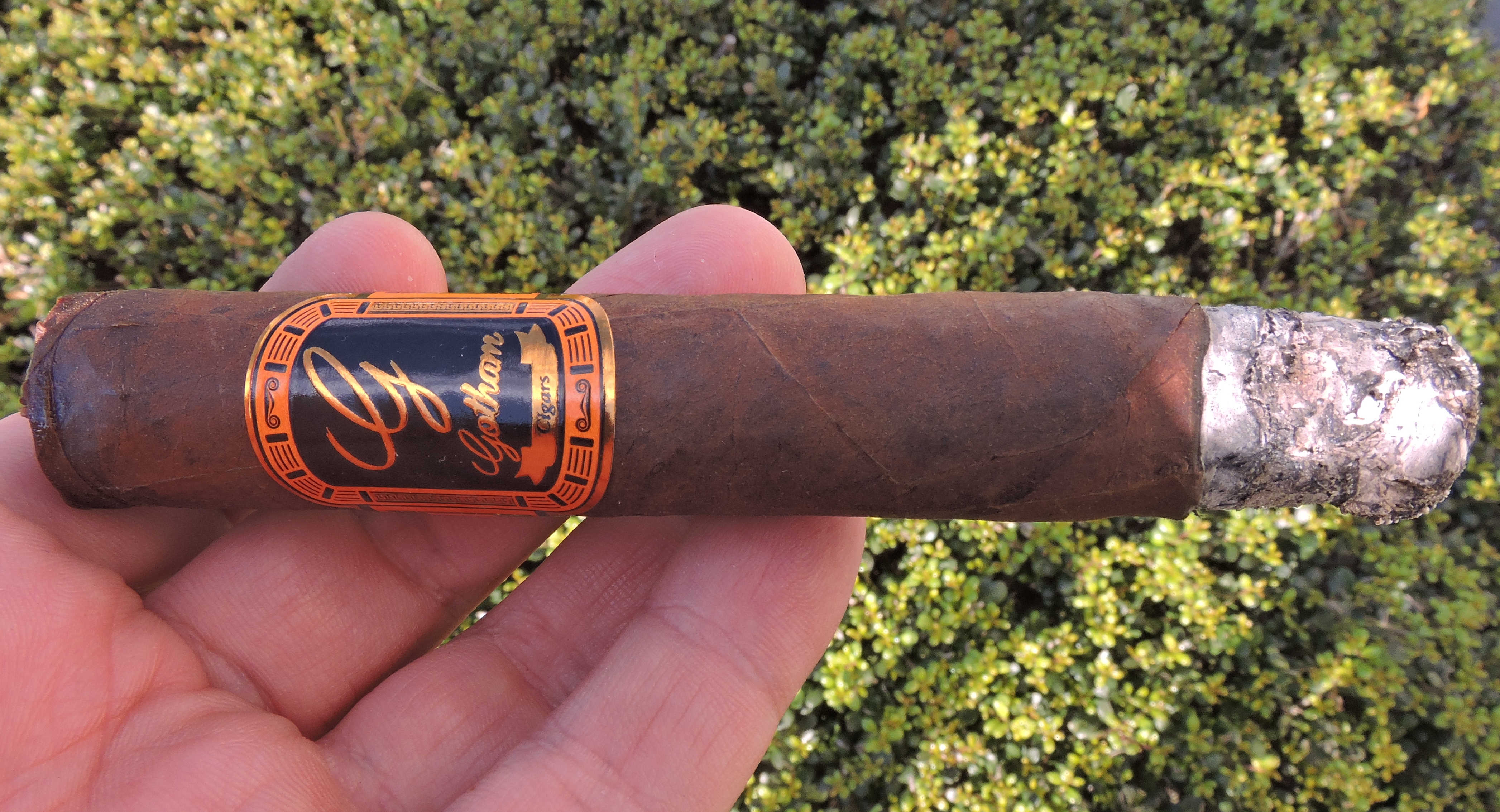 The draw performed quite well. It had a touch of resistance – which is something I like. This was an enjoyable cigar to puff on.

From a strength perspective, I found the Gotham Heroes Alec Bradley Robusto to start out medium. There was a gradual increase in strength along the way, and by the last third the strength increased just enough to put this cigar in the medium to full range. Meanwhile, the body also started out medium, but increased a little more rapidly. By the second half, the cigar was delivering medium to full-bodied flavors. In terms of strength versus body, I gave a slight edge to the body.

On the plus side, if the Gotham Heroes Alec Bradley Robusto was smoked unbanded, I would never have pegged it for a cigar that is priced in a $4.00 to $6.00 range. On the other hand, while I loved the flavors early on, the spice took control in the second half – and this was at the expense of those other flavors. Since price isn’t factored into the Cigar Coop numeric score, it didn’t result in a higher score. At the same time, this cigar still did have enough to offer, and it clearly is a cigar that delivers value. Overall it’s a cigar I could recommend to an experienced cigar enthusiast who enjoys a cigar that delivers spice. As for myself, I can still see myself smoking this cigar again. It’s certainly worthy of the five packs it is packaged in.