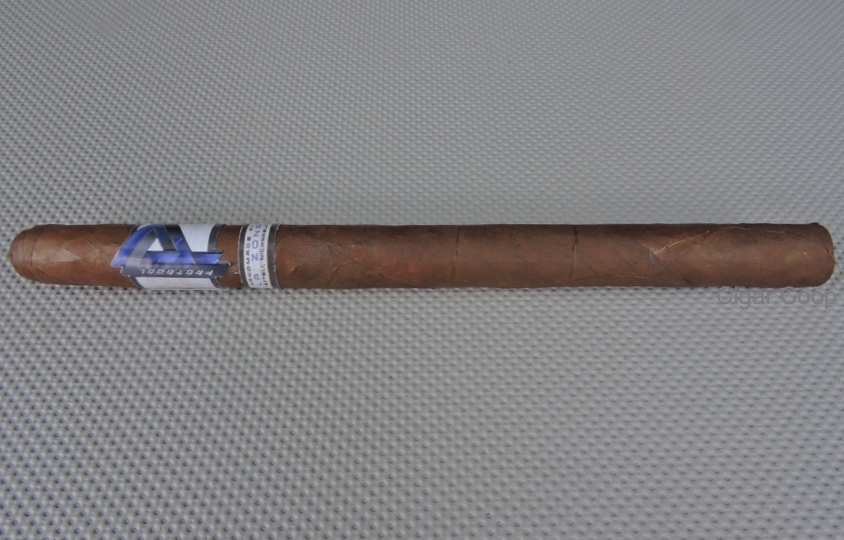 The Protocol Lancero is a new line extension to Cubariqueno Cigar Company’s Protocol line. It was about a year ago, when cigar enthusiasts Juan Cancel and Bill Ives launched Cubariqueno Cigar Company. The company’s first release, Protocol was released in two sizes to select retailers in New Jersey. Last summer, the duo headed to the 2015 IPCPR Trade Show where they took their release national. The cigar proved to be one of the small batch revelations of the 2015 trade show. Now with a year under their belts, Cancel and Ives have added a third size, a  7 1/2 x 38 lancero. The new lancero, along with a whole new line, the Protocol Probable Cause are soft-launching at Berkeley Humidor in New Jersey on May 21st. Recently I’ve had an opportunity to smoke the new Protocol Lancero. I had been very impressed with the first two sizes of Protocol. With the Protocol Lancero, the duo takes things to a whole new level.

Without further ado, let’s break down Cubariqueno’s Protocol Lancero and see what this cigar brings to the table.

The blend to the Protocol Lancero has an Ecuadorian Habano Oscuro wrapper over Nicaraguan binder and filler. The blend was slightly adjusted for the lancero format.

For the Protocol Lancero, it will offered in ten count packages. The Corona Gorda and Toro have both ten count and twenty count offerings.

The Ecuadorian Habano wrapper has what I would term a medium / medium to dark color with a rosado tint to it. There is a light coating of oil on it. Overall it is a smoother lancero. There  are some thin visible veins and thin visible wrapper seams on the surface.

Before lighting up the Protocol Lancero, I went with my usual choice of a straight cut to remove the cap. Once the cap was successfully removed, I proceeded with the pre-light draw. The dry draw delivered a mix of chocolate, cedar, and a slight floral note. Overall I considered the pre-light draw of this cigar to be excellent. At this point, I was ready to light up the Protocol Lancero and see what the smoking phase would have in store.

The Protocol Lncero started with a burst of black pepper. The black pepper subsided into the background and gave way to notes of cedar tobacco. Meanwhile I also detected black pepper on the retro-hale.

As the flavor profile took shape, some natural tobacco notes joined the chocolate in the forefront. The chocolate notes also had a slight lingering effect on the tongue. Meanwhile the cedar notes remained a close secondary note. Further back there was a slight grapefruit note and some very subtle black pepper notes son the tongue.

By the second third, the cedar notes joined the natural tobacco in the forefront. The chocolate notes receded but were still a close secondary note. There was a little less lingering of the chocolate on the afterrdaw. I also still picked up some subtle grapefruit and pepper notes in the background.

By the last third of the Protocol Lancero, the cedar and natural tobacco remained primary. The pepper notes increased, but didn’t quite overtake the natural tobacco and cedar. There still was a touch of the chocolate and grapefruit notes present toward the end. As the Protocol Lancero came to the end, there was still plenty of flavor. The resulting nub was excellent – firm to the touch and cool in temperature.

The Protocol Lancero is a well-constructed cigar and this was reflected on the burn an draw. The burn line and burn path remained straight from start to finish requiring very few touch-ups along the way. The cigar was tight and firm with a mostly light-gray ash color to it. Meanwhile the burn rate and burn temperature was ideal. Overall the burn scored our highest “Exceptional” rating.

Burn of the Protocol Lancero

As for the draw, it was on the open side, but it seemed to work quite well with this vitola. This was a low maintenance cigar to derive flavors from.

In terms of strength versus body, I found the body of the Protocol Lancero maintained a slight edge from start to finish.

When a lancero vitola is released, I find it creates a lot of excitement among fans of this vitola. From my point of view, it depends on the blend to determine how well a lancero will work. This is true for any new vitola being considered for a line. With the Protocol, this is a blend that works extremely well with the lancero. Whatever adjustments were made to the blend provided the midas touch on an already excellent blend. From my point of view, this is still a cigar I’d recommend to a more seasoned cigar enthusiast. As for myself, this is a cigar I would reach for and smoke again – and it’s easily worthy of a box purchase.