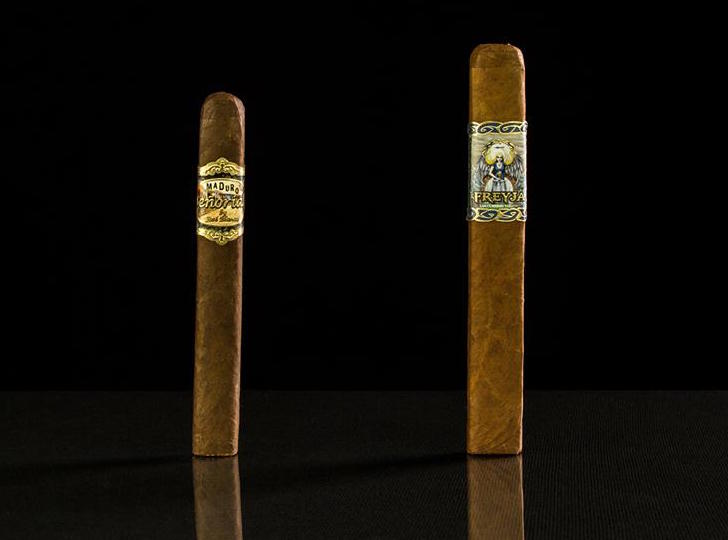 It turns out that both the team was thinking along the same lines when it came for plans for a 2016 release. “Jose and I actually thought of making each a box-press separately. I forgot who, many months ago, we said to the other ‘I’m thinking of making a Box-press’ and the other one said ‘Me too! Didn’t I tell you?'”, commented Viktorsson.

Last year, the Senorial Maduro and Freyja lines made their debut for Las Cumbres Tabaco. In particular Freyja was a project spearheaded by Viktorsson while Blanco has focused on Senorial.

The Senorial Maduro will add the El Cuadro, a 5 3/4 x 46 box-pressed vitola. El Cuadro which means “The Frame”.  According to Viktorsson, the name has a double meaning. Not only does it represent a box-press shape, but since Viktorsson uses oil paintings for the company’s logos, it has ties to the art realm. Blanco’s decision to add the box-press resulting from consumer feedback from his store visits and seminars he has conducted over the past year. Since most of the Senorial Maduro is slanted toward larger ring gauges, he felt a more delicate size was needed and the 5 3/4 x 46 size fit the bill.

El Cuadro will feature a Mexican San Andres wrapper and use Dominican tobaccos for the binder and filler. The new box-press size becomes the fifth vitola in the line.

Freyja will add Mjölnir (pronounced [Me-YUL-nir] or [Me-YOEL-nir] or “neer” in the end), a 6 1/2 x 55 box-pressed vitola. While Blanco’s Senorial Maduro needed a thinner ring gauge, Viktorsson felt Freyja needs a larger ring gauge. Rather than to simply add a larger round size, she decided to do something different and the 6 1/2 x 55 box-press clicked. The name Mjölnir represents the name of the hammer of the Norwegian god Thor. The name is an interesting twist for the line because the line’s Toro size is called “Thor’s Hammer”.

Mjölnir also becomes the fifth vitola to the Freyja line. The blend features a Dominican Criollo wrapper over a Mexican San Anderes binder and a filler of Dominican and Nicaraguan tobaccos.

The Senorial Maduro El Cuadro and Freyja Mjölnir will come in 21 count boxes and be priced at $7.50 and $9.00 respectively.

“Jose and I both agree that this press on these tobaccos could also add some extra intensity in flavor and character. When we tried them we feel that we were right in this case for both lines – this vitola suits them both very well as they are already full flavored blends, now with that little extra from the box-press,” added Viktorsson.

The cigars are expected to ship to retailers immediately following the 2016 IPCPR Trade Show.

At a glance, here is a look at the Senorial Maduro and Freyja lines: