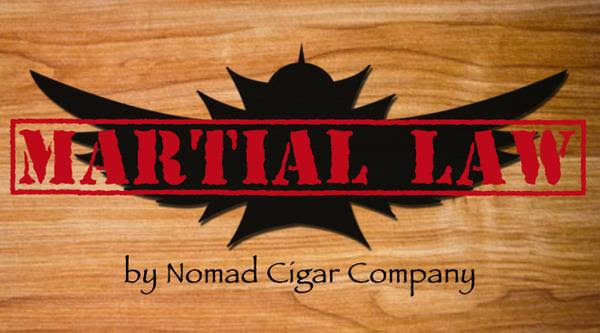 At the 2016 IPCPR Trade Show, Nomad Cigar Company will unveil its latest release, Martial Law. For this project owner Fred Rewey collaborated with a factory he hasn’t worked with in the past, Fabrica Oveja Negra.

Martial Law marks the 11th blend produced by Nomad Cigar Company, and the 8th Nicaraguan been overall. The cigar incorporates tobaccos from the four major growing regions of Nicaragua: Jalapa, Condega, Esteli, and Ometepe. The cigar will also feature a Habano wrapper. Martial Law will be offered as a 6 x 50 Toro and will be packaged in 12 count boxes with a divider. Pricing is slated to be $12.00 per cigar.

“The Esteli Lot 8613 has been one of my most popular blends. I love the rustic nature of it but also wanted something with a bit more punch or complexity. Basically the Martial Law blend started as my wanting a double ligero version of the Lot 8613 and kind of grew from there,” commented Fred Rewey in a press release.

Rewey added, “I was very impressed with Fabrica Oveja Negra during a visit last year. Frankly, I have not seen anyone get a new factory up to speed as fast as they did. With attention to detail and excellent tobacco, a project there was inevitable at some point.”

This also marks the first project Fabrica Oveja Negra has produced for one of the Boutiques Unified (formerly known as Boutiques United and prior that was House of Emilio) line.

At a glance, here is a look at Nomad Martial Law: