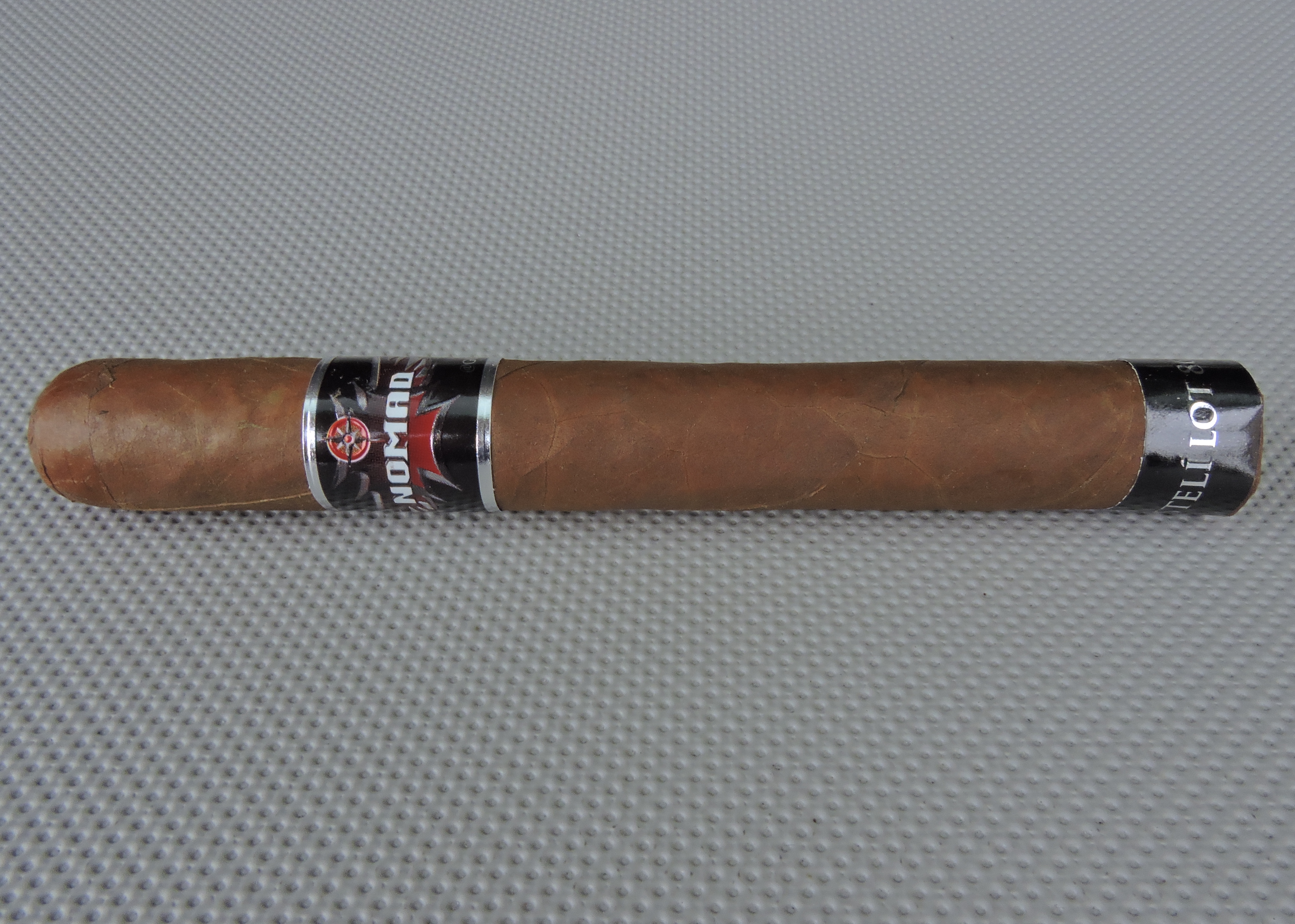 The Nomad Esteli Lot 8613 is the fifth regular production line to be released by Nomad Cigar Company. Since launching his company back in 2012, company founder Fred Rewey has split the production of his lines between the Dominican Republic and Nicaragua. As the name indicates, this is a cigar out of (Esteli) Nicaragua. The Nomad Esteli Lot 8613 became Nomad’s third regular production line to be released out of Nicaragua and fourth overall (including one limited edition line). Recently I’ve had an opportunity to smoke the Lot 8613 in the Toro vitola. Since its inception, Nomad Cigar Company has built up an impressive portfolio of blends. With the Nomad Esteli Lot 8613, Rewey delivers yet again another excellent cigar.

Back in 2013, Rewey released a limited edition cigar called the Nomad Esteli Lot 1386. The cigar paid homage to Esteli, which has become a mecca for the Nicaraguan cigar industry. The “1386” represented the latitude (13 N)  and longitude (86 W) of Esteli, Nicaragua. The 8613 uses the latitude / longitude theme, but in this case it flips the coordinates. However, the Nomad Esteli Lot 8613 is a completely different blend from the Lot 1386. The Lot 8613 is produced out of Tabacalera Fernandez while the Lot 1386 was made at Guayacan Cigars’ factory.

While we mentioned this was the third regular production blend out of Nicaragua, Nomad did three new blends as a part of its Therapy line, so at press time three are currently six blends being produced in Nicaragua – all at Tabacalera Fernandez.

Without further ado, let’s take a closer look at the Nomad Esteli Lot 8613 Toro and see what this cigar brings to the table.

For the Nomad Esteli Lot 8613, the cigar incorporates an Ecuadorian Habano wrapper over an all-Nicaraguan blend.

The blend incorporates the use of Ometepe tobacco. When the Lot 8613 was announced, Rewey commented on how this played a role in the blend:

“It is also the second time I have worked Ometepe tobacco into a cigar – in this case for a different purpose. I actually started working with Ometepe when blending the C-276 in 2013. The Ometepe was a key ingredient to adding yet another layer of flavor and level of strength in what became a very complex cigar. With the Esteli Lot 8613 the Ometepe took a different route – playing more to the rustic sweetness the tobacco offers.”

The Nomad Esteli Lot 8613 is available in five sizes packaged in 21 count boxes.  For this line, the five sizes are rounded. This was the first regular production Nicaraguan line by Nomad to feature rounded vitolas (the previous two, S-307 and C-276 were box pressed offerings and the Dominican offerings are rounded) 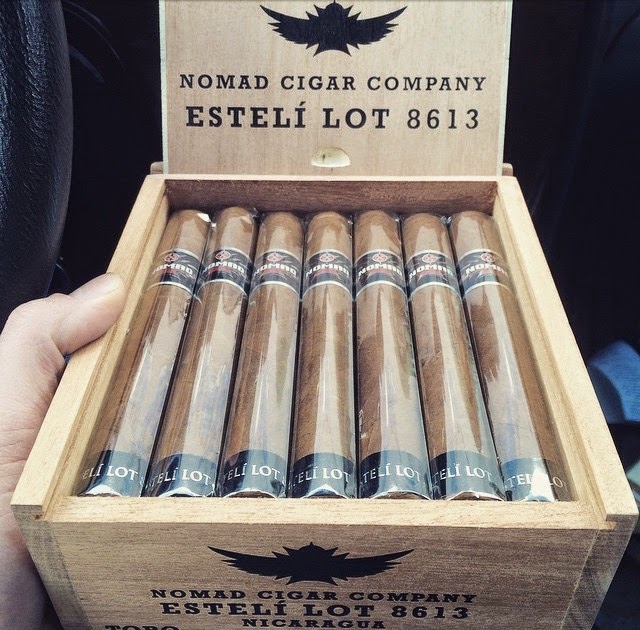 The Ecuadorian Habano wrapper had a medium brown color with a slight colorado red tint. There is a light coat of oil on the wrapper. While there are some thin visible veins and thin visible wrapper seams, this is a wrapper that I considered to be quite smooth.

There are two bands on the Nomad Esteli Lot 8613. The primary band is very similar to the Nomad S-307 and Nomad C-276. The band features a black, silver, and red color scheme. The background is black in color. Highlighting this band is the winged Nomad logo with a navigator symbol at the top. The text “NOMAD” is on the logo in a white colored modern style font. Toward the lower right side of the front of the band is the text @GODFADR (which is Rewey’s Twitter handle). The upper and lower part of the band is finished in silver trim.

The secondary band is on the footer. It is black in color with the text “ESTELI LOT 8613” in silver font.

Prior to lighting up the Nomad Esteli Lot 8613 Toro, I went with my usual choice of a straight cut. Once the cap was clipped, I moved on to the pre-light draw. The cold draw provided a mix of natural tobacco and floral notes. I also detected some notes of cedar and chocolate that added a touch of sweetness. Overall, I considered this to be an excellent pre-light draw. At this point I removed the footer band from the Lot 8613 Toro, lit up my cigar and moved on to the smoking stage.

Right out of the gate, the Nomad Esteli Lot 8613 Toro produced notes of cedar with a touch of white pepper. The spices receded into the background and gave way to notes of natural tobacco, chocolate, and a slight cherry cream note that smoothed the overall profile. At the same time, I detected notes of cedar and white pepper on the retro-hale.

Throughout the first third, the natural tobacco notes were primary. Very close to the forefront was the cherry-cream combination. Further in the background I picked up the chocolate, cedar, and white pepper notes.

During the second third of the Nomad Esteli Lot 8613 Toro, the natural tobacco notes remained primary, but now the chocolate notes were on the edge of the forefront. The cherry-cream, cedar and pepper spice were also present, but further in the background.

In the final third, the natural tobacco notes still were in control, but now it was the cedar notes that closed in on the forefront. The chocolate, cherry-cream and pepper notes were more distant. This stage of the cigar had a little less smoothness, but still plenty of flavor. This is the way the cigar experience of the Nomad Esteli Lot 8613 Toro came to a close. The resulting nub was firm to the touch and cool in temperature.

When it comes to construction, Nomad Cigar Company has been one of the most consistent cigars in terms of excellent quality. The Nomad Esteli Lot 8613 Toro is no exception and this is reflected in the burn and draw. The burn path remained straight from start to finish. There was a slight amount of jaggedness on the burn line, but the touch-ups required were more for cosmetic purposes than anything. The resulting ash had a salt and pepper color scheme. This was also a firm ash that came off the cigar in nice clean chunks. The burn rate and burn temperature were both ideal. 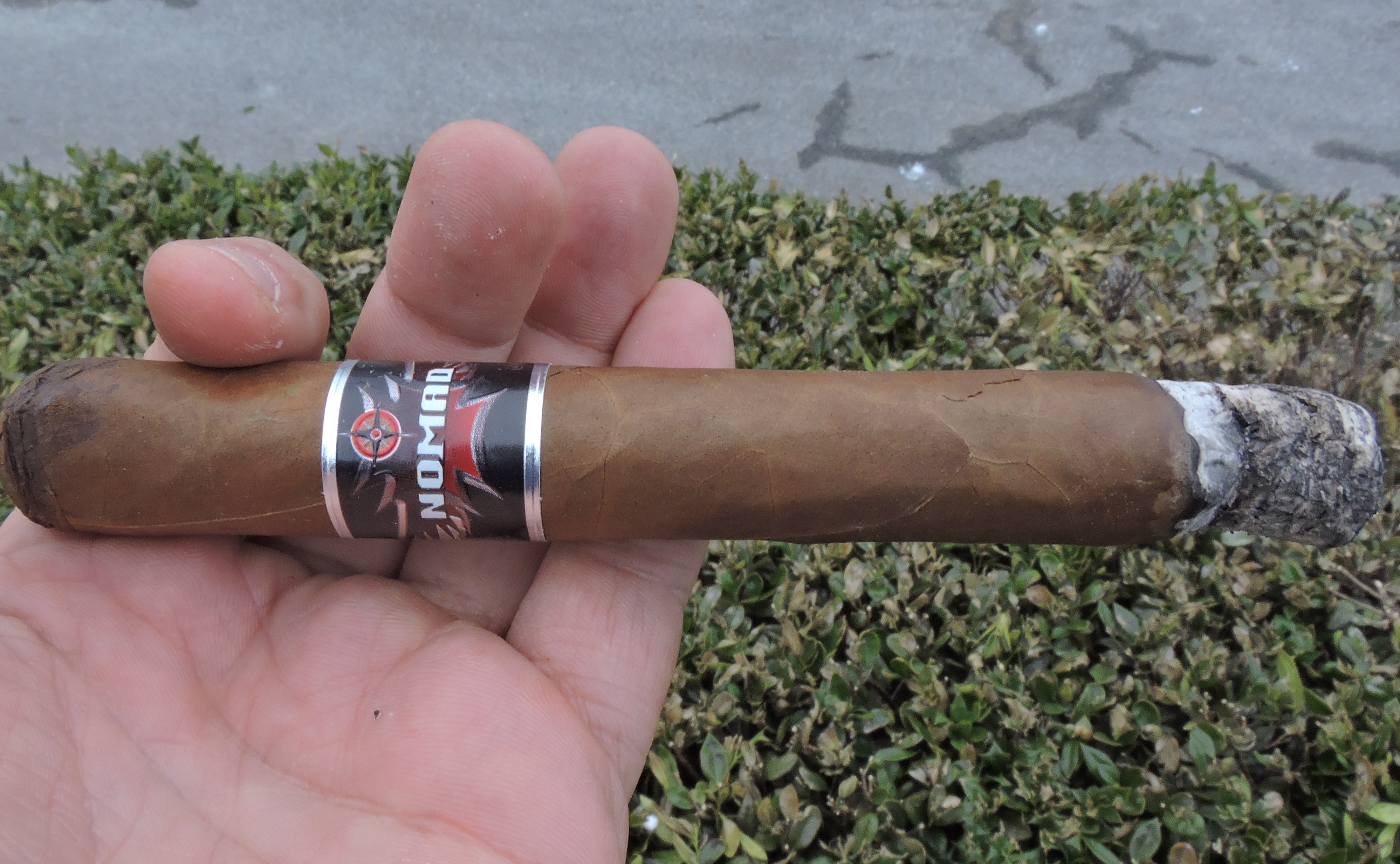 As for the draw, it had a touch of resistance to it – which is something I like. This made for an ideal draw in my book.

From a strength perspective, the Nomad Esteli Lot 8613 Toro is not a cigar that is going to overpower you with strength. I found this cigar to be medium in strength from start to finish. As for the flavors, they do start out medium-bodied, but there is a build up in the depth of the flavors. By the second half, I found these flavors were in the medium to full-bodied range. Looking at strength versus body, the body will have the edge.

Overall, the Nomad Esteli Lot 8613 Toro is an excellent cigar. One thing I do agree with is that this cigar does live up to the “rustic sweetness” that Rewey described. It complements the S-307 and C-276 lines nicely. If you consider the S-307 to be a “classic medium” and the C-276 to be a “close to full”, the Lot 8613 is going to call somewhere in between. Like the S-307 and C-276 (cigars that made the Cigar Coop Top Ten Aged Cigars for 2014 and 2015 respectively), this is a cigar that is aging very nicely. It’s a cigar that I can recommend to an experienced or novice cigar enthusiast. As for myself, this is a cigar I would definitely smoke again and one that is worthy of a box split.