In 2010, William C. (Bill) Paley decided to resurrect an old cigar brand that his family produced called La Palin. It was back in 1896, when Paley’s grandfather Samuel Paley opened a cigar store in Chicago named Congress Cigar Company. He produced a cigar called La Palina that was named after his wife Goldie Drell Paley. When Samuel retired so did the La Palina brand, until his grandson Bill Paley decided to make a go of it again. For his first line, Bill Paley’s goal was to make the best cigar he could possibly make. To accomplish this, he collaborated with the Graycliff Cigar Factory in the Bahamas and created the ultra-premium La Palina Family Series. Since then, Paley has grown La Palina into one of the top boutique companies in the industry. At the 2013 IPCPR Trade Show we learned the Family Series and the relationship with Graycliff would come to an end, but that would not be the last of the Family Series. Paley decided to re-launch the Family Series out of the El Titan de Bronze factory in Miami, Florida – a factory where he had success with his La Palina Goldie and Mr. Sam lines. The La Palina Family Series would be rebranded as the La Palina Family Series Miami and feature an all new blend. Today we take a look at one of the offerings in that line, the Churchill sized La Palina Family Series Miami Pasha. While a very different cigar than what came out of Graycliff, it continues a tradition of excellence that Paley has established with La Palina as this is an excellent cigar.

The original La Palina Family Series pays homage to Bill Paley’s family with each vitola paying homage to a member of the Paley family:

For the La Palina Family Series Miami, the Pasha, Babe, and Alison now all share a common all-new blend. At press time, the Little Bill was not carried over.

We now take a closer look at the La Palina Family Series Miami Pasha and see what this cigar brings to the table.

All three sizes are offered in ten count boxes featuring a lid that affixes to the box via magnets. 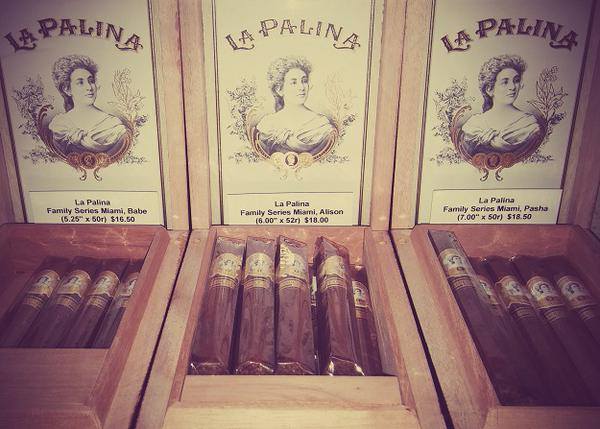 The Pasha is also offered in a 20 count box where each Pasha cigar is packaged in an individual coffin.

The Ecuadorian Corojo wrapper of the La Palina Family Series Miami Pasha has a medium brown color with a light coating of oil on it. There are some visible veins, but the wrapper seams are well hidden. The footer of the cigar has the Pasha’s signature “brushed foot”. This consists of about a half inch coming up from the footer with no wrapper covering it.

There are two bands on the La Palina Family Series Miami. The primary band is the classic La Palina band found on several other La Palina line (and is the same one found on the original Family Series). The band features the black and white image of Goldie Paley is front and center on the band. The image is adorned with gold trim. Over the image is the text “LA PALINA” in a thin white font on a gold background. Below the image is the text “EST 1896” in a smaller white font that is also on a gold background.

There is a secondary band on each of the La Palina Family Series Miami cigars. It is gold in color with the text “FAMILY SERIES MIAMI” in black font. There are two black pinstripes across the top and bottom separated by a row of gold rivets. The text “Miami” sits on the middle of the inner black stripe on the lower portion of the band.

Prior to lighting up the La Palina Family Series Miami Pasha, I opted to go with my usual choice of a straight cut. Once the cap was removed, I proceeded with the pre-light draw experience. The cold draw delivered a mix of natural tobacco, cedar, and floral notes. Overall I considered the pre-light draw of this cigar to be excellent. At this point I was ready to light up the Pasha and see what the smoking phase would have in store.

The La Palina Family Series Miami Pasha started out with notes of natural tobacco, mixed fruit, and white pepper. During the unfinished portion of the cigar, I found the was a combination of mixed fruit and natural tobacco moved into the forefront. The wood and white pepper became secondary notes. I also detected a slight caramel note. Overall the cigar smoked quite smooth through the rough cut section. Meanwhile the retro-hale delivered a combination of pepper and cedar.

Once the Pasha moved into the finished (wrapper) portion of the cigar, the fruit and natural tobacco remained grounded in the forefront. There was now also a floral note that surfaced again. The floral notes, along with the caramel notes floated in and out of the forefront from time to time. The white pepper remained in the background. Meanwhile the wood and pepper remained in the background. This pattern continued throughout the first half.

As the Pasha moved into the second half, the fruit, caramel and floral notes significantly decreased. The wood notes expanded into a cedar sweet-spice and soon moved into the forefront joining the natural tobacco as primary notes. Meanwhile I still got a touch of white pepper in the background.

The last third saw the cedar become the dominant note. There still was a strong natural tobacco presence and the pepper now played much more of a role in overall the flavor profile. I also still detected some of the fruit notes in the background. This is the way the Pasha came to a close. The resulting nub was soft to the touch and cool in temperature.

From a burn standpoint, the La Palina Family Series Miami Pasha scored nicely. The cigar maintained a straight burn path from start to finish. The burn line itself had a slight curvature, but was never in danger of tunneling nor canoeing. I was particularly impressed how clean the cigar burned through the brushed section of the cigar and transitioned to the finished section. This was done with minimal flaking and with an ash that was firm. The ash itself had a silver-gray color to it. I also found the Pasha maintained an ideal burn rate and ideal burn temperature throughout the smoking experience.

The draw to the Pasha  had a touch of resistance to it. This is something I like on a cigar and it made the Pasha an enjoyable cigar to puff on.