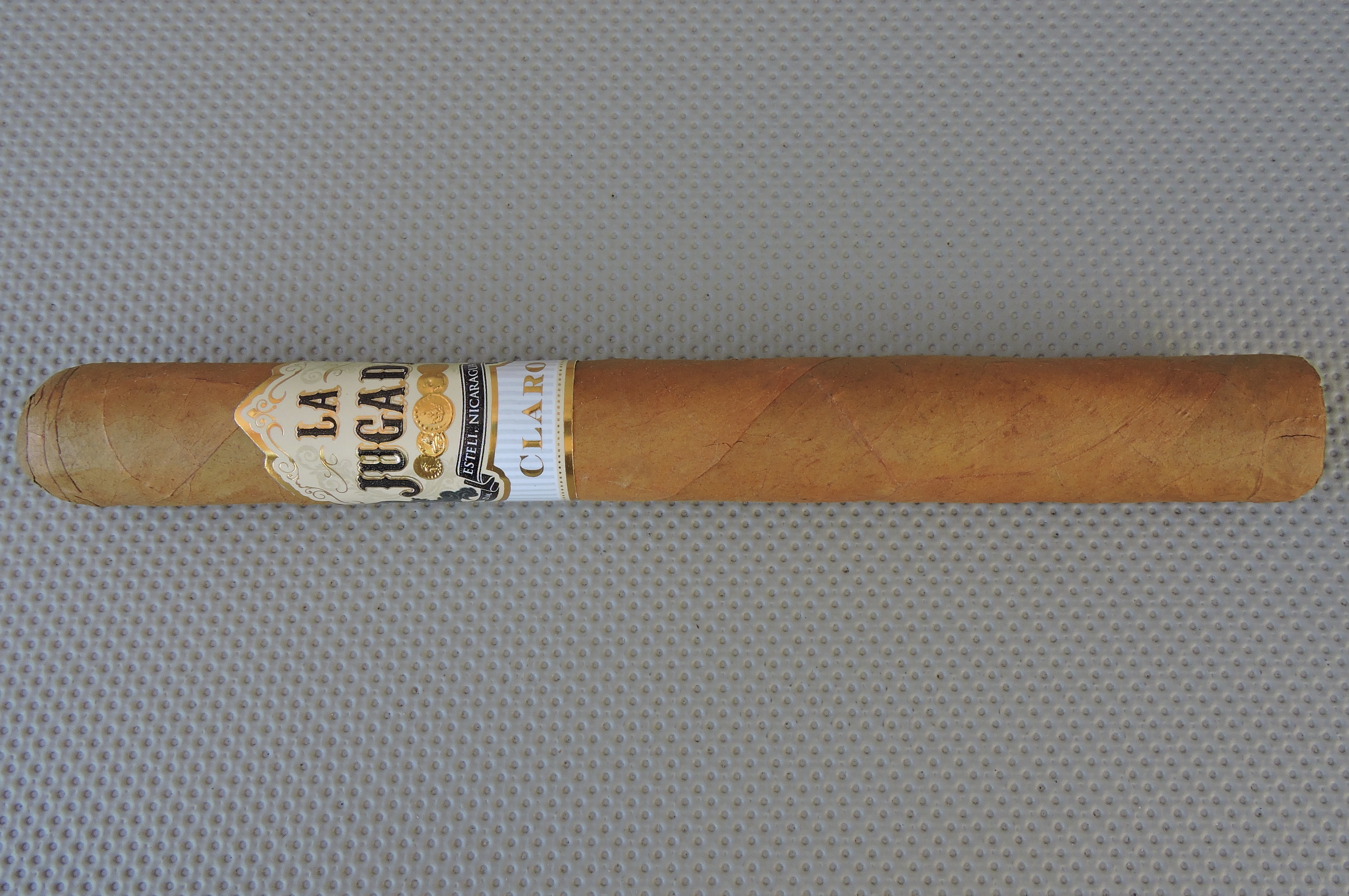 The name La Jugada translates to “the move” or “the play”. It stems from Moya and Ruiz’s love of games such as dominoes and poker. It’s actually been some time (2013) since a regular production line blend has come to the La Jugada line (there was 2014’s limited edition La Jugada Nunchuck). In addition to the Prieto, Habano, and Claro offerings under La Jugada, MoyaRuiz also has one other regular production line called The Rake.

Without further ado, let’s break down the La Jugada Claro No. 1 and see what this cigar brings to the table.

As with all MoyaRuiz offerings, the La Jugada Claro is made at Erik Espinosa’s La Zona factory. The blend was developed by Factory Operations Manager Hector Alfonso. In addition to Ecuadorian Connecticut wrapper, the blend features a Nicaraguan binder and filler.

La Jugada Claro is available in three sizes. Each of the three sizes is packaged in 20 count boxes. 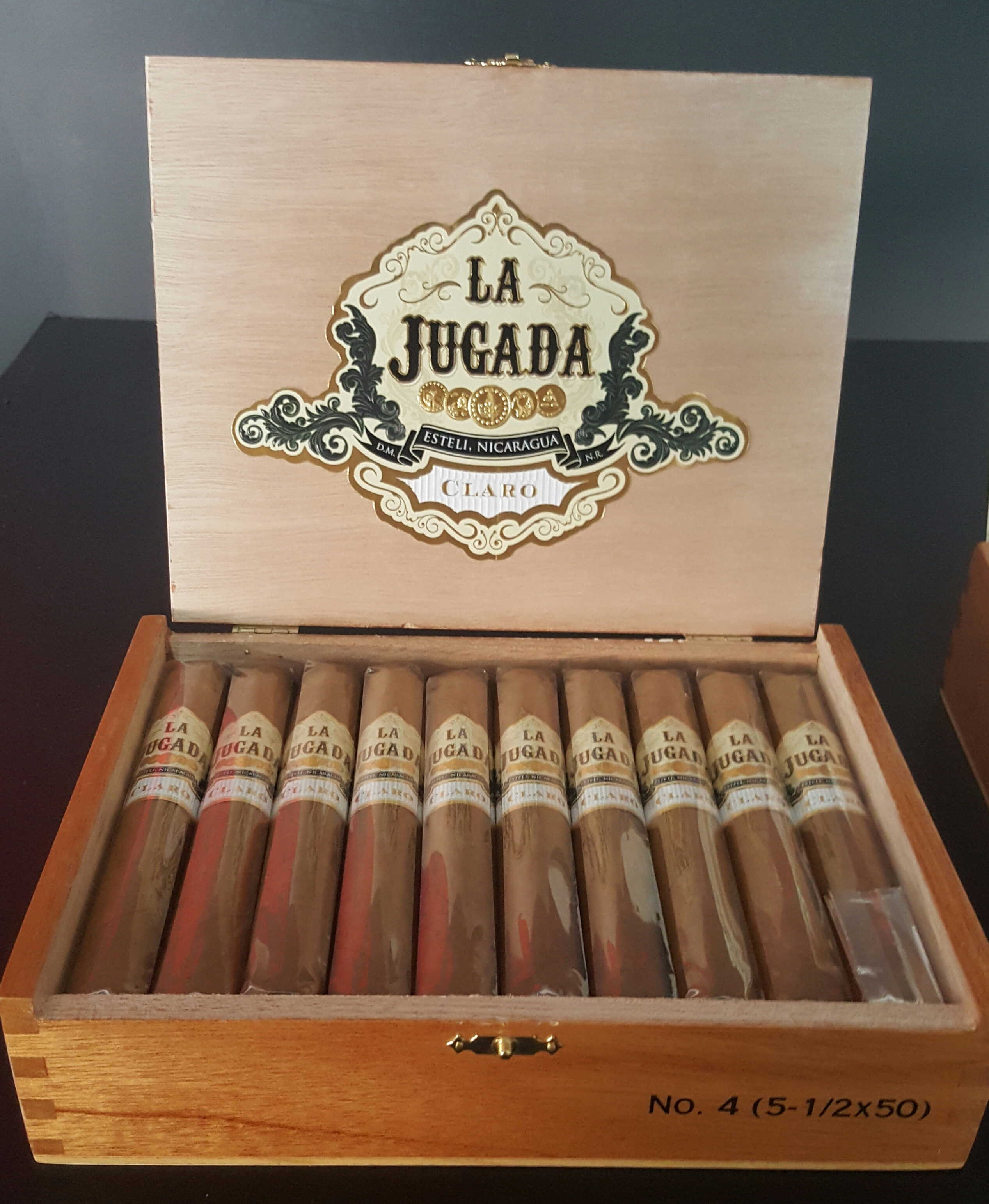 The Connecticut Shade wrapper of the La Jugada Claro No. 1 has a classic light brown color to it. The wrapper itself has a light coat of oil on it. There was a slight bumpiness to the wrapper – which gave the cigar a nice charm. The wrapper had some visible wrapper seams. Any visible veins were on the thin side.

The primary band features the text “LA JUGADA” in dark gray classic styled with gold trim font sitting on a pale yellow background. There are five gold medallions below the text. Below the medallions is a gray ribbon with the text “ESTELI, NICARAGUA” in a white-colored font. On the left side of the ribbon is the text “DM” and on the right side is the text “NR” – the initials of the company founders. The remainder of the yellow field has gold and gray / green adornments. Surrounding the band is almost a gray / green pattern with a pinstripe effect. Below the pale yellow field is the text “ CLARO” in gold font sitting on a white background background – also with a gray pinstripe pattern.

Prior to lighting up the La Jugada Claro No. 1, I went with my usual choice of a straight cut. I did find this wrapper was on the delicate side, to the cut should be done with a little bit of tlc. Once the cap was clipped, I moved on to the pre-light draw experience. The dry draw of the La Jugada Claro No. 1 was a classic Ecuadorian Connecticut Shade profile as I detected notes of cream and wood. There was a slight citric component to this dry draw as well. Overall I considered the pre-light draw of this cigar to be a satisfactory one. At this point, I was ready to light up my cigar and see what the smoking phase of the La Jugada Claro No. 1 would have in store.

The La Jugada Claro No. 1 started out with a mix of cream, citrus, cedar and classic wood notes. Early on, the cream and citrus notes moved to the forefront while the combination of cedar and woody notes became secondary. The retro-hale produced an additional (but not overpowering) layer of cedar with some black pepper mixed in.

As the Claro No. 1 moved through the first third, the cream notes began to get richer and by the start of the second third, it became the primary note. The citrus joined the cedar and woody notes in the background. I also detected a slight amount of black pepper on the tongue.

By the midway point, the cedar made its way into the forefront joining the cream. As the Claro No. 1 moved further into the second third, the cedar notes began to take over as the primary note. While the sweet-spice from the cedar was present, the classic woody note diminished.

During the final third of the La Jugada Claro No. 1,  the cedar still remained the primary note. There was an increase in the black pepper, but it was not overpowering. The citrus and cream were now more distant. This is the way the cigar experience came to a close. The resulting nub was firm to the touch and cool in temperature.

La Zona has really built up an impressive record of consistent well-constructed cigars and the La Jugada Claro No. 1 is no exception. The Claro No. 1 maintained a straight burn path from start to finish. The burn line was slightly jagged, but in most cases didn’t even warrant a touch-up. The resulting ash was on the firm side and had a salt and pepper color scheme to it. Meanwhile, the burn rate and burn temperature were both ideal. 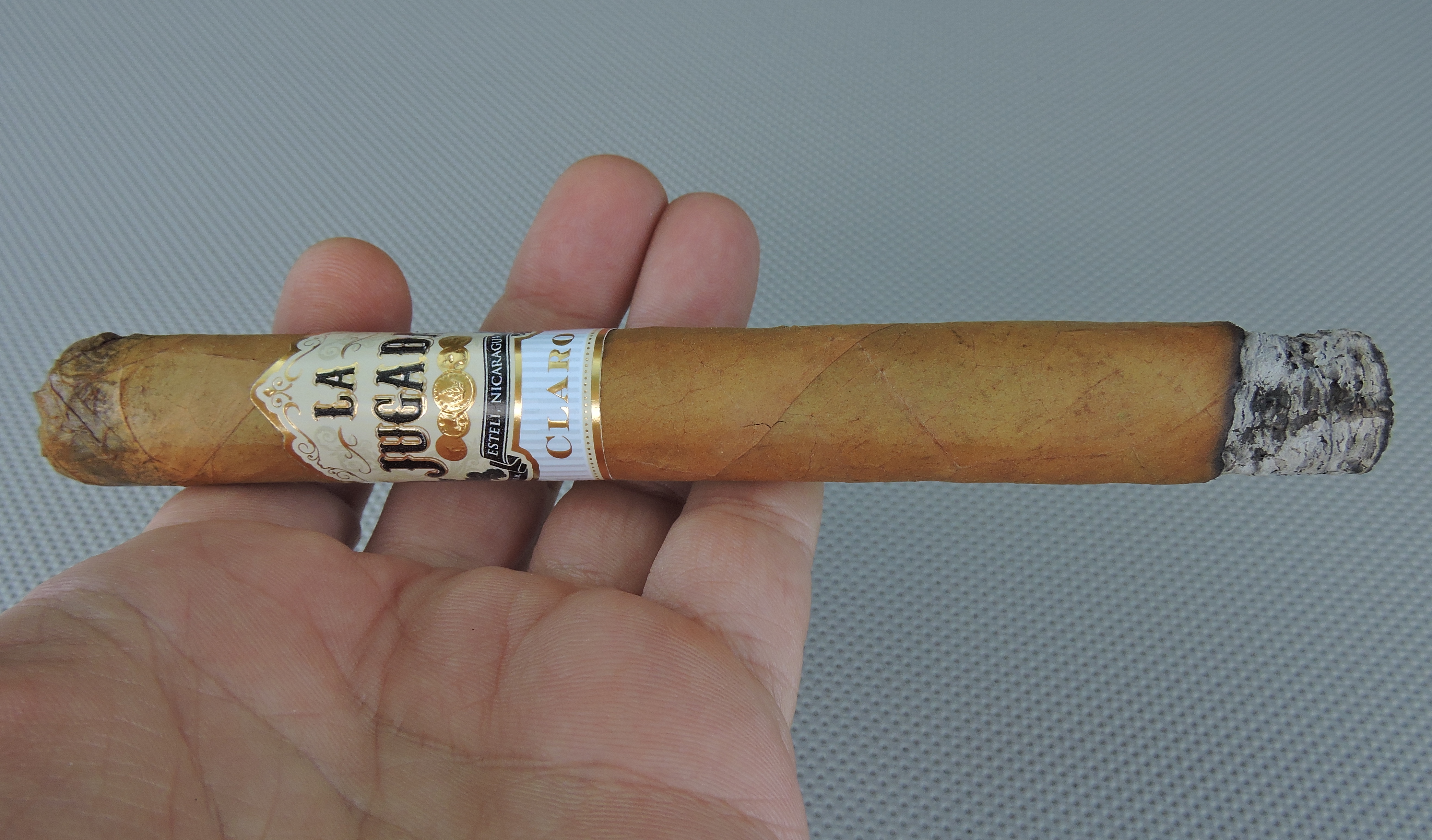 Burn of the La Jugada Claro No. 1

As for the draw of the La Jugada Claro No. 1, this also was ideal. It wasn’t too tight, nor was it too loose. There was a nice amount of smoke production. Overall this was a low maintenance cigar to derive flavor from.

When the La Jugada Claro No. 1 started out, this seemed like it was going to be a classic milder Ecuadorian Connecticut profile – namely I found this cigar to be mild in strength and mild to medium in body.

The body of the La Jugada Claro No.1 builds up a little slower, but it does also increase. By the last third, I also found the Claro No. 1 to be delivering medium-bodied flavors.

In terms of strength versus body for the Claro No. 1, the body has a slight edge throughout the smoking experience.

In a lot of ways, the La Jugada Claro No. 1 is a cigar that not only fills a spot in the MoyaRuiz portfolio, but very much fits in with what MoyaRuiz is all about. No doubt, a Connecticut Shade offering is something that MoyaRuiz didn’t have. However, MoyaRuiz is a little about unpredictability. The way the Claro No. 1 increased in strength and body was something I wasn’t expecting – especially considering the milder profile at the beginning.  It isn’t that the cigar is going to evolve into a bold, power-bomb, but by the end of the cigar there is a noticeable difference in strength and body than what was at the beginning. In the end, it’s a very good and satisfying Connecticut Shade. It’s a cigar I could recommend to any cigar enthusiast – any time of the day. As for myself, this worthy of a box split.