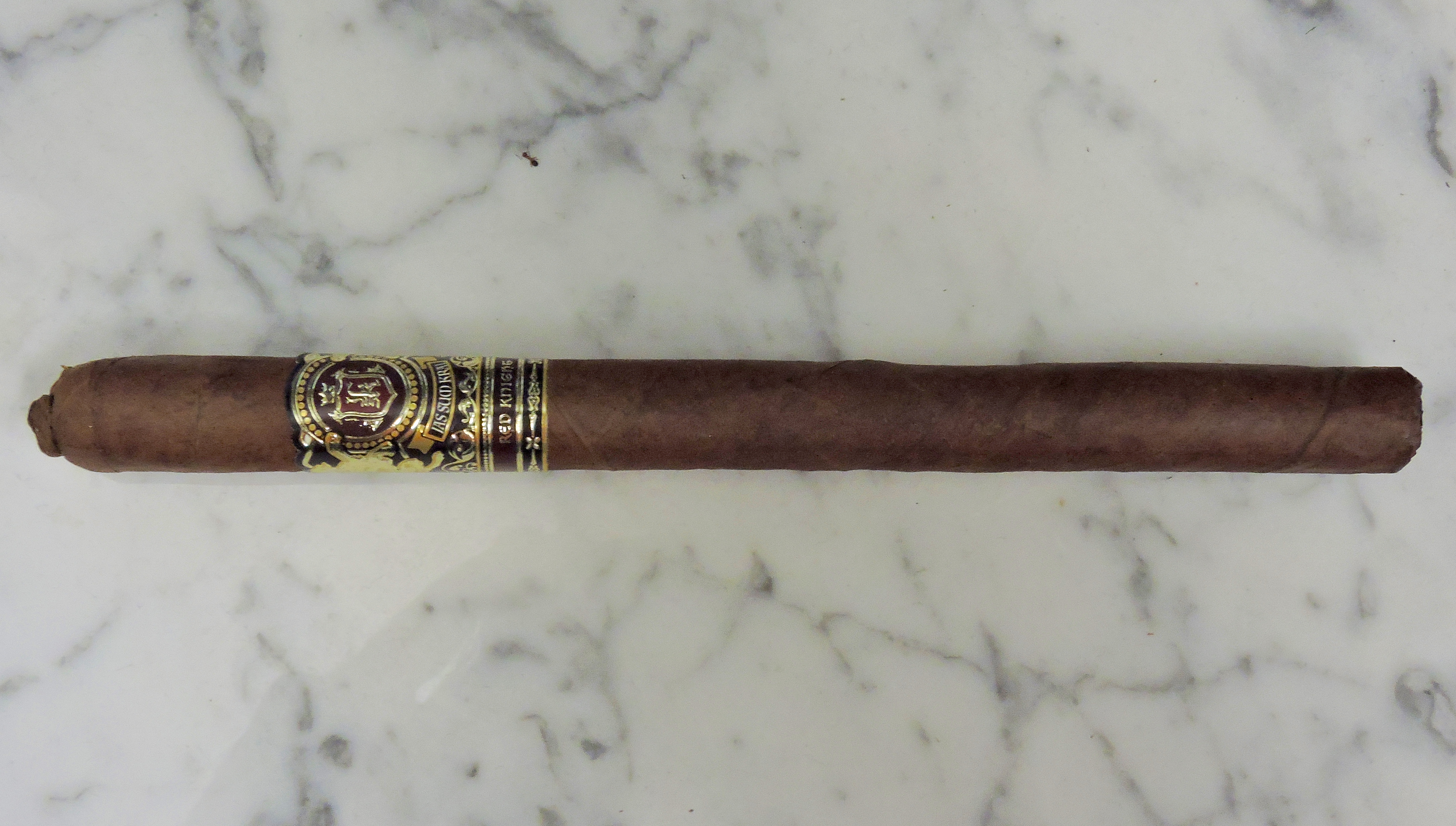 The Jas Sum Kral Red Knight is the first line released by Jas Sum Kral cigars. Jas Sum Kral was launched by Riste Riatevski. After being disappointed with many cigars on the market, Riatevski set out to create his own cigar. His goal was to create a cigar that maintained Cuban tradition, but add his own twist on things. In order to accomplish this, he realized he was going to have to find someone who would allow him to be a part of the actual blending process. He would eventually hook up with Noel Rojas and the New Order of the Ages (NOA) factory. Rojas is one of the rising stars in the cigar industry and in addition to making his own brand (Guayacan), he is making quality cigars for many other boutique cigar companies. Today, we take a look at the Jas Sum Kral Red Knight in the lancero format. While normally a lancero is not my vitola of choice, I found it to be an excellent option in this line providing an outstanding cigar experience.

As for the name Jas Sum Kral, that comes from Riatevski ‘s Macedonian roots. The name translates to English “I am King”. It was almost a year ago, when Riatevski launched Jas Sum Kral cigars with the Red Knight in one size – a Toro. After selling some of them online, demand for the cigar soon came from the retail community in both the U.S. and Europe. Demand also came for some more sizes, so earlier this year, the line was expanded to four vitolas. In addition, Riatevski has Maduro and Connecticut Shade options coming.

The Jas Sum Kral Red Knight Lancero’s Ecuadorian Habano wrapper has a medium brown color. Depending on how the light shines on it, it may have a cinnamon-colored tint to it. Upon closer examination, there was slight amount of darker marbling. There was not much oil on the wrapper. Most of the wrapper seams and visible veins were on the thin side. The cap has a spiral pig-tail affixed to it while the footer of the cigar is covered.

The band is highlighted by a maroon, gold, black, and white color scheme. At the center of the band is a maroon shield with the initials “JSk” in a classic style gold font (the J and S are stacked on top of each other with a larger k to the right). Above the shield is a gold crown. Below the shield is a gold ribbon with a maroon colored strip on it. That strip contains the text “JAS SUM KRAL” in white font. Two gold lions surround the shield to the left and right. The remainder of the band contains mostly gold and black adornments. There is a maroon stripe that has the text “RED KNIGHT” in white font.

As opposed to pulling off the spiral pig-tail of the Jas Sum Kral Red Knight Lancero, I opted to use a straight cut to remove the cap. Once the cap was successfully clipped, I moved on to the pre-light draw. The cold draw was pretty much identical to what I got on the Toro as I got notes of natural tobacco, mixed fruit sweetness, and wood. Overall I considered the pre-light draw to be satisfactory. At this point I was ready to light up the Jas Sum Kral Red Knight Lancero and awaited what the smoking phase would have in store.

One thing that surprised me about the Jas Sum Kral Red Knight Lancero is I got a short blast of black and white pepper. This blast was not something that I had detected on the toro. Once the pepper spices subsided into the background, notes of fruit and wood emerged in the forefront. At the same time, this cigar very much had a “tobacco” profile. Meanwhile on the retro-hale, I got an additional layer of white and black pepper.

During the first third, the fruit note became primary. In addition, there were now some nut flavors present in the forefront with the fruit. Meanwhile the wood and pepper notes remained grounded in the background. As the cigar burned into the second half, the nut flavors started to emerge as the primary note. I also detected some baker’s spice mixed in with the pepper and wood in the background.

As the Jas Sum Kral Red Knight Lancero moved into the second half, the fruit sweetness diminished to a secondary note. Meanwhile the wood notes moved back into the forefront joining the nut flavors. As the cigar moved into the final third, the flavor profile turned more peppery and woody with both of these notes holding ground as the primary note. The nut and fruit flavors were now quite distant while the baker’s spice subsided.

The flavor profile of the Jas Sum Kral Red Knight Lancero remained consistent throughout the final third. While there was more spice at the end, it never assaulted the palate or left a harsh aftertaste. When the cigar came to a close, the resulting nub was firm to the touch and cool in temperature. 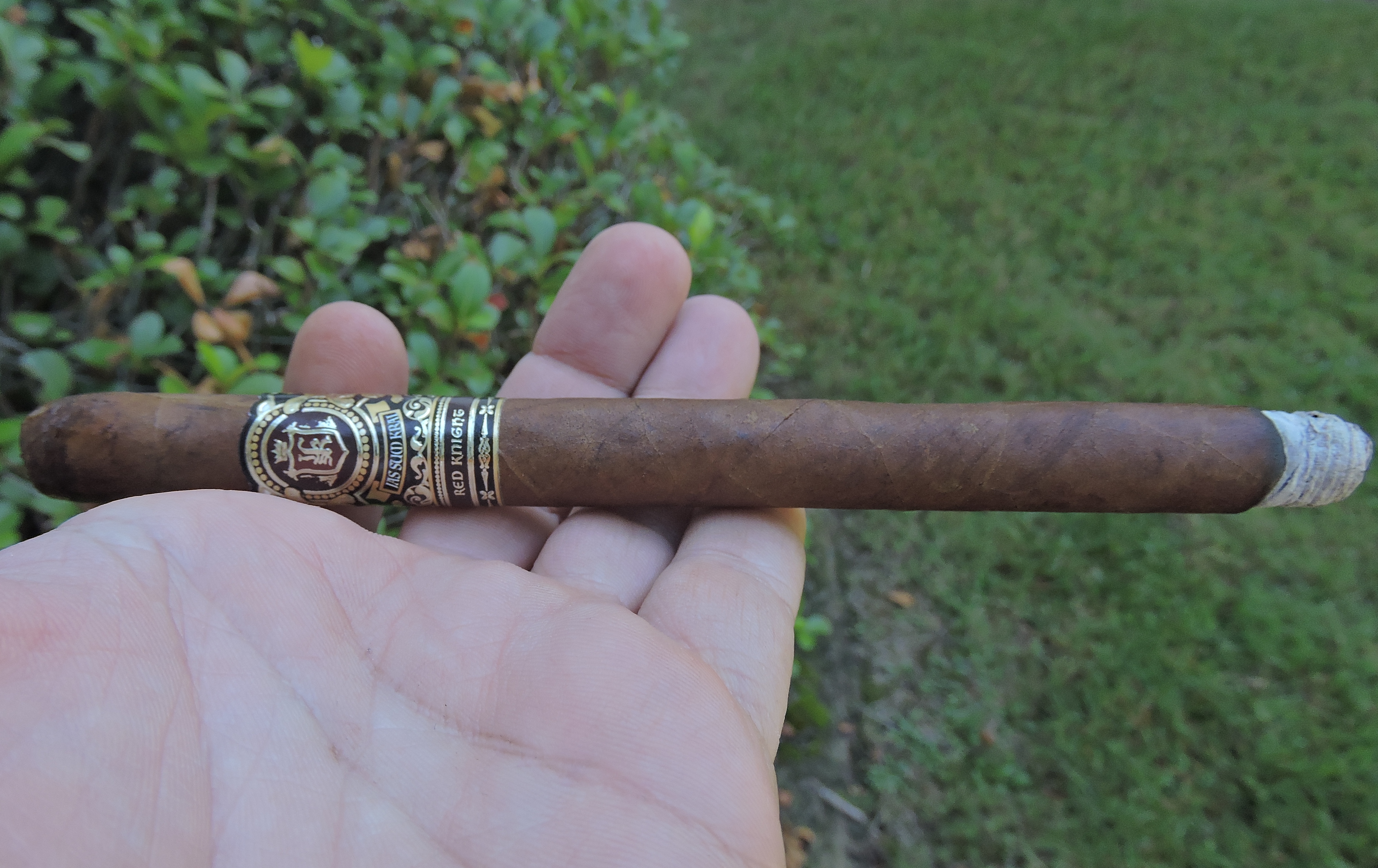 The draw was ideal as well to the Jas Sum Kral Red Knight Lancero – it was not too loose, nor was it too tight. This was a low maintenance cigar to puff on and derive flavor from.

Strength-wise, the Jas Sum Kral Red Knight Lancero started out a solid medium. There was a slight increase along the way, but I found toward the end the cigar remained in the medium range. From a body standpoint, the Lancero started out in the medium to full range. Like the strength, there was a slight increase in the body, but it would remain medium to full falling just short of full-bodied.

In terms of strength versus body of the Jas Sum Kral Red Knight Lancero, the body had the edge throughout the smoking experience.

As I have said, I don’t always subscribe that the lancero is automatically the best vitola in a line. Particularly when a larger ring gauge is taken down to a lancero, sometimes the changes that need to be tweaked in the blend don’t necessarily mean a positive. However, there is no such problem with the Jas Sum Kral Red Knight Lancero. As I much as I enjoyed the Toro, I enjoyed the lancero even better. While the Red Knight Lancero kept true to the great flavor profile of the Toro, the Lancero took it to another level. The flavors had a little more depth, a little more complexity, and just clicked together even better. This is a cigar I would recommend to an experienced cigar enthusiast, but it is not one I would discourage a novice from trying. As for myself, this is a cigar I would reach for again – and it’s certainly worthy of a box purchase.