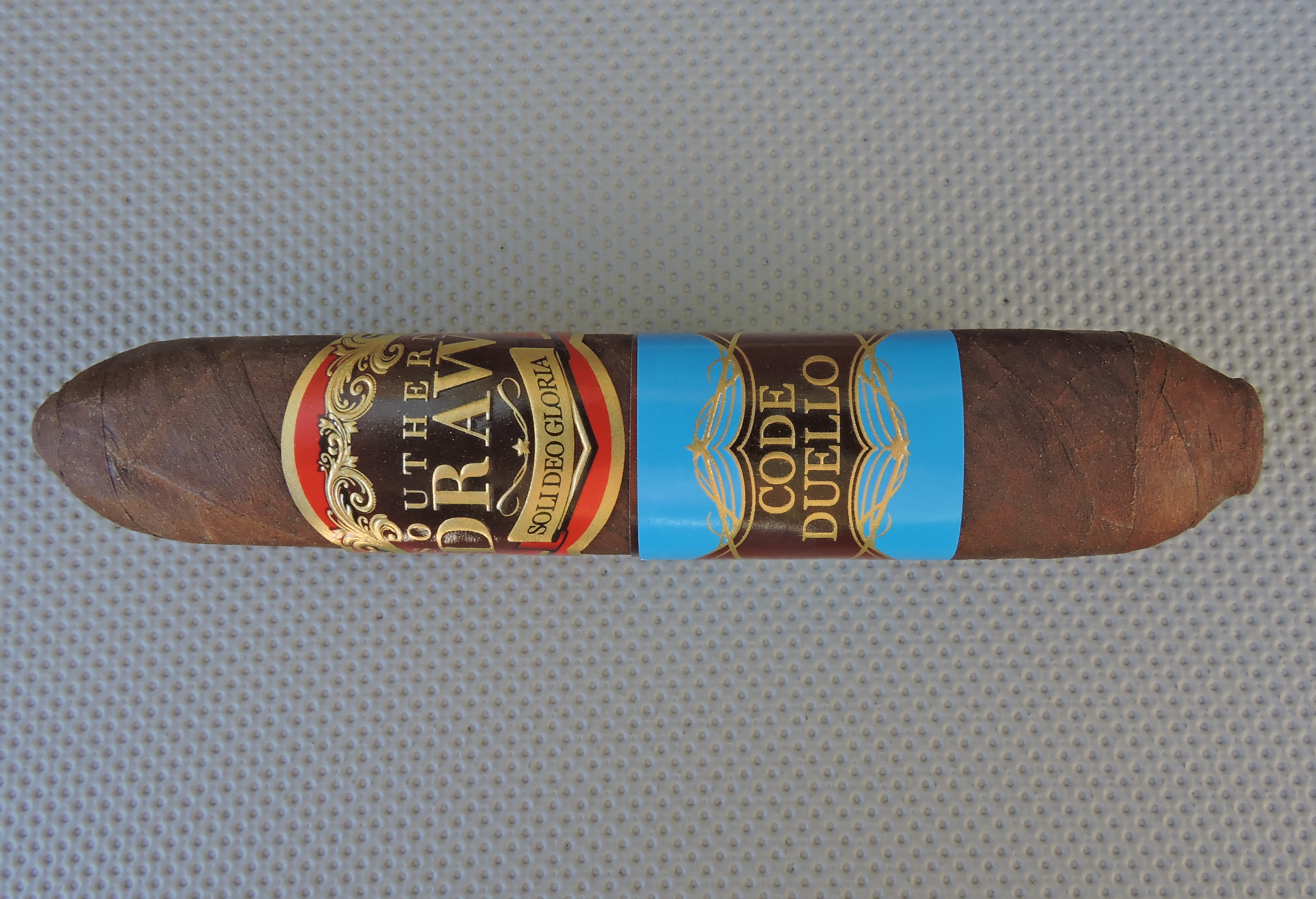 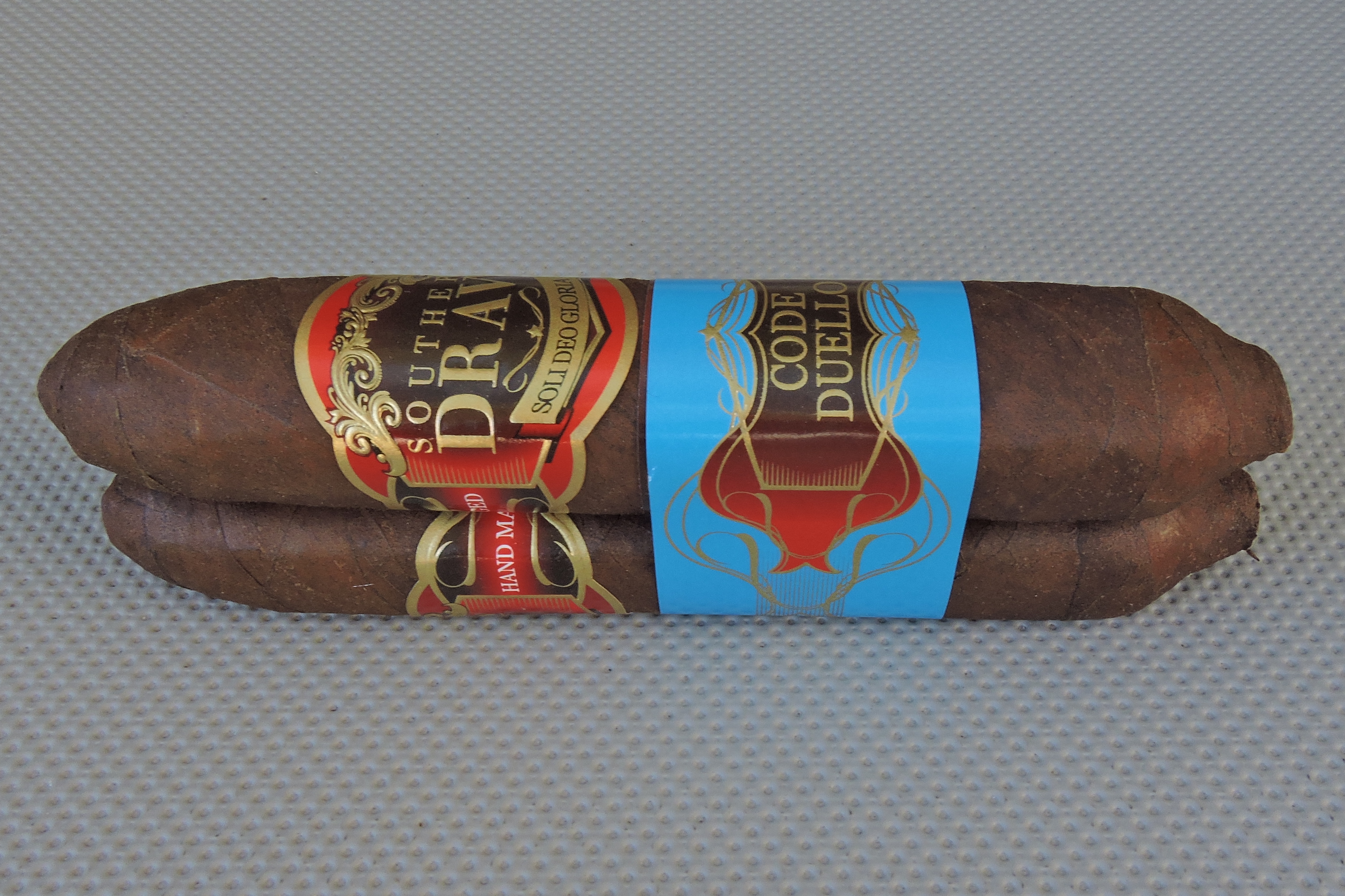 The concept of a Code Duello is something that can be traced back to the times of the Roman Empire. It is something that existed in Southern U.S. culture into the 19th century. While Southern Draw Cigars draws its inspiration from Southern culture, the concept behind the Code Duello project is meant to be gentlemanly, non-violent activity that can take place over a cigar. The company has outlined a set of “rules” by which this could be done.

Without further ado, let’s break down the Southern Draw Code Duello Kudzu 5 x 58 and see what the smoking experience brings to the table.

As mentioned there are two perfecto offerings in the Kudzu and Firethorn offerings. Each of these four perfectos are distinct blends. All four of the perfectos are also box-pressed offerings.

For completeness, we list the base blends below and highlight the differentiators for the four offerings.

The Habano Oscuro wrapper of the Code Duello Kudzu 5 x 58 had a medium brown color with a strong dark cinnamon tint. There was somewhat of an oily complexion to this wrapper. I found this wrapper to also have some darker mottling on it. Meanwhile, the surface of the wrapper was smooth as any visible veins and visible wrapper seams were on the thin side. The perfecto had a nozzle-shaped footer and a gentle tapering toward the cap. 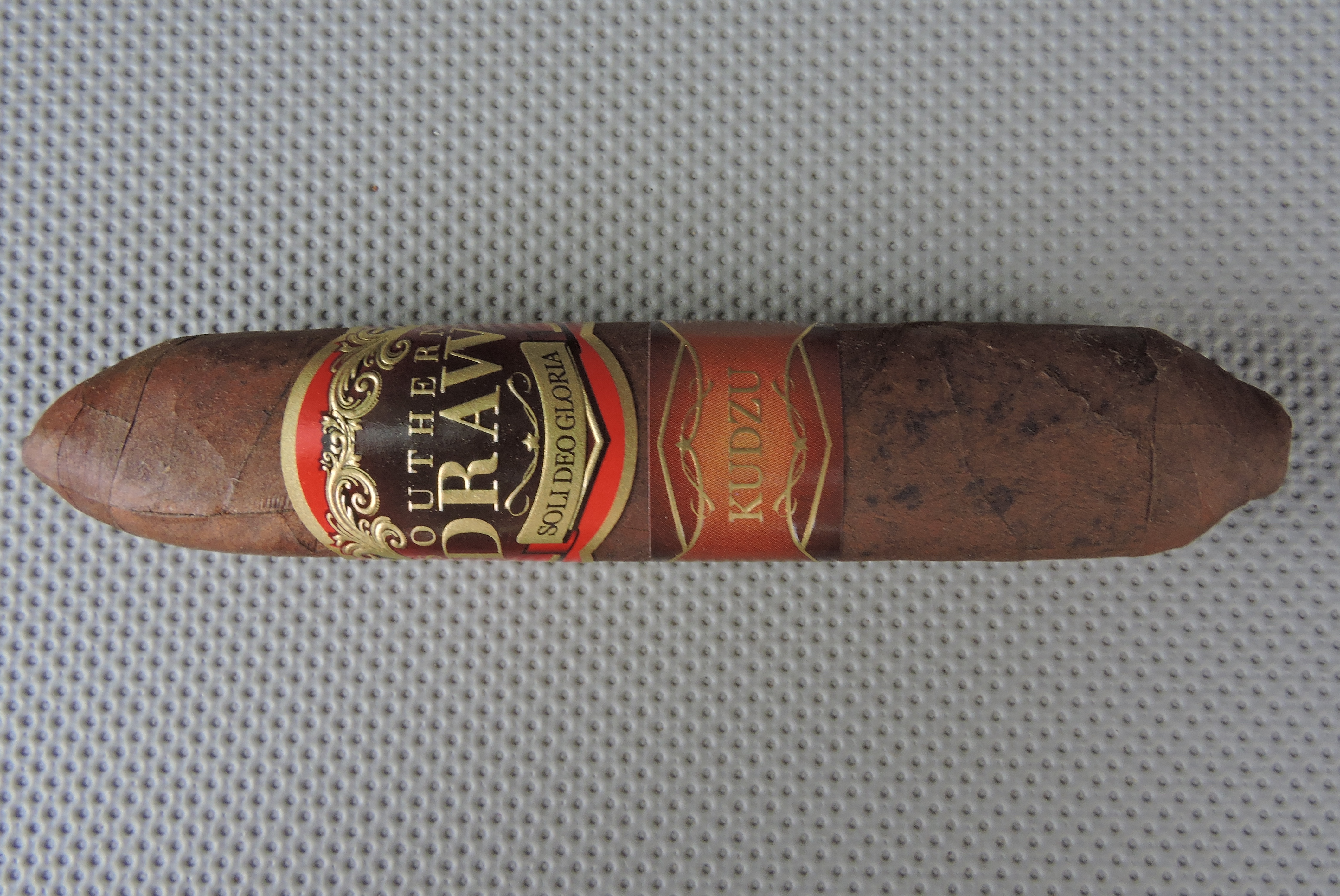 There are two bands on each individual Code Duello Kudzu. The text “SOUTHERN DRAW” is in gold font over a brown / maroon background. The brown / maroon background has a gradient effect to a red color along the sides. Below the text is a gold ribbon-like design with the text “SOLI DEO GLORIA” (which is Latin for Glory to God alone) in thin black font. On the left side of the band is the text “AGED” in white font on a red background.  To the right is the text “HANDMADE” – also in white font on the red.

There is a third, outer band used to attach a pair of cigars together. This band has a sky blue color to it. There is a brown / maroon design also has a gradient effect to red on the left and right. On that design is the text “CODE DUELLO” in gold font. There are also brown and gold adornments on the secondary band. There are also gold and red adornments on this band. 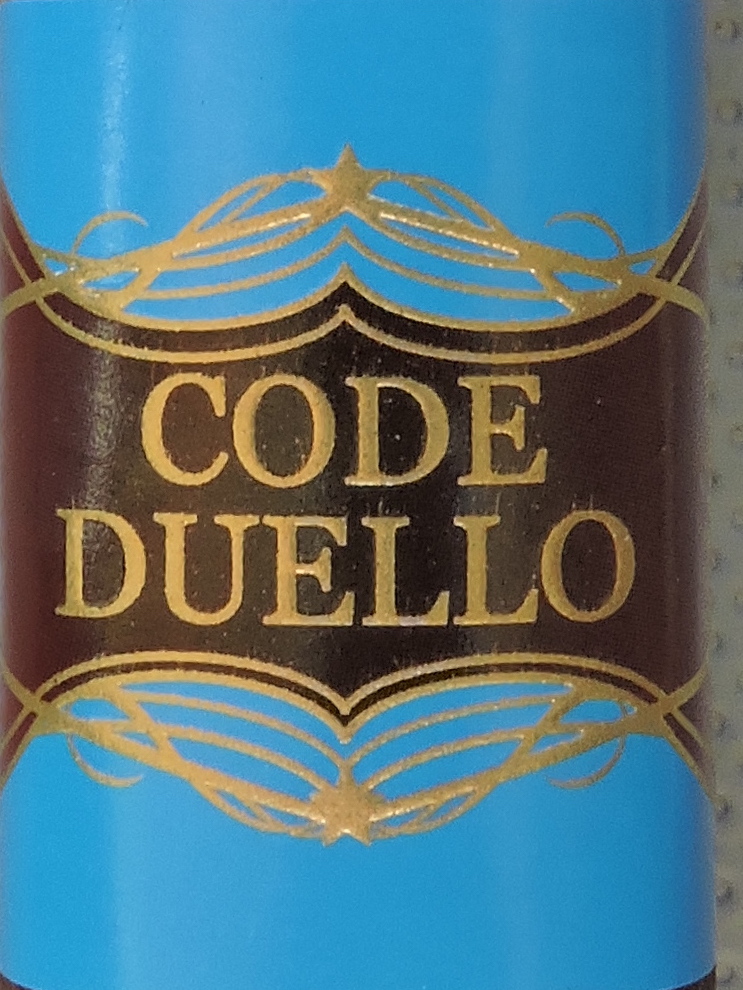 Close up of the Code Duello band

Before lighting up the Code Duello Kudzu Perfecto, I went with a straight cut. As have done with most of my perfectos, I used my Credo Special T cutter with the 36 ring gauge hole to get an ideal cut for this perfecto. Once the cap was removed, I moved on to the pre-light draw phase. The dry draw delivered a mix of cream and cedar notes. Overall I considered this to be a simple and satisfying pre-light draw. At this point I was ready to light up my Southern Draw Code Duello Kudzu Perfecto and awaited what the smoking experience would have in store.

The Code Duello Kudzu Perfecto 5 x 58 started out with notes of classic wood, cedar, natural tobacco, and black pepper. Early on, there was a creamy undertone which smoothed out the flavor profile. Very early on, I found the cedar, classic wood, and natural tobacco notes to form a unique fusion. In addition, this fusion had a sweet quality that reminded me reminded of the sweetness from a bourbon barrel. Meanwhile some coffee notes joined the black pepper in the background. The pepper was also prominent on the retro-hale.

Later in the first third, fused combination of cedar, wood, and natural tobacco remained present in the forefront, however some of the bourbon-barrel like sweetness diminished. Meanwhile the black pepper notes were still in the background but started to get a little sharper at times. The coffee notes remained in the background and there still was a slight creamy texture to the overall profile.

As the Code Duello Kudzu Perfecto 5 x 58 crossed the midway point, I found the flavors in the forefront had changed. The notes in the forefront now were more of a combination of classic wood and cedar. By this point, most of the natural tobacco notes and bourbon-barrel sweetness pretty significantly diminished. The pepper notes also began to approach the forefront. I still detected some coffee in the background but now I found less of the creaminess I detected early on.

The last third saw a combination of the wood, cedar and pepper notes present. Toward the very last stages, I found the cigar got a little harsh, but by this point it was time to put down the cigar. The Code Duello Kudzu Perfecto 5 x 58 finished up with a cool nub that was on the firmer side.

While there was a little bit of waviness on the actual burn line, I found the Code Duello Kudzu to maintain  straight burn path. There were some touch-ups along the way, but the amount required did not become excessive. The resulting ash had a salt and pepper color – and remained on the firm side. Meanwhile the burn rate an burn temperature were both ideal. 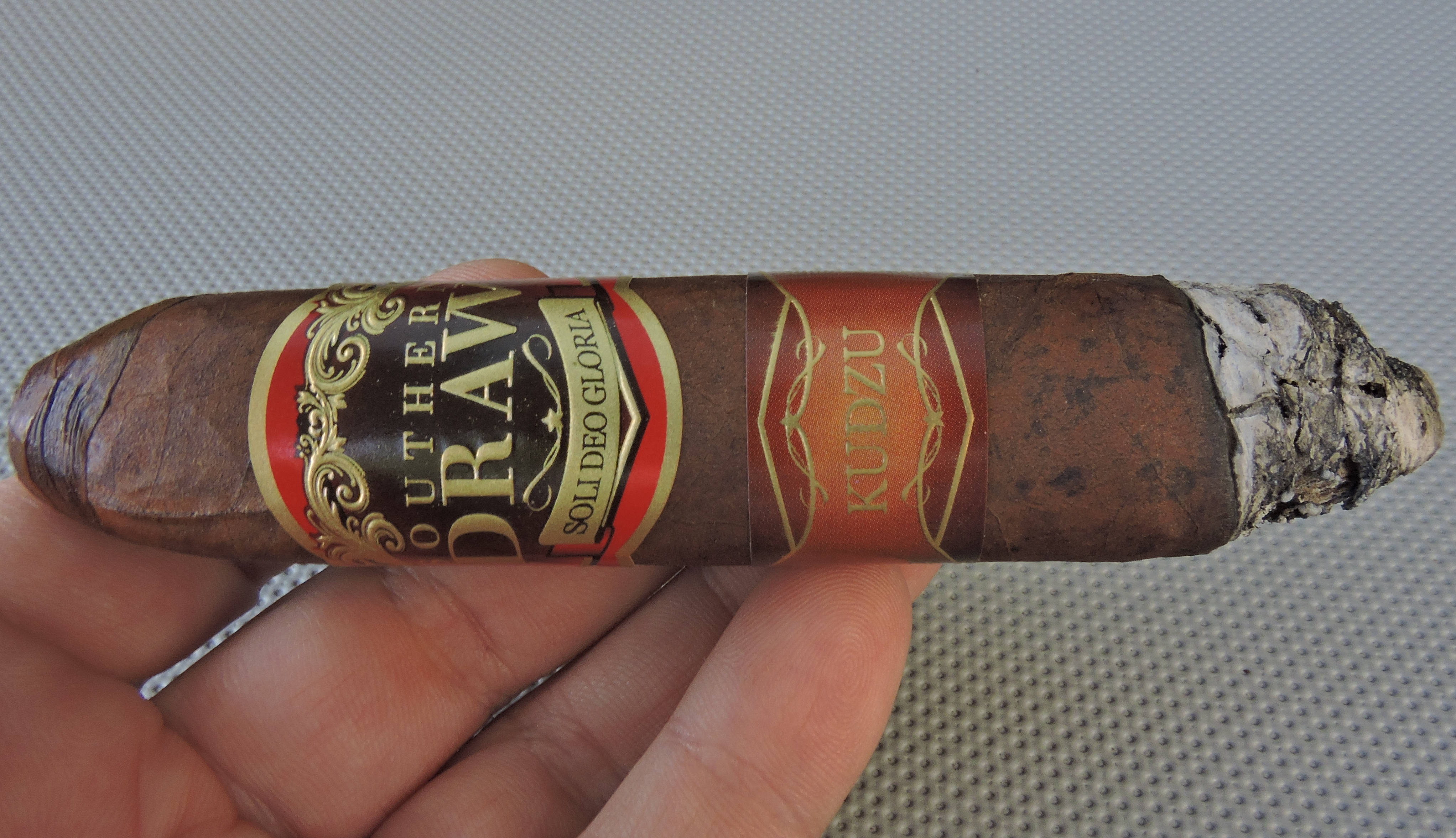 The draw to the Southern Draw Code Duello Kudzu was on the open side. With box-pressed perfectos, sometimes they can be packed looser; therefore I wanted to be very careful not to overdraw on this cigar so I wouldn’t get a hot burn. There were a couple of points where my gut told me this might happen, so I was able to head it off.

From a strength perspective the Code Duello Kudzu has one of those profiles where the strength sneaks up on you. The cigar did start out medium to full in strength, but by the second half the strength level definitely snuck up on me and I found this to be a full strength cigar. The body of the Code Duello Kudzu followed a similar pattern, starting out medium to full and progressing to full. The only exception is the increase in body did not sneak up like the increase in strength.

In terms of strength versus body, both attributes balance each other nicely with neither attribute overshadowing the other.

Overall I liked what the Southern Draw Code Duello Kudzu Perfecto 5 x 58 brought to the table. I did find this is a cigar where the flavors were better in the first half than the second half. I also liked the concept of the “cigar duel” and being able to enjoy one of these cigars with someone over conversation. On the other hand, this is also one of these cigars that has a lot to offer and when smoking this cigar solo and undistracted as there are plenty of nuances that can be picked up. Because this is a cigar that is on the fuller side, this is a cigar I would steer toward a more experienced cigar enthusiast. As for myself, this is a cigar I would definitely smoke again – and one that is worthy of a box split.