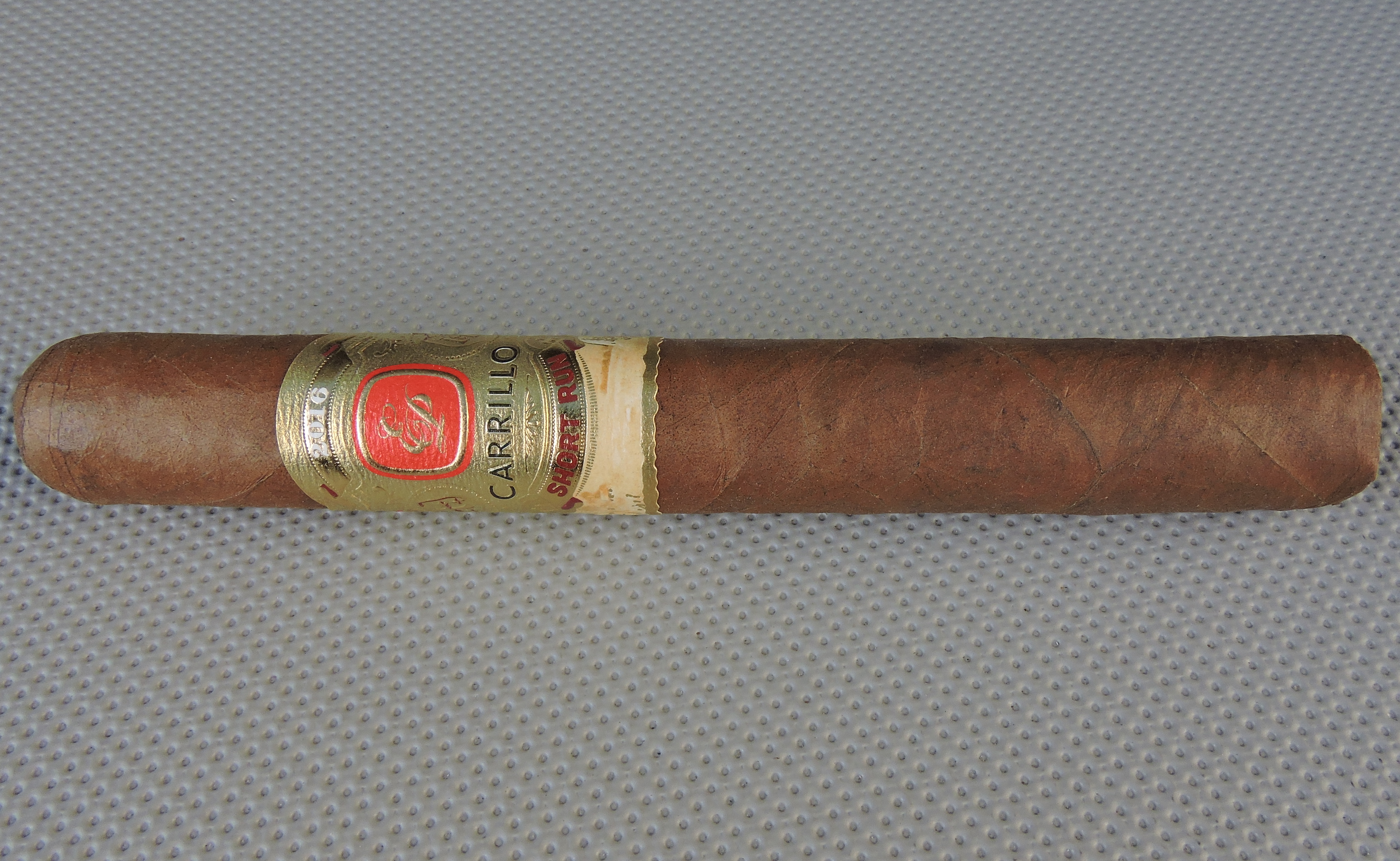 Just prior to the 2016 IPCPR Trade Show, E.P. Carrillo revamped its entire portfolio. As a part of the revamping, a new banding design was introduced across the whole portfolio. When the Short Run 2016 was introduced earlier this year, it actually provided a sneak preview of the new logo design.

Without further ado, let’s take a closer look at the E.P. Carrillo Short Run 2016 and see what this cigar brings to the table.

The Ecuadorian Habano wrapper of the E.P. Carrillo Short Run 2016 had a medium brown color. Upon closer examination there was some darker marbling. The wrapper itself had a light coating of oil. The wrapper seams are well hidden. There were some visible veins on the surface. Overall, I considered this wrapper to be slightly on the bumpy side.

The band to the E.P. Carrillo Short Run 2016 features a gold foil background on most of the upper 3/4 of the band. The new tweaked red and gold “EP” logo sits on the center. Above the logo is a gold ribbon design with the text “2016” in white font. Below the logo is the text “CARRILLO” in black font. Below that text is another gold ribbon design with the text “SHORT RUN” in red font. The remainder of the gold foil background has gold embossed adornments with a slight amount of bright red.

Meanwhile the lower portion of the band has light beige background. The left side of that background has a mountain / volcano-like image on the left with some white coloring mixed in. The right side has Master Blender Ernesto Perez-Carrillo’s name in a maroon font. Just above that is Perez-Carrillo’s signature in a brighter red font. There is also gold trim on the lower edge of the bend.

As I normally do, I went with a straight cut to remove the cap of the E.P. Carrillo Short Run 2016. After the cap was removed, I moved on to the pre-light draw. The dry draw delivered a unique natural tobacco sweetness that also had a floral component. There also was a dusty-like earth note present. Overall I considered this to be a satisfactory pre-light draw. At this point I was ready to light up the E.P. Carrillo Short Run 2016 and see what the smoking phase would have in store.

The E.P. Carrillo Short Run 2016 started out with a spurt of white pepper and some floral notes. It didn’t take long for the unique tobacco sweetness and dusty earth notes from the pre-light to emerge. The natural tobacco sweetness was a compound note that also incorporated floral, caramel, and vegetal qualities. This natural sweetness moved to the forefront early on. The dusty earth and pepper notes became secondary notes. There was a creamy texture present that kept the flavor profile smooth. Meanwhile there was an additional of white pepper on the retro-hale.

During the first half, the natural tobacco fusion continued in the forefront. The dusty earth and pepper remained secondary. There was a slight uptick in the pepper during the second half, but it still was very much a background note. The creamy texture continued to keep the flavor profile smooth. The retro-hale now delivered red pepper and cedar qualities layered in addition to the white pepper.

The second half of the E.P. Carrillo Short Run 2016 saw the the natural tobacco sweetness diminish. At the same time, the dusty earth notes intensified. By the last third, it was the dusty earth notes now in the forefront with the natural tobacco sweetness in the background. The sweetness still had the floral, caramel, and vegetal qualities. The pepper notes also remained present in the background. Right until the end, the Short Run 2016 maintained its creamy texture. The cigar closed with a nub cool in temperature and firm to the touch.

The E.P. Carrillo Short Run 2016 was a well-constructed cigar and this reflected nicely on the burn and draw. The cigar maintained a straight burn path from start to finish. There was a slight amount of jaggedness on the burn line, but overall this was a cigar that did not require frequent touch-ups. The resulting ash was light gray with some darker speckling mixed in. This was an ash that was firm and tight. Meanwhile the burn rate and burn temperature were both ideal. 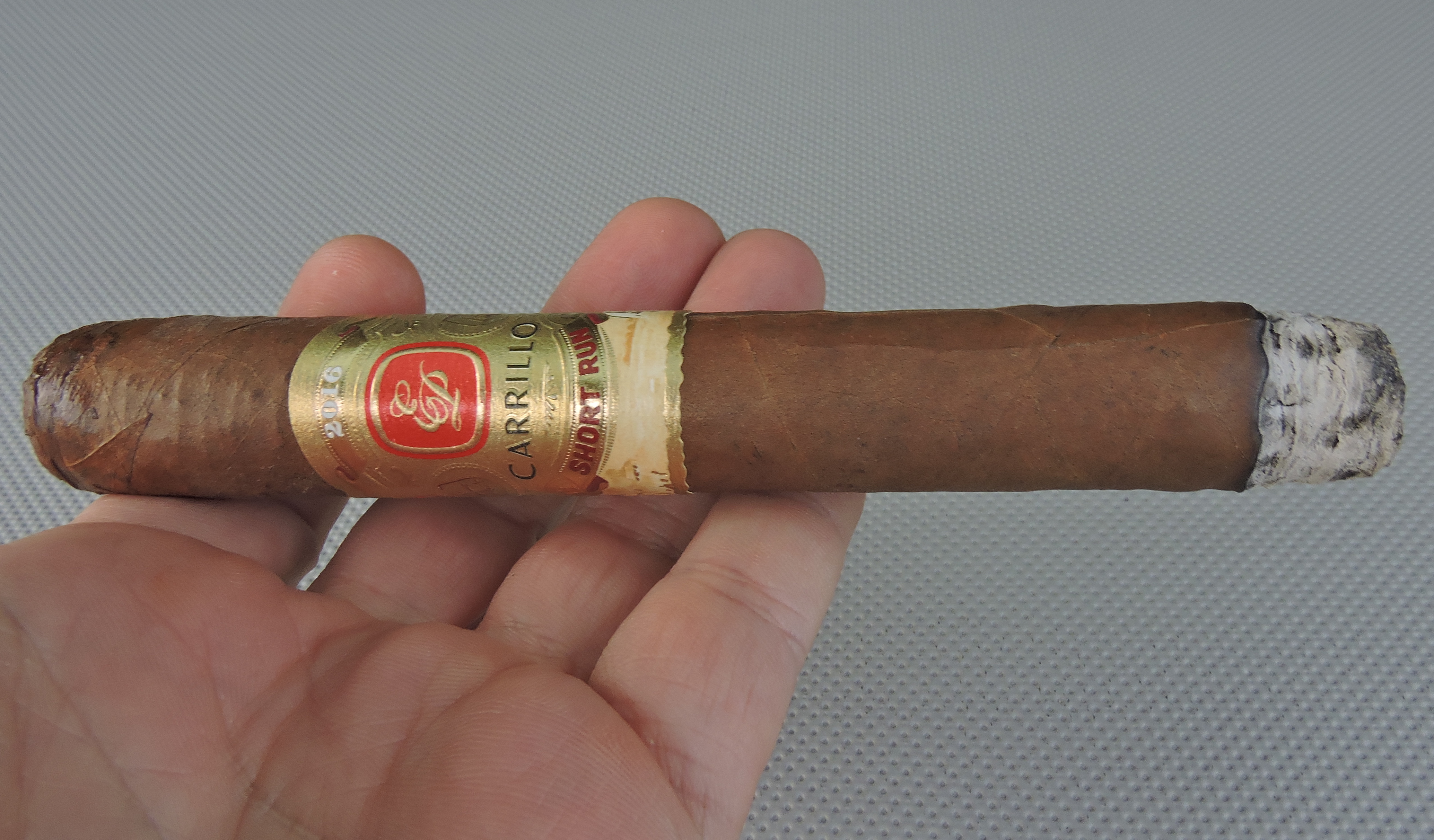 Overall the draw on the E.P. Carrillo Short Run 2016 was open, but not loose. Like the burn, I would categorize the draw as “low maintenance”.

One thing that will come to mind when smoking the Short Run 2016 is the word different. This is not only a different cigar from an E.P. Carrillo standpoint, but it’s a very different cigar in general. In particular, the sweetness of this cigar is something very different. As mentioned, the medium-bodied profile really worked well with the flavors of this cigar – and especially with the sweetness. This cigar won’t have a lot of radical flavor transitions, but there is a nice amount of flavor nuances. Finally, over the past six months, I found this cigar has already responded nicely to aging – and my gut tells me it still has some more aging potential. This is a cigar that I would recommend to a novice or experienced cigar enthusiast. As for myself, this cigar is one that I would smoke again – and one definitely worthy of a box purchase.