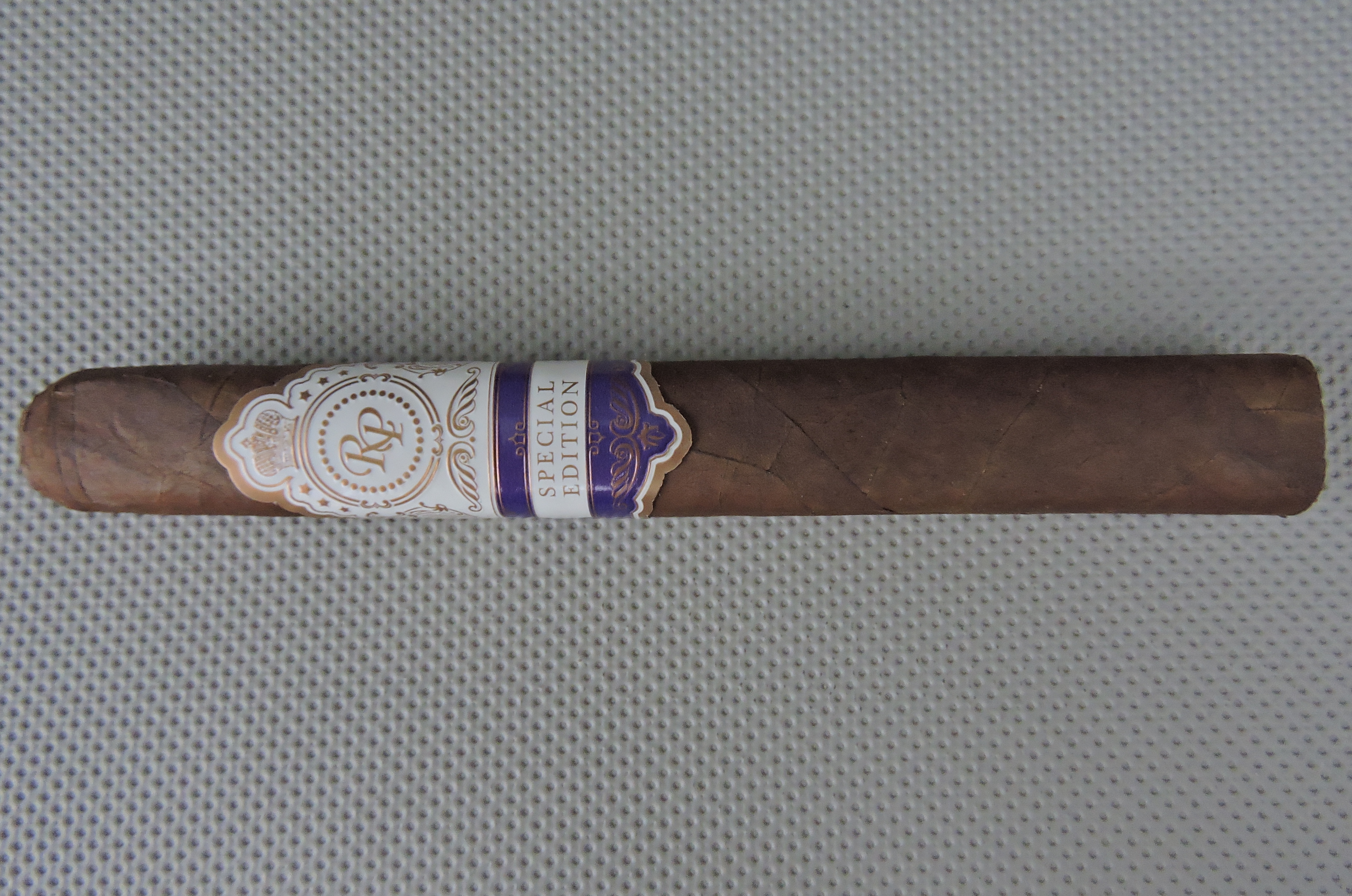 At the 2016 IPCPR Trade Show, Rocky Patel Premium Cigars debuted a new line called the Rocky Patel Special Edition. This is an offering by Rocky Patel that has been positioned as a brick and mortar offering, being limited to the company’s top 200 retailers nationwide. The cigar itself is highlighted by an eight year old Ecuadorian Habano wrapper. This past October, the cigar had a full nationwide launch to those 200 retailers. Recently I’ve had an opportunity to smoke this cigar in the Toro format. Overall, I found this to be an excellent and unique offering from Rocky Patel Premium Cigars and one worth keeping an eye out for. 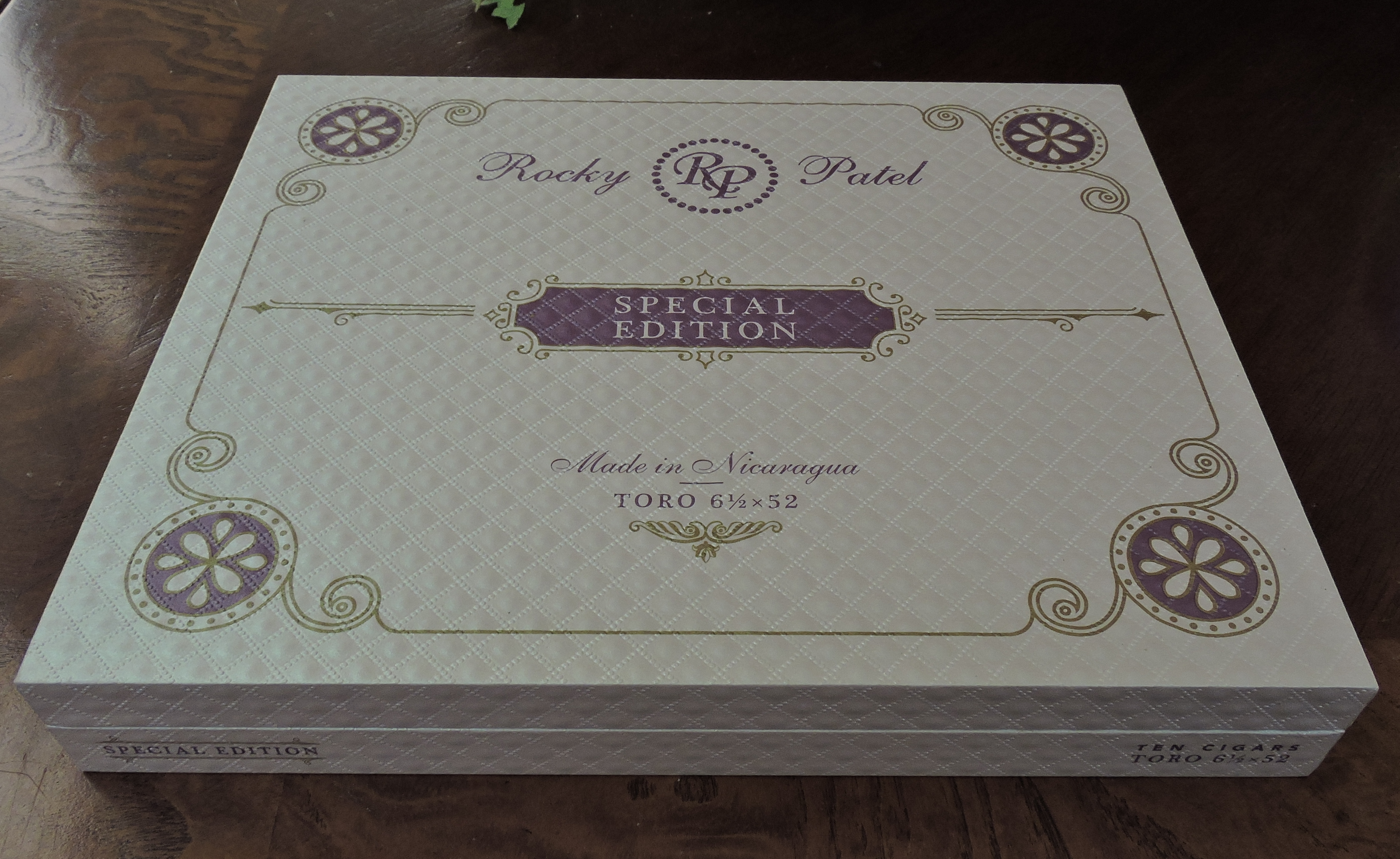 Over the years, Rocky Patel Premium Cigars has worked into becoming a vertically integrated company, and the Rocky Patel Special Edition is a reflection of that strategy. This cigar is made at Rocky Patel’s Tavicusa factory located in Esteli, Nicaragua. It incorporates fillers from Patel’s farms also located in Nicaragua. Given it is a brick and mortar offering, it is also sold by Rocky Patel’s U.S. sales force to those top 200 retailers. 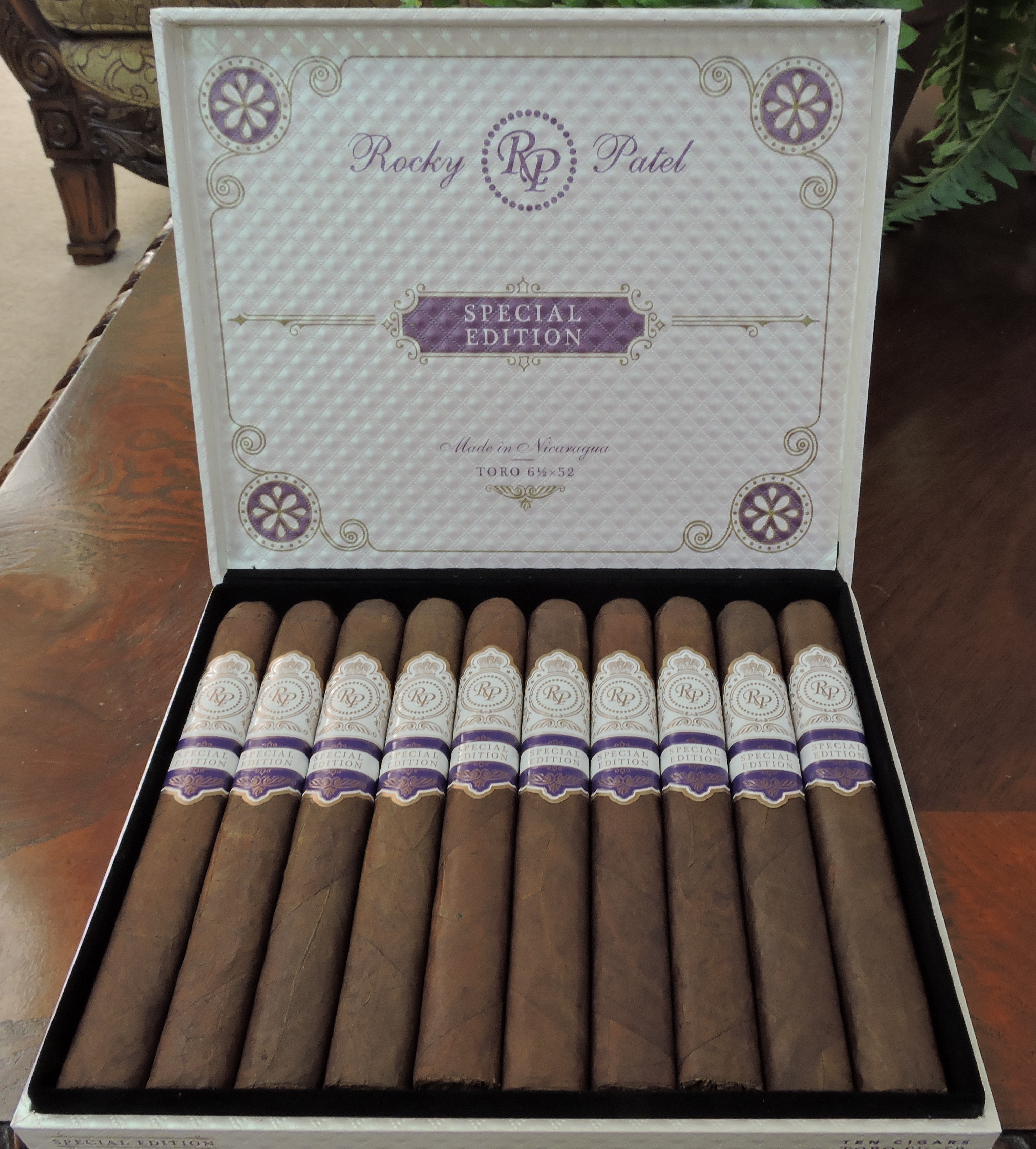 Without further ado, let’s break down the Rocky Patel Special Edition Toro and see what that cigar brings to the table.

The Rocky Patel Special Edition is available in three box-pressed sizes. Each are packaged in ten count boxes.

The Ecuadorian Habano wrapper has a chocolate brown colored look to it. There is a light coating of oil on the surface. This was an elegant and smooth wrapper where the wrapper seams were well hidden and any visible veins were on the thin side. The box-press itself is firm. The press itself leaned toward a square press as the press seemed a little sharper on the bottom of the cigar. 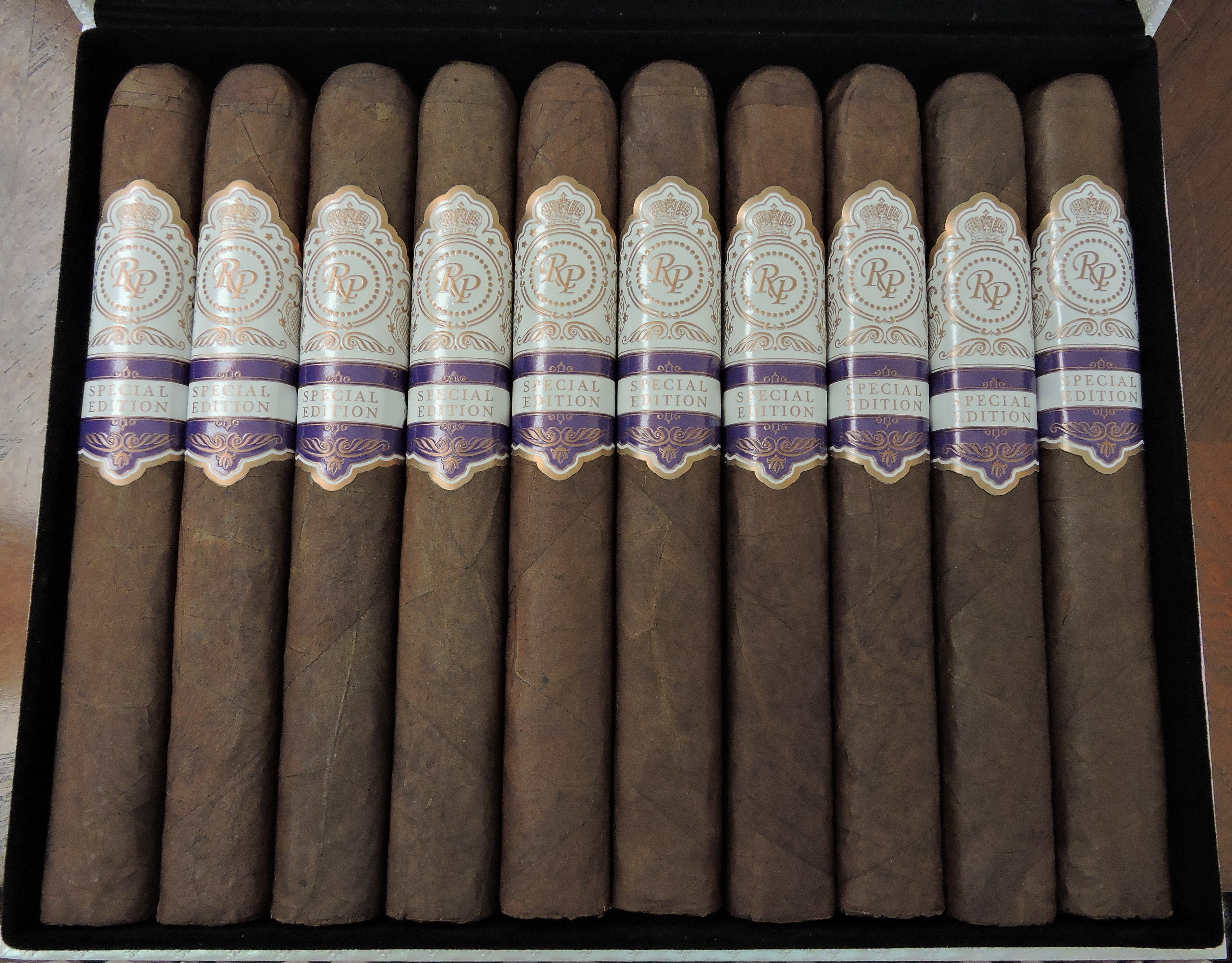 The upper portion of the band has a white background while the lower portion is purple. The upper portion features the Rocky Patel circulos “RP” logo surrounded by gold adornments. On the purple section is a white nameplate design with the text “SPECIAL EDITION” in gold font. Below the nameplate are some additional gold adornments The band itself has gold trim, but the purple section has some additional white trim on the lower portion.

Prior to lighting the Rocky Patel Special Edition Toro, I went with my usual choice of a straight cut to remove the cap. After the cap was clipped, I moved on to the pre-light draw ritual. The dry draw delivered a mix of earth, mushroom, and some blackberry sweetness. Overall I considered this to be a very good pre-light draw. At this point I was ready to light up the Rocky Patel Special Edition Toro and await what the smoking phase would have in store.

The start to the Rocky Patel Special Edition Toro featured notes of earth, cedar, and blackberry sweetness. The earth notes became primary soon additional notes of mushroom and chocolate joined them in the forefront. The cedar and blackberry notes settled in the background. Meanwhile the retro-hale produced a combination of white pepper and cedar. The aroma of this cigar also delivered a nice amount of white pepper and cedar.

At the start of the second third, the cedar notes gradually increased in intensity. By the midway point, these notes joined the earth and mushroom notes in the forefront. Meanwhile chocolate notes that were present earlier had dissipated. I still detected some blackberry sweetness in the background.

The last third of the Rocky Patel Special Edition Toro saw the cedar notes in control. These notes combined with some white pepper that now was in the forefront. There still was a touch of earth and mushroom in the background while the blackberry sweetness had dissipated. This is the way the cigar experience came to a close. The resulting nub was firm to the touch and cool in temperature.

The burn to the Rocky Patel Special Edition Toro did require some touch-ups along the way. I found the burn to be a little on the jagged side, but this was a cigar that still took a straight burn path from start to finish. The resulting ash was light gray. Overall the ash was on the firmer side. Meanwhile the burn rate and burn temperature were both ideal. 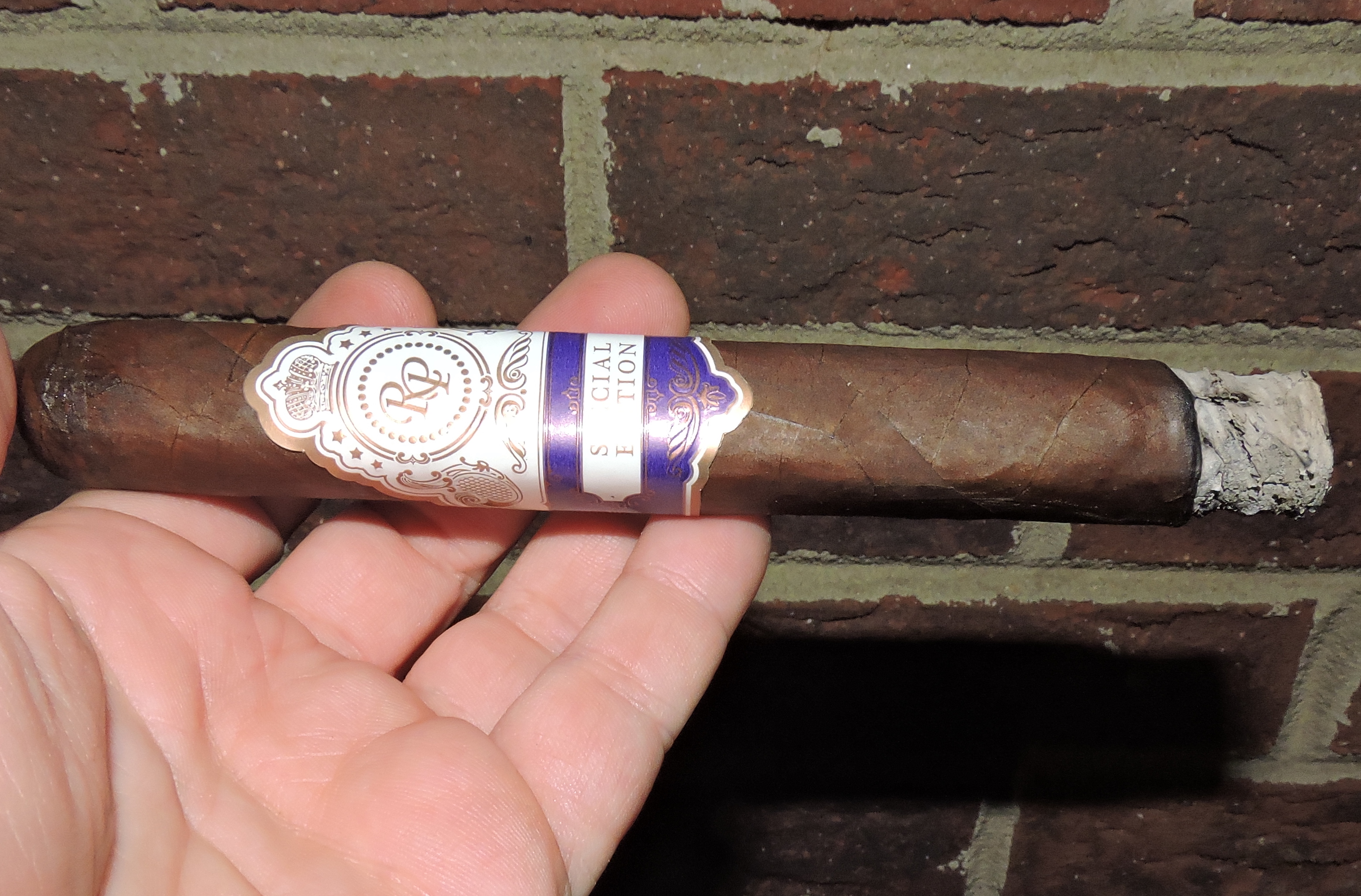 The draw to the Rocky Patel Special Edition Toro was open, but not loose. This was a cigar that also produced ample amounts of smoke throughout the cigar experience.

The strength level of the Rocky Patel Special Edition Toro started in the medium range, but by the second third I found the strength kicked in and had progressed to medium to full. The strength pretty much stayed at medium to full until the end of the cigar experience.

When the Special Edition Toro is retro-haled, it is going to put some weight on the palate. Factoring the retro-hale in, I found this cigar started out medium to full-bodied. Like the strength, by the second this I found the level progress to the next level – in this case full-bodied.

One thing that definitely came to mind after smoking the Rocky Patel Special Editon Toro was unique. This was not a cookie cutter flavor profile. The mushroom notes combined with some blackberry sweetness are not something that I have had on a cigar. At the same time, I found the flavors really clicked and the end result was a well-balanced cigar. There also is a bit of kick with this cigar – in terms of strength and body. As a result, this is a cigar I would probably steer toward a more seasoned cigar enthusiast. This is a cigar I would definitely reach for again – and it’s one worthy of a box purchase.