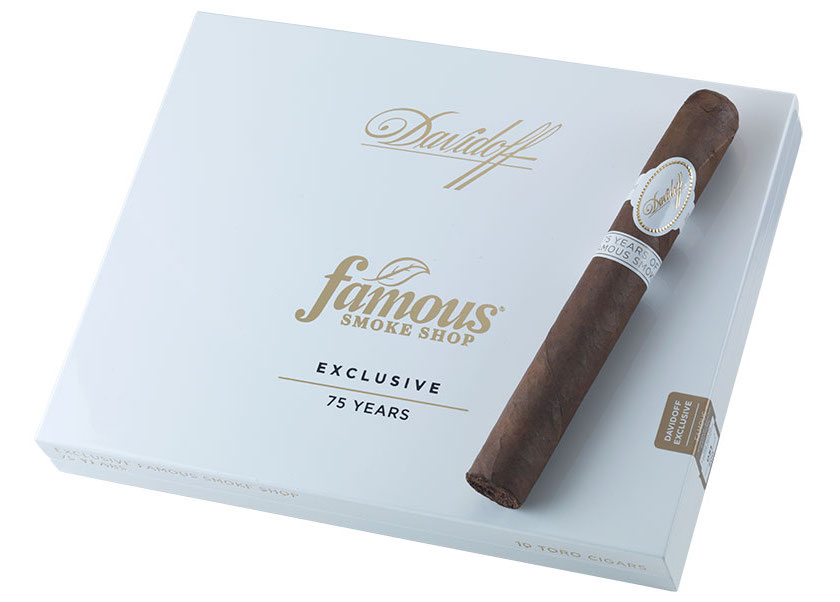 Last week, Davidoff of Geneva announced a group of thirteen appointed merchants and flagship stores would each be receiving an exclusive cigar for its establishment. Today one of the stores, Famous Smoke Shop officially announced its exclusive cigar, the Davidoff Famous 75th Anniversary Cigar. As the name indicates, it commemorates the retailer’s 75 anniversary.

The blend for the Davidoff Famous 75 Anniversary consists 0f an Ecuadorian Habano wrapper over a Mexican San Andres binder and Dominican and Nicaraguan fillers.  The blend components to each of the 2017 Davidoff Exclusive Series cigars are similar, but each of the 13 retailers received a distinct blend.

This is the third brand to make an exclusive cigar for Famous Smoke Shop’s 75th anniversary. Previously Romeo y Julieta and Padron have produced exclusive cigars for the retailer’s milestone.

“Everything about this cigar is special,” said Jim Charnley, Famous Smoke Shop’s Director of Purchasing & Merchandising in a press release. “Davidoff and Famous have always stood for offering cigar smokers the very best in quality and selection, and being a Davidoff Appointed Merchant, we’re proud to have a limited edition Davidoff cigar we can now call our own.

At a glance, here is a look at the Davidoff Famous 75 Anniversary cigar:

The Davidoff Famous 75th Anniversary cigar is available in one size – a 6 x 50 Toro. The cigars are packaged in ten count boxes. A total of 500 boxes were produced.