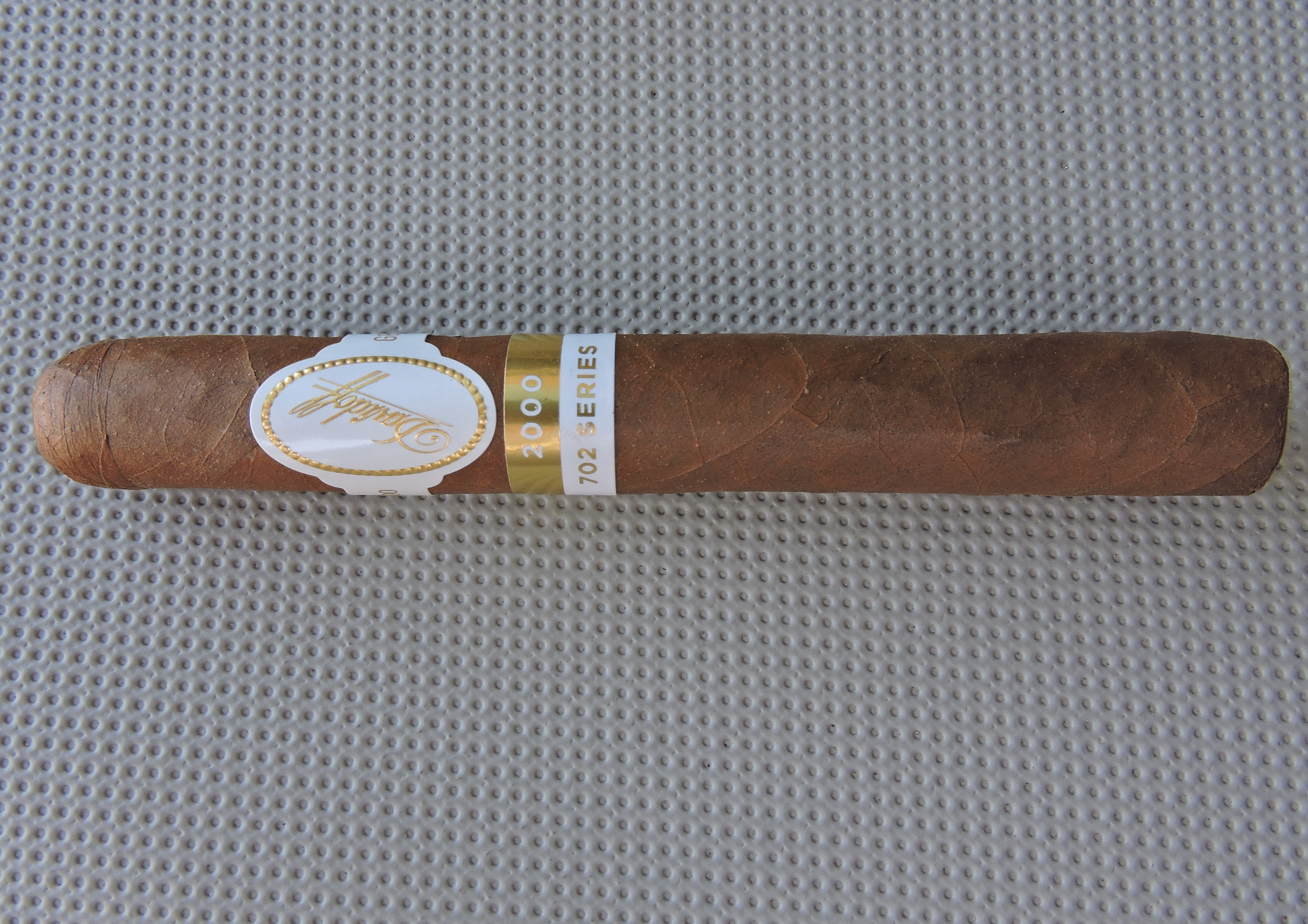 The Davidoff 702 Series 2000 is one of seven cigars that make up the Davidoff 702 Series. The concept behind the 702 Series is that Davidoff has taken seven of its staple blends and replaced the wrapper on each of the blends with its proprietary Ecuadorian 702 hybrid wrapper. The 702 wrapper is the product of a hybrid of three Cuban (Habano) seeds. The tobacco for the 702 wrapper is grown exclusively for Davidoff at the San Juan Finca outside of the province of Cotopaxi in Ecuador. By replacing the wrapper on these seven well-known blends, it creates a whole new cigar. Recently I’ve had an opportunity to smoke the Davidoff 702 Series 2000 – which replaced the Ecuadorian Connecticut seed wrapper with the Ecuadorian 702 wrapper. Overall I found this to create a very different cigar from the original Davidoff 2000, but one that was still quite enjoyable.

In conversations I’ve had with various folks on the Davidoff 702 Series, I’ve encountered one piece of misinformation that seems to be a common thread. In those conversations, many have positioned the 702 Series as a return of the Davidoff Limited Edition 2009 Seleccion 702. This is not the case at all. While these cigars both share the Ecuadorian 702 wrapper, they are totally different blends. I believe the confusion stands from the fact that the Limited Edition 2009 Seleccion 702 and Davidoff 702 Series both are branded with the 702 name.

The Ecuadorian 702 wrapper is not a new thing for Davidoff. In addition to the Davidoff Limited Edition Seleccon 702, here are some of the more prominent Davidoff releases where this wrapper is found:

Without further ado, let’s break down the Davidoff 702 Series 2000 and see what this cigar brings to the table.

The Davidoff 702 Series 2000 utilizes the same binder and filler as the original Davidoff 2000. One notable thing is that the 2000 uses a double binder – something that the Davidoff Seleccion 702 did not have.

One thing to note – each cigar in the Davidoff 702 Series is a unique blend in a different size.For completeness, we list the other six Davidoff Series 702 blends. Details of these blends were covered these in detail back in January.

The Ecuadorian 702 wrapper of the Davidoff 702 Series 2000 has a medium to dark brown color with some colorado red mixed into the color scheme. There is some oil on the surface of this wrapper. There are some thin visible veins. The darker complexion of the wrapper does a nice job at nearly hiding the wrapper seams.

There are two bands on the Davidoff 702 Series 2000. The primary band follows the design of the “Davidoff White Label” band. It features the name “Davidoff” in classic cursive gold-colored font on an oval field of white. There are small gold circles going around the perimeter of the oval. The word “GENEVE” (in gold font) flanks to the right of the oval field. To the left of the oval is the text “2000” (also in gold font).

As I normally do, I commenced the cigar experience of the Davidoff 702 Series 2000 with a straight cut. After successfully clipping the cap, I moved on to the pre-light draw phase. I found there to be a bit of complexity on the cold draw as I detected notes of sweet natural tobacco, cedar sweet-spice along with a touch of floral and coffee notes. Overall I considered this to be an excellent pre-light draw. At this point I was ready to light up the Davidoff 702 Series 2000 and see what the smoking phase would have in store.

The start to the Davidoff 702 Series 2000 begins with a combination of natural tobacco, coffee, and earth. In the background I detected a slight prune and cedar note. During the first third, the prune and cedar notes moved up toward the forefront. I found the prune flavor to deliver a nice dried fruit sweetness early on. Meanwhile the natural tobacco, earth, coffee, and cedar were in the background. Meanwhile the retro-hake delivered a mix of white and black pepper.

Going into the second third the prune sweetness remained in the forefront, but now the earth notes also found their way up front from time to time. Meanwhile there was a slight floral note that also surfaced in the background. During the second half, I found the prune sweetness diminished and the cedar notes began to increase – providing a little more spice into the equation.

Later in the second third, the earth notes displaced the prune notes as the primary note. The prune joined the cedar, natural tobacco, and coffee notes in the background. This flavor profile pretty much continued into the last third until the cigar experience came to a close. The resulting nub was firm to the touch and cool in temperature.

The burn of the Davidoff 702 Series 2000 was flawless. The cigar maintained a straight burn path and a sharp burn line. I found this was a cigar that was low maintenance in terms of touch-ups needed. The resulting ash was tight and firm with a near white color. The burn rate and burn temperature were ideal. This cigar scored well enough to earn the “exceptional” rating for burn. This is the highest assessment rating for a burn. 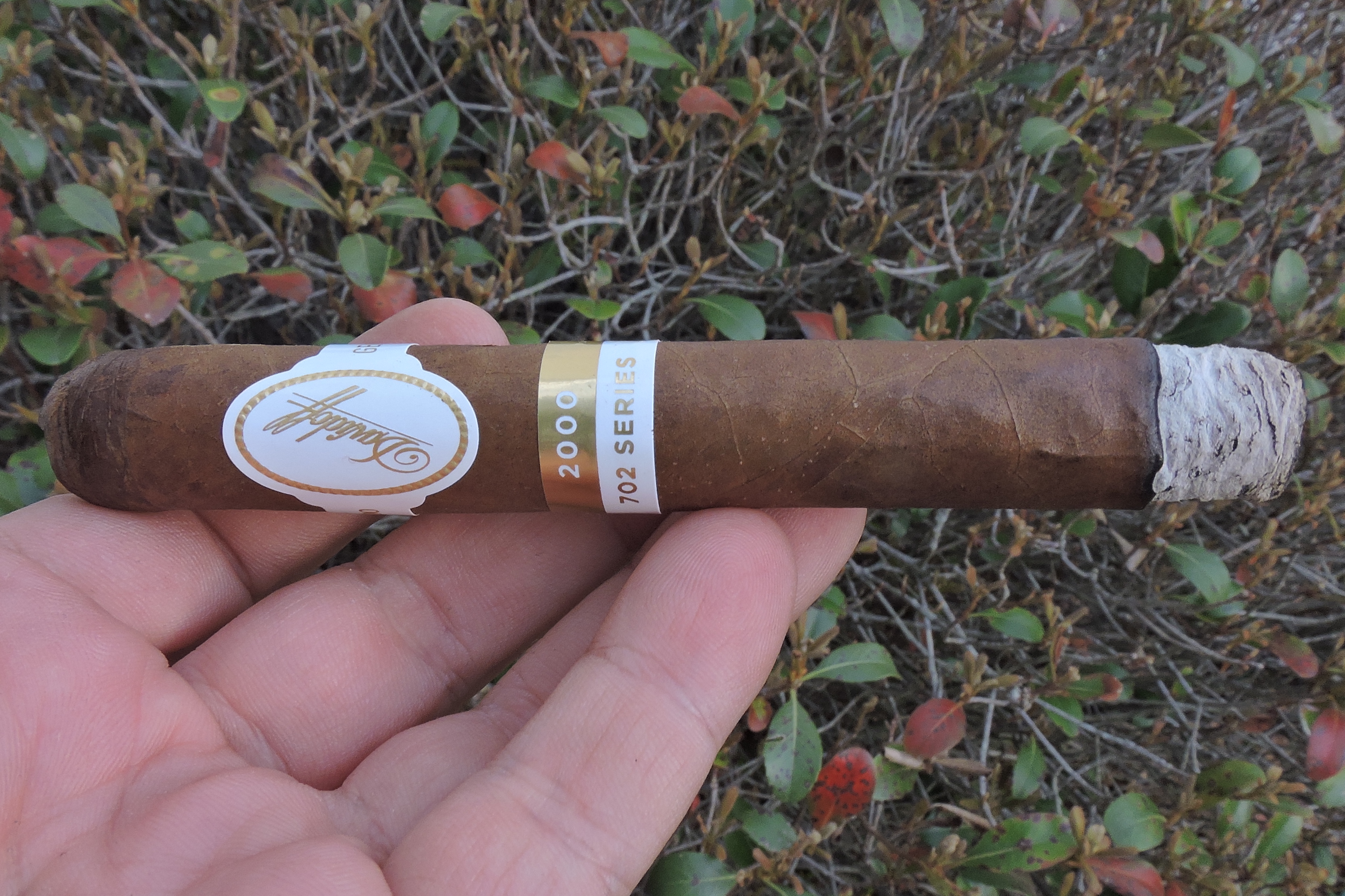 While in the introduction section, you can argue I spent way too much time drawing a distinction that the Davidoff 702 Series is not the Davidoff Limited Edition Seleccion 702, I feel this was important because these are very different cigars. Overall I found the Davidoff 702 Series project to be a case study on how a wrapper can change a cigar. If you have smoked a Davidoff 2000, and now go ahead and smoke the Davidoff Series 702 2000 with the 702 wrapper – you are going to get a very different smoke. My experience with these wrapper substitutions on the 702 is some are going to work better than others.  While this one works on the 2000 blend, I’m not sure the 702 Series 2000 eclipses the original 2000. Still this is a cigar I would recommend to either a novice or experienced cigar enthusiast. As for myself, this is a cigar I would definitely smoke again – and it’s worthy of picking up a fiver.