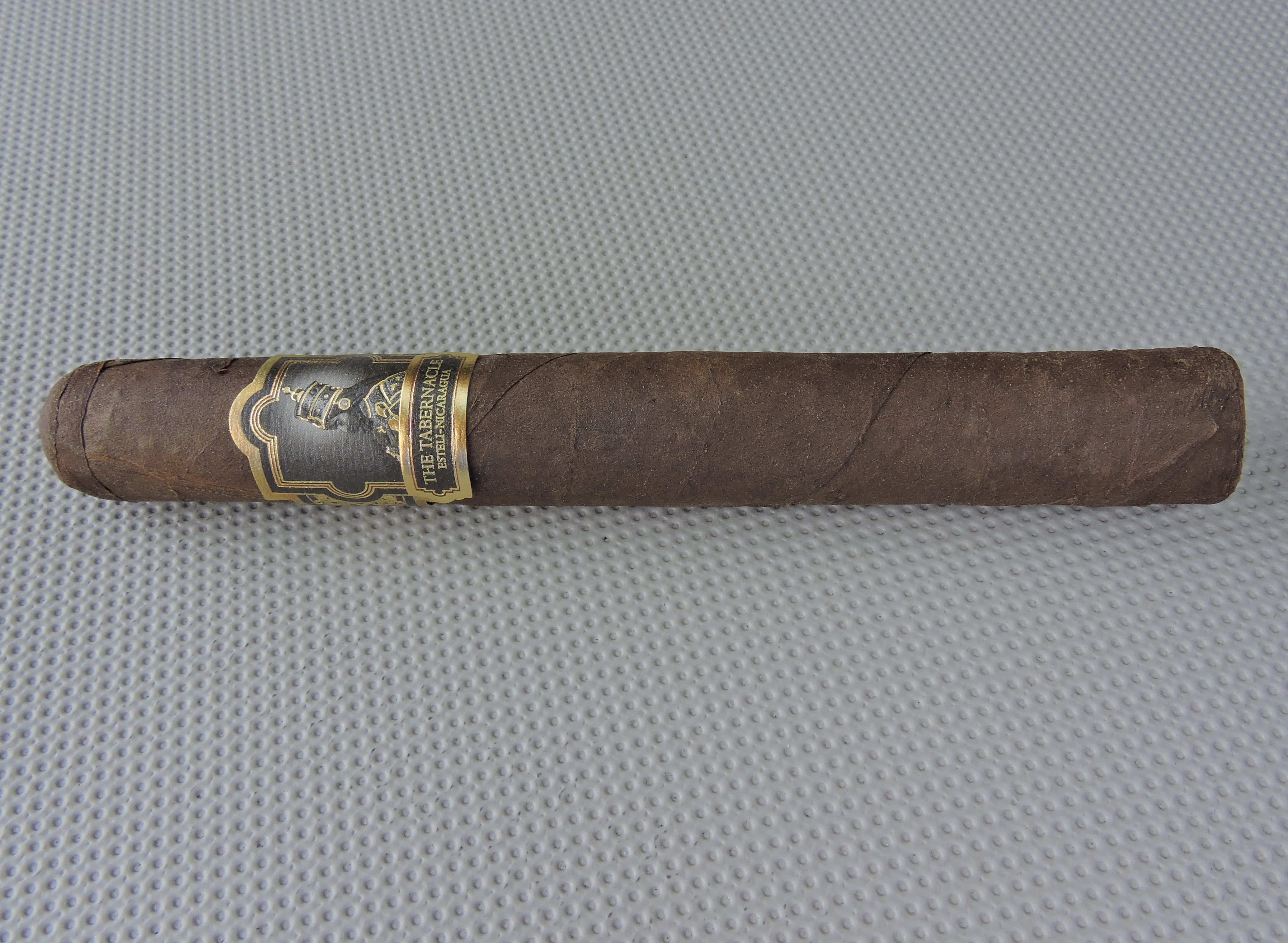 When Nicholas Melillo launched Foundation Cigar Company in 2015, it was no surprise he chose to not to release a Connecticut Broadleaf cigar. While he was at Drew Estate, Melillo carried the unofficial title of “Chief of the Broadleafs”. Broadleaf is a wrapper he was intimately associated with while at Drew Estate working on such cigars as Liga Privada No. 9. Expanding his horizons, Melillo opted to release El Güegüense, a Nicaraguan puro that paid homage to the country he lived in for many years – Nicaragua. However many anticipated that Melillo would eventually release a creation with a Broadleaf wrapper. In 2016, Melillo would bring two Connecticut Broadleaf cigars – the value priced Charter Oak Broadleaf and the more premium offering, The Tabernacle. Today we take a closer look at The Tabernacle in the Toro size. With The Tabernacle, Melillo shows he hasn’t lost his touch with Connecticut Broadleaf as he brings an excellent offering to market.

Without further ado, let’s take a closer look at The Tabernacle and see what this cigar brings to the table.

To produce The Tabernacle, Melillo turned to A.J. Fernandez’s Tabacalera Fernandez factory and leveraged some of Fernandez’s Connecticut Broadleaf supply. The blend itself is a four country multi-national blend that incorporates Nicaragua tobacco grown at Fernandez’s La Soledad farm. This is a farm where Melillo lived when he first moved to Nicaragua in 2003, so he is quite familiar with the tobaccos from this farm.

The Tabernacle is available in six sizes. All sizes will be in 24 count boxes with the exception of the lancero which will be in 12 count boxes.

The Connecticut Broadleaf wrapper of The Tabernacle Toro has a rich mocha color to it. Upon closer examination some darker marbling can be seen. The surface of the wrapper has a light coating of oil on it. There is also somewhat of a silky complexion to this wrapper – something not normally exhibited on a Broadleaf wrapper (which tends to be rugged). There are some thin visible veins and thin visible wrapper seams.

The bands contain an image of Haile Selassie on a gray background. Selassie was the Emperor of Ethiopia from 1930 to 1974 for was said to be a descendant of King Solomon. The tie to Ethiopia is that it is one of the places that claims to house the Ark of the Covenant, the resting place for the Tabernacle. 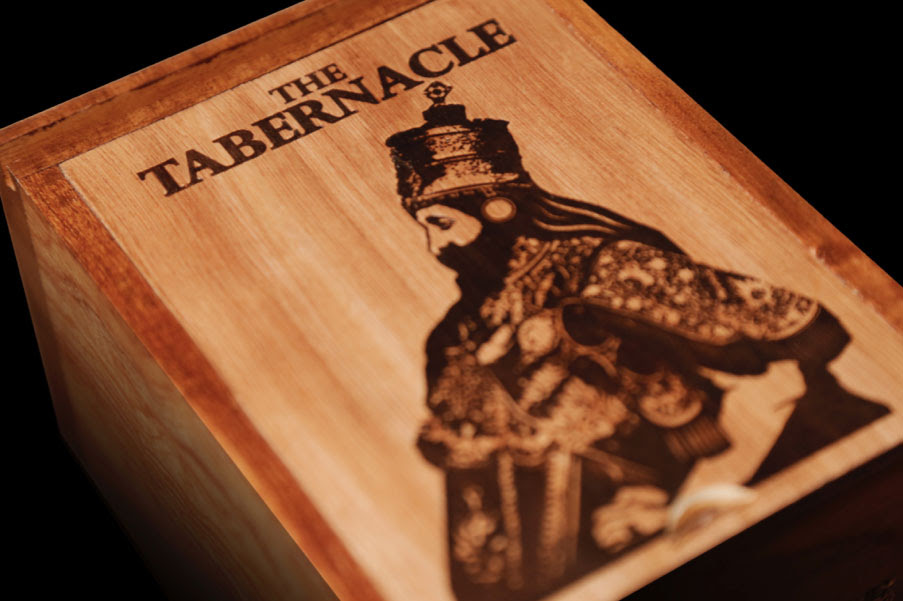 The image is surrounded by a gold frame. Below the image is a charcoal gray background with the text “THE TABERNACLE” in gold font. Just below that text is the text “ESTELI, NICARAGUA” in smaller gold font. The sides of the band have a black, gold, and red design going around the band.

As I normally do, I commenced the cigar experience by placing a straight cut into the cap of the cigar. Once the cap was clipped, it was on to the pre-light draw stage. The cold draw delivered a mix of mocha and a slight pepper note. Mocha is a flavor that I consider to be a cross between coffee and chocolate. In this case, the mocha note was more skewed toward the coffee side. Overall I considered this to be a very good pre-light draw. At this point I was ready to light up The Tabernacle Toro and see what the smoking phase would have in store.

The Tabernacle Toro kicked off with notes of mocha, red pepper, and cedar. Like the pre-light draw, the coffee component over the mocha had a slight edge. At the same time, there was a creamy texture that gave the Tabernacle a level of smoothness. The mocha notes quickly moved into the forefront while the red pepper and cedar moved into the background. On the retro-hale, I picked up a much stronger dose of the red pepper.

During the second third, the mocha notes were now well on their way to transitioning to a full blown black coffee note. The red pepper and cedar were close secondary notes. At the same time, a subtle maduro sweetness also surfaced in the more distant background (a cross between natural tobacco and dried fruit).

The last third of The Tabernacle Toro saw the red pepper and cedar move into the forefront. The coffee notes diminished slightly to a secondary note. Meanwhile there was still a touch of maduro sweetness in the background. This is the way The Tabernacle Toro came to a close. The resulting nub was cool in temperature, but soft to the touch.

Overall, the burn of The Tabernacle Toro scored quite well. The cigar had no problem maintaining a straight path. There was a slight amount of jaggedness on the burn line, but this didn’t warrant the need for frequent, additional touch-ups. The color of the ash had several shades of gray ash was on the firm side. The burn rate and burn temperature of the cigar were ideal. 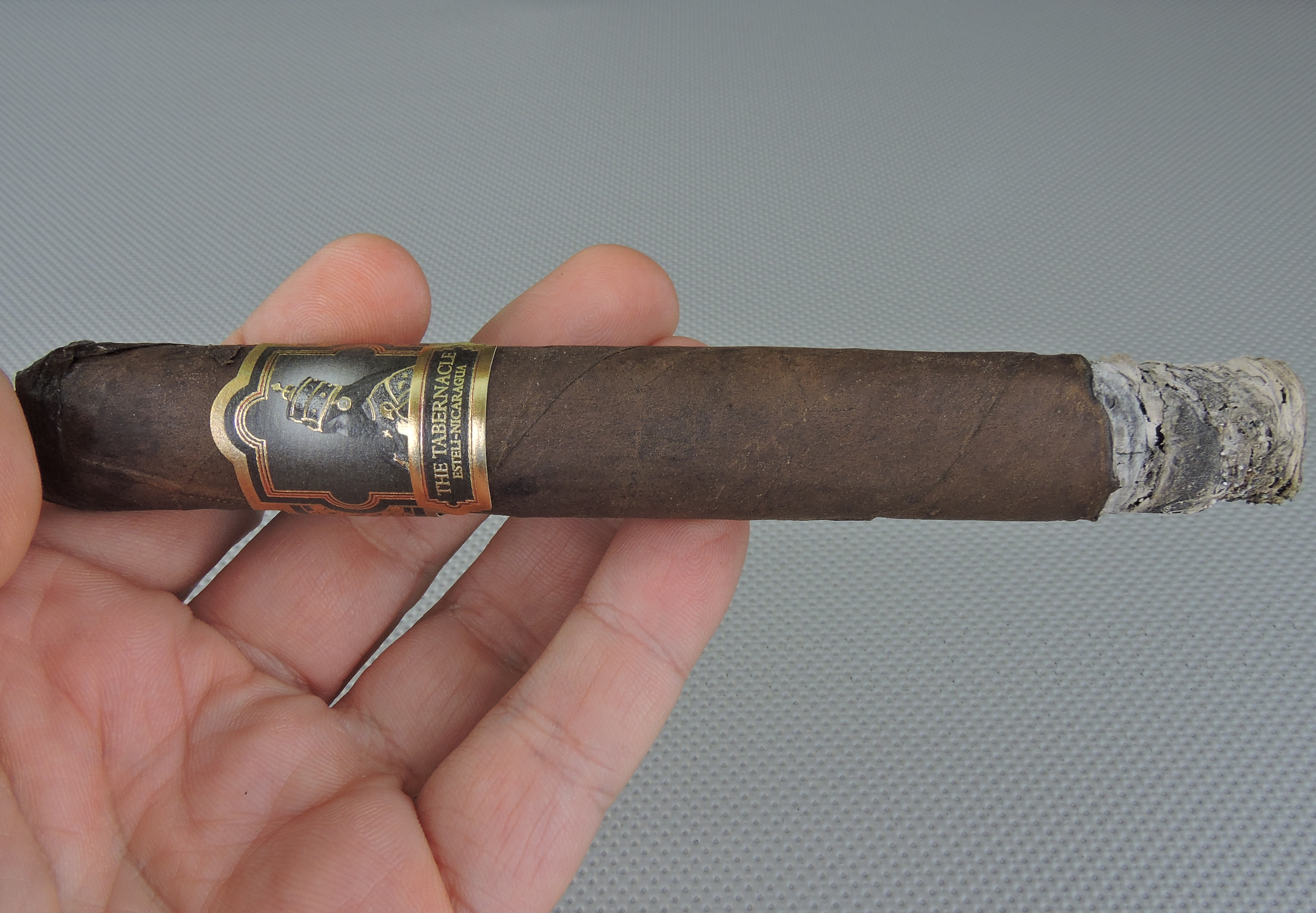 Burn of The Tabernacle Toro

The draw to The Tabernacle Toro was on the open side, but it was not overly loose either. I also found that this cigar produced an abundance of smoke.

With the Tabernacle Toro, Melillo delivers a cigar that is quite bold.

Strenghwise, The Tabernacle Toro started out medium to full right out of the gate. The strength gradually increased and by the second half, The Tabernacle Toro was at full strength. I did find the increase in strength leveled off in the final third, but I was still feeling the punch of this cigar.

At the same time, this is a cigar that was full-bodied right out of the gate – and stayed there for the duration of the smoking experience. Overall when it came to strength versus body, I found the body had the edge early on with both attributes pretty much even in the second half.

The Tabernacle Toro is a very good release by Melillo. What I love about this cigar is that Melillo delivers a Connecticut Broadleaf Maduro with big, bold flavors and plenty of kick. A few years ago, the full strength, full-bodied Broadleaf cigars seemed to be the rage of the market. Over the past couple of years releases like this have seemed to become less frequent, so seeing a release like The Tabernacle was a good thing. Most importantly, The Tabernacle is going to deliver a nice balance of sweetness and spice with a touch of grittiness. Because it is on the fuller side, this is a cigar I would steer toward a more experienced cigar enthusiast. As for myself, this is a cigar I’d smoke again – and it’s worthy of a box purchase.