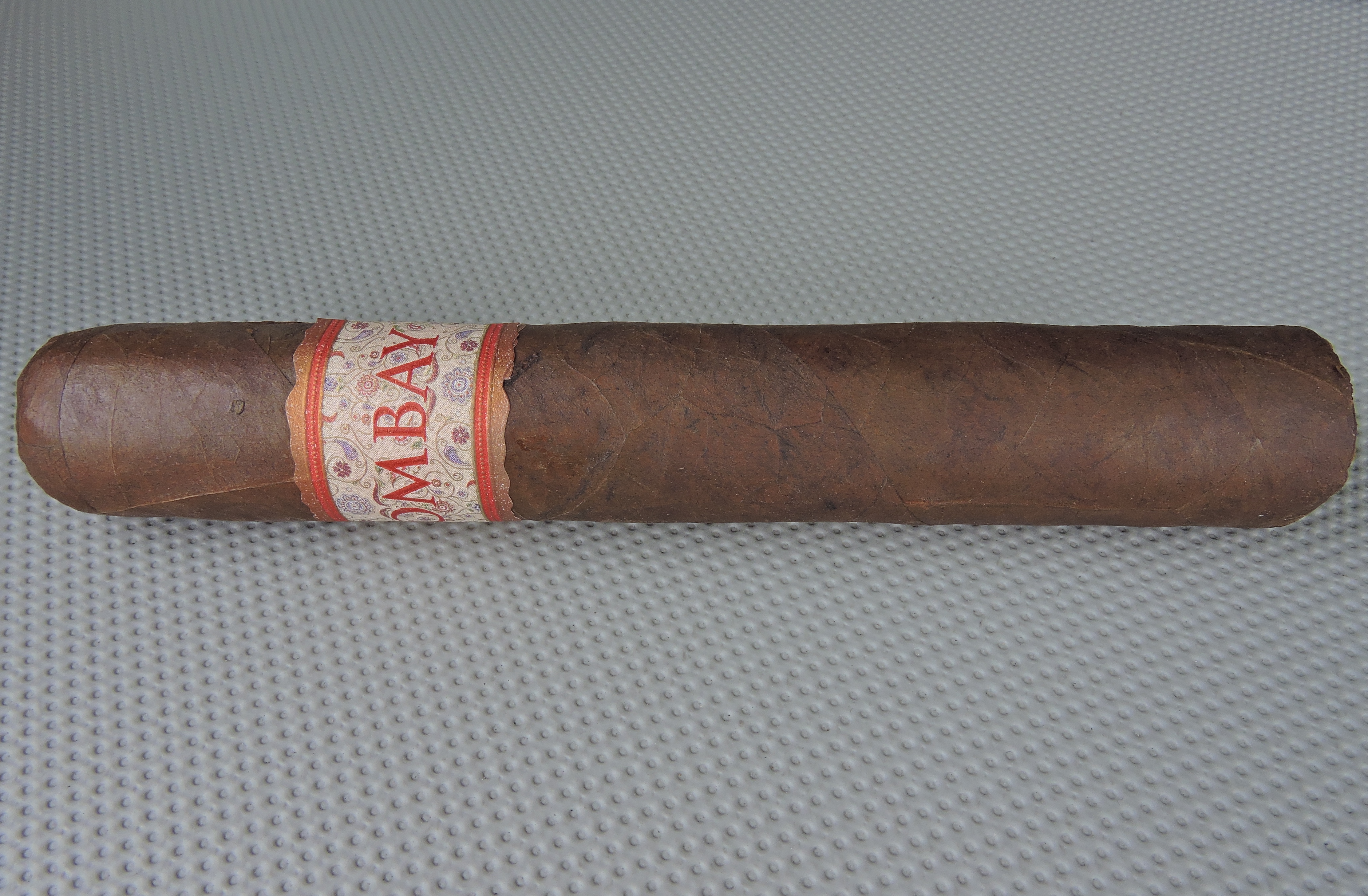 Bombay Tobak is owned by Mel Shah. Shah is a retailer who owns Fame Wine and Cigars in Palm Springs, California. After retiring from the IT industry in 2001, Shah opened his shop and in 2014 proceeded to enter the manufacturing side by launching Bombay Tobak.

Without further ado, let’s break down the MBombay Corojo Oscuro Gordo and see what this cigar brings to the table.

The MBombay Corojo Oscuro is a little different in that this cigar incorporates tobacco from Ecuador in all three components of the blend. Not only does it feature an Ecuadorian wrapper and binder, but there is also Ecuadorian tobacco as a part of the filler.

The MBombay Corojo Oscuro Gordo’s wrapper has the rich mahogany color that is seen across the other vitolas in the line. There is a moderate amount of oil on the surface of this wrapper. This is a cigar that has several visible veins. There are also some visible wrapper seams.

The MBombay Corojo Oscuro Gordo features MBombay’s signature rose, red, and gold Indian-inspired mosaic design. There is red and gold trim across the top and bottom of the band. Prominently displayed on the band is the text “MBOMBAY” in large red font. While some of the sizes of the MBombay Corojo Oscuro feature a larger mosaic band that covers this band, the Gordo only features the smaller band.

Prior to lighting up the MBombay Corojo Oscuro Gordo, I went with a straight cut to remove the cap. After detaching the cap, I commenced with the pre-light draw experience. The dry draw delivered notes of classic wood, cedar, and bing cherry. The cherry note is something that I had picked up on the Double Corona and Perfecto sizes of the Corojo Oscuro, but this one had a little less sweetness than the other sizes. Overall I considered this to be a satisfactory pre-light draw. At this point, I was ready to light up the MBombay Corojo Oscuro Gordo and see what the smoking experience would have in store.

The MBombay Corojo Oscuro Gordo opened with notes of classic wood and bing cherry. This was followed by subtle notes of black pepper and cream that surfaced in the background. During the first third the wood and cherry notes alternated in intensity in the forefront. Meanwhile, the retro-hale produced an extra layer of black pepper as well as some cedar notes.

By the second third, some cedar notes emerged on the tongue and joined the classic wood and cherry notes in the forefront. The black pepper remained present in the background, but gradually started to build up in intensity. Meanwhile, the cream notes had dissipated. As the Corojo Oscuro Gordo reached the midway point, the cherry notes had receded into the background.

The last third saw the Corojo Oscuro Gordo get spicier. The cedar emerged as the primary flavor. The pepper notes were a close secondary note. In the more distant background, there were still notes of cherry and classic wood providing some balance to the spice. This is the way the MBombay Corojo Oscuro came to a close. The resulting nub was firm to the touch and cool in temperature.

From a burn perspective, the burn path of the MBombay Corojo Oscuro Gordo remained straight. I found the burn line had more jaggedness than I prefer. While this was easily remedied with touch-ups, I found this cigar needed more touch-ups than most. The resulting ash had mixed shades of gray. This wasn’t the firmest ash, but it wasn’t an overly loose, flaky one either. Meanwhile, the burn rate and burn temperature were ideal. 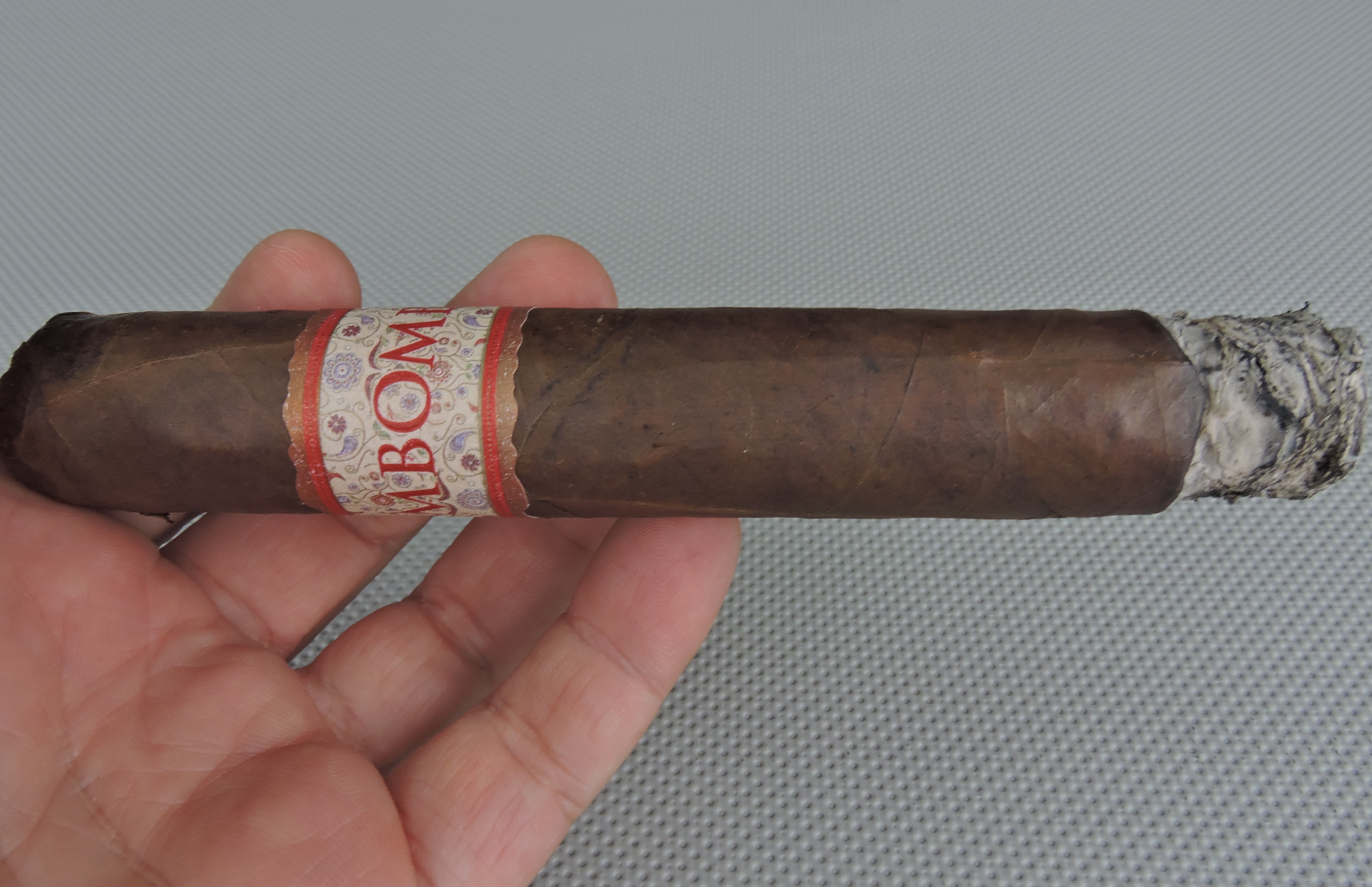 From a strength and body perspective, I found the Gordo size to be more in-line with the Double Corona as opposed to the Perfecto. This is a cigar that delivered a medium strength, medium to full-bodied smoke from start to finish.  With the Perfecto, I had found that to be a bolder and fuller smoke.

In terms of strength versus body, I found the body of the MBombay Corojo Oscuro Gordo to have the edge over the strength.

With a higher ratio of filler in the Gordo compared to the other sizes of the MBombay Corojo Oscuro, it was no surprise there were some differences in the flavor profile. While the cherry, wood, and cedar are a common characteristic of the line, I did find the Gordo didn’t quite have as much sweetness and smoothness. That’s not necessarily a negative as this cigar still delivers a nice 6 x 60 smoking experience.

This is a cigar I would recommend to an experienced cigar enthusiast, but it’s also a nice cigar for a novice looking to graduate to something fuller. While I’m not sure it will win over cigar enthusiasts who don’t like a 6 x 60, this cigar should appeal to the many fans who enjoy a good 6 x 60 – including myself. This cigar is worthy of a box split.

* Bombay Tobak, makers of the MBombay brand is a sponsor of Cigar Coop