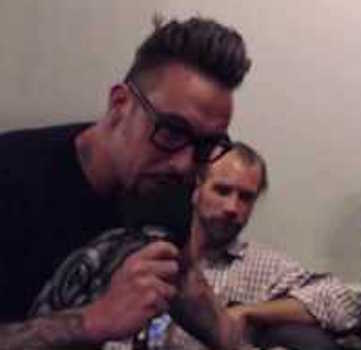 Yesterday, news of a Booth/Caldwell collaboration surfaced as several retailers reported getting shipments of such a cigar.

There are two projects in place. The first is called Hit & Run. Cigar Aficionado reported the duo worked with Tabacalera William Ventura to produce the line. The blend consists of an Ecuadorian Habano wrapper, Indonesian binder, and Dominican filler. The cigar is being offered in five sizes, each packaged in ten-count boxes: 6 x 46, 6 x 54, 4 3/4 x 52,  6 x 50 (piramide), and 5 1/8 x 60.

The two cigars are not being branded as Room 101 releases and Booth was vague about the future of cigars under that brand.

Early this year, Booth’s Room 101 brand and Davidoff ended its production and distribution agreements. Booth was noncommittal when we discussed plans for a return to the industry in May on the Prime Time Show.

Both Caldwell and Booth had been friends for quite a while. This was evident when this author interviewed them in a (somewhat bizarre) segment in 2015.

As for the cigars, they are expected to be showcased at the 2017 IPCPR Trade Show. Hit & Run was the cigar that was sent to select retailers. The Truth is expected to ship in September.