Southern Draw Cigars’ Jacobs Ladder, a double ligero blend that was previously announced last August, is getting a national launch. The cigar will be showcased at the 2017 IPCPR Trade Show in Las Vegas opening on July 11th, 2017. 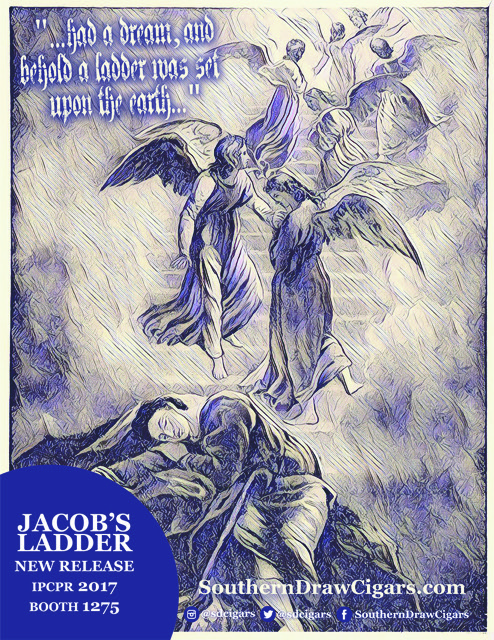 The cigar features a U.S. Pennsylvania Broadleaf wrapper from the Lancaster region, an Ecuadorian Maduro wrapper, as well as an all-Nicaraguan filler. The cigar will initially be offered in three sizes: Robusto, Toro, and Gordo. Production is being handled at Tabacalera Fernandez in Estelí, Nicaragua. Robert Holt, Chief Evangelist for Southern Draw Cigars says the first production run will be sold on a first come, first served basis at the 2017 IPCPR Trade Show.  A second production is scheduled for release in September 2017.

Similar to the Rose of Sharon, the Toro size of Jacobs Ladder will be offered in a limited amount of two-cigar pecatas. A total of 1,000 pecatas have been produced.

In terms of background on the name, the company provided some additional context:

At a glance, here is a look at Southern Draw’s Jacobs Ladder:

At this time, the following three sizes being made available for Southern Draw Cigars’ Jacobs Ladder – each in 20-count boxes. In addition, the 2-count pecata case will be available for the Toro.

The cigars are available in 20-count boxes. There was an additional allocation of the Toro size made available in two-count lavender wooden handcrafted pecatas (cigar cases).