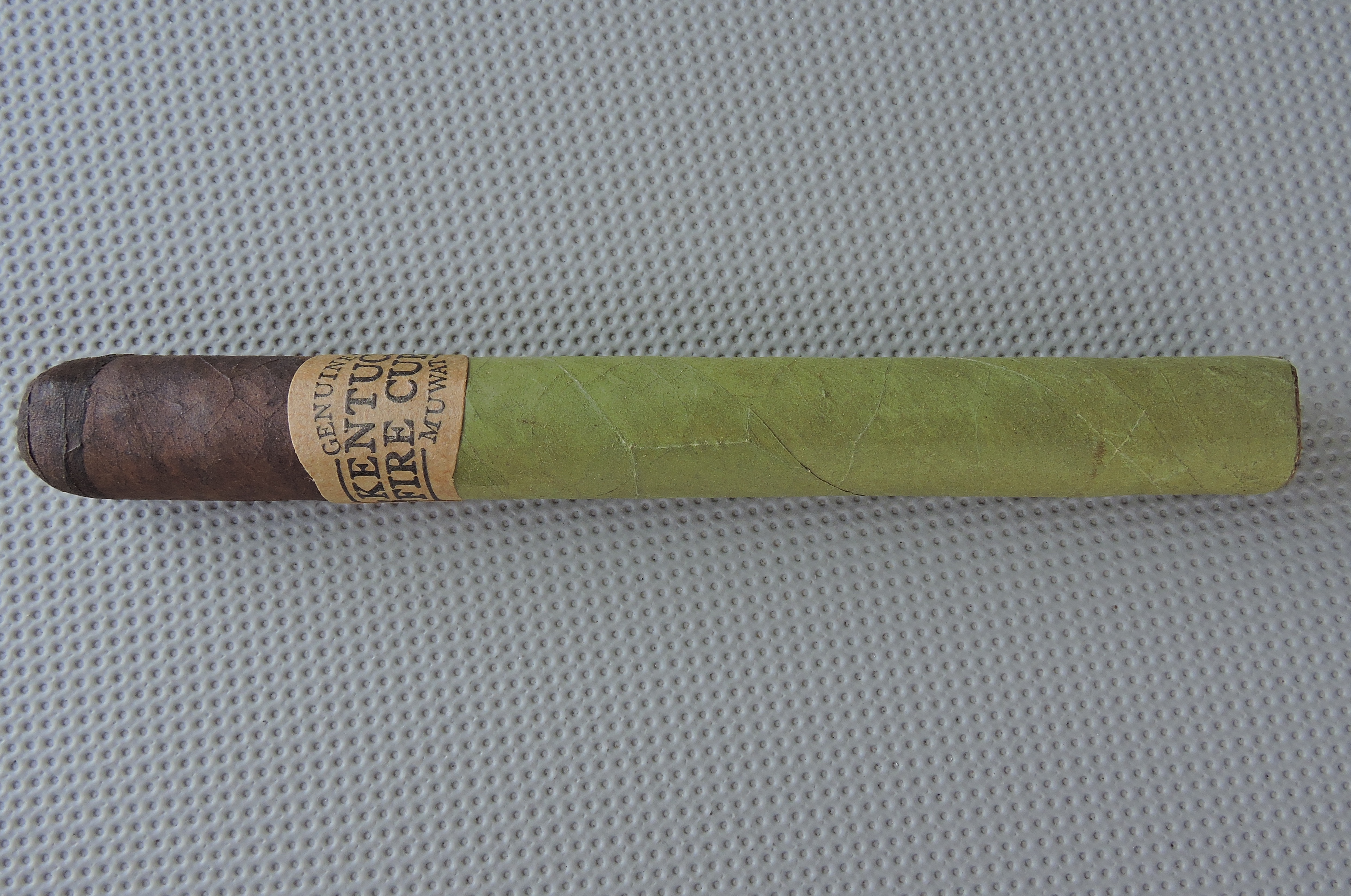 The MUWAT Kentucky Fire Cured Swamp Rat by Drew Estate is one of three cigars that combine two unlikely tobaccos together – namely candela and fire cured. Back in 2013, fire cured tobacco became a trend in the cigar industry. At that time, Drew Estate didn’t just make a cigar with fire cured tobacco, they introduced an entire brand built around it called Kentucky Fire Cured. The brand was made as an offshoot of Drew Estate’s MUWAT brand. In 2015, co-founder Jonathan Drew first indicated there was a project he was working on involving candela and fire cured tobacco. Last year, that project, the MUWAT Swamp Thang/Swamp Rat would officially be the result of this effort. This was followed by a nationwide release earlier this year. Today, we take a closer look at the MUWAT Kentucky Fire Cured Swamp Rat. Overall I found this odd combination of tobaccos to work – creating a very different, but enjoyable cigar.

Most cigars utilize air curing for tobacco where the tobacco is hung in a barn for several weeks to remove moisture from the leaf. With fire cured tobacco, hardwoods are kept on continuous, low smoldering flames to remove the moisture. Typically this process is used for pipe and chewing tobacco. Fire cured releases have a tendency to produce a smokey, campfire-like flavor in the final product.

Candela wrappers, sometimes called Double Claro, are known for their green color. During the curing process, the tobacco is heat-cured to stabilize the chlorophyll levels, thus leading to the green color. Candela wrappers once dominated the U.S. cigar market, but eventually fell out of favor. Candela was, in fact,  sometimes referred to as American Market Selection. The MUWAT Kentucky Fire Cured Swamp Rat/Swamp Thang project is Drew Estate’s first major foray into Candela on the premium cigar end.

Without further ado, let’s break down the MUWAT Kentucky Fire Cured Swamp Rat and see what this cigar brings to the table.

Information hasn’t been made public about the blend. The wrapper is a segmented one. The upper segment of the wrapper (about 25%) above the band is a wrapper that has been fire cured. Below the band is a non-fire cured candela wrapper. The remainder of the blend components is not disclosed.

This is an extension of the MUWAT Kentucky Fire Cured brand. Two of the vitolas are called “Swamp Thang” (i.e. Robusto and Toro) while the Corona Gorda is known as Swamp Rat.

Each of the three sizes is sold in ten-count soft bundles. For retailers, there are refillable trays available. 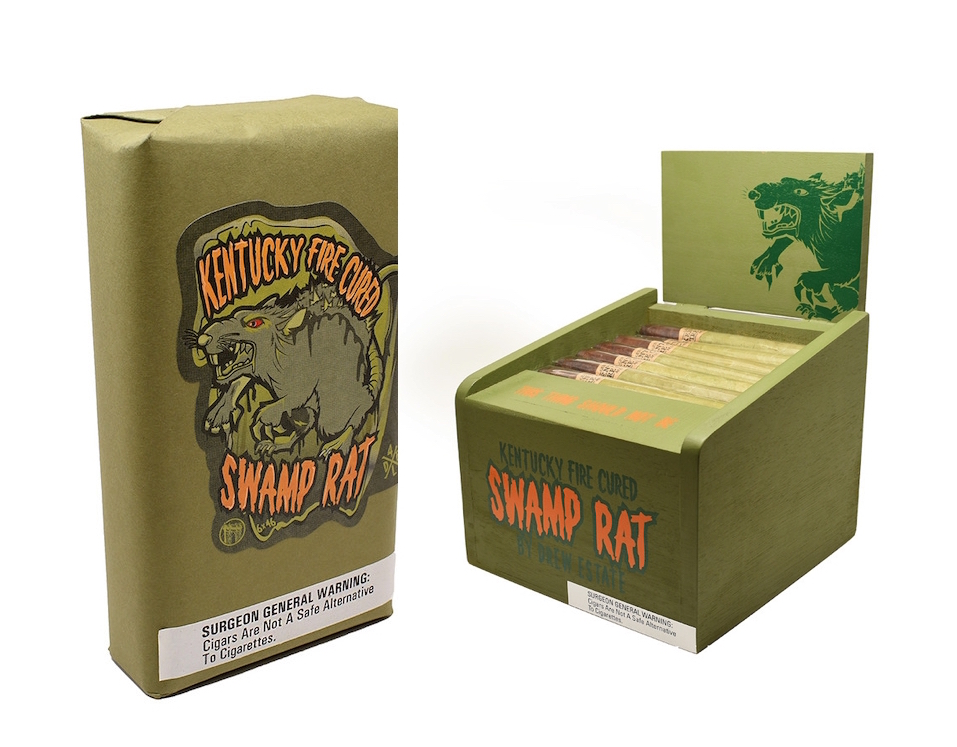 As mentioned, there are two wrappers put on the cigar in segments. The candela wrapper had a green that was almost that “Kermit the Frog” green I like on a candela. The fire cured wrapper has a roasted coffee bean color with some darker mottling on the surface. Overall, both wrappers have some visible veins and some visible wrapper seams. There is a light oil sheen on both wrappers.

The band divides the candela and fire cured wrapper segments. It is the same band found on the base MUWAT Kentucky Fire Cured line. It has a light brown, near kraft paper look to it with black font. The text “KENTUCKY FIRE CURED” is prominent on the center of the band. Above that text is the text “GENUINE” arranged in a curved fashion in a smaller font. The lower part of the band has the text “MUWAT” – also arranged in a curved fashion. The far right of the band has the text “SUBCULTURE STUDIOS”. There are some simple black adornments also on the band.

One thing I did out of the gate is to check out the aroma from the footer of the MUWAT Kentucky Fire Cured. No doubt I got that campfire aroma that I find just about every cigar with fire cured tobacco uses. Since the blend has not been disclosed, I couldn’t say for sure if it is coming from the filler or the fire cured tobacco used on the wrapper all the way on the other end of the cigar.

It was then on to the clipping the cap with a straight cut and moving on to the pre-light experience. I definitely was getting more of the fire cured wrapper than the candela as I got notes of coffee and smoky campfire. While there wasn’t a lot in the way of sweetness, I still found this to be a satisfactory pre-light draw. At this point, I was ready to light up the MUWAT Kentucky Fire Cured Swamp Rat and see what the cigar would bring to the table.

No surprise as the MUWAT Kentucky Fire Cured Swamp Rat started out with a mix of grass, campfire, and white pepper notes. The grass and campfire notes moved to the forefront early on with the white pepper receding into the background. The campfire notes were prominent on the retro-hale.

By the midway point of the Swamp Rat, it seemed like the grassy notes had the edge over the fire cured notes. There also was an increase in the pepper notes. As the cigar approached the point of the wrapper change, the flavor profile underwent a more significant change. It was then when the cigar moved into a full-blown fire cured smoke with a roasted coffee note. The pepper notes were a close secondary note, and the grassy notes dissipated. This is the way the cigar experience of the Swamp Rat came to a close. The resulting nub was firm to the touch and cool in temperature.

Given the odd combination of wrappers and tobacco overall, I was a little concerned about how the combustion would be with the Swamp Rat – however, I had no problems whatsoever. This cigar maintained a straight burn path and a relatively straight burn line. Even the transition between the two wrapper segments was clean. The resulting ash wasn’t overly firm, but it wasn’t loose or flaky either. This ash had various shades of silver-gray mixed in. Meanwhile the burn rate and burn temperature were both ideal. 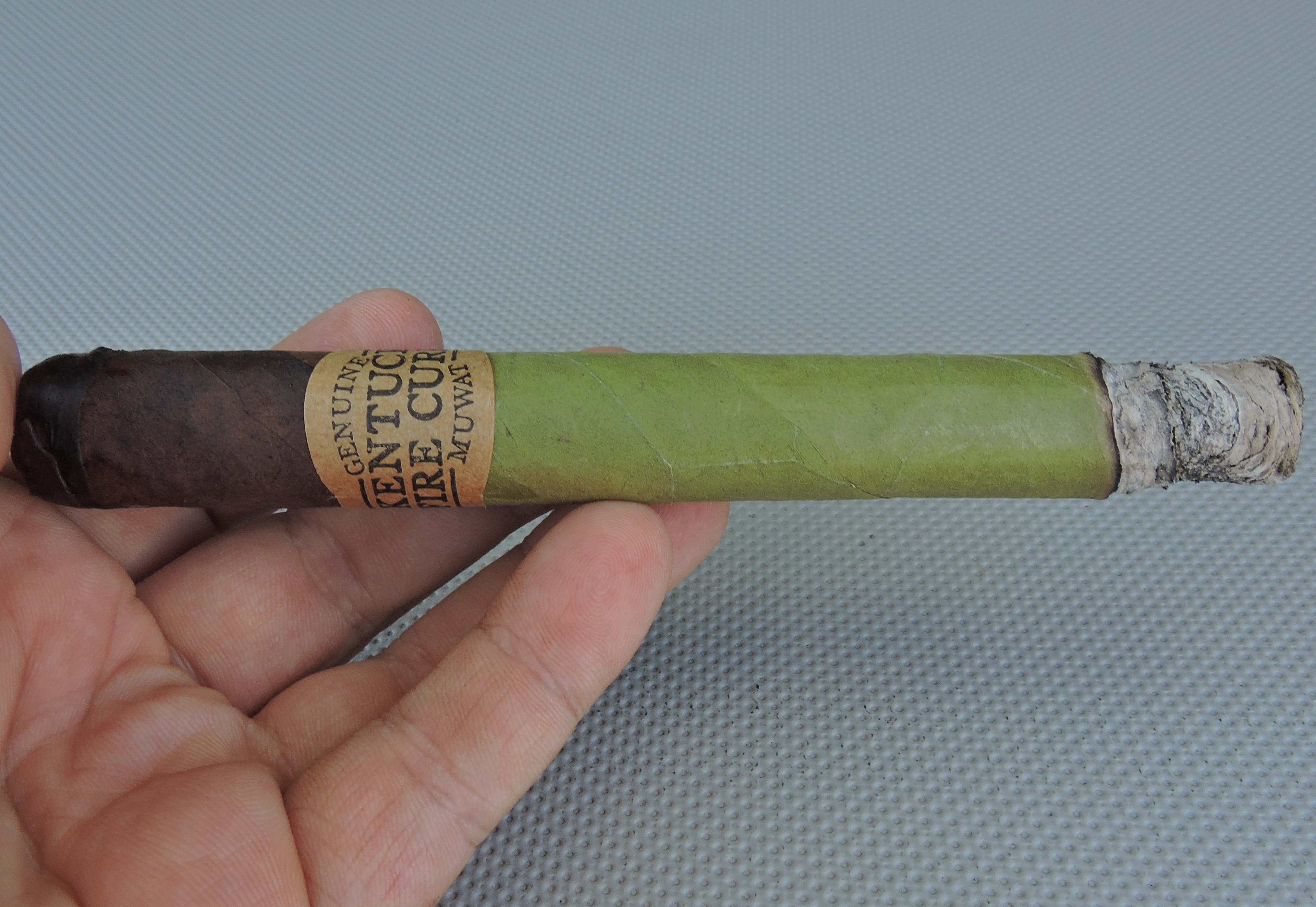 The draw to the Swamp Rat performed very well. I found this cigar to have a nice balance of resistance and openness – making this a low maintenance cigar to derive flavor from.

In terms of strength versus body, both attributes balance each other nicely with neither one overshadowing the other.

The MUWAT Kentucky Fire Cured Swamp Rat delivered what I expect – a mix of candela grassiness and fire cured campfire and barbecue notes. One thing that I liked is how the candela notes offset some of the pungency that I typically get from the campfire notes – and it actually gave this cigar a little more in the way of complexity than I normally get on a fire cured cigar. What I didn’t get on this cigar was a radical new flavor fusion, just two flavors from different ends of the spectrum that seemed to work well together.

While I’d probably steer this to a more seasoned cigar enthusiast, it’s actually a good cigar for a novice to get an introduction to fire cured tobacco. As for myself, this is a cigar I’d smoke again. It’s a cigar worthy of having a fiver in the humidor.