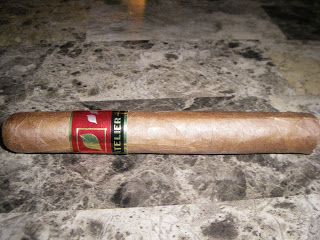 For the fifth year in a row, L’Atelier Imports is releasing its Extension de la Racine line. This year’s edition known as ER17 is a throwback: as L’Atelier is bringing back the same 5 7/8 x 52 Toro size. While we did not see it on display, this was a cigar that in the past was made available to only those retailers that attended the IPCPR Trade Show.

The name L’Atelier Extension de la Racine is French for “extension of the root”.  It is meant to be an offshoot of the original core L’Atelier line.

Here are the specifics of the L’Atelier Extension de la Racine ER17:

Consistent with the other releases branded as “L’Atelier”, the blend incorporates Sancti Spiritus tobacco – in this case, it is used in the binder.

The ER17 is available in 20-count boxes: