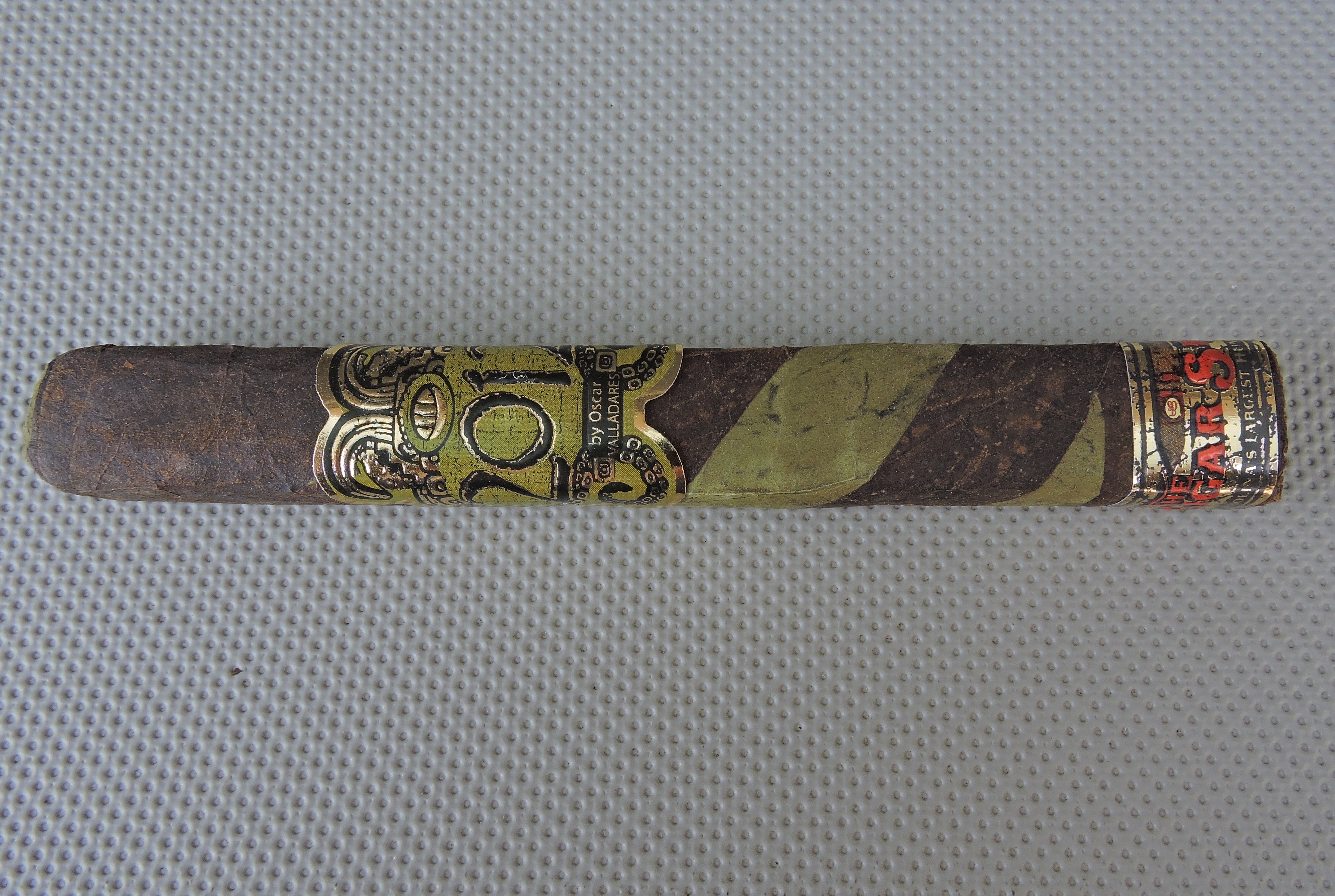 2012 by Oscar Barber Pole by Oscar Valladares Tobacco and Company 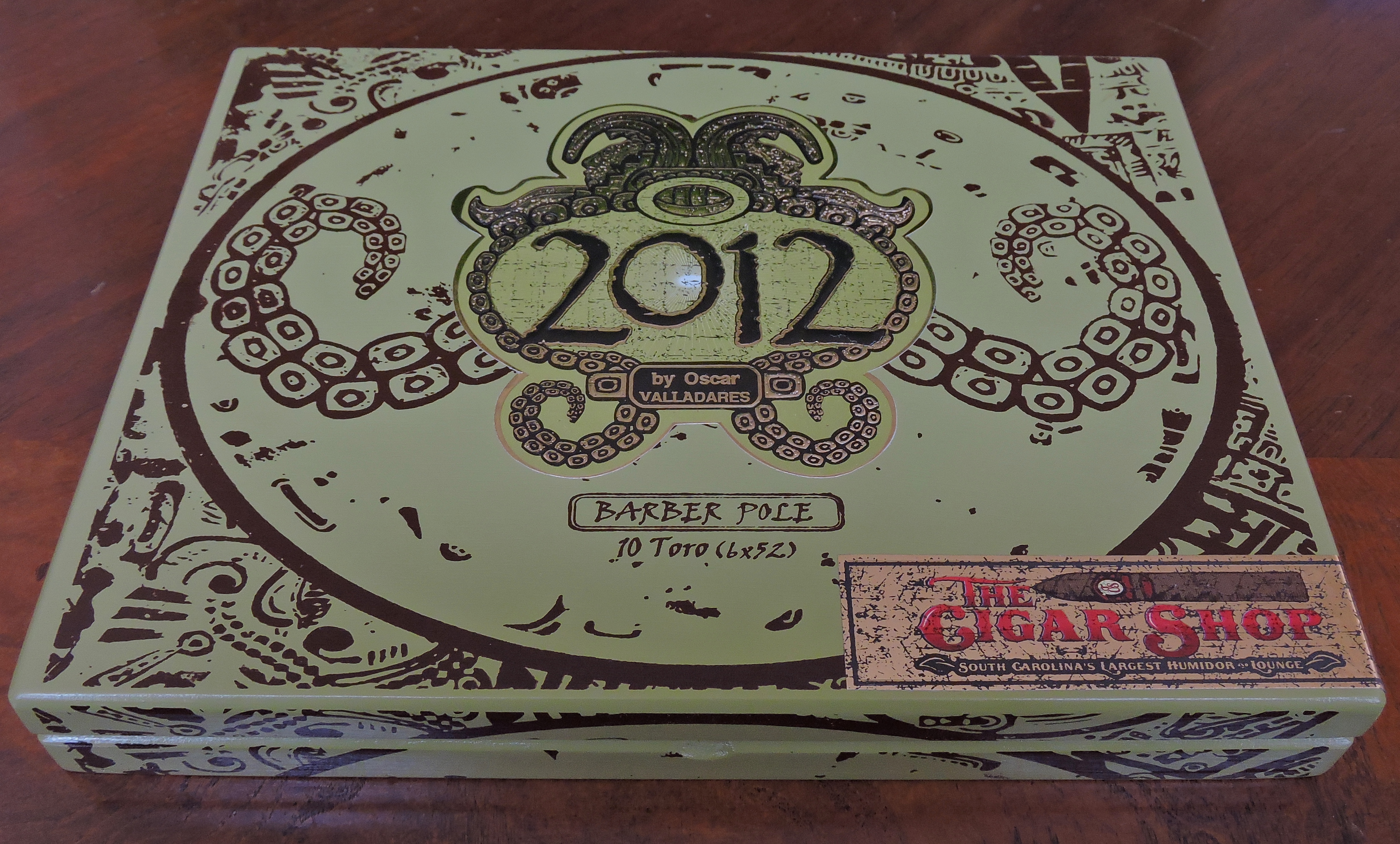 Closed Box of the 2012 by Oscar Barber Pole

The 2012 by Oscar Barber Pole is the second shop exclusive for The Cigar Shop. In 2017, the retailer became the exclusive home to the Quesada Oktoberfest Bayern, a triangular size of the Oktoberfest 2017 blend. Later in 2017, the retailer began discussions of working with Oscar Valladares & Company on an exclusive release. At the time, co-owner Nathan Sumner was envisioning a barber pole combining two of the wrappers (Connecticut, Corojo, and Maduro) from the existing 2012 by Oscar line. It turned out that brand owner Oscar Valladares was already thinking about this cigar and had been working a maduro/candela barber pole version. After sampling the cigar, The Cigar Shop knew they were taking on a unique project and opted to make it the store’s second shop exclusive. 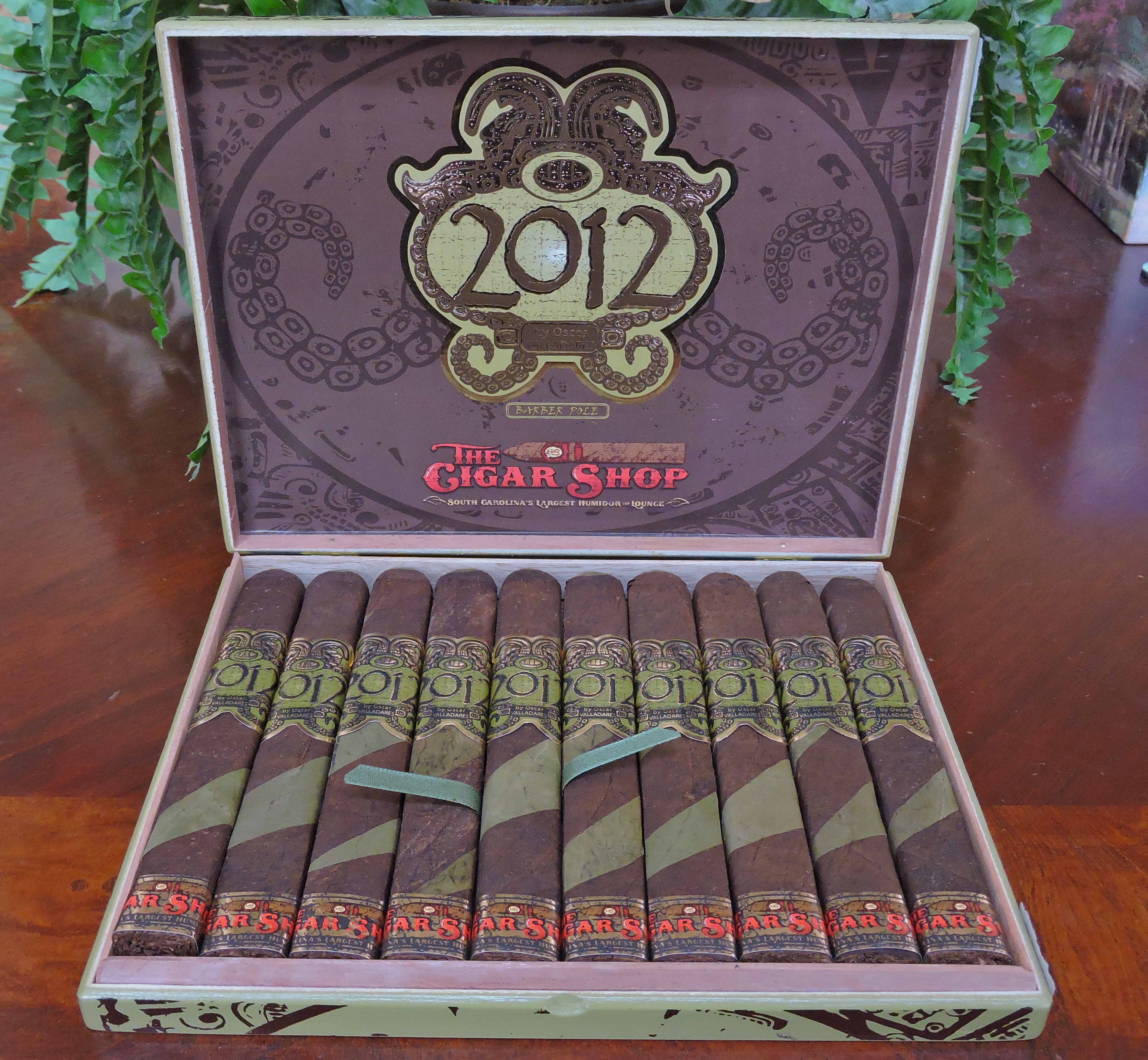 Open box of the 2012 by Oscar Barber Pole

Without further ado, let’s break down the 2012 by Oscar Barber-Pole and see what this cigar brings to the table.

The Maduro wrapper is a Mexican San Andres. In addition, the cigar features Nicaraguan and Honduran tobaccos in the remainder of the blend. The cigar is produced at Oscar Valladares’ factory in Honduras.

The 2012 by Oscar Barber Pole is available in one size – a 6 x 52 box-pressed Toro. The cigars are packaged in ten-count boxes. The Cigar Shop has received an allocation of 200 boxes.

The barber pole wrapper consists of a chocolate brown maduro wrapper and a candela wrapper that is slightly weathered with an olive green color. The wrapper seams are clean between the two wrappers. This was a wrapper that didn’t have much oil on the surface. It also was smooth and any visible veins were on the thin side. The box-press had a sharp, flat press.

This is also a unique barber pole not just from the wrappers that have been paired together. While most barber poles are twisted in a symmetrical manner, providing equal spacing around the cigar, the 2012 by Oscar Barber Pole twists the wrappers in an asymmetrical manner providing a variance in spacing around the cigar. This gives each cigar of the 2012 by Oscar a unique look. The one common denominator is most of the upper third of the wrapper near the cap is maduro. 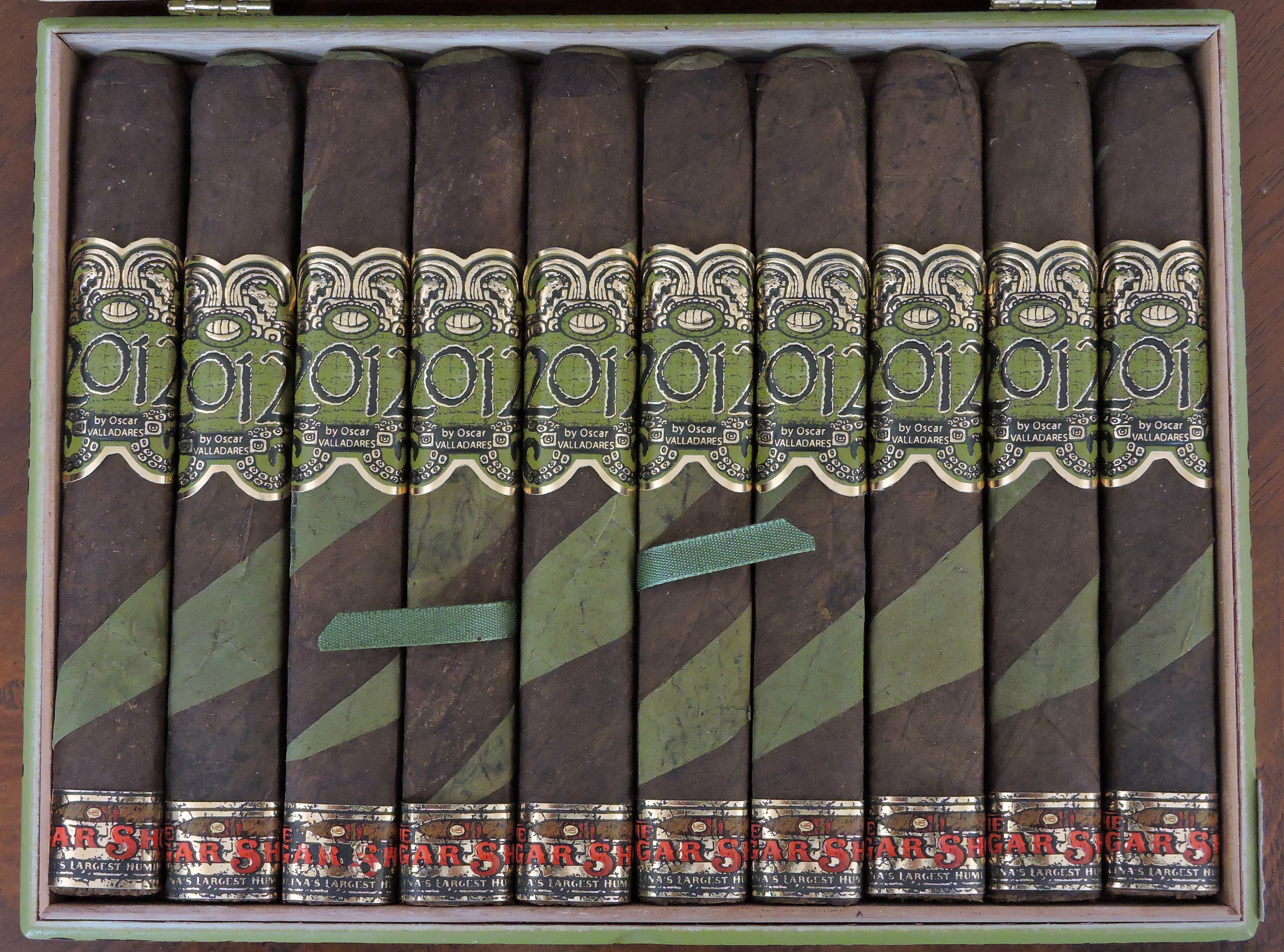 Close Up of the 2012 by Oscar Barber Pole

The cap is also unique in that it also features a maduro cap surrounded by a candela ring. 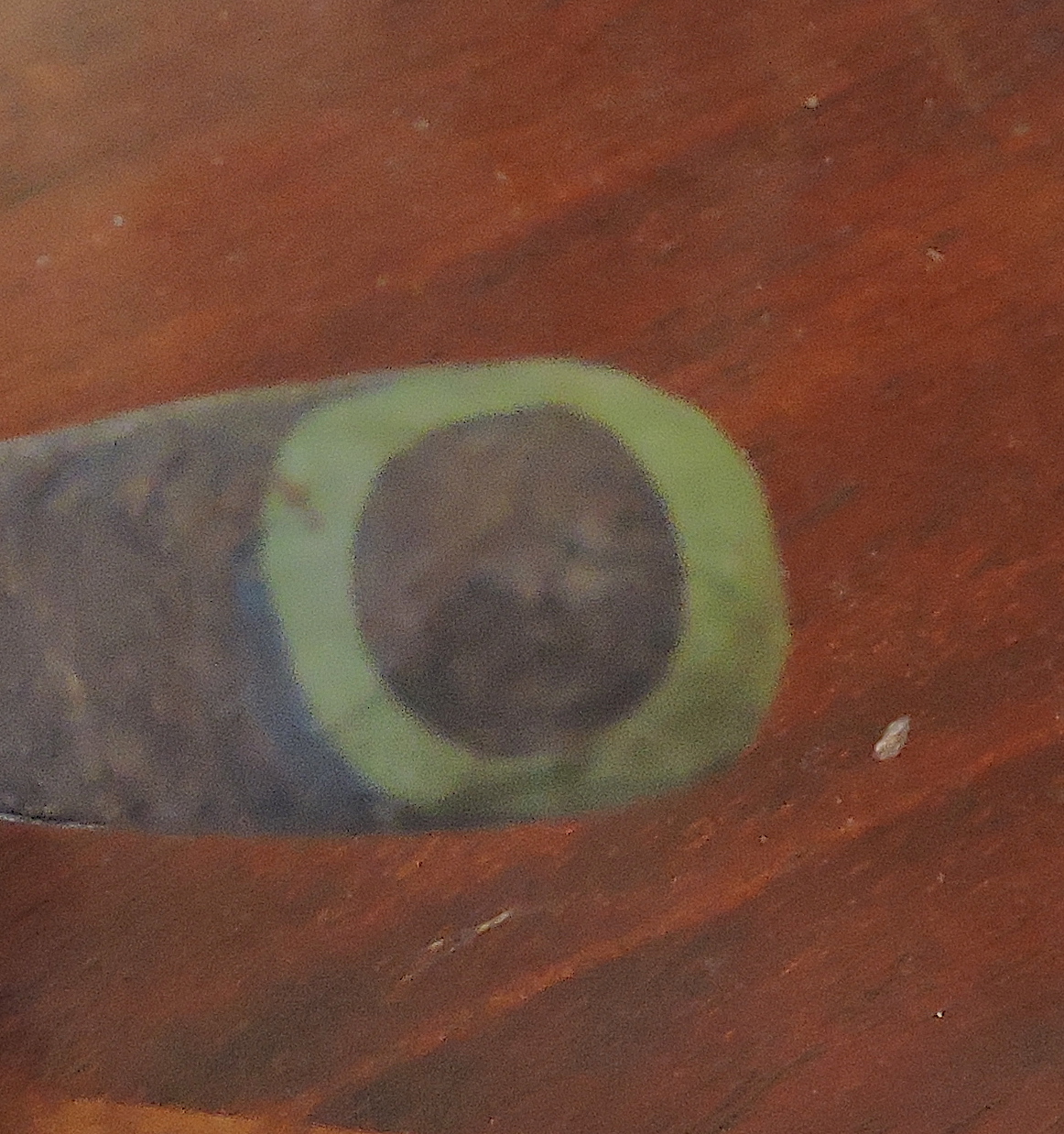 There are two bands on the 2012 by Oscar Barber Pole. The primary band is an olive green color version of the regular production 2012 by Oscar line. This features the text “2012” in a large black font. Below that is the text “by OSCAR VALLADARES” in gold font on a small black field. The remainder of the front of the band features gold and black adornments on it. The sides of the band are black. On the far right is an olive green version of the Oscar Valladares Tobacco & Co. logo.

There is a secondary band on the footer which is gold in color and features The Cigar Shop logo on it.

The start of the 2012 by Oscar Barber Pole delivered a mix of grass, coffee, and white pepper. The coffee notes quickly moved into the forefront with the grass and white pepper settling in the background. During the early stages, a natural maduro sweetness (what I classify as a combination of natural tobacco and dried fruit) emerged with the coffee notes in the forefront. The other interesting thing about the primary notes is the there was a smoky barbecue undertone tied with the maduro sweetness on the tongue.  Meanwhile, the retro-hale delivered additional layers of white pepper and cedar spice as well as an additional layer of maduro sweetness.

As the 2012 by Oscar Barber Pole moved through the first third, the maduro sweetness took control as the primary note. The smoky undertone remained present. Simultaneously, the grassy notes floated between the forefront and background. As for the coffee notes, they receded into the background, joining the white pepper.

By the second third, the maduro sweetness and smoky component diminished. This led to the coffee notes returning to the forefront before the midway point. By the start of the second half, the coffee notes were now grounded as the primary flavor. The grassy notes were still floating in and out of the forefront, but this was becoming less frequent. At the same time, the maduro sweetness was a close secondary note with the pepper in the far background. The smoky undertone was still present, but not quite as noticeable as the first third. Toward the end of the second third, there was an increase in pepper.

By the last third of the 2012 by Oscar Barber Pole, the cigar entered the wrapper portion that was mostly San Andres. During this stage, the coffee notes remained primary. The pepper and maduro sweetness were now close secondary notes. Most of the smokiness had dissipated. Finally, there still was some residual grassiness present. This is the way the 2012 by Oscar Barber Pole came to a close. The resulting nub was firm to the touch and cool in temperature.

Overall, the 2012 by Oscar Barber Pole performed quite well when it came to burn. There were some touch-ups required along the way, but, for the most part, the cigar maintained a straight burn path and had a relatively straight burn line. The resulting ash was light gray in color. This was an ash that was skewed toward being on the firmer side. The cigar maintained an ideal burn rate and ideal burn temperature. 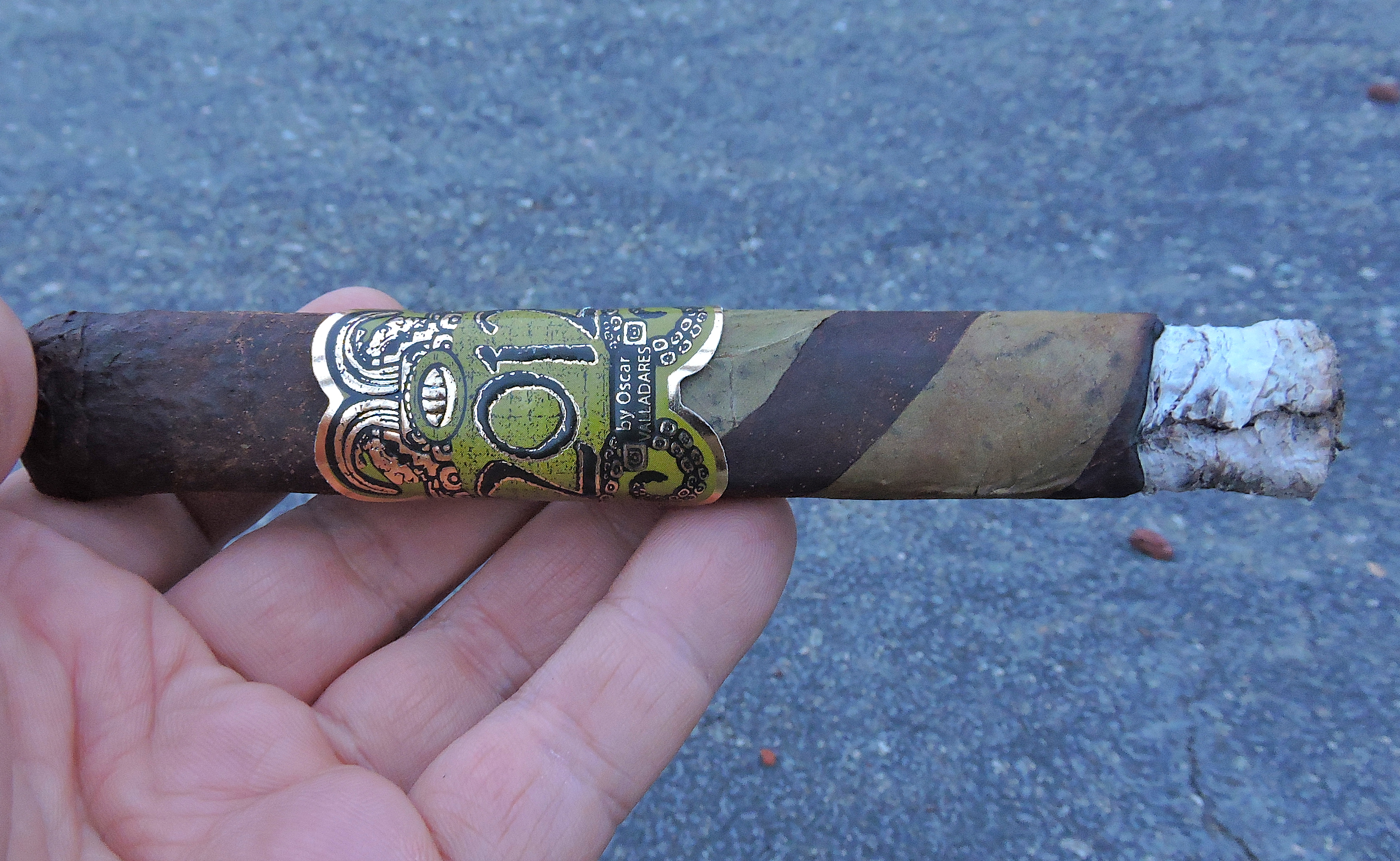 Burn of the 2012 by Oscar Barber Pole

When it comes to draw, normally I find box-pressed cigars can be a little more on the open side. What I liked about the 2012 by Oscar Barber Pole is that it still delivered a touch of resistance. The resistance was not overwhelming and I had no problem deriving the flavor from this cigar.

As for the body, the 2012 by Oscar Barber Pole also increased and by the second half, the cigar was in medium to full-bodied territory. By the last third, the increase in body leveled off.

In terms of strength versus body, I found the body has a slight edge during the smoking experience.

Whenever a new barber pole cigar comes out, I’m the first one to admit I want to smoke it. While there are some legitimate ones, there are also plenty of gimmicky ones. At the same time, I’ve been let down by many shop exclusive releases. I will admit, when I heard of the 2012 by Oscar Barber Pole project, I wasn’t confident that the combination of barber pole + shop exclusive would yield good results. In the end, I could not have been more wrong.

The 2012 by Oscar Barber Pole is a cigar that delivered plenty of flavors and succeeds in delivering a unique flavor profile. It’s not a cigar that delivers touches of candela grassiness, nor is it a cigar that overpowers you with candela grassiness. Instead, the candela-factor falls somewhere in the middle.  There were a few points where I found the flavors to be a bit muddled, but in the end, the cigar delivered very well flavor-wise.  One additional note – this is a cigar that was well-aged and ready to smoke, but I do see some higher potential with longer-term aging.

This is a cigar I could recommend to any cigar enthusiast – even ones who might not gravitate to a candela. It’s a cigar I would smoke and buy again. At $8.97, it’s easily one that earns the Cigar Coop Box Purchase Value Rating.

Cigars may be purchased at The Cigar Shop or thru retailer’s online store.

Note: The Cigar Shop is a former sponsor of Cigar Coop.