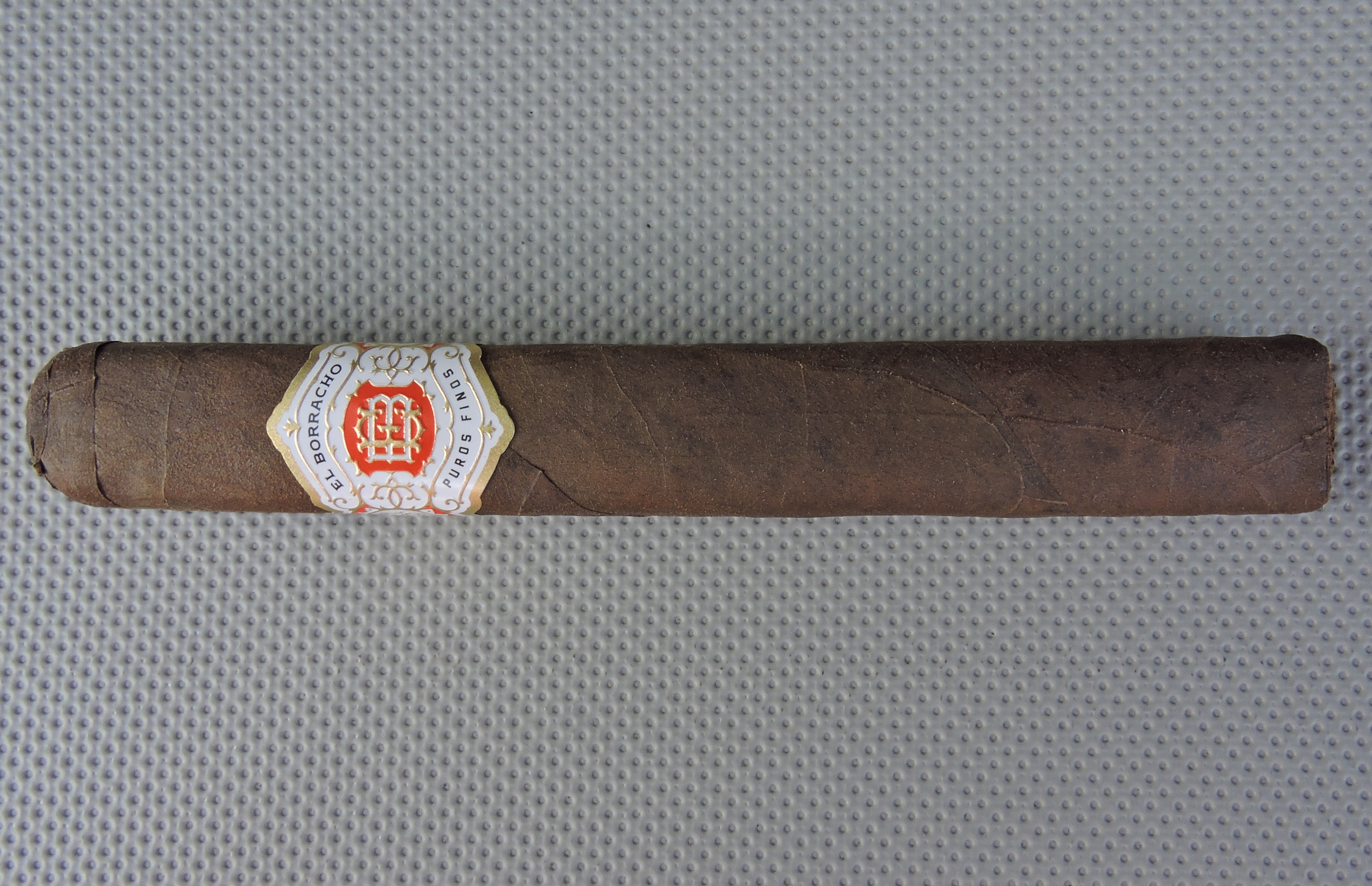 El Borracho is a cigar that comes from Ian Reith‘s Dapper Cigar Company. Reith is a cigar enthusiast with background in the Information Technology (IT) sector. After falling in love with cigars, he set out to take things to the next level – first learning as much as he could about the industry and then eventually creating his own cigar company. Currently, Reith’s Dapper Cigar Company has three brands in widespread commerce in his portfolio: Cubo, La Madrina, and El Borracho. He currently is working with two factories – Tabacalera Carreras and Nicaragua America Cigars SA (NACSA) to produce his lines. The El Borracho Natural blend comes from the NACSA factory – under the watchful eye of production manager Raul Disla (most recently known for working with Steve Saka on Mi Querida). Today we explore the El Borracho Natural in the Toro size.

El Borracho is positioned as a stronger offering in the Dapper Cigar portfolio. The name “El Borracho” translates to “The Drunk”. Reith credits Gustavo “Gus” Cura of Oliva Tobacco Company for helping him grow his knowledge in the cigar industry. Through Cura, Reith managed to meet what he termed a “renegade farmer” from Mexico named Carlos Guzman. Guzman has a 60-acre farm located in Valle San Andrés Tuxtla Veracruz. On this farm, he is known to use unconventional growing and curing methods. It is from this farm where Reith sources the San Andres wrapper used for El Borracho. Reith draws a humorous connection to Guzman and the brand and has said, “For Carlos to start a tobacco farm in San Andrés and challenge all the conventional growing & curing methods… he’s equal parts daring, crazy, and probably a little drunk. Because of this he truly embodies the El Borracho line and it wouldn’t be possible without him.” 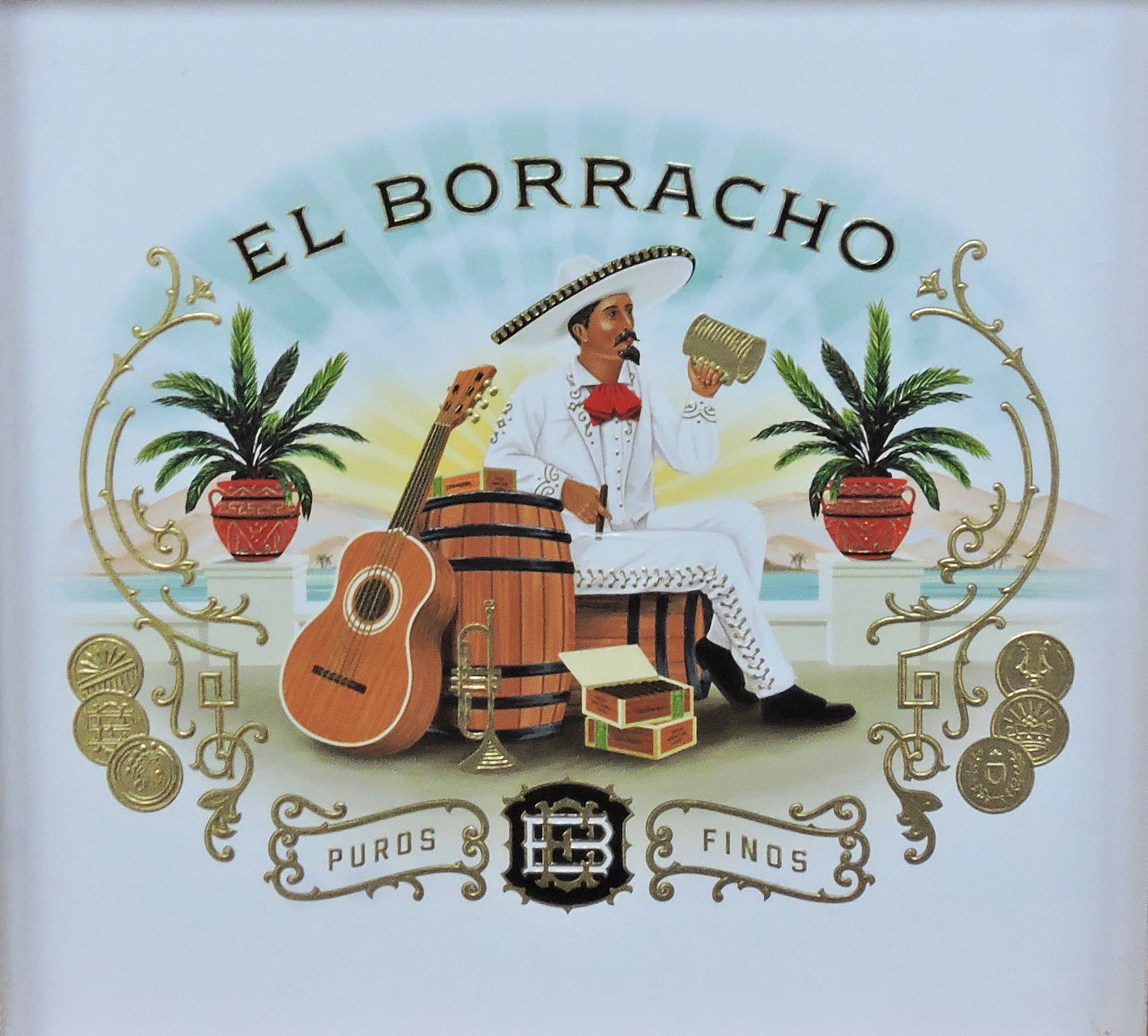 Inside box graphic of El Borracho

Without further ado, let’s break down the El Borracho Natural Toro and see what this cigar brings to the table.

Both Cuba and Guzman’s tobacco are used in the blend for El Borracho Natural. As mentioned above, the San Andres wrapper comes from Guzman’s farm. While it’s a dark wrapper, it is positioned as a natural wrapper as opposed to a maduro. Reith says the location of the farm and the unorthodox fermentation methods give this wrapper both a spicier and creamier profile.

The remainder of the blend uses tobacco from Nicaragua. The Nicaraguan tobaccos come through Oliva Tobacco Company via farms in Estelí, Condega, and Jalapa. According to Reith, the strength level of El Borraccho comes from higher primings found on Oliva Tobacco’s Finca La Joya farm in Estelí, Nicaragua. 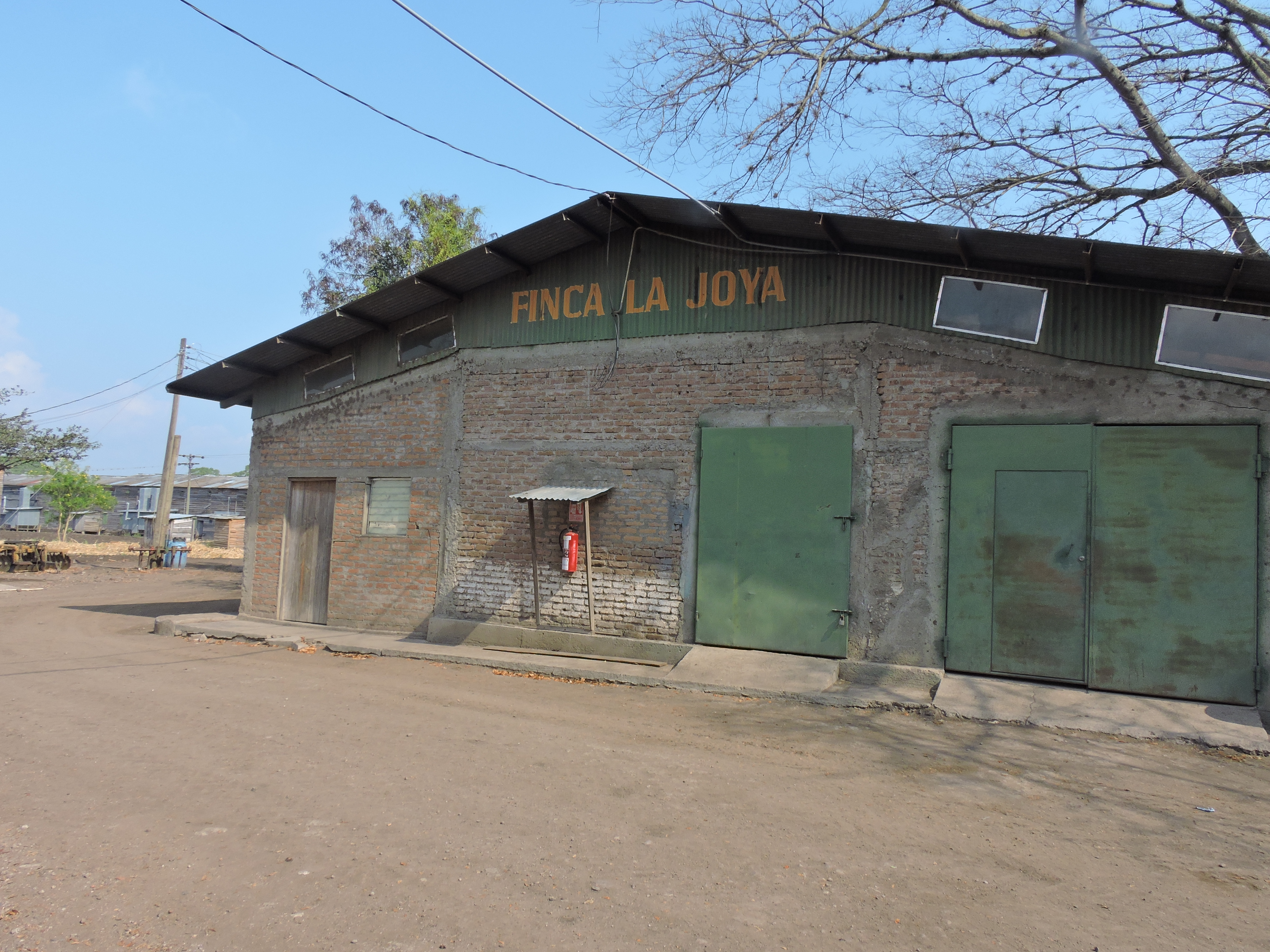 A view of Finca La Joya

The El Borracho Natural is available in three box-pressed sizes. Each is packaged in 16-count boxes. 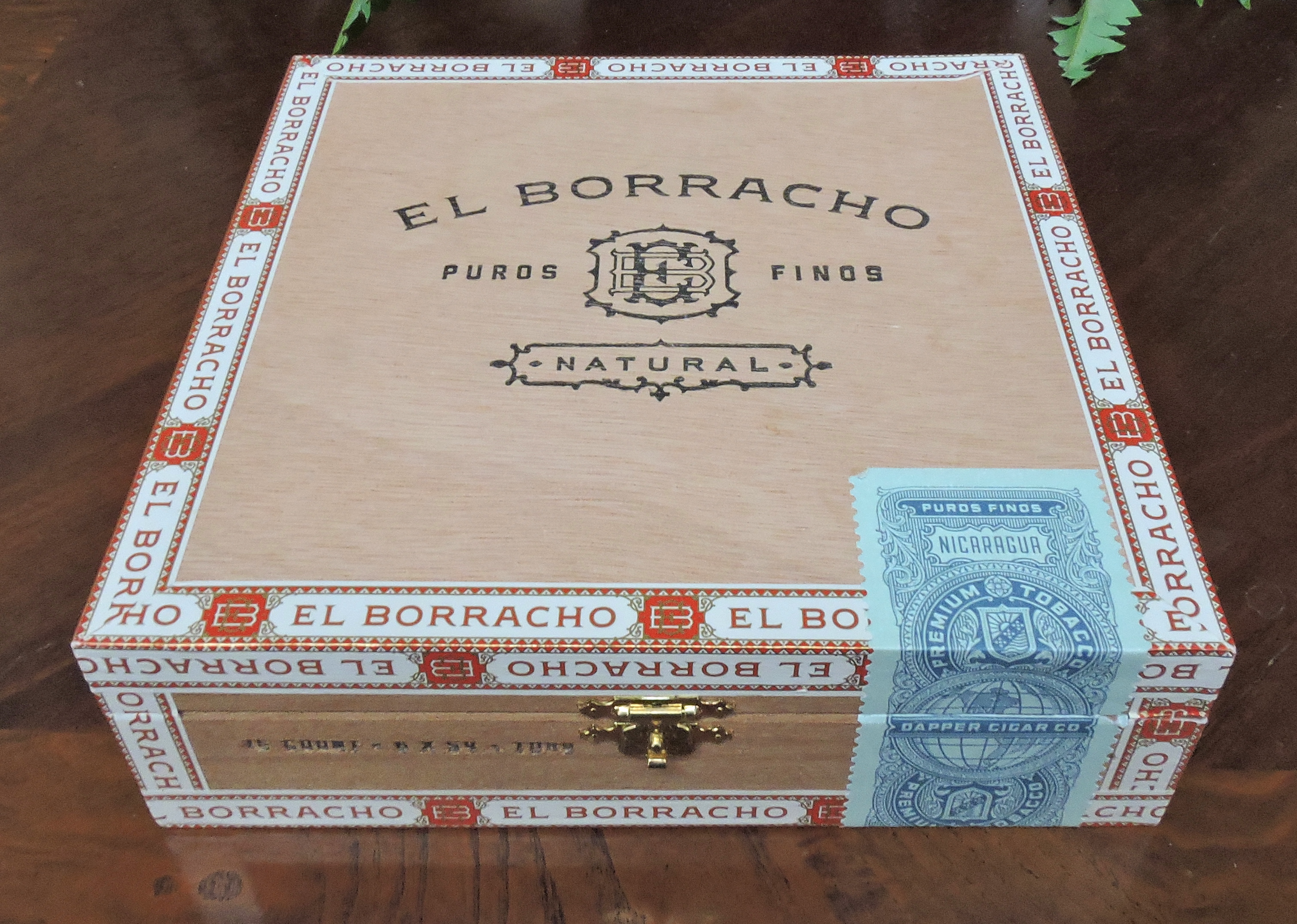 As mentioned, the San Andres Natural wrapper of the El Borracho Natural Toro still had a dark color. In this case, it had a chocolate brown color with some mottling on the surface. There wasn’t much in the way of oil on this wrapper. The wrapper had a slight sandy feel to it when held in the hand. This was a wrapper that was almost void of any significant visible veins and most of the wrapper seams were well-hidden. The box press itself was firm with the pressed corners on the sharper side.

Before lighting up the El Borracho Natural Toro, I used a straight cut to remove the cap. After the cap was clipped, I proceeded to the pre-light draw. The cold draw was simple, as it delivered a mix of cocoa and earth.  There was still enough going on with this pre-light draw to satisfy me. At this point, I was ready to light up the El Borracho Natural Toro and see what the smoking phase would have in store.

The El Borracho Natural Toro started out with a combination of earth, dark chocolate, and black pepper. Very early on the earth and dark chocolate notes moved into the forefront. Both of these notes soon would alternate in intensity levels. Meanwhile, the black pepper settled into the background on the tongue, but remained prominent on the retro-hale. As the cigar moved through the first third, some mineral notes surfaced.

As the El Borracho Natural Toro moved through the second third, the mineral notes started to become more prominent. Simultaneously, the chocolate notes would soon diminish. Just past the midway point, the mineral notes joined the earth in the forefront while the chocolate notes settled in the background. A subtle citrus/fruit note emerged. The combination of the sweetness from the chocolate and citrus note provided some nice balance to the earthy/minerally flavors up front. Meanwhile, the black pepper remained in the background, adding a spice component.

There wasn’t much change during the last third of the El Borracho Natural Toro except for an increase of pepper not on the tongue. While the pepper increased, it never became overpowering. This is the way the cigar experience closed out. The resulting nub was firm to the touch and cool in temperature.

The El Borracho Toro maintained a straight burn path overall. There was some occasional curvature on the burn line along the way, but this didn’t prove to be problem-some, nor did it result in frequent touch-ups. The resulting ash was mostly silver-gray with some dark spots. This was an ash that was skewed on the firmer side. Meanwhile, the burn rate and burn temperature were both ideal. 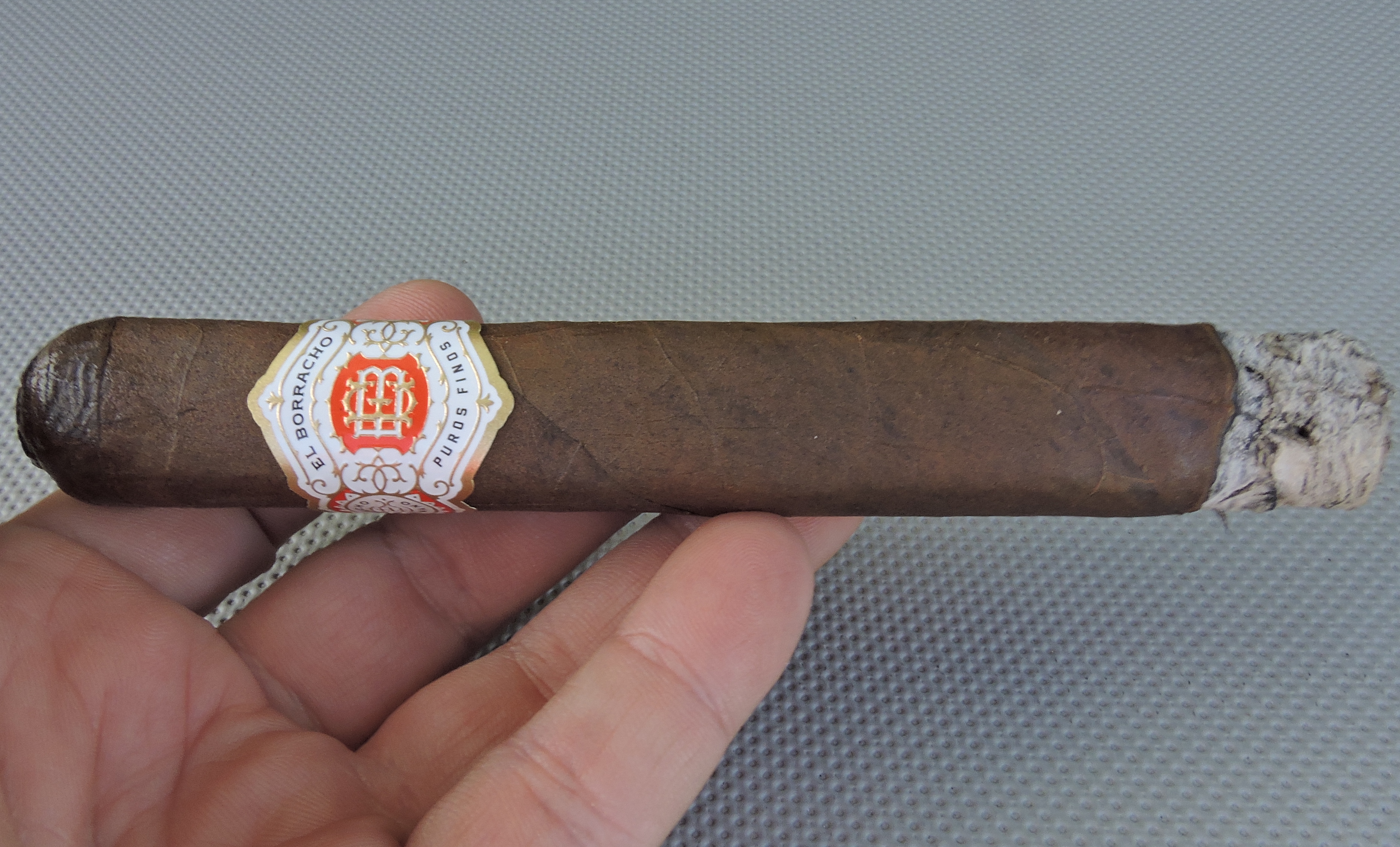 Burn of the El Borracho Toro

As for the draw, I really found this performed quite well. This draw had a touch of resistance – which is something I like. In the end, this was a low maintenance cigar to derive flavors from.

Overall, I found the El Borracho Toro to be a cigar to be on the upper end of medium to full for both strength and body from start to finish. There was a slight increase in the intensity levels of both attributes, but in the end both attributes didn’t quite cross the threshold into “full” territory.

One thing that really stood out to me is that the El Borracho Toro did a nice job at showcasing the Nicaraguan tobaccos instead of having the wrapper dominate. There were times the black pepper on the retro-hale was sharp and it reminded me that Mexican tobacco can exhibit that quality. At the same time, the notes of chocolate, earth, mineral, and citrus balanced each other nicely and added touches of sweetness and subtle bitterness to round out the flavor profile. In the end, I would describe this as a classic, but bold smoking experience. It’s a cigar I would steer to a more seasoned enthusiast. At $12+, it is a cigar that is pricier, but it does deliver a very nice smoking experience. This is one I would smoke again and buy a few to keep in my humidor.