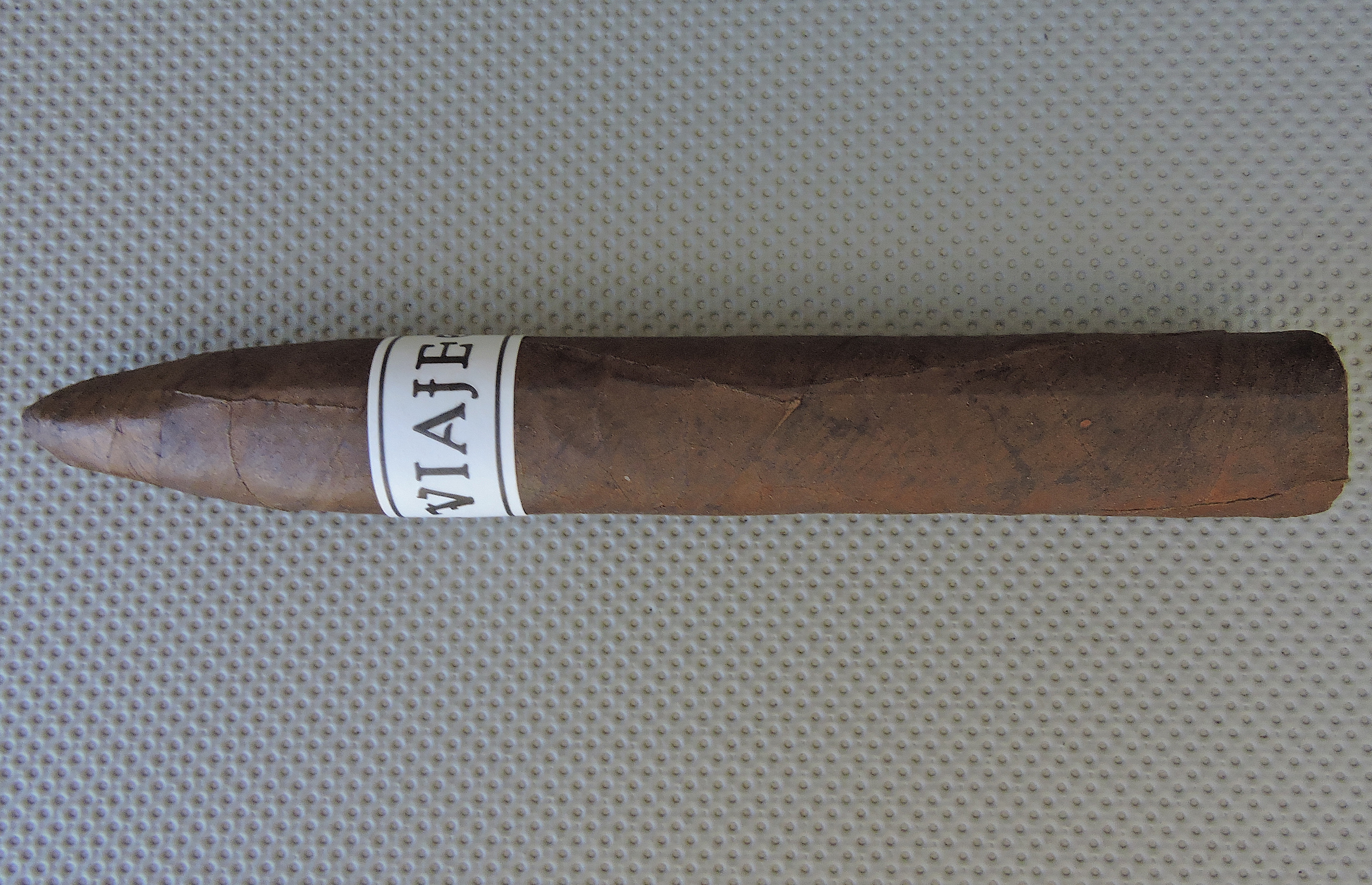 The Viaje Hamaki is a cigar that made its debut in 2017.  For Viaje Cigars, it would be the second cigar done in conjunction with the Quesada Cigars factory in the Dominican Republic. One year earlier, Viaje had released its Juntos 2016 release. Juntos would be the new name for the Viaje Collaboration Series, a series of projects where Viaje would work with a different cigar maker or factory to create a release. Juntos would not only be the first cigar Viaje would do with the Quesada factory, but it would also be the first Dominican puro that it would release. The name Hamaki is Japanese for “cigar” and it was inspired by brand owner Andre Farkas‘ travels to Japan. As with most Viaje releases, the Viaje Hamaki was a small batch release. Today we take a closer look at the 2017 release of the Viaje Hamaki.

While Hamaki was inspired by Farkas’ travels, it was not the first Japanese-inspired cigar. From 2010 to 2016, Viaje had released a cigar done in conjunction with Aganorsa Leaf (then called Casa Fernandez) available to only IPCPR attendees known as the Viaje Satori.  Shortly after the release of the Viaje Hamaki, there was a third Japanese inspired cigar known as the Viaje Hamaki Omakase. The release of the Omakase is one that is shrouded in mystery and Viaje has not disclosed who that particular cigar is being made with.

Packaging of the Viaje Hamaki (Photo Credit: The Cigar Shop)

Without further ado, let’s take a closer look at the Viaje Hamaki and see what this cigar brings to the table.

The Viaje Hamaki is a cigar consisting of 100% Dominican tobaccos. There are some similarities between Hamaki and the Juntos 2016 release in that both blends use a Dominican Negrito wrapper and a Dominican Criollo wrapper. Negrito is tobacco that has started to be seen on more blends as a wrapper. I’ve been told by several industry people that in the past many brands have shied away from using Dominican Negrito as a wrapper because it doesn’t play well with other tobaccos.

The 2017 release of the Viaje Hamaki was made available in one size – a 6 x 54 box-pressed torpedo. The cigar was packaged in 25-count boxes and according to the packaging, 300 boxes were produced.

The Negrito wrapper of the Viaje Hamaki had a milk chocolate-colored wrapper and was definitely on the darker side. Despite the dark color, some darker mottling can still be detected on the wrapper’s surface. This was a relatively smooth wrapper with a light sheen of oil on it. There were a few visible veins while the dark color of the wrapper did a good job at hiding the seams. The Hamaki had a firm press to it. The tapering of the torpedo was somewhat steep, yet still measured a little more than an inch.

As mentioned, the Viaje Hamaki utilizes Viaje’s White Label Project banding. This is a simple white-colored band with the text “Viaje” prominent in a black colored-font. There is a thin black pinstripe at the top and bottom of the band.

A straight cut was used to clip the tip of the Viaje Hamaki. I opted to use my Credo Special T cutter with the 36 ring gauge hole to get an ideal cut. This allowed me to get a smaller ring gauge cut and to take advantage of the tapering of this cigar. After clipping the tip, it was on to the pre-light draw phase. The cold draw delivered a mix of chocolate malt, cedar, and mineral notes.  I assessed this to be a satisfactory pre-light draw. At this point, I was ready to light up the Viaje Hamaki and see what the smoking phase would have in store.

During the second third, there were some classic earth notes that surfaced in the background. These earth notes increased in intensity and by the midway point they had displaced the chocolate malt as the primary note. During the second half, the red pepper increased and there was an underlying savory quality that was present during the smoking experience.

The last third saw the earth notes remain primary. The red pepper and mineral were the next most prominent notes. There were still both chocolate malt and savory notes present. This is the way the smoking experience of the Viaje Hamaki came to a close. The resulting nub was slightly soft to the touch and cool in temperature.

For the most part, the Viaje Hamaki maintained a straight burn line and a straight burn path. There was an occasional bit of jaggedness on the burn line, but this was mostly cosmetic and was easily remedied with a touch-up. The resulting ash wasn’t overly firm, but it wasn’t loose nor flakey either. This was an ash that had a salt and pepper color to it. Meanwhile, the burn rate and burn temperature were ideal. 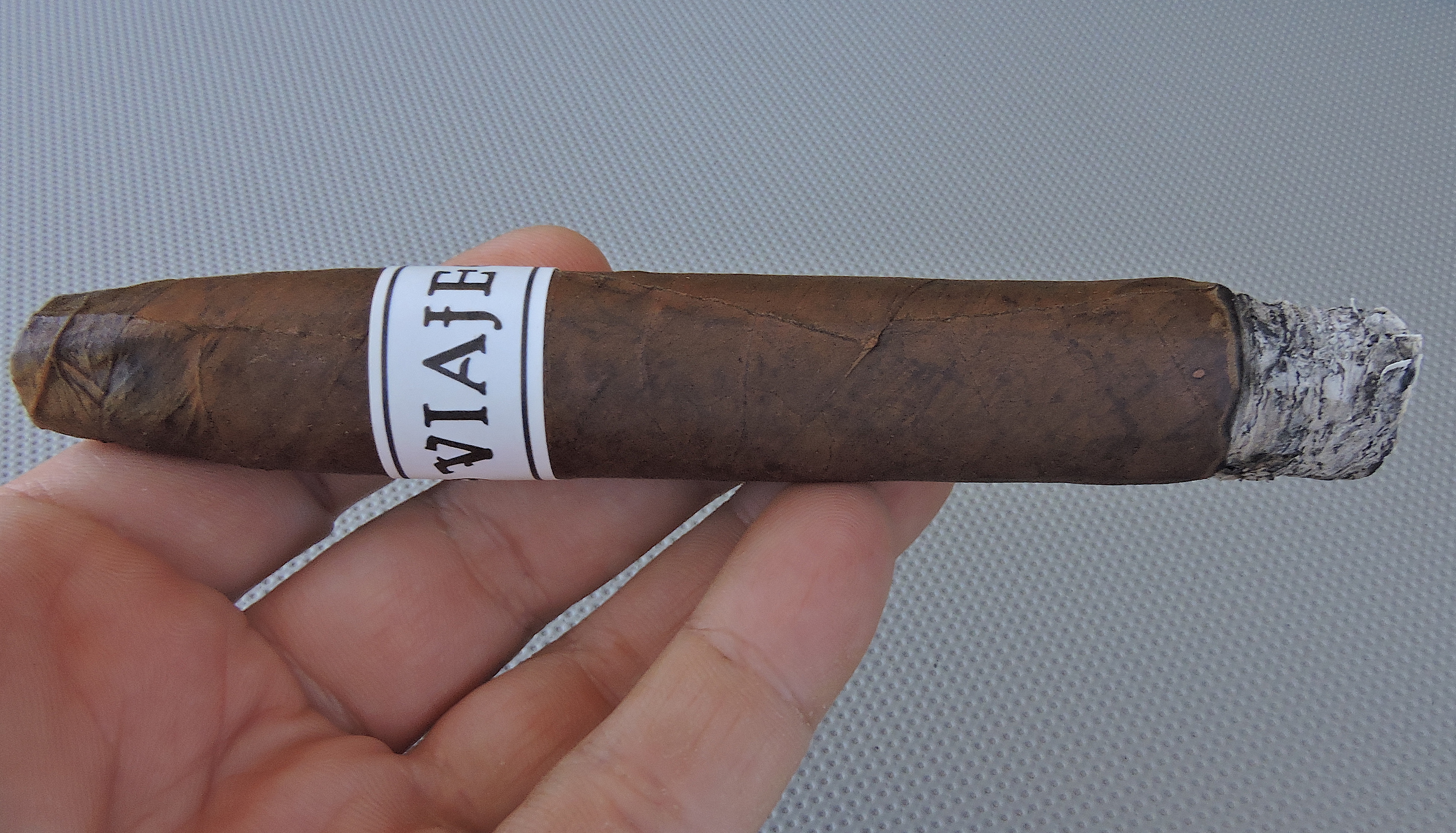 Burn of the Viaje Hamaki

The Viaje Hamaki’s draw was excellent. Many times box-press cigars will have their draw on the open side, but what I liked about the Hamaki is that there was a touch of resistance there. At the same time, the tip of the cigar did not get overly soft. The end result was an ideal draw where it was easy to derive flavors. Concurrently, there was a nice amount of smoke produced from this cigar.

In terms of strength versus body with the Viaje Hamaki, I found the body maintained a slight edge throughout the smoking experience.

The Viaje Hamaki was definitely a different type of cigar in terms of what I have had out of the Quesada factory before. It was a Dominican puro that brought many qualities that I have found on Viaje’s Nicaraguan puro brands. At the same time, this was a different cigar from anything I’ve had from Viaje – namely some of the savory undertones this cigar delivered were something I had not gotten on a Viaje release before. That being said, while this cigar gets credit for innovation, I still found that it lacked a bit of “wow” power to get it to the next level and fell a little short complexity-wise. I was just looking for a little more flavor-wise.

Given this is a bolder smoke, the Viaje Hamaki is a cigar I would recommend to a more experienced cigar enthusiast. As for myself, there was still enough going on with this cigar to buy one and smoke it again.