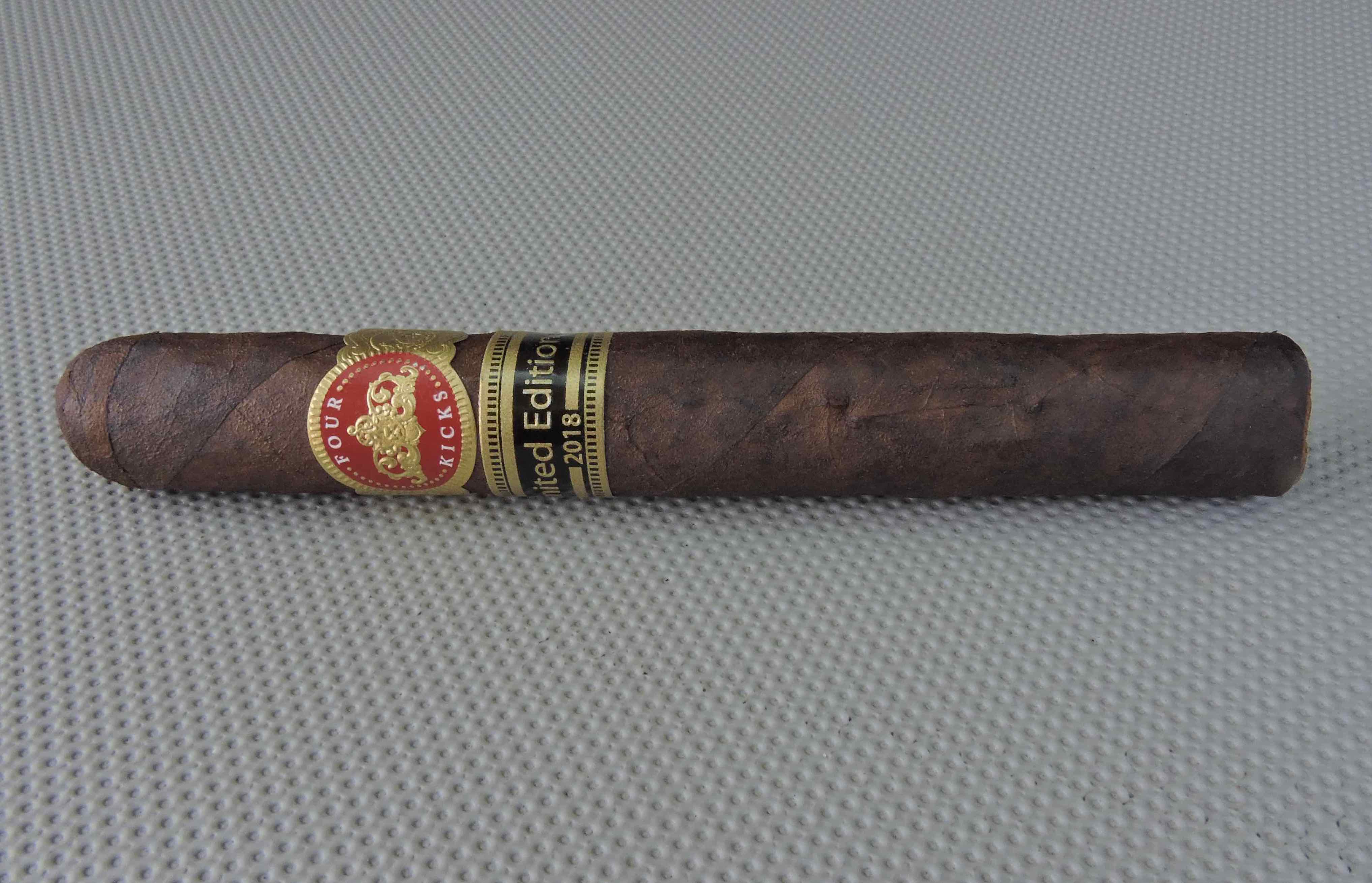 Four Kicks has been a foundation brand for Crowned Heads for nearly seven years. A year ago, the company opted to release a maduro counterpart known as Four Kicks Maduro. This is a unique cigar in that it uses a Habano wrapper from Connecticut that had undergone maduro fermentation. This is a wrapper that Ernesto Perez-Carrillo Jr. has been working with out of his Tabacalera La Alianza factory. Perez-Carrillo Jr. has also worked with this wrapper for his E.P. Carrillo Original Rebel Rebellious and his recently released E.P. Carrillo TAA Exclusive. It is a wrapper that is now used on the Four Kicks Mule Kick LE 2018.

Without further ado, let’s break down the Crowned Heads Four Kicks Mule Kick LE 2018 and see what this cigar brings to the table.

In addition to the Connecticut grown Habano wrapper, the remainder of the blend consists of Nicaraguan tobaccos. These are tobaccos that were found in previous editions of the Mule Kick.

The Connecticut Habano wrapper of the Four Kicks Mule Kick LE 2018 had a dark roasted coffee bean color to it  Upon closer examination, some darker mottling could be seen on the surface. There was some oil that also coated the surface of the wrapper. This was a slightly rugged looking wrapper and there were some visible veins. The darker color of the wrapper did a good job at hiding the wrapper seams.

There are two bands on the Four Kicks Mule Kick LE 2018. The primary band is the same design on the original Four Kicks cigar.  The front of the band features a gold crown on a red background. Over the crown is the text “FOUR” in white font, with “KICKS” below the crown also in white font. Most of the rest of the band has a gold foil design. There are three medallions on the left and right side of the band, adjacent to the front. The left logos have a “star” on them, while the right medallions are more themed around the rebellious nature of Four Kicks.

A straight cut was used to remove the cap of the Four Kicks Mule Kick LE 2018. After the cap was successfully clipped, It was time to commence the pre-light draw experience. The dry draw delivered a mix of mocha, wood, and a subtle amount of spice. The mocha was a classic fusion of black coffee and chocolate notes. In my opinion, the Mule Kick LE 2018 delivered a satisfactory pre-light draw. It was now time to light up this cigar and see what the smoking phase would have in store.

The Four Kicks Mule Kick LE 2018 started out with more notes of mocha and some black pepper. As the cigar moved through the early phases, the mocha flavor took on some coffee syrup and malt qualities. The pepper settled in the background and was joined by a touch of dried fruit. As the Mule Kick LE 2018 moved through the first third, the mocha alternated between coffee syrup and malt notes. Meanwhile, the retro-hale delivered a layer of red pepper.

By the start of the second third, the overall mocha notes morphed into a combination of black coffee and earth notes. The coffee syrup and malt qualities diminished greatly and dissipated by the midway point. Some wood notes surfaced with the pepper and dried fruit in the background. The woody notes also surfaced with the red pepper on the retro-hale.

Later in the second third, the earth notes increased and took over as the sole primary note. The coffee notes diminished into the background. There were still notes of fruit, pepper, and wood present as well. This is the way the Four Kicks Mule Kick LE 2018 came to a close. The resulting nub was cool in temperature, but slightly soft to the touch.

On each of the Four Kicks Mule Kick LE18 cigars I smoked, there were times there was a slight meander of the burn line. This wasn’t a frequent problem and was something quickly remedied by a touch-up. The resulting ash wasn’t overly firm, but it was far from loose and flaky. This was an ash that had a classic salt and pepper color complexion. Meanwhile, the burn rate and burn temperature both were in the ideal range. 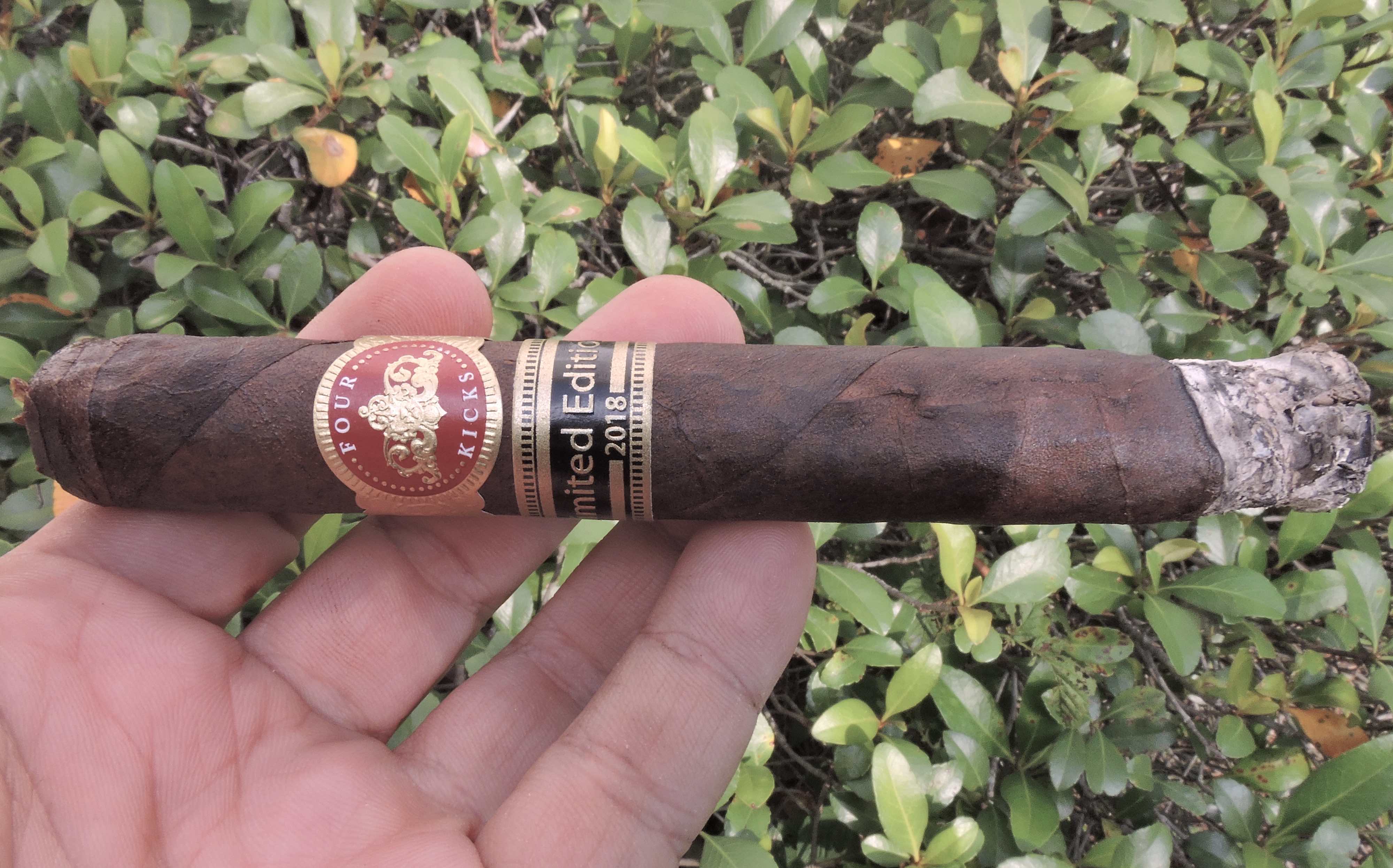 The draw to the Four Kicks Mule Kick LE 2018 performed excellently. It had a touch of resistance to it – which is something that I like. At the same time, deriving flavor from this cigar never became a difficult chore.

When it came to strength versus body, I found both attributes balanced each other very nicely with neither attribute overshadowing the other.

While it’s not a new wrapper that has been used on blends, I’ve liked what Ernesto Perez-Carrillo Jr. has done with the Connecticut Habano wrapper with the Original Rebel Rebellious. I was quite pleased when the team at Crowned Heads opted to use this wrapper on the Four Kicks Maduro – and I think it resulted in one of their best blends. With the Mule Kick LE 2018, the company has another winner. While I found this Mule Kick to be a little less on the bolder side than the Four Kicks Maduro and how I remembered the original Mule Kick LE 2012, I still found this is a cigar that delivered some very nice flavor. At press time, the Mule Kick LE 2018 is still a cigar that can be found. It’s a cigar I can recommend to any cigar enthusiast. It’s one that I would smoke again – and it’s one worthy of purchasing multiples for your humidor.