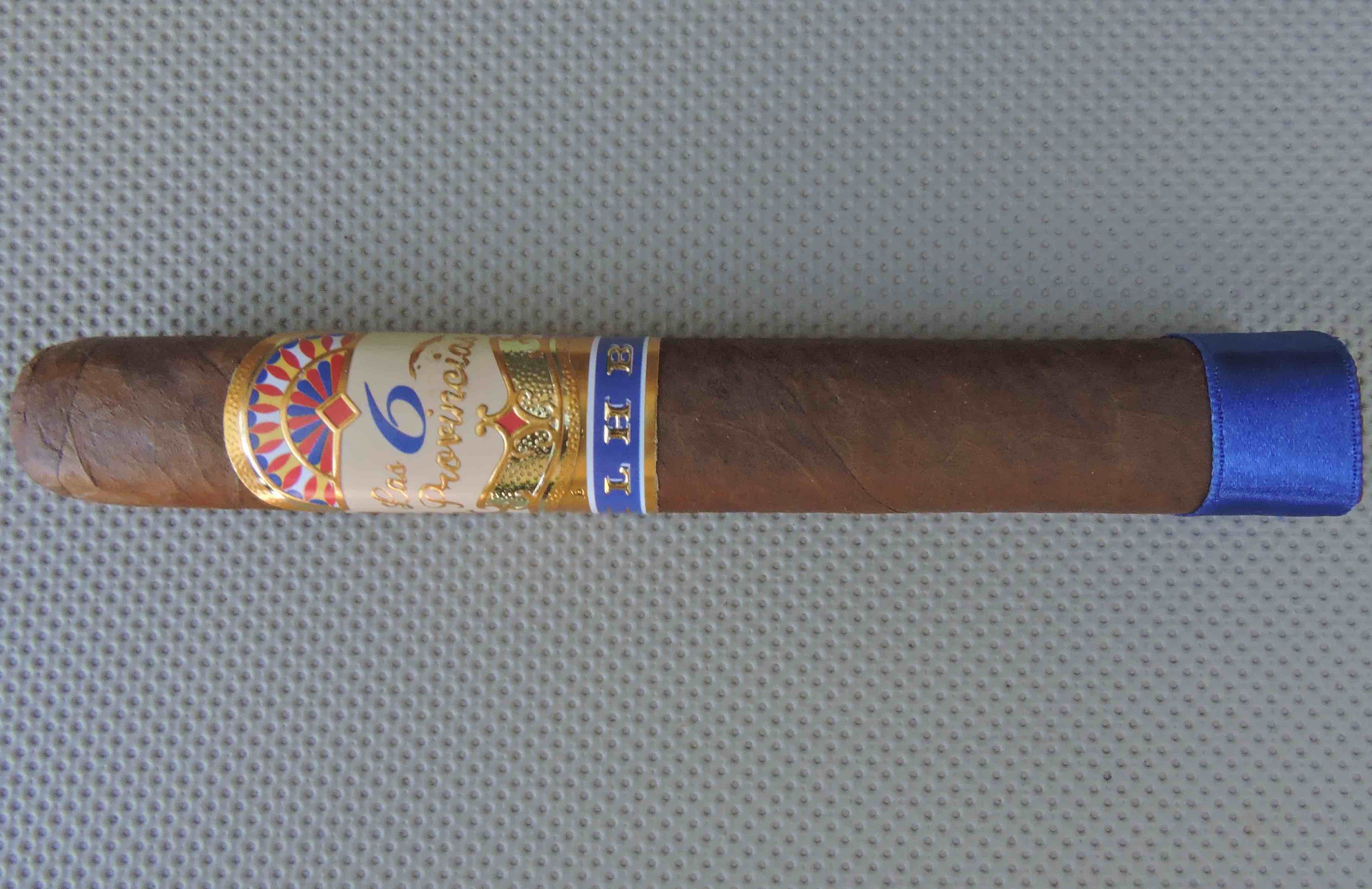 Just prior to the 2018 IPCPR Trade Show, Espinosa Cigars announced a new project known as Las 6 Provincias. It’s a series that pays homage to the pre-Castro era of Cuba. The packaging and banding has art work that takes you back to that period of cigar in Cuba. The name Las 6 Provincias means “six provinces” – and it refers to the six provinces that existed prior to the takeover of Cuba by Fidel Castro. There are six planned releases of Las 6 Provinces – with each having a unique blend, size, and associated artwork. The first one is called LHB and it pays homage to the La Habana province.The Las 6 Provinces LHB was officially launched at the 2018 IPCPR Trade Show and made its way to retailers afterward. Today we take a closer look at that cigar.

Las 6 Provincias is a project that was spearheaded by company founder Erik Espinosa’s son Erik Jr. The blend was worked on by Hector Alfonso Sr. at AJ Fernandez’s San Lotano factory. Fernandez acquired the facility almost two years ago. Since then Espinosa has handled some of its production out of that facility including the 2017 iteration of the  Murcielago and the majority of the 601 portfolio.

In addition to paying homage to pre-revolution Cuba, it also is intended to be Espinosa’s most premium cigar to date coming in at $16.50.

Without further ado, let’s take a closer look the Las 6 Provincias LHB and see what this cigar brings to the table.

The blend for Las 6 Provincias LHB consists of a Habano 2000 wrapper grown in Ecuador over Nicaraguan binder and filler.

Las 6 Provincias LHB is offered in one size -a 6 x 54 box-pressed Toro. There are two packaging options available for this cigar. The standard packaging presents the LHB cigar in ten-count boxes. 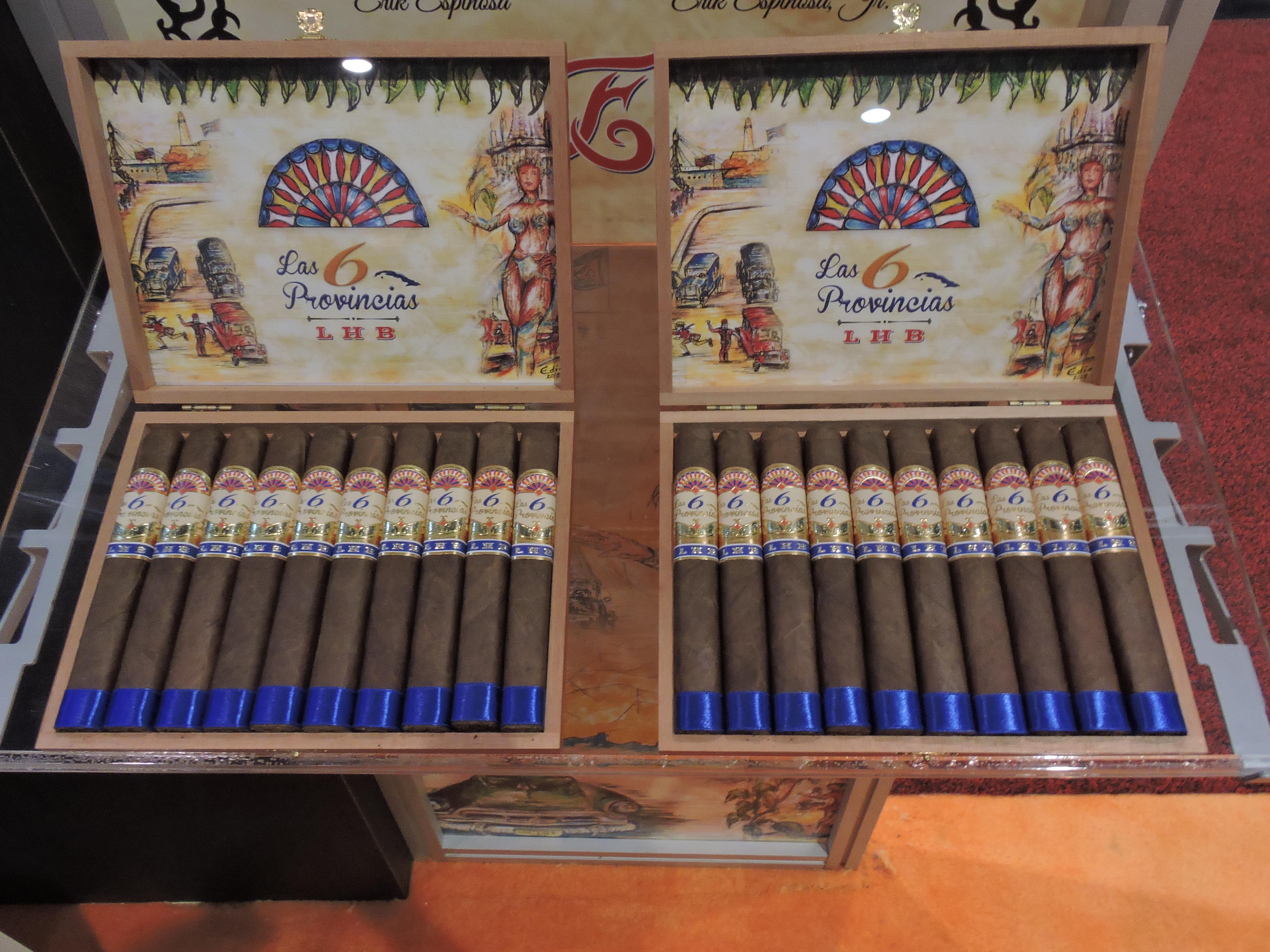 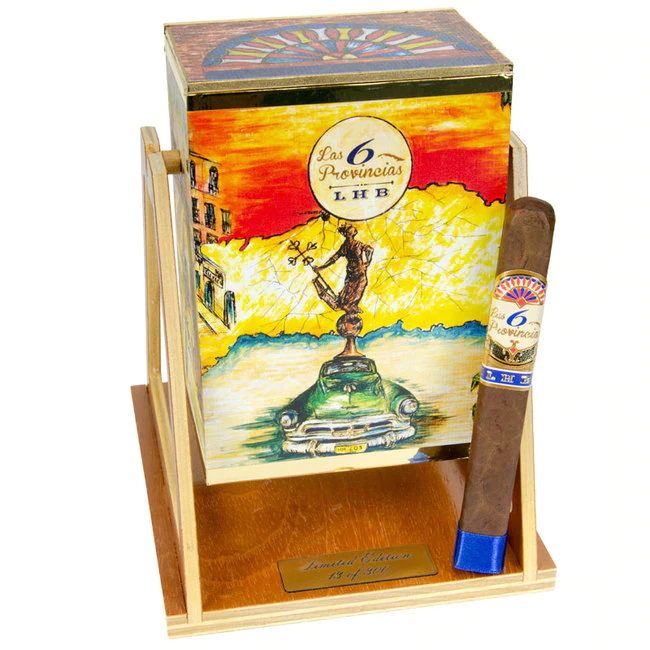 In addition, Espinosa Cigars has released a special limited edition packaging option in the form of a swing box. The swing box features a box containing 20 Las 6 Provinces LHB cigars hinged on a small scaffold like a swing. A total of 300 boxes have been produced and each unit is individually numbered.

The Habano wrapper of the Las 6 Provincias LHB had a medium brown color with a slight rosado tint to it. There was some oil on the surface of the wrapper. The wrapper was smooth with thin visible veins and most of the wrapper seams were well hidden. The box-press was a square Cuban-style soft-press.

There are two bands on the Las 6 Provincias LHB. The primary band has a pale yellow background with the text “Las 6 Provincias” on the front. The “6” is in blue while the remainder of the text is gold. Above the text are two concentric sunrise-like designs that are mostly red, blue, orange, and gold. There are blue, gold, and red adornments to the left and right. The left side of the band has the text “ESPINOSA” in small white on a blue background. The right side of the band has the text “CIGARS” that is also in white font on a blue background. The far right contains a red and white Espinosa La Zona circular logo.

Resting partially under the primary band is a secondary band. It mostly has a gold foil background. The lower part of the band contains a thick blue stripe surrounded by white pinstripes. On that band is the text “LHB” in gold font. To the left and right of the text are two parallel horizontal gold pinstripes. Finally, there is a blue ribbon surrounding the bottom of the cigar near the footer.

To commence the cigar experience of the Las 6 Provincias LHB, the ribbon from the footer was removed and then a straight cut was used to remove the cap. Once the cap was removed, it was time for the pre-light draw phase. The dry draw delivered a mix of quite an assortment of flavors – which was a sign of things to come. There were notes of leather, chocolate, cedar, mineral, and citrus that could be detected on the pre-light. Overall, this was an excellent pre-light draw. At this point, I was ready to light up the Las 6 Provincias LHB and see what the cigar experience would have in store.

The Las 6 Provincias LHB initially delivered notes of coffee, red pepper, and cedar. The coffee became primary early on and developed a creamy undertone. The cedar and red pepper settled in the background and were joined up some mineral and citrus notes. Meanwhile, there were also notes of red pepper on the retro-hale. At times there was some black pepper that also was present on the retro-hale.

Midway in the first third, a sweet chocolate note surfaced in the forefront, joining the coffee notes. There are times a combination of coffee and chocolate will have a fusion that I refer to as “mocha”. In the case of the Las 6 Provincias LHB, the chocolate and coffee were separate and distinct. Meanwhile the pepper, cedar, mineral, and citrus added complementary flavors from the background.

Toward the midway point of the Las 6 Provincias LHB a natural tobacco sweetness joined the chocolate and coffee notes. By this point the creamy undertones had subsided. There was some baker’s spice that emerged as well. Meanwhile the pepper, cedar, mineral, and citrus continued to contribute flavors from the background. However by this point, the pepper and mineral notes started to increase in intensity.

Later in the second third, some earth notes joined the coffee in the forefront. The mineral and pepper notes were close secondary notes. There were still notes of cedar and chocolate also still contributing to the flavor profile, but the baker’s spice went away. This flavor profile continued into the final third and right up until the close of the cigar. When the Las 6 Provincias LHB came to a close, the resulting nub was soft to the touch and cool in temperature.

Burn-wise, Las 6 Provincias LHB performed very well. The cigar maintained a straight burn path from start to finish. There was an occasional bit of curvature on the burn line, but this didn’t really warrant any additional touch-ups above the norm. The resulting ash had a salt and pepper color. It wasn’t the firmest ash, but at the same time, it wasn’t a loose or flaky ash. Meanwhile, the burn rate and burn temperature were both ideal. 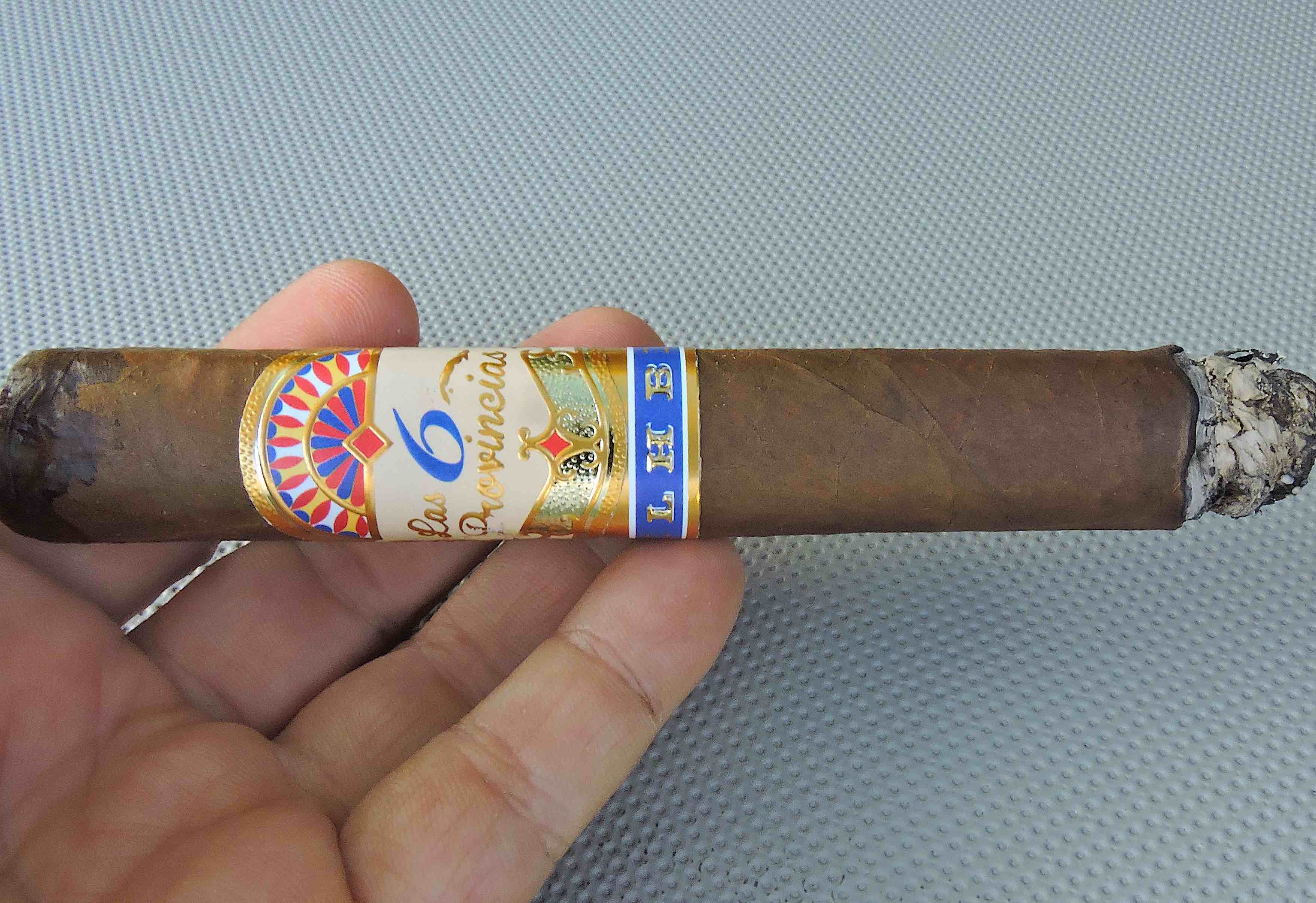 Burn of the Las 6 Provincias LHB

The draw of the Las 6 Provincias LHB had some level of openness to it. While I realize box-press cigars don’t always provide that “touch of resistance” that I like, I still found this jut a little more open than I prefer. I didn’t find this resulted in any other adverse effects other than forcing me to smoke at a controlled pace.

The Las 6 Provincias LHB opened up as a medium strength, medium-bodied cigar. This is a cigar that builds up in intensity and just past the midway point, both attributes progressed into medium to full territory. Both the strength and body continued to gradually build up in intensity in the second half, but didn’t approach the “full” area of the spectrum.

In terms of strength versus body, I found both attributes balanced each other nicely with neither overshadowing the other.

The first two-thirds of the Las 6 Provincias LHB were stellar. The final third comes back to earth a bit. It’s not that the last third was not enjoyable, it’s just it was up against a bar set high during the first two-thirds. In the end, the positives outweighed the minuses.

At $16.50, it’s a pricier cigar, but it delivered everything I would expect from a cigar like this. Las 6 Provincias LHB is a cigar I would probably steer to a more seasoned cigar enthusiast, but wouldn’t discourage the novice from smoking. As for myself, Las 6 Provincias LHB  is one I would smoke again. The ten box option is a no-brainer, but if you want the collectible box it’s certainly worth it as well. Either way, it’s a cigar worthy of a box purchase.