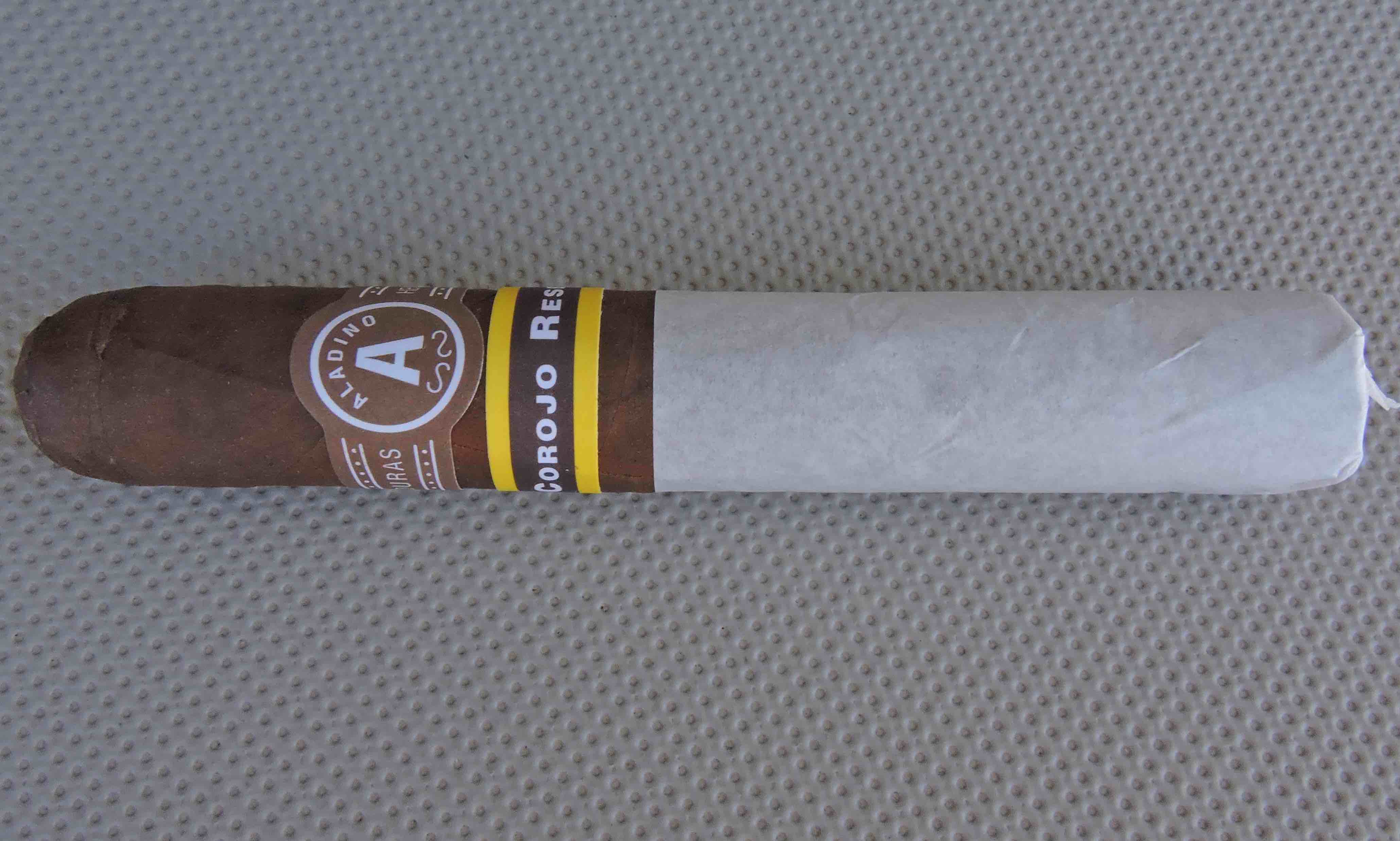 JRE Tobacco Company is owned and operated by the father and son team of Julio R. Eiroa and Justo M. Eiroa. The Aladino name can be traced back to the 1970s. There was a historic movie theater in Danlí, Honduras known as El Cine Aladino. This theater was operated by Christian and Justo Eiroa’s grandfather. Today, Christian owns the Aladino factory, which is in the theater’s former location. Aladino is also the name that Julio Eiroa chose to name one of his brands. When Aladino was released, this was a brand positioned as delivering a classic, “old-fashioned” cigar experience reminiscent of those during the “golden age” between 1947 and 1961.

Without further ado, let’s break down the Aladino Corojo Reserva and see what this cigar brings to the table.

Side view of the Aladino Corojo Reserva

As mentioned, the Aladino Corojo Reserva consists of 100% Authentic Corojo grown on the Eiroa Tobacco farm. The blend incorporates high priming corona into the blend.

The Aladino Corojo Reserva is available in one size – a 5 x 50 Robusto. Each is presented in 20-count boxes. 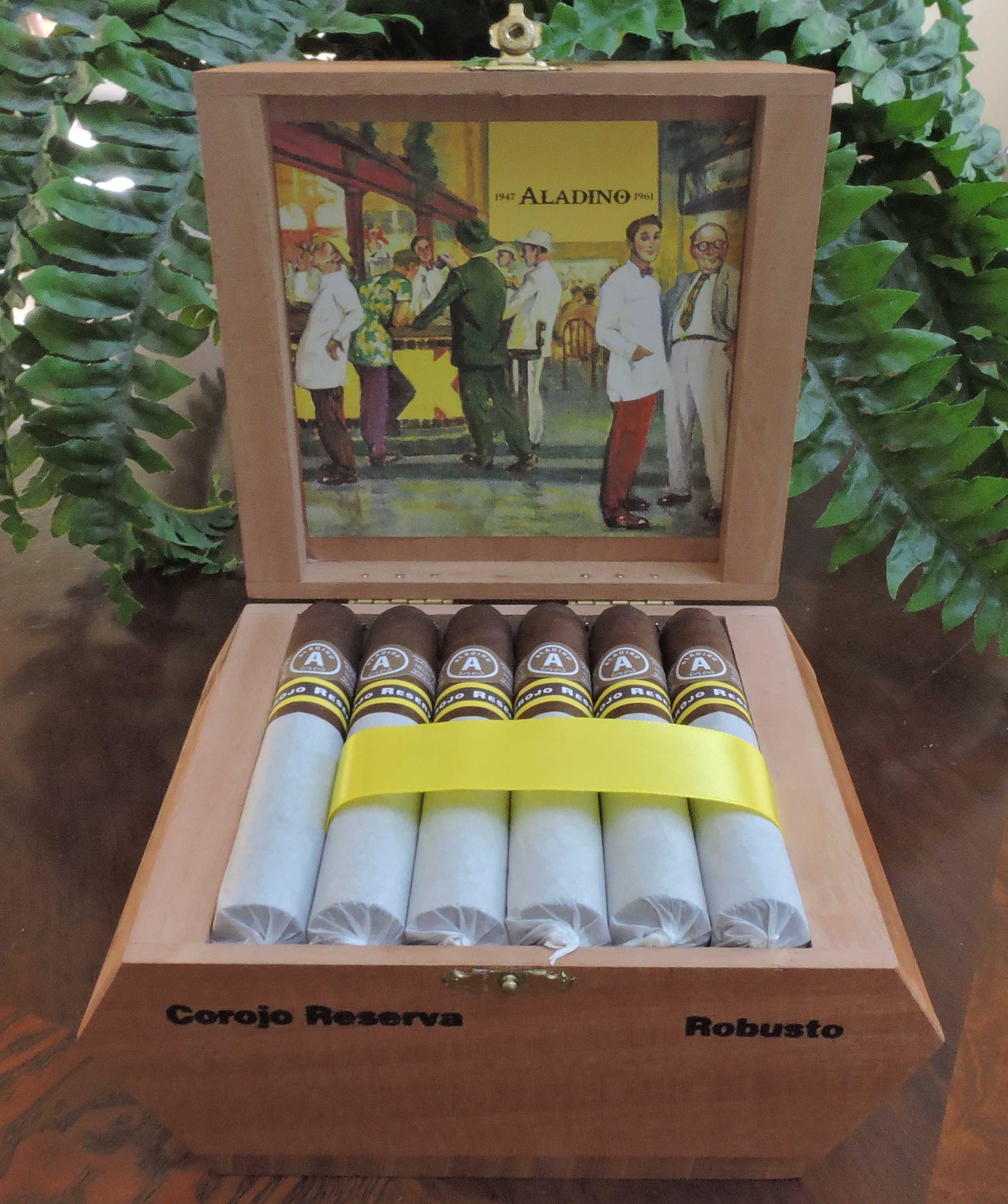 The Authentic Corojo wrapper of the Aladino Corojo Reserva had a dark cinnamon color to it. Upon closer examination, some darker mottling can be seen on the surface. This was a wrapper that did not have much oil on the surface. While there were some visible veins and minimally visible wrapper seams, I still found the surface of this wrapper to be on the smoother side. 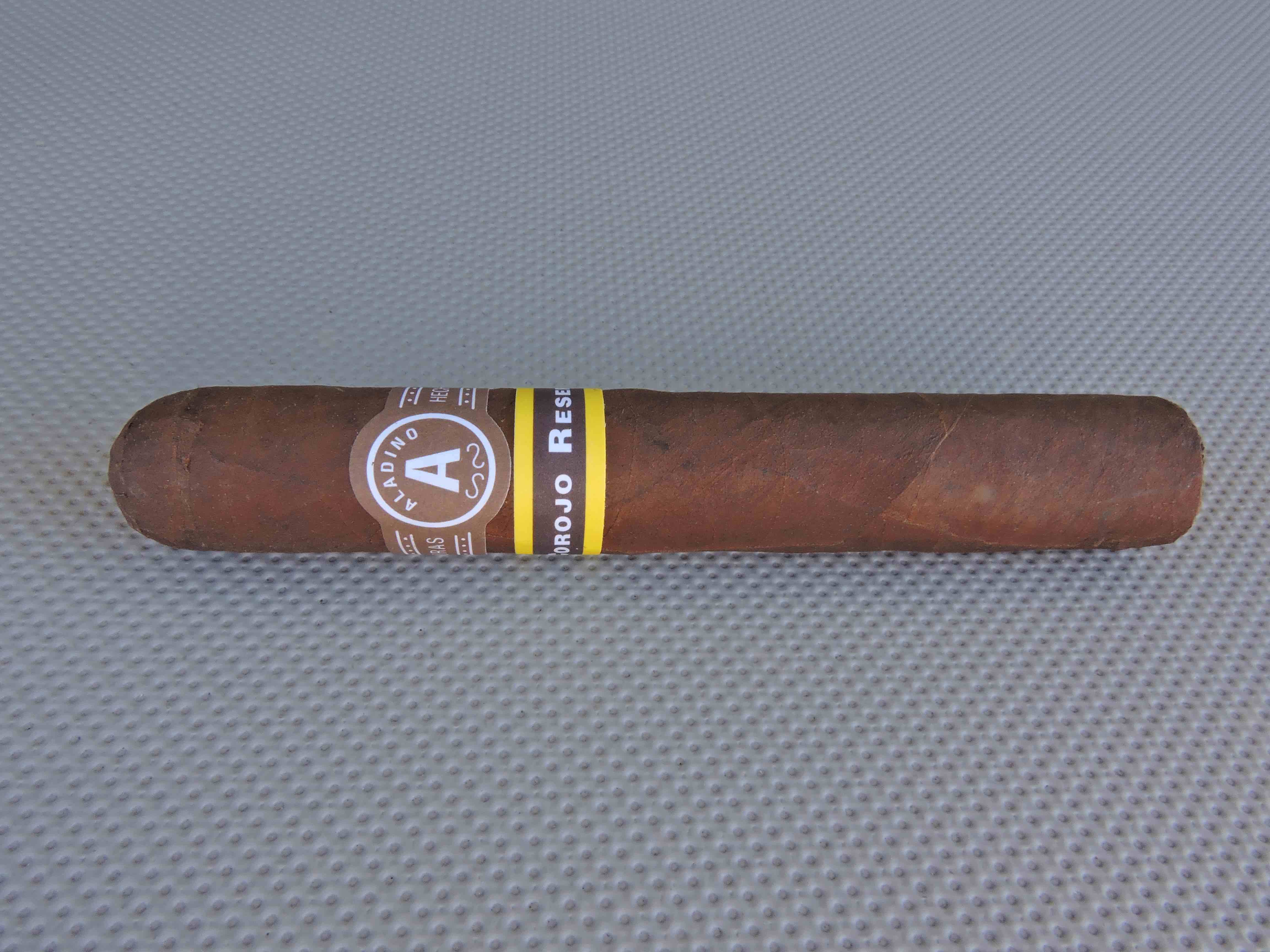 The Aladino Corojo Reserva features two bands. The primary band is brown with white font.  The front and center of the band features a brown circular field with white trim. On that field is a large shied “A” with the text “ALADINO” arranged in a curved fashion above it. To the left of the circle is the text “HONDURAS” while to right is the text “HECHO A MANO” – both in white font. 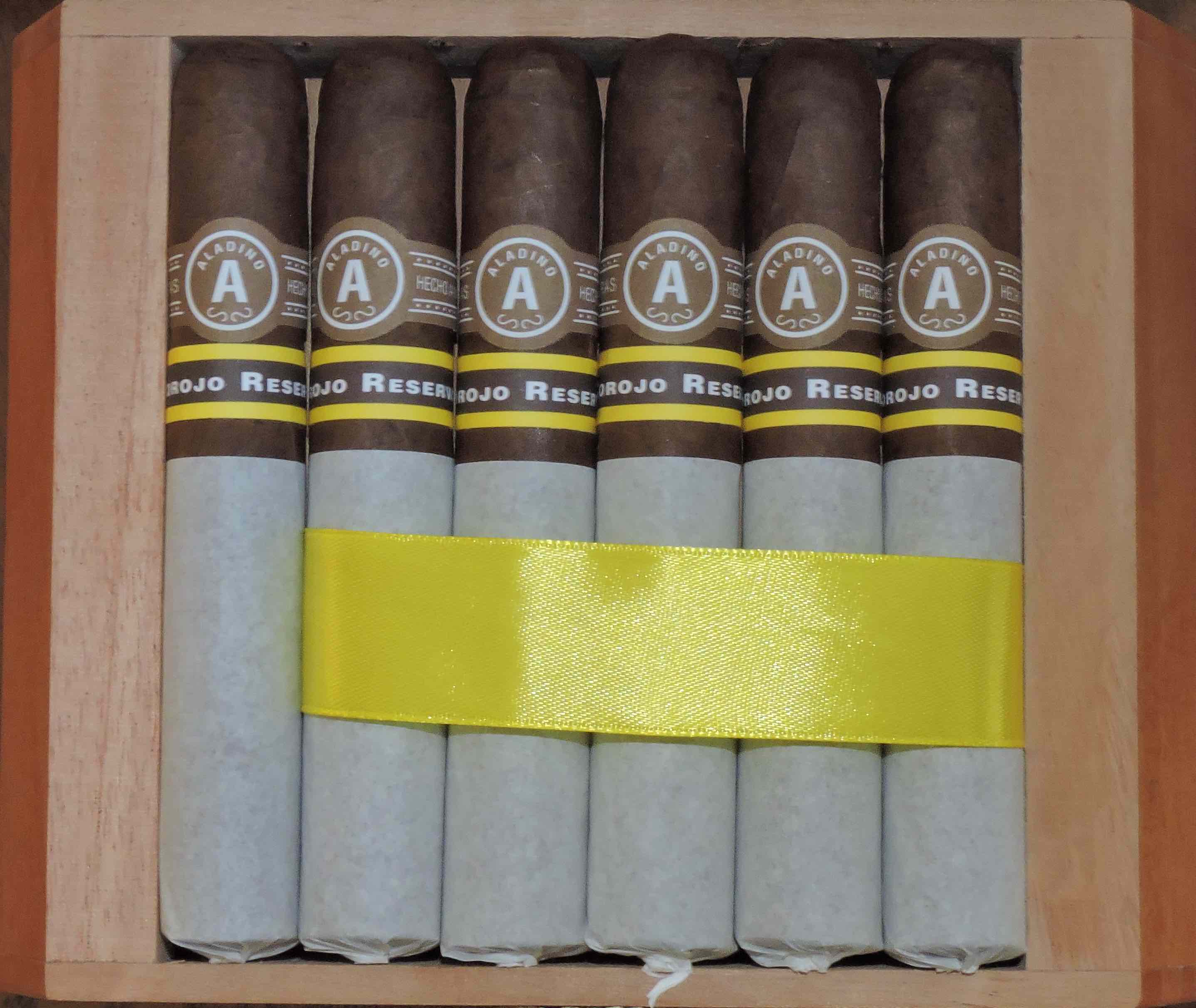 Close Up of the Aladino Corojo Reserva

After pulling the sleeve off the Aladino Corojo Reserva, a straight cut was used to remove the cap. It was then on to the pre-light draw ritual.  The cold draw delivered a combination of coffee and earth notes. There was a slight pepper note and a touch of natural tobacco sweetness. I considered this to be a was very good pre-light draw. At this point, it was time to light up the Aladino Corojo Reserva and move on to the smoking phase.

The Aladino Corojo Reserva started off with a blast of assorted pepper. The spices quickly subsided into the background and notes of classic wood, coffee, baker’s spice, bing cherry, and cedar emerged. Early on the woody notes moved into the forefront. During the first third, there was a creamy texture to the wood notes. Meanwhile, the coffee notes, pepper and baker’s spice settled into the background while the cherry and cedar notes were more distant. Meanwhile, there was a sharp mix of red and black pepper on the retro-hale.

The last third saw the coffee notes remain in the forefront. The pepper and cedar notes were secondary. There still were touches of classic wood and lemon rind present as well. This is the way the Aladino Corojo Reserva came to a close. The resulting nub was firm to the touch and cool in temperature.

The Aladino Corojo Reserva is a well-constructed cigar and this is reflected nicely on the scores of burn and draw. The Corojo Reserva maintained a straight burn path from start to finish and a mostly straight burn line. The resulting ash was tight and firm with a light gray color.  Meanwhile, the burn rate and burn temperature were both ideal. 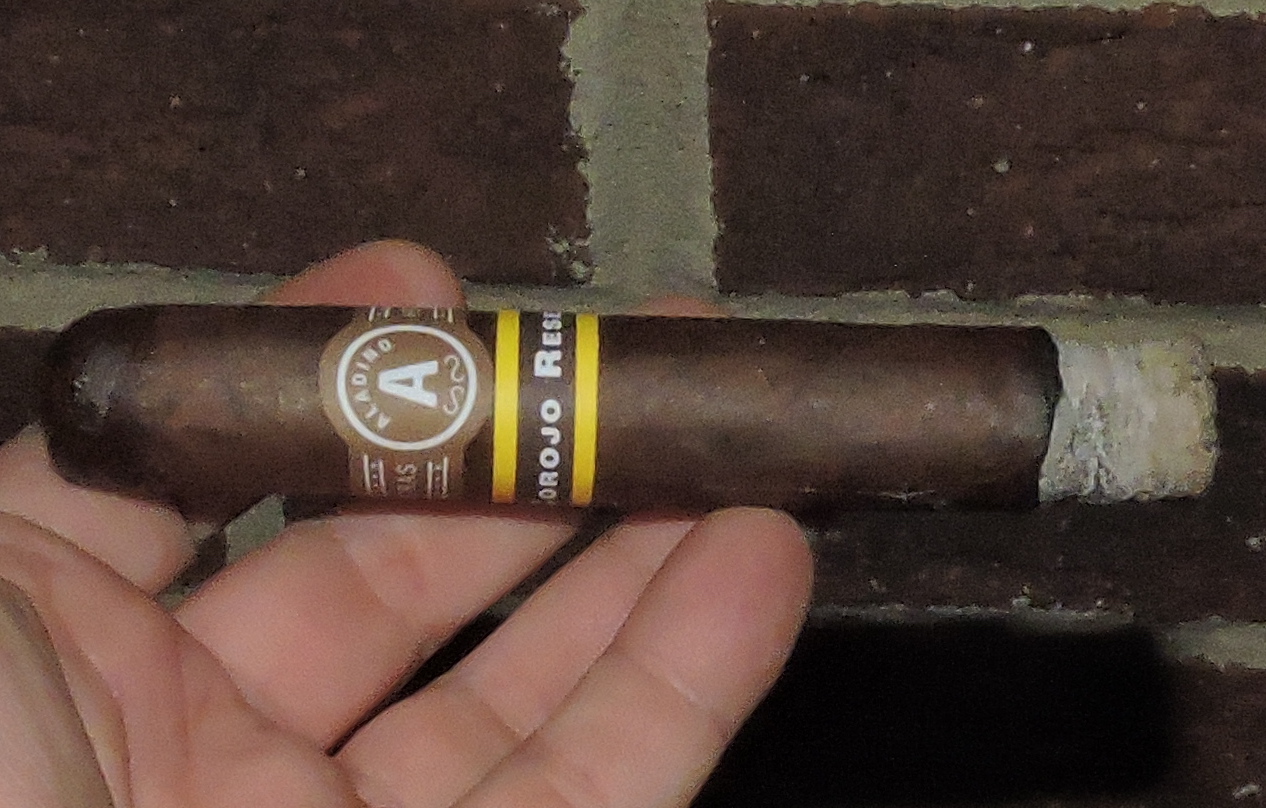 Burn of the Aladino Corojo Reserva

As mentioned, the Aladino Corojo Reserva was intended to be a bolder offering and this cigar easily lives up to expectations. The strength and body of this cigar out of the gate are medium to full. Particularly, the retro-hale will contribute to the depth of the flavors.  Toward the end of the second third, there was an increase in strength resulting in the Corojo Reserva moving into full territory. There also was an increase in body along the way, but it wasn’t enough to cross into full-bodied territory.

In terms of strength versus body, I found both attributes to be relatively even. By the last third, I thought the strength had the edge, but this wasn’t a case where the strength overwhelmed the flavors.

Two years ago, the Aladino Elegante landed as our #2 Cigar of the Year. Now JRE Tobacco takes things to the next level with the Aladino Corojo Reserva. This just isn’t an amp’d up Aladino cigar. It is a cigar that tells its own story. It brings forward the total package with a cigar experience: excellent flavor, excellent construction, and plenty of complexity. The 5 x 50 Robusto format seemed tailor-made for this cigar. Because this is a bolder cigar, it’s one I’d recommend to a more experienced cigar enthusiast. On the other hand, if a novice wanted to try something that is very close to the full-range, the Aladino Corojo Reserva is one I would not hesitate to recommend. As for myself, this is a cigar beyond box worthy. It’s one worthy of a battle with Chuck Norris for.