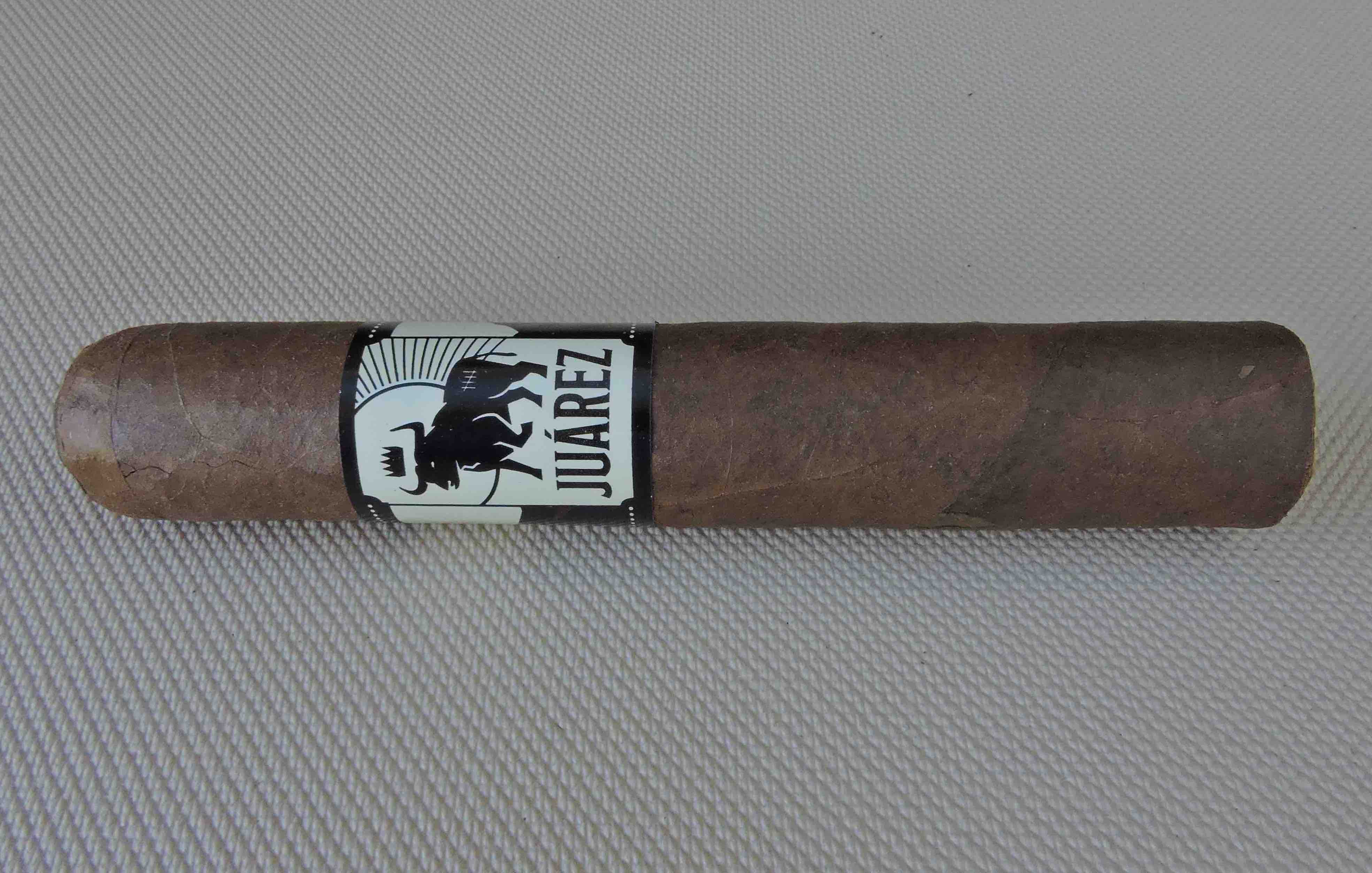 Late in 2018, Crowned Heads Cigars announced an exclusive offering to Thompson Cigar known as Juarez. It is the latest Crowned Heads line to be inspired by the song Cocaine Blues. In particular the reference to Juarez comes in that song’s lyrics (“Made a good run but I run too slow they overtook me down in Juarez Mexico”). Also inspired by Cocaine Blues include the Jericho Hill line (which not only is referenced from the song, but also has two vitola names “Willy Lee” and “Jack Brown” referenced as well). When it came to Juarez, Thompson Cigar asked Crowned Heads to consider a value-priced alternative to Jericho Hill. At the time, Crowned Heads had been experimenting with blends coming out of a small factory in Estelí called Tabacalera Pichardo. After being impressed with the quality of some of these blends, Crowned Heads made a decision to use one of them to be the exclusive offering to Thompson. Today we take a closer look at the Juarez offering in the 4 3/4 x 52 (Robusto) size.

2018 was a pivotal year in the history of Crowned Heads. Prior to that year, Crowned Heads had exclusively worked with Tabacalera La Alianza (owned by Ernesto Perez-Carrillo in the Dominican Republic) and the My Father Cigars factory (owned by the Garcia family in Estelí, Nicaragua). 2018 saw Crowned Heads start to produce some smaller batch releases out of other factories. This was seen with the Buckeye Land (an exclusive for Ohio) coming out of La Gran Fabrica Drew Estate and now Juarez coming out of Tabacalera Pichardo.

According to Crowned Heads, Tabacalera Pichardo was established in 2005 (then known as Dhatuey Tobaccos). It was founded by Don Eradio Pichardo. Originally from Cuba, Pichardo is a third-generation agriculturist who worked under the late Arsenio Ramos. In 2014 Pichardo teamed up with entrepreneur and sommelier Luciano Meirelles, who helped expand the operation. Today Tabacalera Pichardo is producing cigars for 16 brands and 12 different countries.

Without further ado, let’s break down the Juarez 4 3/4 x 52 offering and see what this cigar brings to the table.

Juarez is a four-country multi-national blend. Like Jericho Hill, it features a San Andres Mexican wrapper, but the rest of the blend is different, incorporating tobaccos from Ecuador, Nicaragua, and the Dominican Republic.

The Mexican San Andres wrapper of the Juarez 4 3/4 x 52 was a shade or two lighter than the average San Andres maduro wrapper. It had more of a dark wood color to it. There was a light coating of oil on the surface. The surface was slightly bumpy with some thin visible veins. At the same time, the wrapper was still dark enough to make the wrapper seams not very noticeable.

The band of the Juarez has a pale yellow background with black font. It’s certainly a simpler band design compared to many of the other Crowned Heads release. The band is highlighted by an image of a bull (with a crown hovering over it). Just below that image is the text “JUAREZ”. The sides of the bands have images of mountains. The top and bottom of the band has black trim with a pale yellow-dotted pattern to it.

A straight cut was used to commence the cigar experience of the Juarez 4 3/4 x 52. Once the cap was removed, it was on to the pre-light draw. The cold draw delivered a mix of creamy chocolate, a slight dark fruit note, and subtle hints of floral. I considered this to be an excellent pre-light draw. At this point, it was time to light up the Juarez 4 3/4 x 52 and see what the smoking experience would have in store.

Later in the first third, some oak notes emerged in the forefront and fused nicely with the creamy texture present in the forefront. The chocolate notes settled in the background with the pepper, fruit, and floral notes.  As the Juarez moved through the second third, the creaminess began to subside while the pepper notes increased.

The last third of the Juarez saw some earthy notes surface with the oak in the forefront. The pepper notes were a close secondary note. At the same time, there was a reduction in overall sweetness as the chocolate and fruit sweetness was greatly diminished. Finally, there were still floral touches present. This is the way the Juarez 4 3/4 x 52 came to a close. The resulting nub was slightly soft to the touch and cool in temperature.

The burn of the Crowned Heads Juarez 4 3/4 x 52 had a slight curvature to it, but this was a cigar that didn’t require a significant amount of touch-ups, nor was in danger of meandering.  The resulting ash was silvery-gray with some darker spots mixed in. This wasn’t an overly firm burn, but it wasn’t a loose nor flaky burn either. The burn temperature remained ideal. This was a slightly slow-burning cigar (about 77 minutes average smoke time). Unless you consider the slower burn a negative, the slow burn rate didn’t have an adverse effect on the smoking experience. 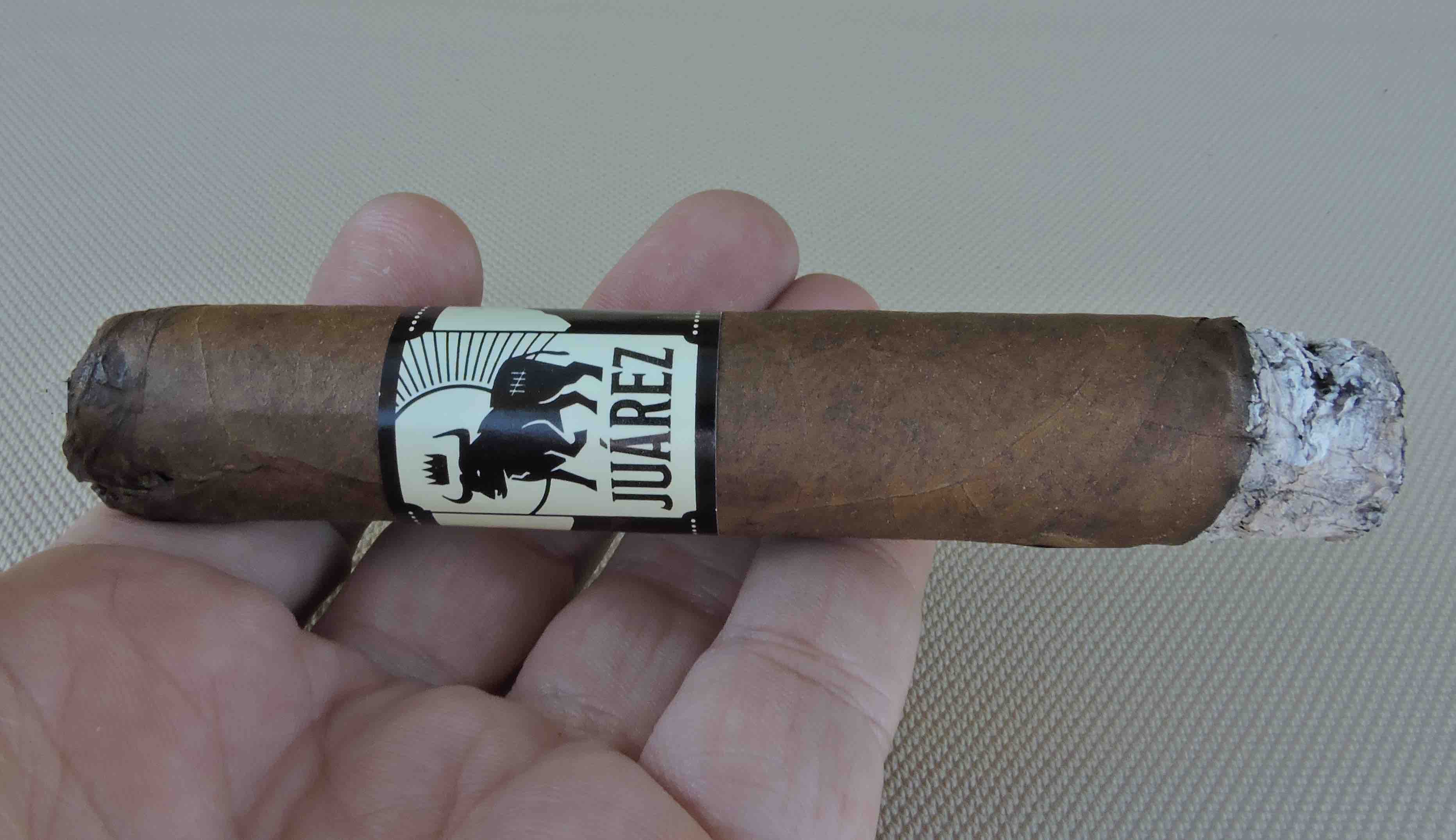 The draw to the Crowned Heads Juarez 4 3/4 x 52 was ideal. It had a nice balance between resistance and openness. At the same time, this was a cigar that produced a nice volume of smoke. It was also a cigar that was low maintenance to derive flavor from.

When it comes to both strength and body, the Crowned Heads Juarez 4 3/4 x 52 started out in the medium range of the spectrum. Toward the end of the second third, there was a slight uptick in the intensity levels of both attributes pushing the Juarez close to medium to full territory. Throughout the smoking, the strength and body balanced each other nicely with neither attribute overshadowing the other.

Over the years, Thompson Cigar has had many premium exclusive releases by leading manufacturers and brands. In most of these cases, both Thompson Cigar and the associated companies who have produced these offerings have done little to promote them. The lack of promotion of many of these releases is quite perplexing to someone like me in the media, because many of these have been excellent cigars and have had nice value. The Crowned Heads Juarez certainly belongs in the category of these excellent offering, and by a landslide, Crowned Heads has done the best job at promoting a Thompson release that I’ve seen in recent years. It’s an important point because the Juarez certainly deserves its place in the spotlight.

Flavor-wise, Crowned Heads Juarez is not your cookie-cutter Mexican San Andres offering. It’s quite different than many of the ones I’ve smoked, and that’s a positive. It definitely provided a smoother smoke than your typical San Andres offering, and brought a nice balance of sweetness and spice to the forefront. This was also the first cigar I’ve had from Tabacalera Pichardo, and it did impress me. Add a price point for the 4 3/4 x 52 that is under $6.00 (with a Thompson Cigar discount), and that’s a bigger bonus. This is a cigar I could recommend to the novice or seasoned cigar enthusiast. As for myself, this is a cigar I’d smoke again – and it’s worthy of having multiples in the humidor.