Cigar Review: Viaje Craft Series For the Love of the Leaf 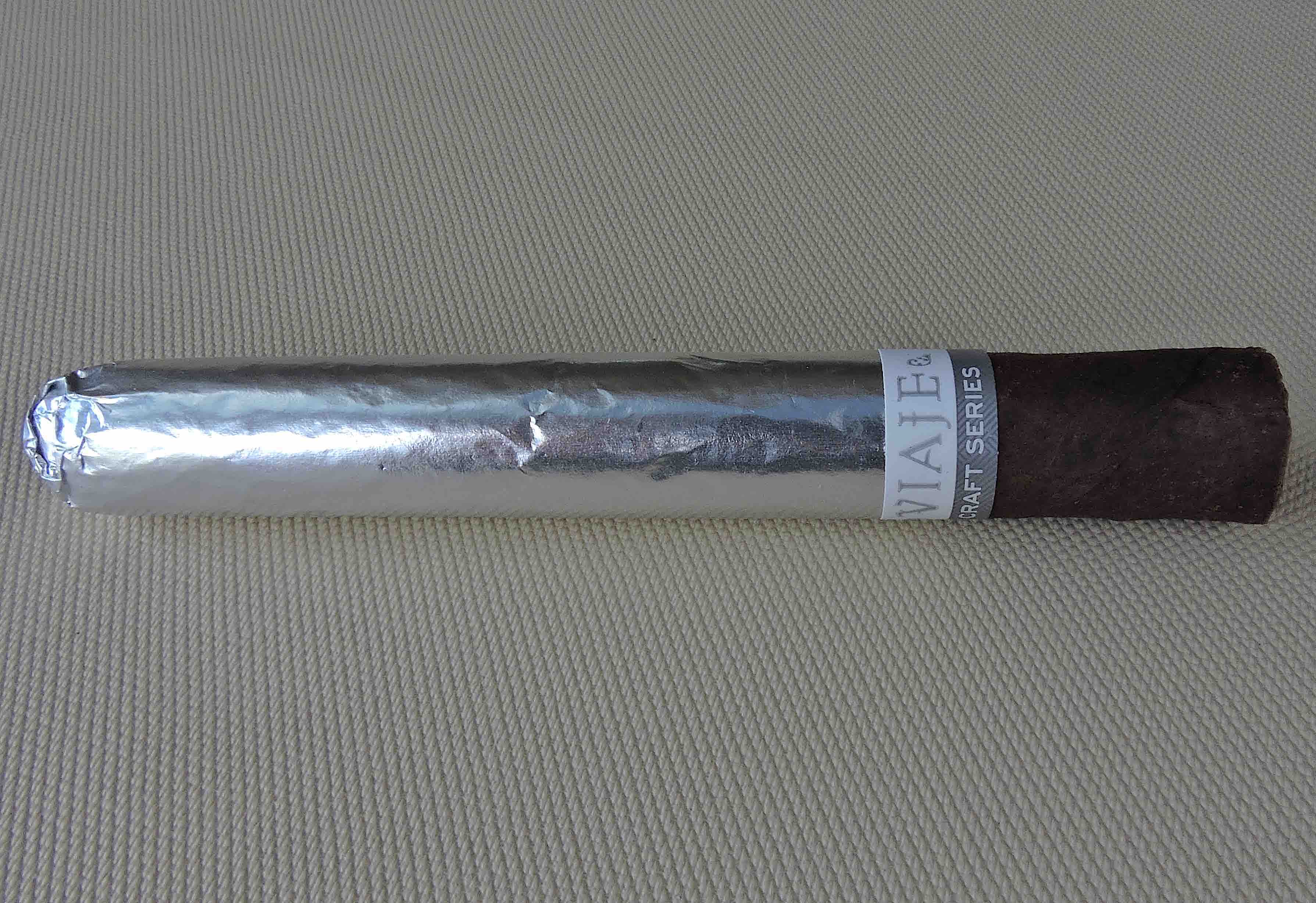 Viaje Craft Series – For the Love of the Leaf 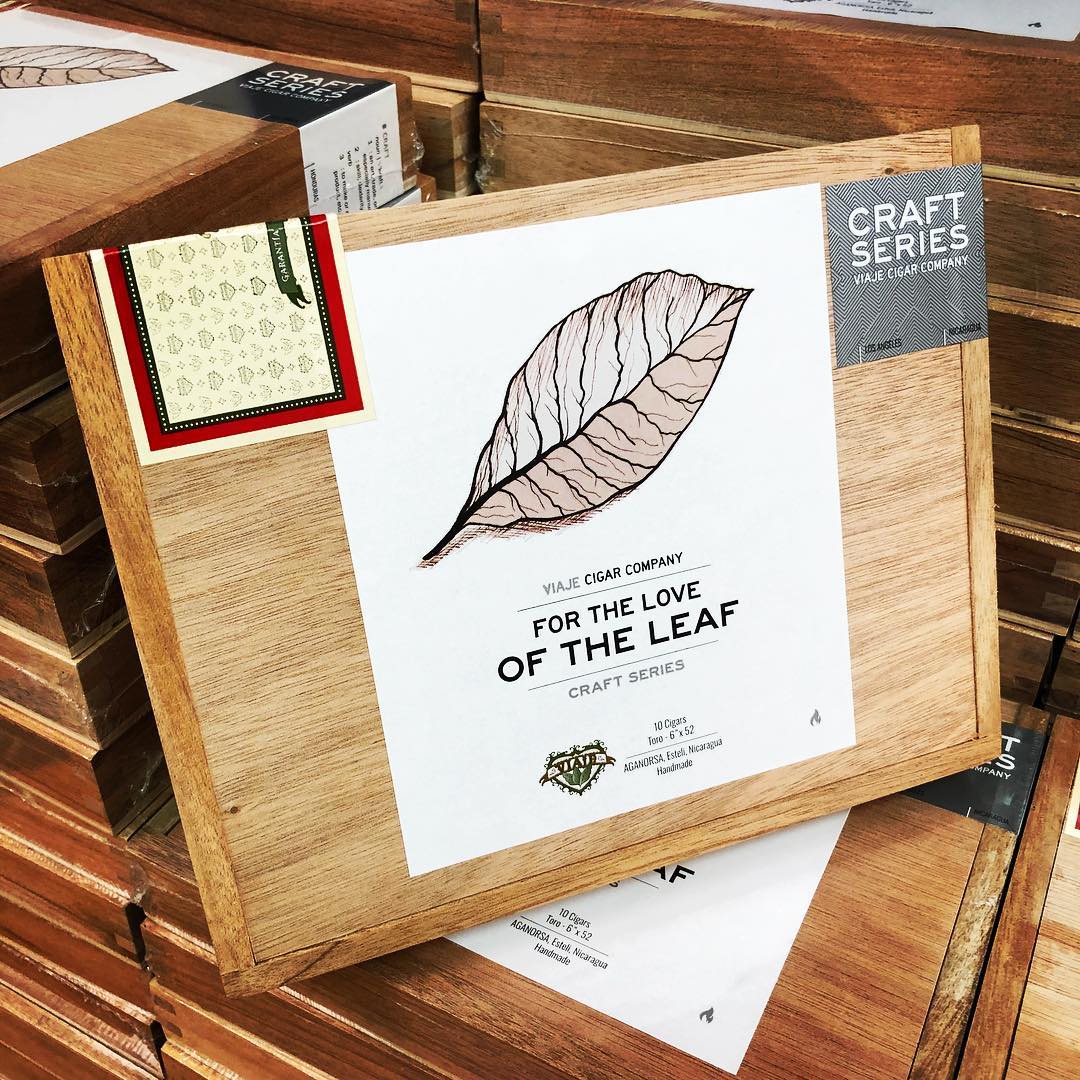 Packaging of the Viaje Craft Series – For the Love of the Leaf (Photo Credit: Viaje Cigars)

Over the years, Viaje has made cigars with many factories, but one can make the case that the closest relationship has been with the factories owned and operated by Aganorsa Leaf (Casa Fernandez). While the Craft Series is intended to showcase the tobaccos out of many factories, both Bales on Bales and For the Love of the Leaf are produced at Aganorsa Leaf’s Tabacos Valle de Jalapa S.A. (TABSA). Aganorsa Leaf is also world-renowned for the leaf it produces – something Viaje Cigars’ founder Andre Farkas has shown an affinity for and used for many of his releases – thus the name “For the Love of the Leaf” is appropriate.

Without further ado, let’s break down the Viaje Craft Series For the Love of the Leaf release and see what this cigar brings to the table. This is a cigar that has been aging in the Cigar Coop humidor for close to six months.

The maduro wrapper utilized on For the Love of the Leaf is sourced from the San Andres region of Mexico. The blend also features Nicaraguan tobaccos from the Aganorsa farms.

For the Love of the Leaf is available in one size – a 6 x 52 Toro. The cigars are presented in ten-count boxes. 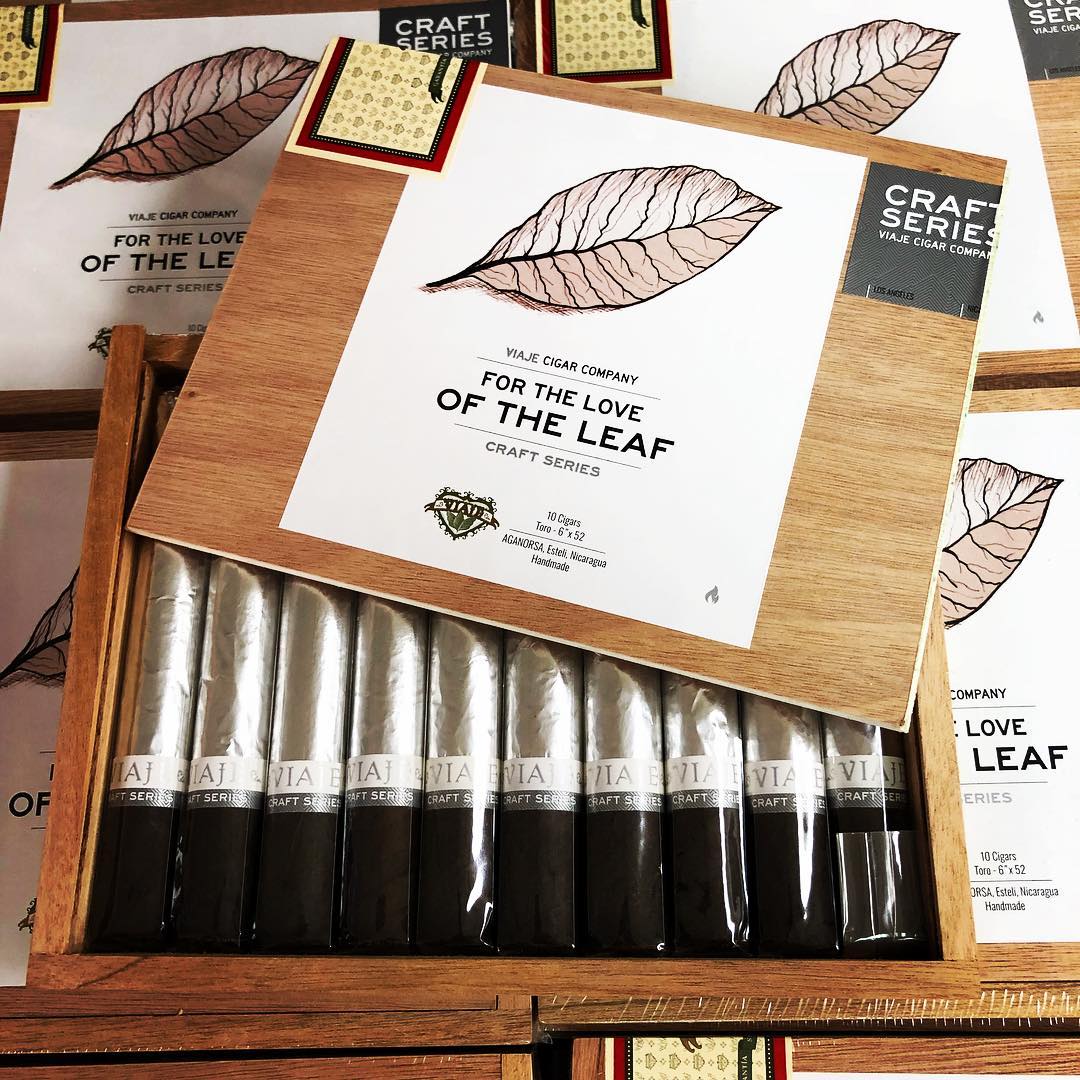 Packaging of the Viaje Craft Series – For the Love of the Leaf (Photo Credit: Viaje Cigars)

The San Andres wrapper of For the Love Leaf of the Leaf has a dark chocolate color. Upon closer examination, some mottling can be seen on the surface. There’s also a light coat of oil on the wrapper. The surface of the wrapper has some thin visible veins, and despite the dark color, there are still some visible wrapper seams. 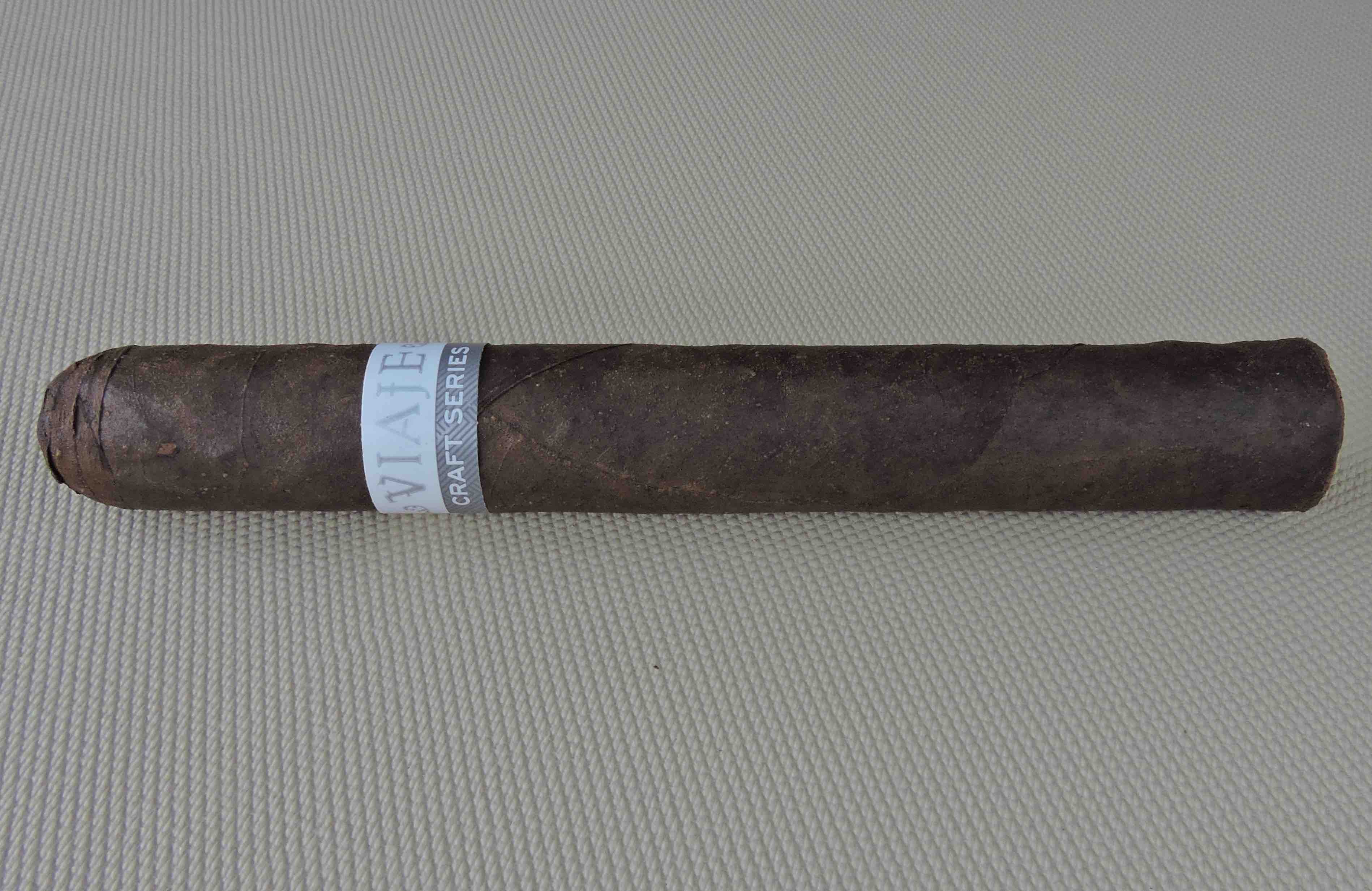 Viaje Craft Series – For the Love of the Leaf

The banding scheme of For the Love of the Leaf is pretty much identical to what was done for Bales on Bales. While it wasn’t the same size, the banding scheme seemed like a variant of the Bolivar Gold Medal. The Bolivar Gold Medal is famous for a foil sleeve almost 2/3 the way down the cigar as well as the placement of the cigar band just below the foil sleeve. For the Love of the Leaf doesn’t have a gold foil sleeve, but it does have a silver one. There is also a cigar band just below the sleeve. It has a thick white stripe with a silver stripe on the lower portion. On the white stripe is the “VIAJE” logo text in silver font. On the silver stripe is the text “CRAFT SERIES” in white font.

The cigar experience of For the Love of the Leaf commenced by removing the foil sleeve. This was followed by placing a straight cut to remove the cap and proceeding with the pre-light draw. The dry draw delivered a mix of chocolate, cedar, and pepper. I deem this a satisfactory pre-light draw. At this point, it was time to light up the Viaje Craft Series For the Love of the Leaf and see what the smoking phase would deliver.

For the Love of the Leaf kicked off with notes of earth, chocolate, wood, black pepper, and some “maduro sweetness” (which I coin as a fusion between dark cherry and natural tobacco). During the early stages, the chocolate and maduro sweetness emerged as the primary notes. The earth, wood, and black pepper settled in the background. There was an additional layer of cedar and black pepper present on the retro-hale.

At the start of the second third of the For the Love of the Leaf, the maduro sweetness took control as the primary note. The chocolate notes floated back and forth between the forefront and the background. The earth, wood, and pepper notes remained secondary. By the midway point, the pepper notes increased on both the tongue and retro-hale.  It was also at this point where the earth notes began to surface in the forefront. There was also an additional sweetness that emerged on the retro-hale.

The final third saw the maduro sweetness and earth grounded as the primary note. The pepper notes were more prominent than early on, but still were in a secondary role. Meanwhile, there was a significant decrease in the chocolate notes that had been present early.  Finally, there were still touches of cedar rounding out the flavor profile. This is the way For the Love of the Leaf came to a close. The resulting nub was slightly soft to the touch and cool in temperature.

At times there was a slight bit of meandering on the burn path of the Viaje Craft Series For the Love of the Leaf. For the most part, this was remedied by applying some touch-ups. The resulting ash had several shades of gray to it. This was an ash that was slightly on the looser side. Meanwhile, the burn rate and burn temperature were both ideal. 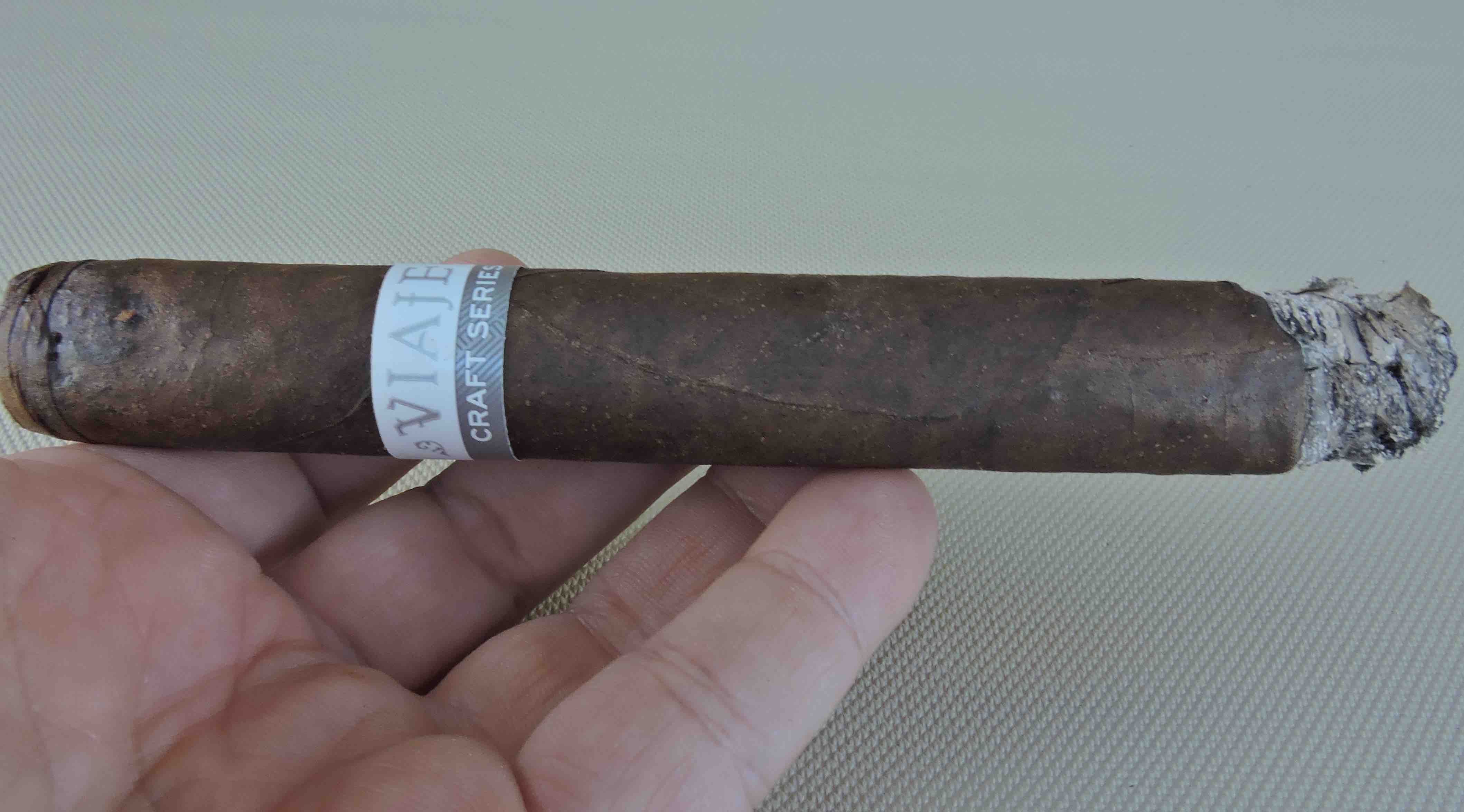 In terms of strength versus body, the edge went to the body – particularly in the second half

For the most part, I found For the Love of the Leaf to be a satisfying cigar, however, in a way it did fell short of my expectations. I was expecting something a little more given this incorporates some of TABSA’s best tobaccos. The flavors were good, but for the most part they were predictable and didn’t do much to stand out compared to other Viaje releases as well as other releases from that factory. It’s a cigar that still had enough going on where I would recommend it to the novice or experienced cigar enthusiast. As for myself, it’s still a cigar I’d buy and smoke again, but not sure I’d go further than that.