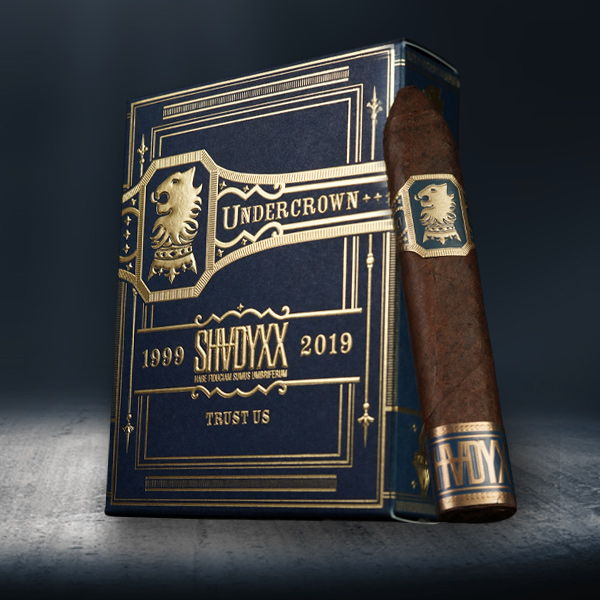 Back in 2014, the two parties collaborated for the Undercrown ShadyXV to commemorate Shady Records’ 15th anniversary. The cigar was released as a Detroit, Michigan regional exclusive and a 5 x 50 box-pressed belicoso based on the Undercrown Corona ¡Viva!. The ShadyXX returns with the same size and same blend, but some upgraded packaging. The blend features a San Andres Mexican Maduro wrapper, a Connecticut Stalk Cut Habano binder, and a combination of Brazilian Mata Fina and Nicaraguan fillers. The cigars will be packaged in ten-count petacas. Pricing is set at $104.00 per petaca. The ShadyXX will only be available to Drew Diplomat retailers.

In a press release, Jonathan Drew President and Founder of Drew Estate commented, “Eminem, Paul Rosenberg, and Shady Records have changed the world. It’s undeniable!! While selling 230 million records is impressive on its face, it’s the unique way that Shady has connected with so many of us “regular folk” that’s impacted me the greatest. Shady made it okay to be different, no matter how weird or how fucked up we might be. The conceptual space of Shady Records is connected to the Undercrown brand because UC is cut from a different cloth, and not afraid to admit it. THE Undercrown is not the king in this romantic cigar story. The Undercrown’s position is juxtaposed to the king, like a wildin out prince on some DE, homegrown shit. The UC don’t want to be king. He’s deep in the cut, robust, and got mad flavor. I love the connection to Shady Records and am very proud to celebrate 20 years with the dudes.”

Paul Rosenberg, Eminem’s long-time manager and Shady Records’ President, added, “I’m honored to team up with JD and Drew Estate again on our second collaboration resulting in the stellar ShadyXX. 20 years is a huge milestone, and I couldn’t think of a better way to reflect on the label’s legacy and celebrate our achievements than by lighting up another limited edition cigar that we can share with the world. This smoke is a superb, authentic blockbuster and just like one of our classic albums I expect it only to get better with time.”

The Undercrown ShadyXX is targeted to ship in August. The 2019 IPCPR Trade Show opens June 29th, 2019, in Las Vegas, Nevada.