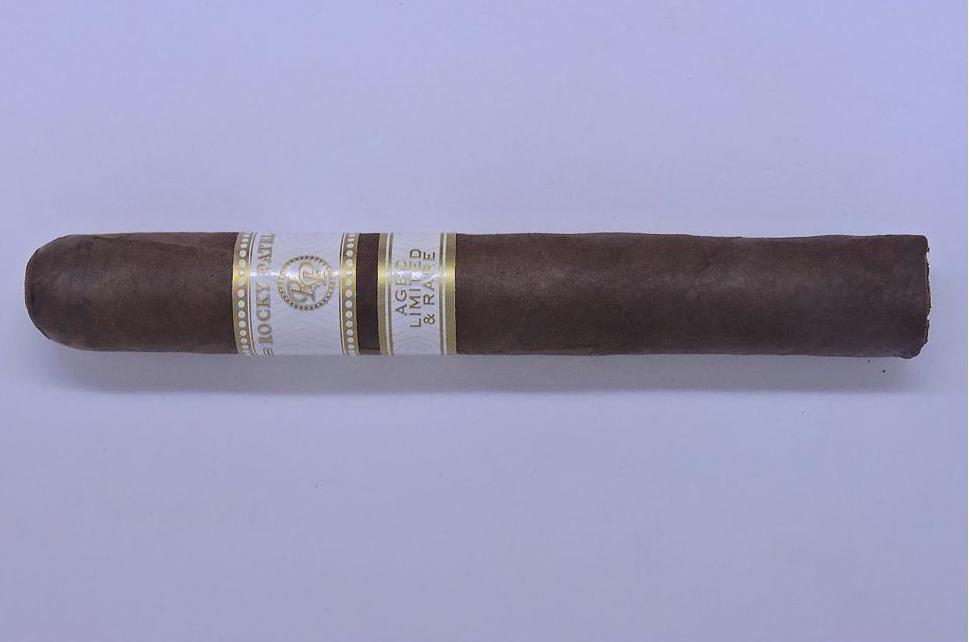 At the 2018 IPCPR Trade Show, Rocky Patel Premium Cigars (RPPC) launched a brand known as Aged Limited & Rare (or A.L.R. for short). This is a project that traces back to 2015. At the time RPPC founder Rocky Patel was working on the blend, he felt that the blend could develop further if the fully rolled cigars were set aside for aging. He decided to take a limited production of 100,000 cigars and set it aside in the TAVICUSA factory. Last year, the cigars were unveiled and subsequently shipped. Today we take a look at the Rocky Patel A.L.R. in the Toro size.

Without further ado, let’s break down the Rocky Patel A.L.R. Toro and see what this cigar brings to the table.

The blend for the Rocky Patel A.L.R. consists of a Habano wrapper over Nicaraguan binder and filler. As mentioned production is handled at the TAVICUSA factory.

The Rocky Patel A.L.R. is offered in three sizes. Each is presented in 20-count boxes. There were a total of 1,500 boxes per size produced. A surplus of 10,000 cigars is still in storage as a part of Rocky Patel’s personal inventory. 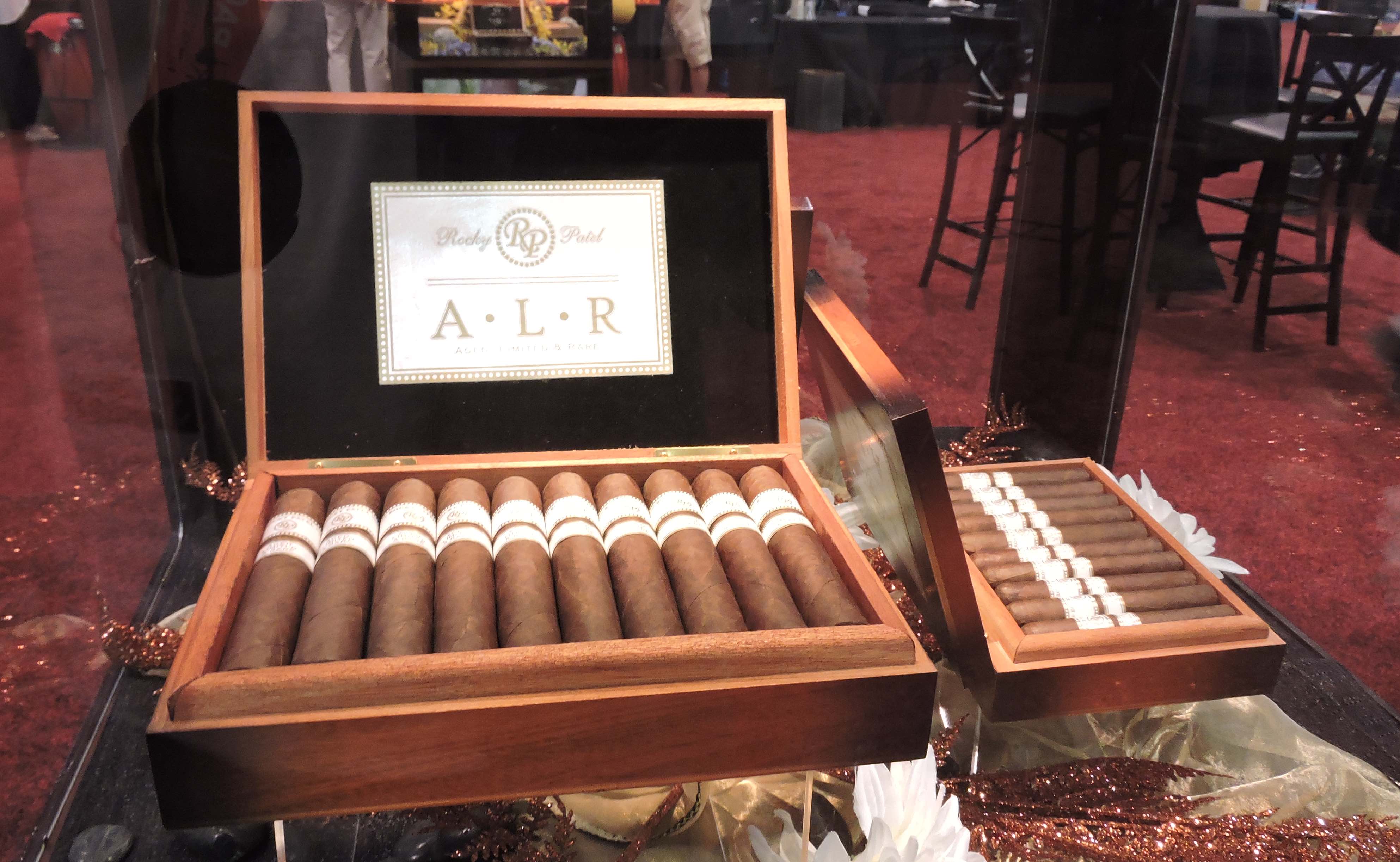 The Habano wrapper of the Rocky Patel A.L.R. Toro had a milk chocolate color with a light sheen of oil on it. Upon closer examination, some darker mottling could be seen on the wrapper. While the wrapper seams were well hidden, there were some prominent veins. The surface of the wrapper had a slightly bumpy texture to it.

There are two bands on the Rocky Patel A.L.R. Both bands are white with gold font.  The white background on both bands also has a watermark-like pattern in the background.  On the center of the primary band is the “RP” circular logo. Above the logo is the text “ROCKY PATEL”. There are gold and white adornments along the band’s trim. The secondary band rests just below the primary band. It is also white in color with gold font. The center of the band features the text “AGED LIMITED & RARE”. Gold trim is on the upper and lower portion of the band.

Prior to lighting up the Rocky Patel A.L.R. Toro, a straight cut was used to remove the cap. From that point, it was on to the pre-light phase The cold draw delivered a mix of leather, citrus, and a slight floral note. This wasn’t the most exciting pre-light draw, but since we don’t score the pre-light experience, there was no loss of points here. At this point, it was time to light up the Rocky Patel A.L.R. Toro and see what the smoking phase had in store.

The Rocky Patel A.L.R. Toro kicked off with notes of cocoa, lemon-citrus, cedar, and mixed pepper. Early on the cocoa and lemon notes moved into the forefront. The cedar and pepper settled into the background. These background notes were soon joined by notes of coffee bean. Meanwhile there was an additional layer of red pepper.

The last third didn’t see any major changes from the second third except for a slight increase in the cedar and pepper spices. This is how the Rocky Patel A.L.R. Toro came to a close. The resulting nub was slightly soft to the touch and cool in temperature.

The Rocky Patel A.L.R. Toro didn’t have much of a problem maintaining a straight burn path. The cigar had a slightly jagged line and did require some touch-ups. In the end, the touch-ups required were cosmetic. Meanwhile, the A.L.R. Toro had a light gray ash. This was an ash that wasn’t an overly firm ash, but far from loose and flakey. As for the burn rate and burn temperature, both were ideal. 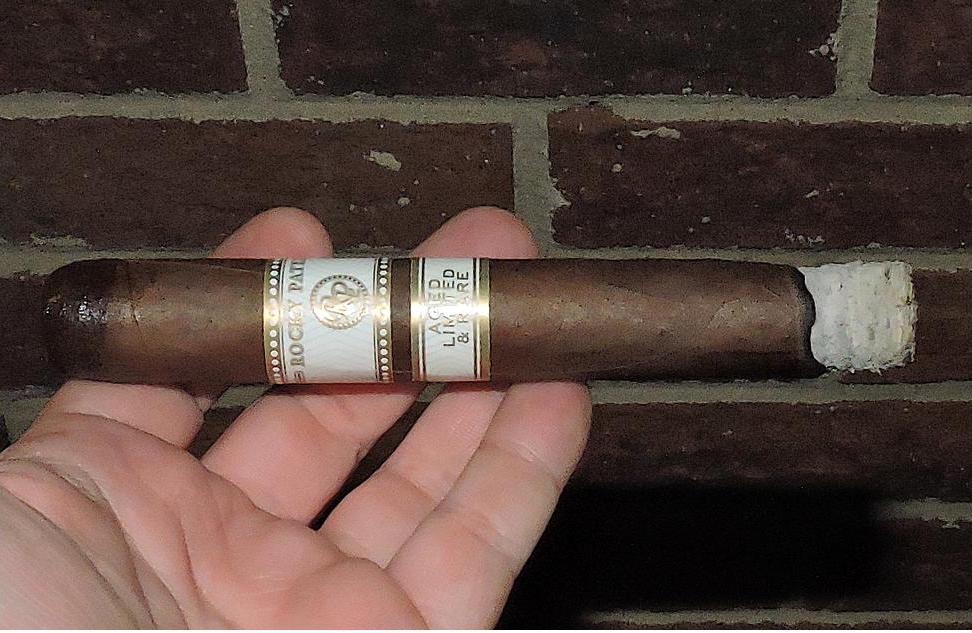 The Rocky Patel A.L.R. Toro had a draw that I would consider open, but not loose. This was a low maintenance cigar to derive flavor from.

The Rocky Patel A.L.R. Toro delivered a medium strength, medium-bodied experience. Along the way there was a slight increase in the intensity of both attributes, but in the end the cigar still remained in the medium range of the spectrum. In terms of strength versus body, the body had a slight edge from start to finish.

Whenever I hear about a project where rolled cigars are aged in the factory, I will usually scruntize the cigar and check it very closely for being young. The good news is the Rocky Patel A.L.R. Toro certainly passes the test in this area as the flavors delivered show that the cigar has some age. In terms of the flavors delivered, I did find the A.L.R. Toro to satisfy. What the cigar lacked was a “wow” factor. The A.L.R. Toro carries a price point of $14.00. It’s not an inexpensive cigar and that most likely reflects the fact that has been sitting in the aging room for three years. However, I’d want more from a $14.00 than I got from this one. In the end, I could see this profile working for a wide range of cigar enthusiasts, but it’s one I’d recommend trying a sample first.