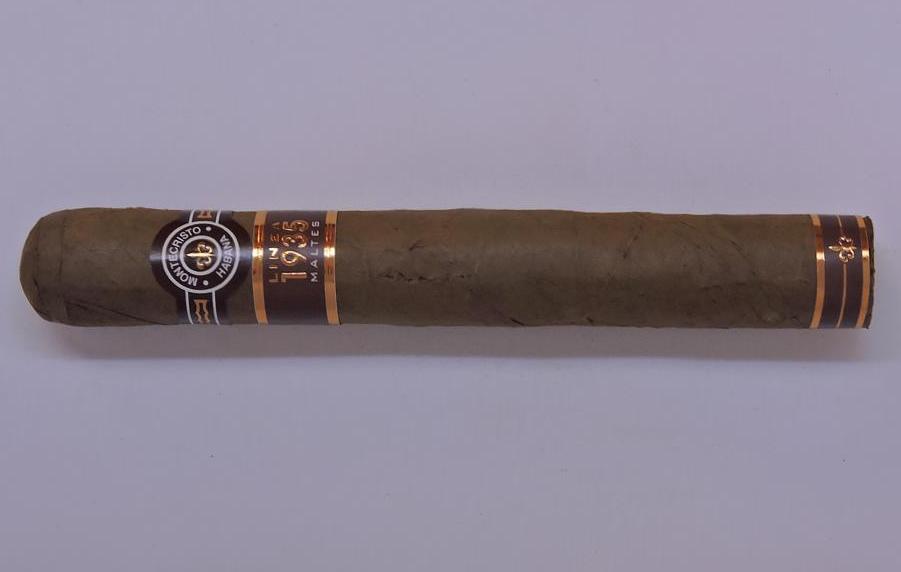 Montecristo traces its roots back to 1935 when Alonso Menendez and Jose Manuel Pepe Garcia started a brand in Cuba inspired by the Alexandre Dumas novel, The Count of Montecristo. After Menendez and Garcia established the Montecristo brand in Cuba, things took a turn following the Cuban Revolution of 1959. The revolution led to the nationalization of the Cuban cigar industry. The nationalization would include the Montecristo brand making it now a part of the Habanos S.A. portfolio. Following the Cuban revolution, Menendez and Garcia fled to the Canary Islands and eventually made their way to the Dominican Republic where they re-established the brand that today is a part of the Altadis U.S.A. portfolio.

At the time the Montecristo Línea 1935 was announced, it was a cigar that was positioned as “a full strength flavour blend for the very first time.”

Without further ado, let’s break down the Montecristo Línea 1935 Maltés and see what this cigar brings to the table.

The Montecristo Línea 1935 is available in three sizes – each packaged in 20-count boxes.

One note on the Leyenda size. It ties back to the Montecristo 80 Aniversario in that is uses the same vitola size as that cigar.

The wrapper of the Montecristo Línea 1935 Maltés featured a caramel color wrapper. There wasn’t much in the way of oil. There were a couple of nicks in each of the two samples I smoked, but this didn’t prove to lead to any construction problems. In addition, there were visible veins and visible seams on the surface of the wrapper.

There are three bands on the Montecristo Línna 1935. The primary band is an embellished version of the signature brown label Montecristo band. It features a copper fleur-de-lis in the center on a brown field. There is a brown ring with white trim surrounding the center. On that ring is the text “MONTECRISTO” and “HABANA” in white font. The remainder of the band has some copper accents on the sides.

The secondary band is brown with copper trim across the top and bottom. The text “LINEA 1935” appears on the band with “1935” in a larger font on the center. The lower portion of the band features the name of the vitola in white font. In this case, it is “MALTÉS” in white font.

A third band surrounds the footer. It is brown with copper trim. There is a copper fleur-de-lis on the band along with some copper adornments.

A straight cut was used to remove the cap of the Montecristo Línea 1935 Maltés. Once the cap was removed, it was on to the pre-light draw experience. The cold draw delivered notes of earth and hay. Overall this was not a pre-light draw that I found very interesting, nor very good. Since the pre-light draw is not factored into the numerical score or assessment rating, there was no loss of points here. At this point, it was time to remove the footer band from the Montecristo Línea 1935 Maltés, light up the cigar and see what the smoking experience would have in store.

The Montecristo Línea 1935 Maltés starts out with notes of earth and hay, but things immediately got more interesting when notes of citrus and black pepper emerged. The earth and citrus notes moved into the forefront. The earth note actually had an underlying sweetness that complemented the sweetness from the citrus. Meanwhile the retro-hale delivered an additional layer of black pepper with some citrus sweetness mixed in.

As the Montecristo Línea 1935 Maltés moved into the second third, the sweetness in the forefront became a little more prominent. The earthy sweetness from the first half morphed into a caramel-like sweetness. This caramel sweetness along with the earth and citrus remained in the forefront until just past the midway point where it subsided. The latter part of the second third saw the citrus and earth remain primary with the hay, black pepper, and caramel secondary. The sweetness present in the first half diminished.

The last third saw some grass notes join the earth and citrus in the forefront. The hay, black pepper, and caramel remained in the background until the end. As the cigar experience came to a close, the Montecristo Línea 1935 Maltés had a soft, cool nub.

The Montecristo Línea 1935 Maltés scored very nicely when it came to the burn. The cigar maintained a straight burn path and straight burn line from start to finish. The resulting ash was a darker gray. This was an ash that was on the firmer side. Meanwhile, the burn rate and burn temperature were both ideal. 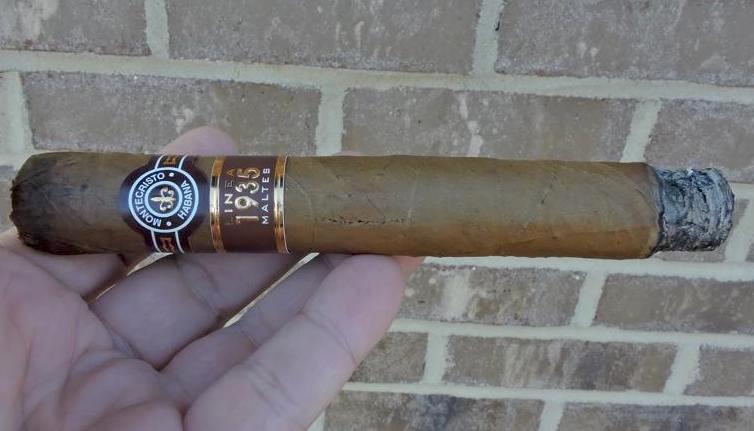 Burn of the Montecristo Línea 1935 Maltés

In terms of draw, the Montecristo Línea 1935 Maltés was right where I wanted it to be. It had a touch of resistance – which is something that I like. A the same time, this is a cigar that produced an ample amount of smoke.

While Habanos S.A. positioned this cigar as “full strength flavour,” the bottom line is that this really wasn’t a bold cigar.

In terms of strength versus body, the body had a slight edge throughout the smoking experience.

I’ve seen pricing of the Montecristo Línea 1935 Maltés range between anywhere from $19.00 to $50.00 depending on the country and taxes. While I paid, £35.95 GBP ($46.61 USD), it can be found for a lower price. Regardless, this is not going to be an inexpensive purchase – even if you are lucky enough to find it on the lower part of the price range. I had higher hopes for this cigar. While it’s still a good cigar, it’s not one that is going to be the second coming of the Cohiba Behike. It’s one that if you are lucky enough to try a sample of, I would do it before investing in this purchase.