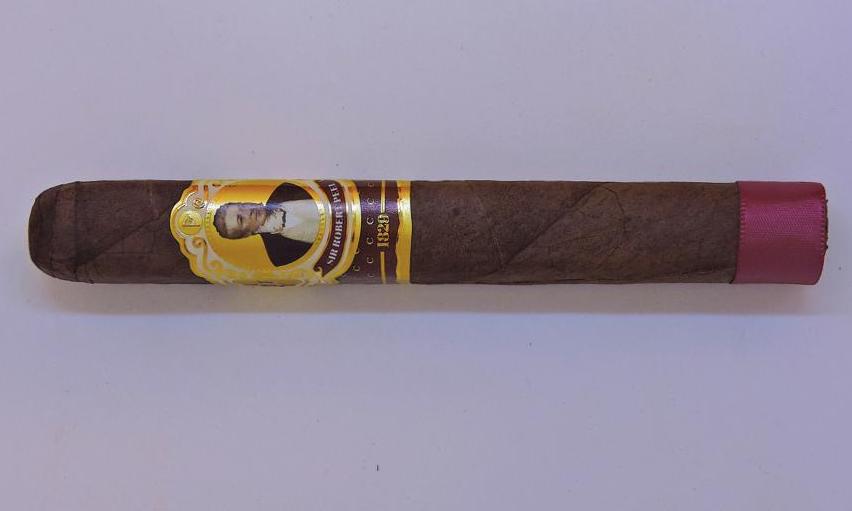 One constant of Cubariqueño is the company’s homage to law enforcement. This ties into the fact that co-founders Juan Cancel and Bill Ives have served in that field. The name Sir Robert Peel continues that tradition. Sir Robert Peel is considered to be the father of the modern-day police force. It was in 1829 when Peel established the London Metropolitan Police Force. 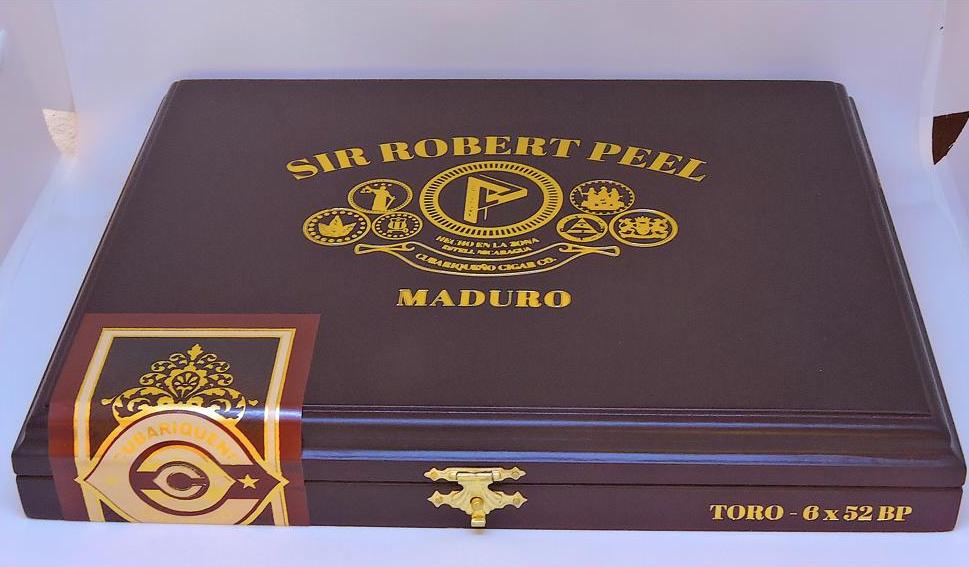 Without further ado, let’s break down the Protocol Sir Robert Peel Maduro and see what this cigar brings to the table.

When it comes to the Protocol Sir Robert Peel Maduro, this cigar uses a Broadleaf wrapper from Pennsylvania. It’s the first Broadleaf release to be added into the Cubariqueño portfolio. The remainder of the blend consists of Nicaraguan tobaccos. As with all Cubariqueño cigars, production is handled at Erik Espinosa’s La Zona factory in Estelí, Nicaragua.

The other blend in the line, the Protocol Sir Robert Peel Natural features an Ecuadorian Habanos Rosado wrapper over Nicaraguan binder and filler and is also produced at the La Zona factory.

Both the Protocol Sir Robert Peel  Maduro and Natural offerings were launched in one size – a 6 x 52 Box Pressed Toro. Each is packaged in elegant 10-count boxes. 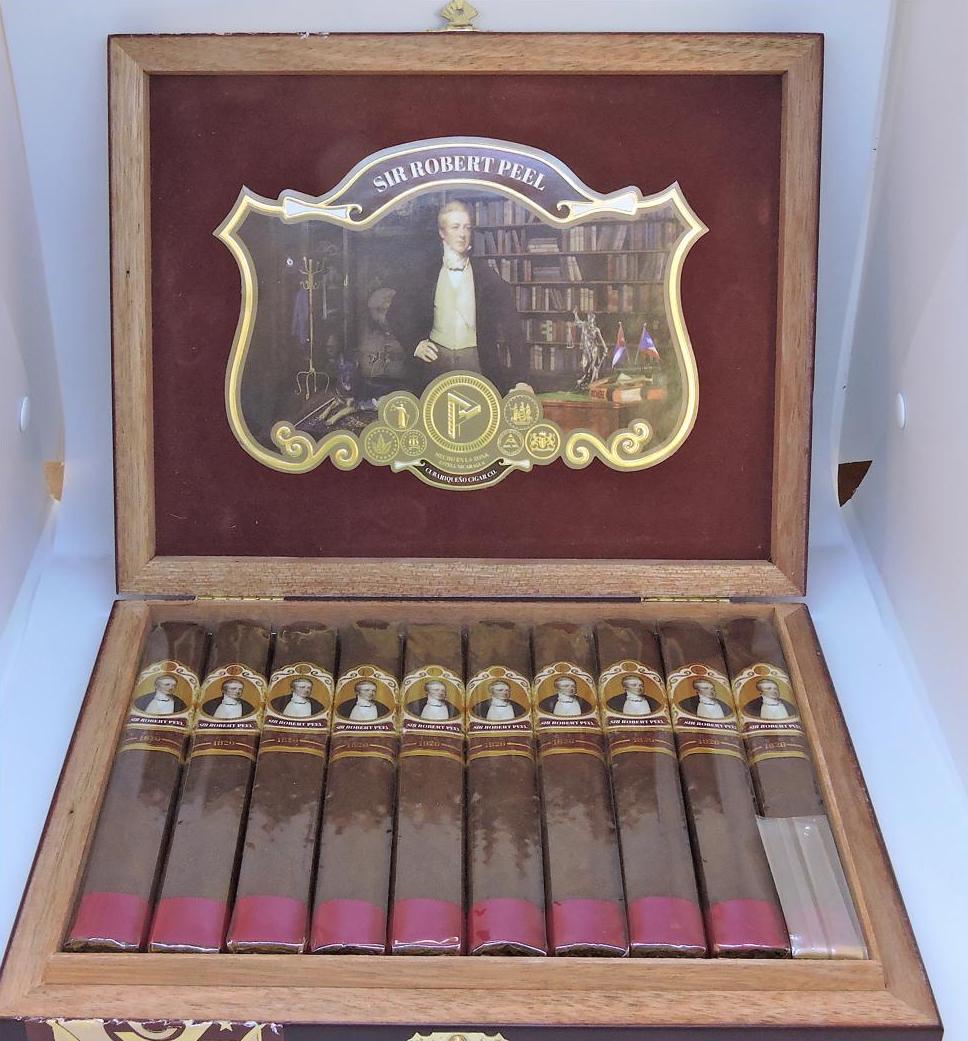 The Pennsylvania wrapper of the Protocol Sir Robert Peel Maduro had a roasted coffee bean color with a slightly darker Colorado tint. There was a light sheen of oil on it. The surface of the wrapper was also void of any significant major visible veins. While there were several visible wrapper seams, this was a wrapper that still had a relatively smooth surface. The box-press itself was more of a square press. 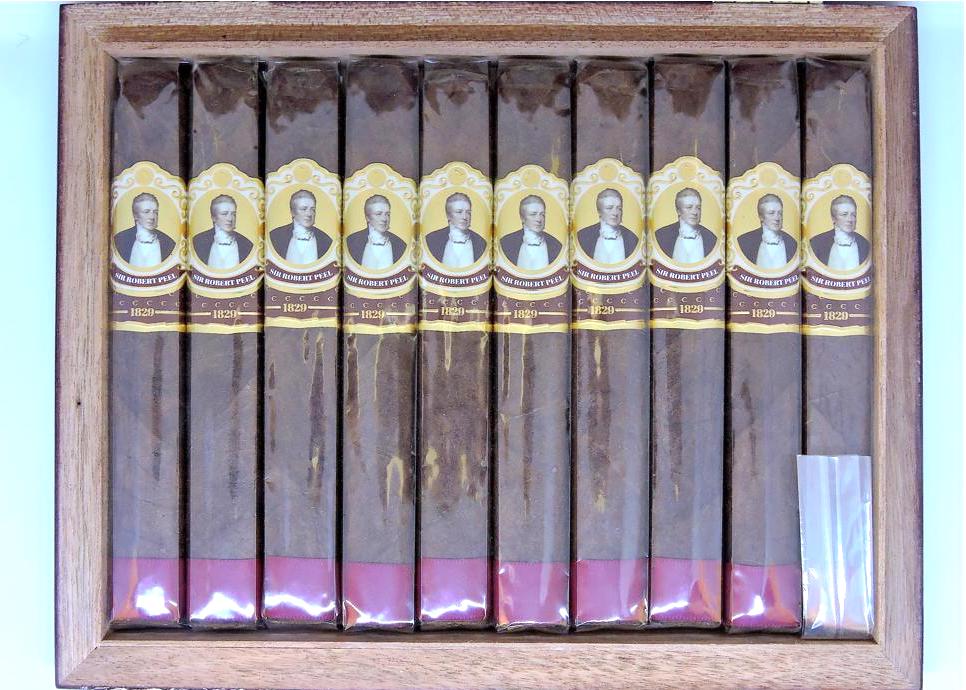 Close Up of the Protocol Sir Robert Peel Maduro

There are two bands on the Sir Robert Peel Maduro. The primary band has a gold, maroon, and white color scheme. On the center of the band is a portrait of Sir Robert Peel. Just under the picture is a maroon ribbon-like design with the text “SIR ROBERT PEEL” in white font. Surrounding the portrait is a shield and a series of gold medallions. There are images on each of the gold medallions that have significance to Cubariqueño and law enforcement in general. Co-owner Juan Cancel has referred to these as “Easter eggs.” To the left of the portrait is the text “ESTELI NICARAGUA” in white font on a maroon background while to the right is the text “HECHO EN LA ZONA” – also in white font on a maroon background. 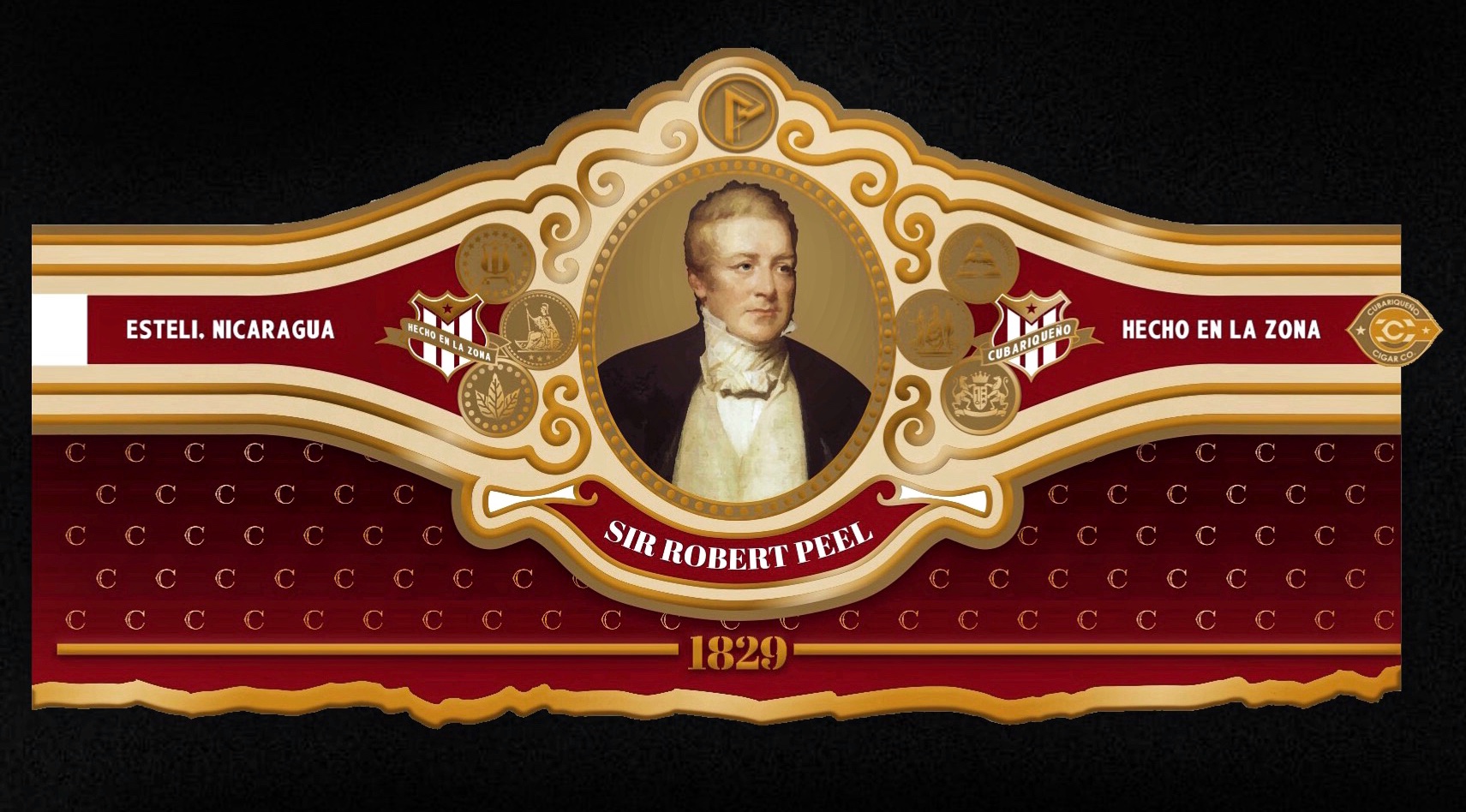 Prior to lighting up the Protocol Sir Robert Peel Maduro, a straight cut was used to commence the cigar experience and remove the cap. It was then on to the pre-light draw experience. The dry draw had notes of mocha (a fusion of coffee and chocolate) and some earth notes. I considered this a satisfactory pre-light draw experience. Next up was to remove the ribbon from the footer, light up the Protocol Sir Robert Peel Maduro and move on to the smoking phase.

The Protocol Sir Robert Peel Maduro kicked off with more notes of mocha as well as notes of black pepper, earth, and citrus. Early on the mocha and pepper notes moved into the forefront. The earth and citrus notes settled in the background. By the middle of the first third, the pepper subsided into the background leaving the mocha as the sole primary note. Meanwhile, there was an extra layer of pepper present on the retro-hale.

By the last third of the Protocol Sir Robert Peel Maduro, the pepper notes rejoined the coffee notes in the background. The mineral notes were close secondary notes with some earth, chocolate, and citrus notes still present from time to time. This is the way the cigar experience of the Sir Robert Peel Maduro came to a close. The resulting nub was soft to the touch and warm in temperature.

While there was a slight amount of curvature on the burn line, for the most part, the Protocol Sir Robert Peel Maduro maintained a straight burn path. The resulting ash was silver gray with some darker speckles present. This was an ash that was on the firmer side. The burn rate was ideal. The burn temperature remained ideal, but toward the very end got slightly warmer than I prefer. 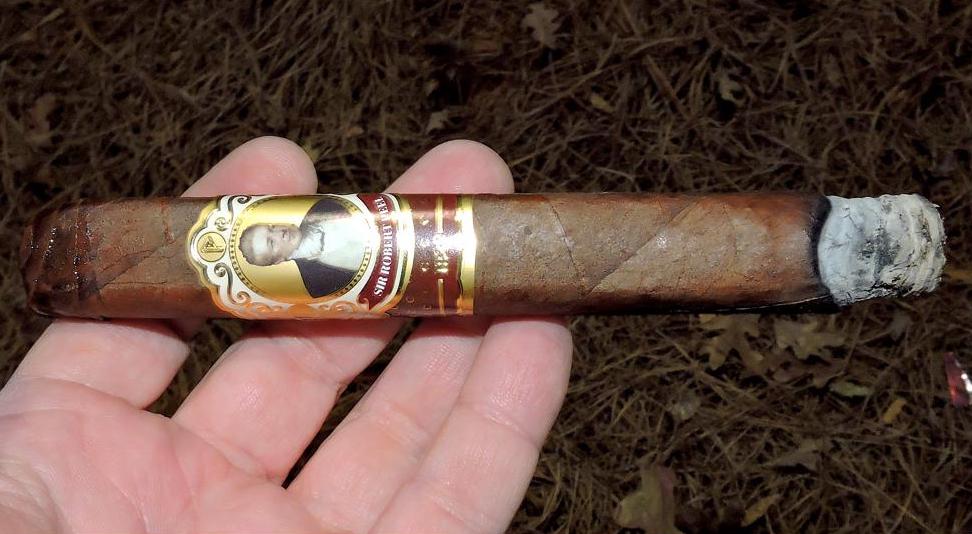 While the draw to the Protocol Sir Robert Maduro wasn’t loose, it was definitely on the open side – and it was a little more open than I prefer. This was a draw that needed to be worked carefully in order to control the combustion rate of the cigar – and even then the burn temperature still was a little bit warmer than I prefer at the end of a smoking experience.

The first third of the Protocol Sir Robert Peel Maduro is as good a cigar as I have had out of the La Zona factory. As the cigar experience progressed, I found the overall flavor profile to get more ordinary. This isn’t a knock on this cigar, but it reflects how good the first third was. The open draw of this cigar didn’t help either – and I think that might have contributed to the slight decrease in performance.

Still, this is a very nice cigar. From a personal standpoint, I’m not the biggest fan of Pennsylvania Broadleaf wrapper but this is a nice example of a cigar using this wrapper. Given this is a bolder cigar, I’d recommend to a more seasoned cigar enthusiast. As for myself, this is a cigar I would buy and smoke again.