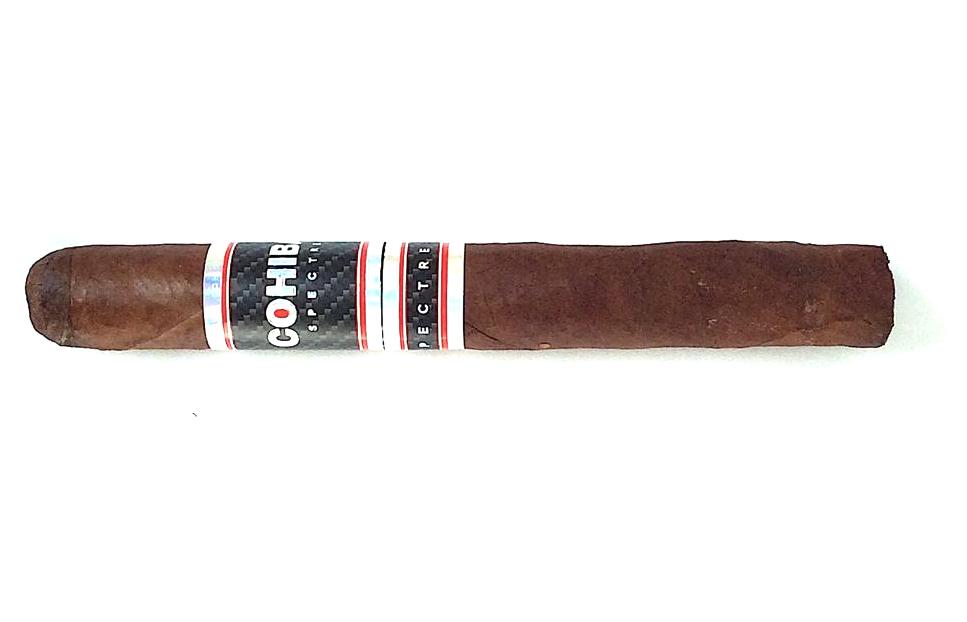 Over the past three years, General Cigar Company has been putting an investment in its Cohiba brand. While Cohiba has never really been a dormant brand, these past three years have seen a combination of regular production and limited releases added into the Cohiba portfolio. It was also three years ago that General Cigar unveiled a release called Cohiba Blue which was meant to provide a more affordable price point into the brand. Cohiba Blue was a bit of an anomaly for Cohiba in that it was more value-priced than the rest of the Cohiba brand. In 2018, General would go in the opposite direction, releasing the Cohiba Spectre, a cigar that would be its most premium offering to date at $90.00 per cigar. The original Cohiba Spectre proved to be a cigar that did well for the brand and as a result, the company would release another Cohiba Spectre in 2019 with the Cohiba Spectre CS19. Like its predecessor, it would carry a price point of $90.00 and its the CS19 release that we take a look at today.

The original Cohiba Spectre and the Cohiba Spectre CS19 are two different cigars in terms of blend and vitola. There are three common denominators with both releases. First is the $90 price point; second is the fact that both feature high end (but different) packaging); and third, the blends contain Nicaraguan tobaccos aged in sherry cask barrels. 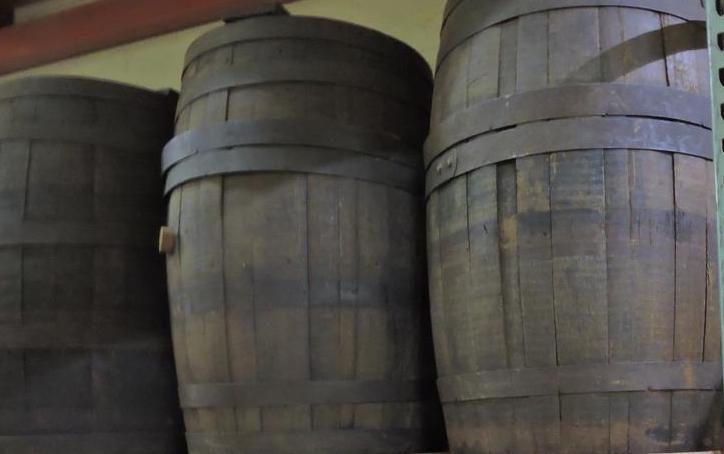 Without further ado, let’s break down the Cohiba Spectre CS19 and see what this cigar brings to the table.

The Cohiba Spectre 2019 is highlighted by a deeply fermented high priming Nicaragua Jalapa wrapper that underwent an additional fermentation process for six months. A total of eight barrels of wrapper tobacco were set aside for the Cohiba Spectre. The remainder of the blend consists of a Connecticut Broadleaf binder and fillers consisting of Brazilian Mata Fina and Nicaraguan tobaccos. The Nicaraguan tobaccos originate from the Estelí and Jalapa regions . The Nicaraguan tobaccos underwent a special finishing process in Spanish Sherry Cask barrels. According to General each leaf in the Cohiba Spectre CS-19 has been aged four to sixteen years. As mentioned, the CS19 is a completely different blend than the original 2018 release.

The cigars were crafted by a single pair: roller Xirolma Céspedes and buncher Ruben Dario Perez Peña. General Cigar said the pair has a total of five decades of experience. As for the blend, it was developed by Jhnoys Diaz at General Cigar Dominicana. 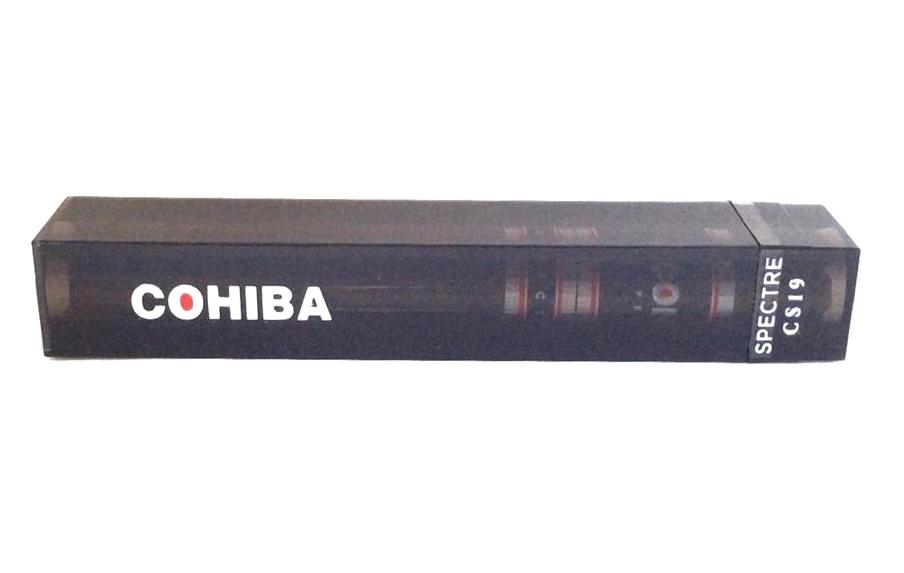 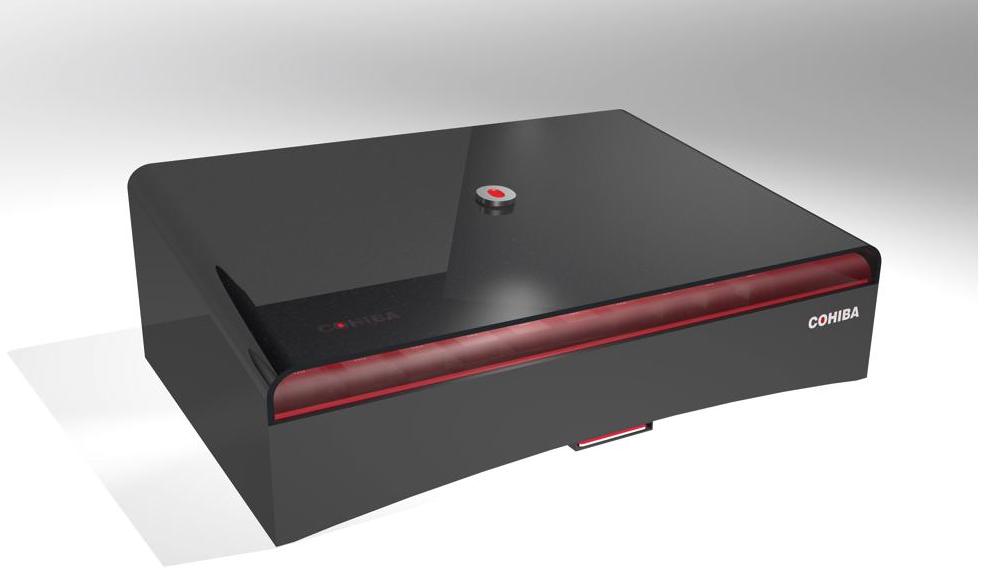 The Nicaraguan Jalapa wrapper of the Cohiba Spectre CS19 had a dark cinnamon color to it. There was a light coating of oil on it. This wasn’t a smooth wrapper as it had some visible veins and a bumpy surface. The darker color of the wrapper did a good job of hiding the wrapper seams.

There are two bands of the Cohiba Spectre CS19. The primary band is black with a gray design pattern giving it almost a 3D effect. The band has a trim consisting of red and white pinstripes along with a thick holographic stripe along the top and bottom. On the holographic trim is the text “Cohiba Spectre” on it. The center of the band has the text “COHIBA” and “SPECTRE” in silver font along with the signature Cohiba red dot on the “COHIBA” name. On the far left of the band is the signature of Jhnoys Diaz along with the title “MASTER BLENDER” – both in gold font in landscape mode. The right side has a black diamond with gold trim with the text “AGED IN TERCIOS” and “BALES” – also arranged in landscape mode. (Note: While the original Cohiba Spectre incorporated aged tobaccos in tercios, there has been no reference we have seen disclosed on the CS19).

The first step to smoking the Cohiba Spectre CS-19 was to remove the cigar from the tube. The tube is hollowed out to fit the CS19 cigar. It is a bit of a snug fit and pulling out one of the cigars I smoked resulted in the bands remaining in the tube. 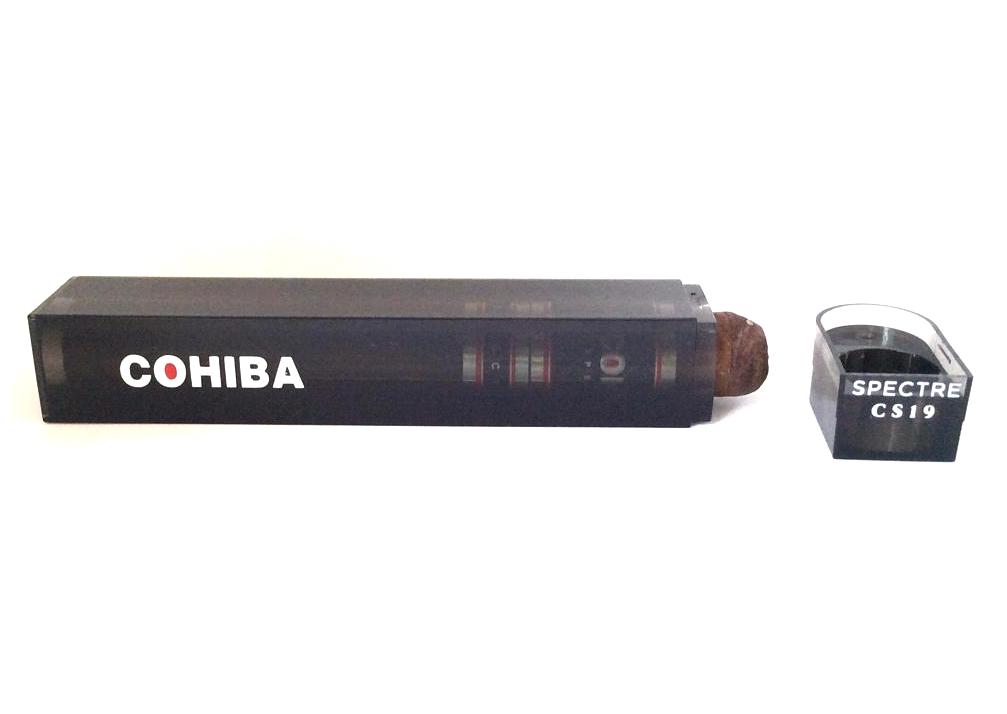 Once the CS19 cigar was removed, it was on to placing a straight cut in the cigar and commencing the pre-light draw. The dry draw left indications that the cigar had a sweetened tip as it delivered notes of sweet orange cream and leather. The sweetness was not overpowering and it resulted in an excellent pre-light draw. At this point, it was time to light up the Cohiba CS19 and see what the smoking phase would have in store.

The smoking experience of the Cohiba Spectre CS19 started out with notes of natural tobacco, orange, mixed pepper, and baker’s spice. Early on the natural tobacco notes moved into the forefront. As the cigar moved through the first third, notes of orange rind accompanied the orange sweetness in the background. Meanwhile there was an additional layer of mixed pepper on the retro-hale.

The last third saw the natural tobacco notes take on some slight bitter qualities, but it was not overwhelming on the palate. The pepper notes increased slightly in intensity. The baker’s spice diminished and by this point, the orange-flavored components dissipated. This is the way the Cohiba Spectre CS19 came to a close. The resulting nub was cool in temperature and slightly soft to the touch.

The burn of the Cohiba Spectre CS19 had a slight amount of unevenness on the burn line. This was remedied with some touch-ups, and for the most part the CS19 maintained a straight burn path. The resulting ash was light gray with some darker speckling mixed it. This wasn’t an overly firm ash, but it was not a loose nor flaky ash either. The burn rate and burn temperature were both ideal. 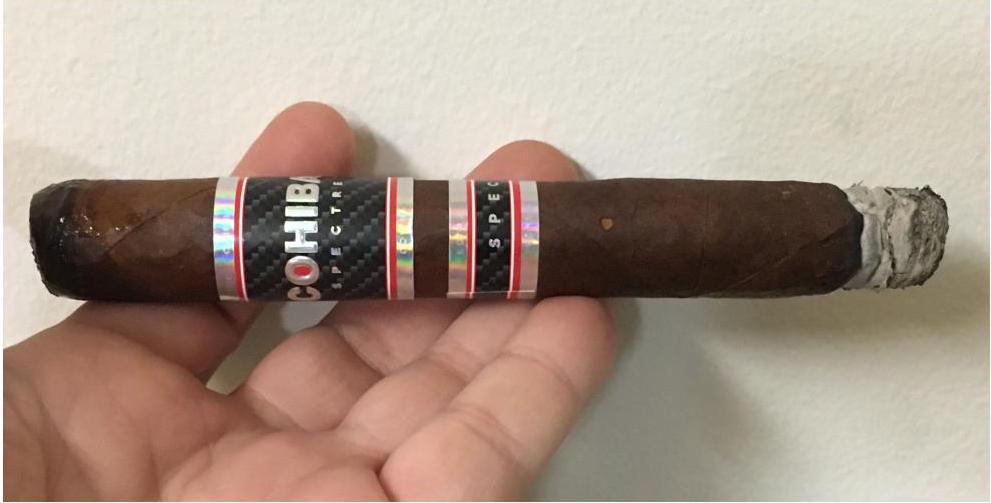 The Cohiba Spectre CS19 performed extremely well when it came to the draw. There was a touch of resistance on the draw – which is something that I like. At the same time, this was a cigar that delivered a low maintenance experience in terms of deriving flavor.

In terms of strength, the Cohiba CS 19 is a cigar that is going to build up gradually in intensity. The opening draws are in the mild to medium range before progressing to medium by the middle of the first third. The increase continues gradually and by the last third, the CS19 moved into medium to full territory.

When looking at strength versus body of the CS19, the body maintained a slight edge throughout the smoking experience.

In our numerical scores, we do not factor in price, so taking out the $90.00 price point, the Cohiba Spectre CS19  is an excellent cigar. It’s a cigar that definitely feels the influence of the aged tobacco in the sherry cask barrels, but it doesn’t overpower the blend. This allows the natural tobacco notes to shine.  I also like how this cigar builds up in intensity and boldness along the way. Now the question becomes, is this enough to say the cigar is worth $90.00? When you start to get past the $30.00 point, it’s quite hard to justify a cigar at that cost. This is where the value-rating comes in. While I couldn’t justify $900.00 to buy a box of cigars, I can say as a “luxury item” the Cohiba Spectre CS19 is a very good product. It’s certainly one I would recommend to a seasoned cigar enthusiast and certainly wouldn’t discourage a novice. In the end, this cigar still delivers enough in merit to warrant a “buy” recommendation and for me to smoke it again.