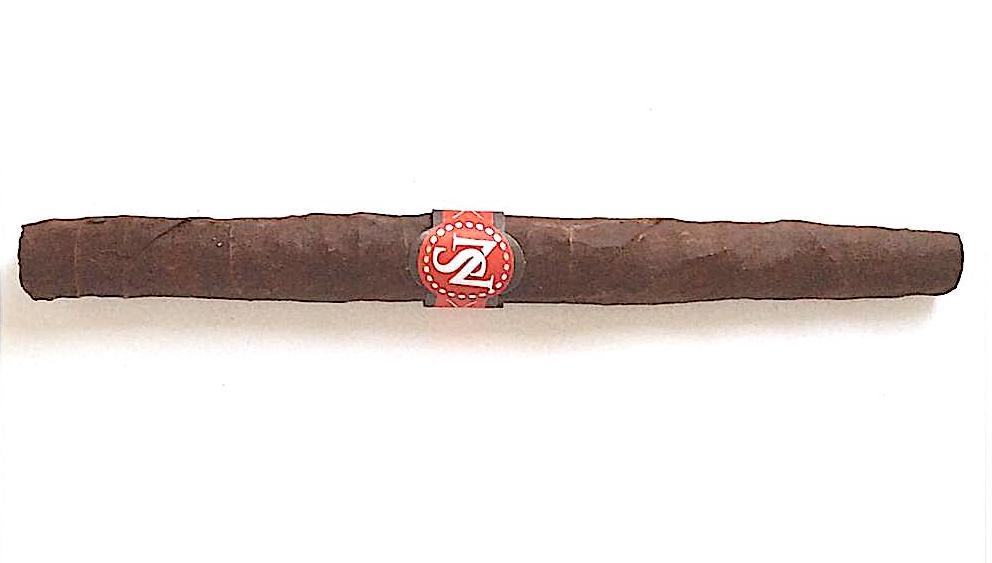 While you might not think about it, one of the largest and oldest cigar companies in the world comes out of the country of Italy – and it’s Toscano Cigars. The company celebrated its 200th anniversary in business in 2018.  Toscano has certainly been a popular brand in Italy and Europe for many years. While no stranger to the U.S. market, the company has been seeing a push in the U.S. market thanks to a distribution agreement that Miami Cigar and Company is handling. There are two things that Toscano Cigars are known for – first its use of fire-cured tobacco and second, its signature conical perfecto shape. What many people might not realize is that historically Toscano Cigars are not rolled with a binder. This is not the case with the Toscano Stilnovo as it becomes the brand’s first cigar to utilize a binder. Today we take a closer look at the Toscano Stilnovo.

Toscano Stilnovo was introduced at the 2019 IPCPR Trade Show in Las Vegas. The name Stilnovo is derived from the name “Dolce Stil Novo” and was a new style of writing that was spearheaded by Dante Alighieri. Alighieri was an Italian poet from the 13th century. It’s also an appropriate name for Toscano, as it involves a different technique than the company has used in order to produce this cigar.

Without further ado, let’s break down the Toscano Stilnovo and see what this cigar brings to the table.

Long before it became trendy, Toscano was well known for working with Kentucky Tobacco, including incorporating the use of fire-cured leaf in its blends. The company uses a unique fermentation process. As a result of this process, Toscano Cigars do not require humidification and can be stored at room temperature conditions for years.

The Toscano Stilnovo utilizes a combination of American and Italian-grown fire-cured Kentucky (seed) tobacco.  The wrapper comes from the U.S. while the binder (and filler) come from Italy. The fillers are aged four years.

The perfecto: of the Toscano Stilnovo measures 6 1/2 x 40. The cigars come packaged in a three-count trapezoidal shaped box. The packaging incorporates a slide out trapezoid-shaped tray that houses the three cigars. There are cases that also 15 three-count boxes. 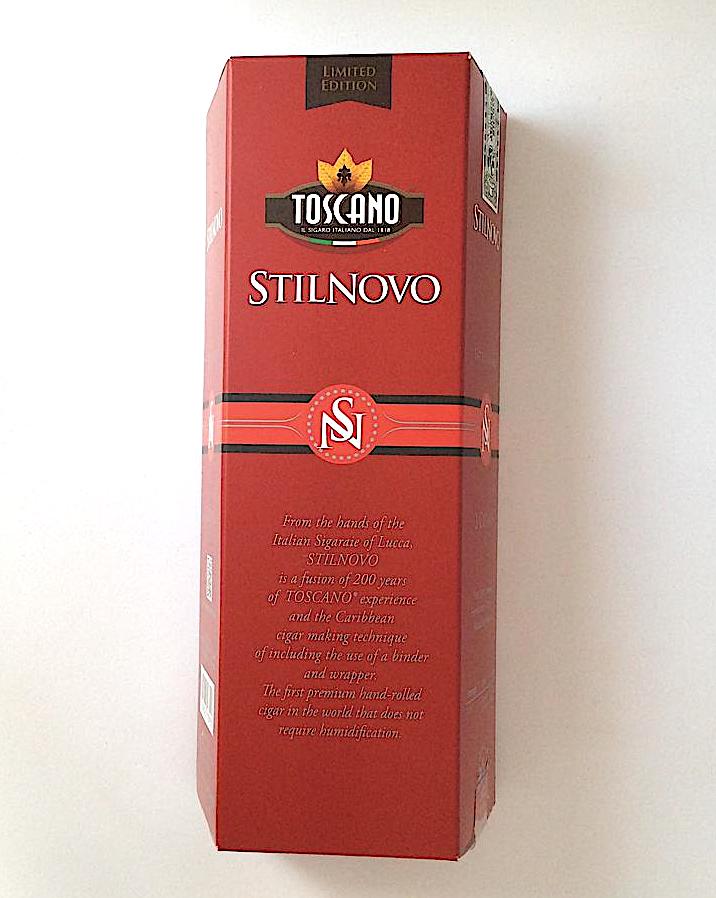 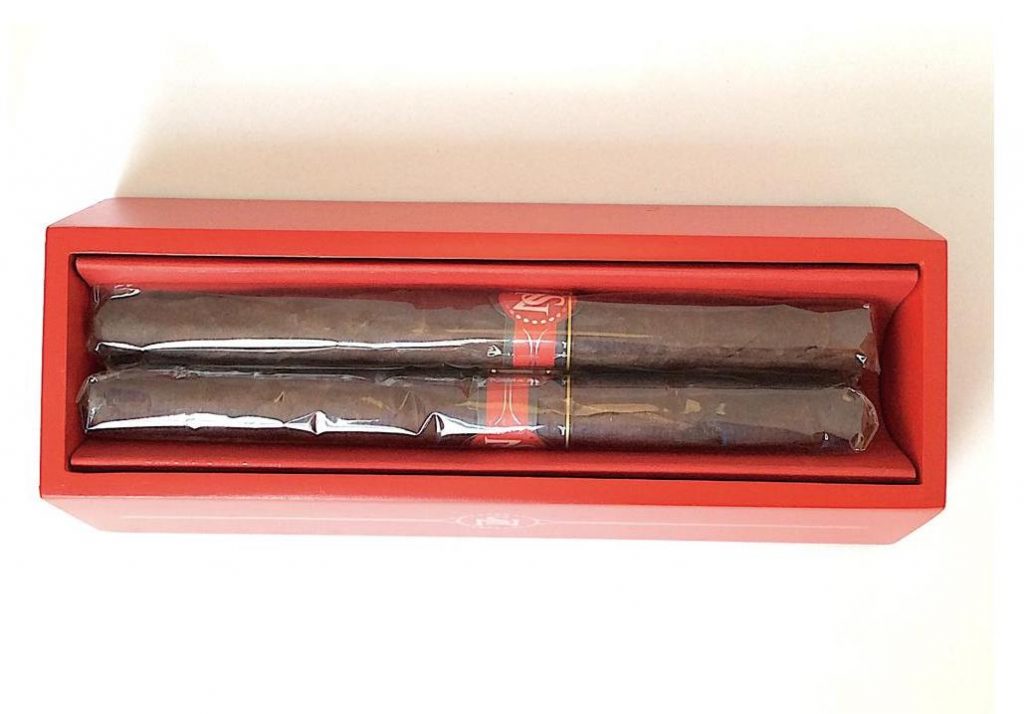 Toscano perfectos are known for their rugged look – and the Toscano Stilnovo is no exception. The American Fire-Cured wrapper had a dark roasted coffee wrapper. There wasn’t much in the way of oil on the surface. The wrapper had bumpy look with plenty of visible veins and some visible wrapper seams.

No cut was necessary on the Toscano Stilnovo, so it was on to the pre-light draw to start. The cold draw delivered a mix of black coffee, classic wood, and sweet almost-tangy like barbecue sauce. I judged this to be a satisfying pre-light draw. From this point on it was time to light up the Stilnovo and await what the smoking phase would provide.

The Toscano Stilnovo picked up where the pre-light draw left off with more notes of black coffee, classic wood, and barbecue sauce. It addition there was a black peppercorn note also present. Early on the coffee and wood notes were primary, but this was soon joined by the barbecue sauce note. Meanwhile, the retro-hale produced an additional layer of red pepper.

The final third of the Toscano Stilnovo saw the coffee notes take a slight edge over the wood notes. The peppercorn notes were now a close secondary note. There were still notes of barbecue sauce and citrus present as well. This is the way the Toscano Stilnovo came to a close. The resulting nub was slightly soft to the touch and cool in temperature.

At times it wasn’t the prettiest burn, but in terms of performance the Toscano Stilnovo’s burn, it was pretty good. The burn maintained a relatively straight burn path from start to finish. The burn line was jagged from time to time. The resulting ash was silver-gray and skewed toward the firmer side. The burn temperature was ideal, but this was a slightly slow burning cigar – taking about an average of 93 minutes.

Burn of the Toscano Stilnovo

In terms of strength, the Toscano Stilnovo started out smack in the medium range of the spectrum, but slowly built up in intensity throughout the smoking experience. By the second half, the Toscano Stilnovo moved into medium to full strength territory. The strength continued to increase right until the close of the cigar experience, but did not cross the threshold to full territory.

As for the flavors, they started out on the lower end of medium-bodied. The intensity level gradually increased throughout the smoking experience. While there was more body at the end of the Toscano Stilnovo than the beginning, the cigar still didn’t get out of the medium range.

There was a lot to like about the Toscano Stilnovo. From an innovation standpoint, I liked the fact that Toscano looked into creating one of its signature cigars with a binder. In general, I find fire-cured tobacco to be overpowering. In the case of the Stilnovo, I didn’t find this to be the case. At the same time, the sweet barbecue sauce notes are going to remind you that this is still a fire-cured cigar. This is a cigar I would smoke again and it’s one I could recommend to a seasoned cigar enthusiast as it does have some strength. To buy this cigar, it may not be worth it to you to invest in the $21.95 three-pack. Unless one is a fan of the fire-cured blends, I’d still recommend trying one before investing in one of those packs.