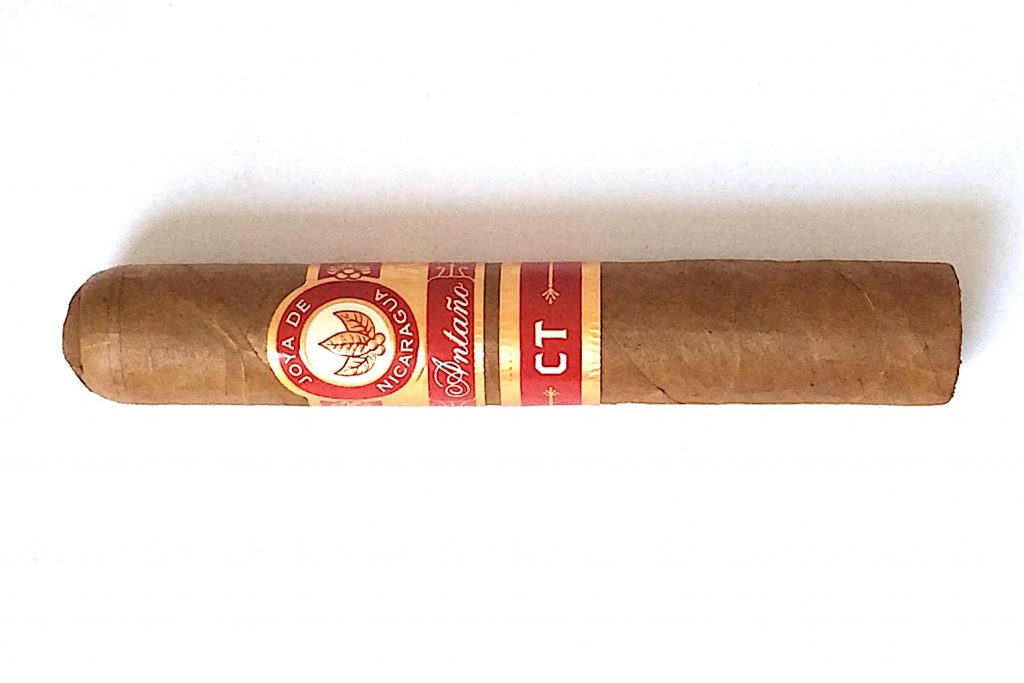 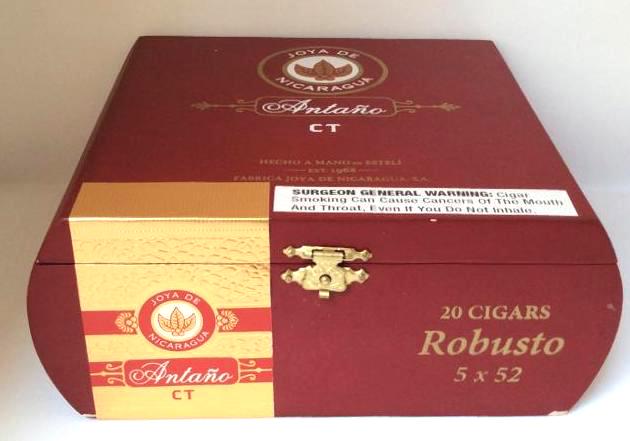 Without further ado, let’s break down the Joya de Nicaragua Antaño CT Robusto and see what this cigar brings to the table.

In addition to the Ecuadorian Connecticut wrapper, the Joya de Nicaragua Antaño CT features all Nicaraguan tobaccos for the binder and filler.

The Joya de Nicaragua Antaño CT is available in four sizes – each is presented in 20-count boxes. 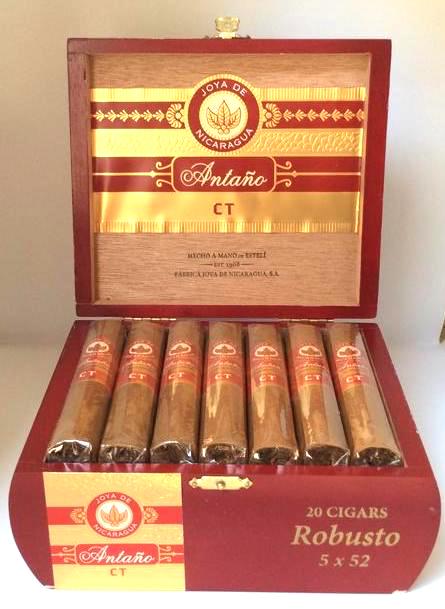 The Ecuadorian Connecticut Shade wrapper is exquisite looking. It has a butterscotch color to it. There was a coating of oil on it. While the wrapper had some thin visible veins and thin visible wrapper seams, this was a wrapper that was on the smooth side. 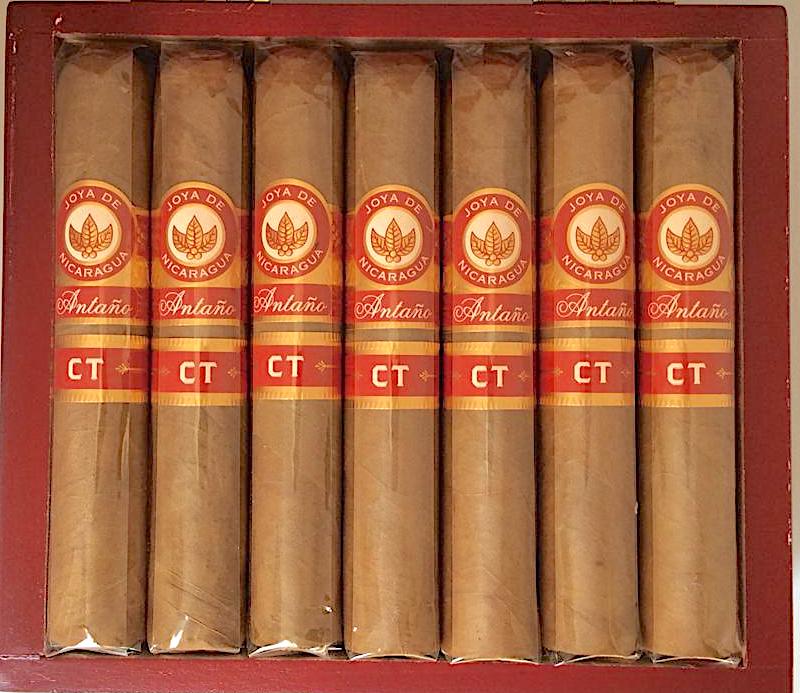 Close up of the Joya de Nicaragua Antaño CT Robusto

There are two bands on the Joya de Nicaragua Antaño CT. The band features a mostly gold, red, and white color scheme. On the center of the band is a gold and red leaf sitting on a white circular field. The circular field has a red ring around it with gold trim. On the ring is the text “JOYA DE NICARAGUA” in white font arranged in a curved fashion. Below the ring is a red rectangular field with the text “Antaño” in white cursive font. The remainder of the band has gold and red adornments.

The secondary band is also has a gold, red, and white color scheme color with gold trim on the top and bottom. The text “CT” in white trim. There is a thin gold pin-stripe flanking the left and right side of that text.

The Joya de Nicaragua Antaño CT Robusto started out with a combination of lemon-citrus, cream, classic wood, black pepper, and cedar. It took a little while for a dominant note to emerge, but by the middle of the first third, the lemon-citrus and cream notes moved to the forefront. The classic wood, black pepper, and cedar settled in the background. On the retro-hale, there was an additional layer of cedar with a slight amount of black pepper mixed in.

During the second third of the Joya de Nicaragua Antaño CT Robusto, the cream notes started to subside and moved into the background during the early part of this stage. Meanwhile, the classic wood notes started to increase in intensity and by the latter part of the second third, these notes joined the lemon-citrus in the forefront. Concurrently the black pepper became more prominent on the retro-hale.

The last third saw the wood notes take over as the primary note. The black pepper was a close secondary note. These flavors were rounded out by the lemon-citrus and cedar notes. By this point, the creamy notes had dissipated. This is the way the Joya de Nicaragua Antaño CT Robusto came to a close. The resulting nub was firm to the touch and cool in temperature.

The burn of the Joya de Nicaragua Antaño CT Robusto scored at our highest level – “Exceptional.” This is a cigar that had little problem maintaining a straight burn path and a straight burn line. The resulting ash was firm. This was an ash that had a salt and pepper color to it. As for the burn rate and burn temperature, both maintained ideal levels. 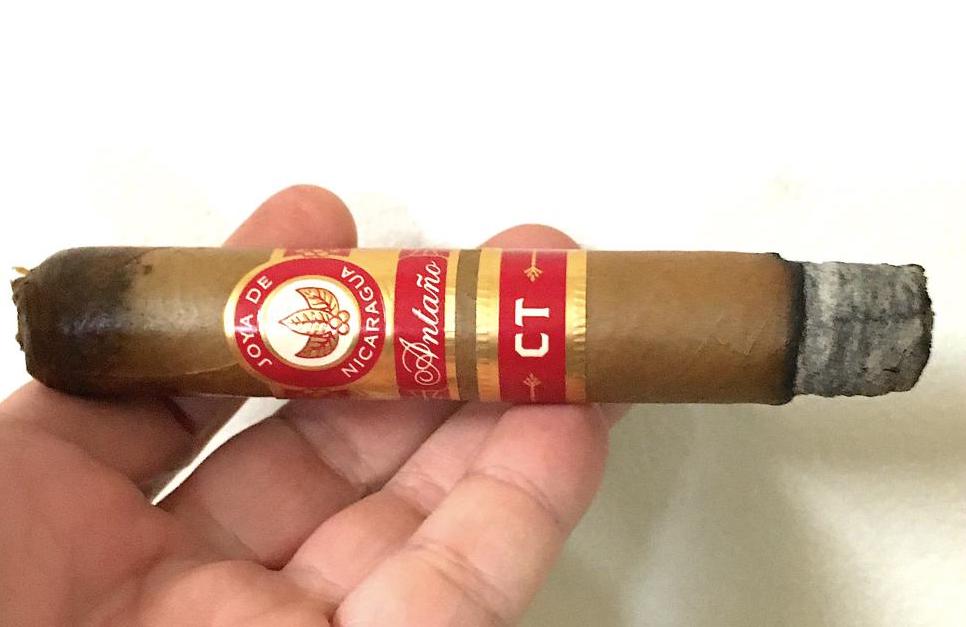 The draw to the Joya de Nicaragua Antaño CT Robusto scored very nicely as well. This was a cigar that had a good balance of resistance and openness. In the end, this was a low maintenance cigar to derive flavor from.

In terms of strength versus body, the body had a slight edge throughout the smoking experience.

When it comes to the Joya de Nicaragua Antaño CT Robusto, it is a good cigar, but I found this to be a cigar that lacked “wow” power. I had high hopes for the Antaño CT specifically because it was joining the Antaño brand – the brand that I consider to have Joya de Nicaragua’s best blends. On one hand, it wasn’t as smooth and creamy as a traditional Connecticut Shade, and on the other hand, it wasn’t as bold and spicy as I was expecting from a contemporary Connecticut Shade. In the end, this is one of those cigars for which I recommend trying a sample first before deciding to purchase.