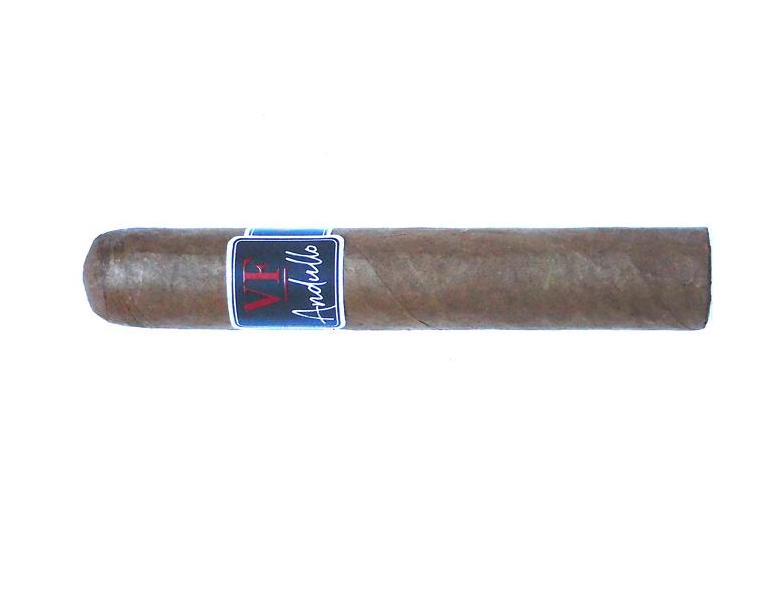 Andullo tobacco undergoes a very different curing process than traditional cigar tobacco leaves.  This involves putting tobacco leaves in palm seed pods known as yagua. The pods are then wrapped in rope, causing the Andullo tobacco to compress into a thick bar almost looking like a roll of salami. Once it has hardened, it typically is shaved off. This technique has been used in the Dominican tobacco industry. It’s no stranger to Tabacalera S.L.U. and Tabacalera USA. Last year, Tabacalera USA’s H. Upmann Hispaniola used Andullo-cured tobacco. It’s a cigar that comes out of the same factory (Tabacalera de Garcia) as the VegaFina Fortaleza 2 Andullo. It is also worth noting that in recent years, the La Aurora Cigars factory that is located in the Dominican Republic has done a lot of work with the Andullo-cured tobacco. While used with cigars from time to time, Andullo tobacco is typically used in snuff, chewing tobacco, or pipes.

Without further ado, let’s break down the VegaFina Fortaleza 2 Andullo and see what this cigar brings to the table. 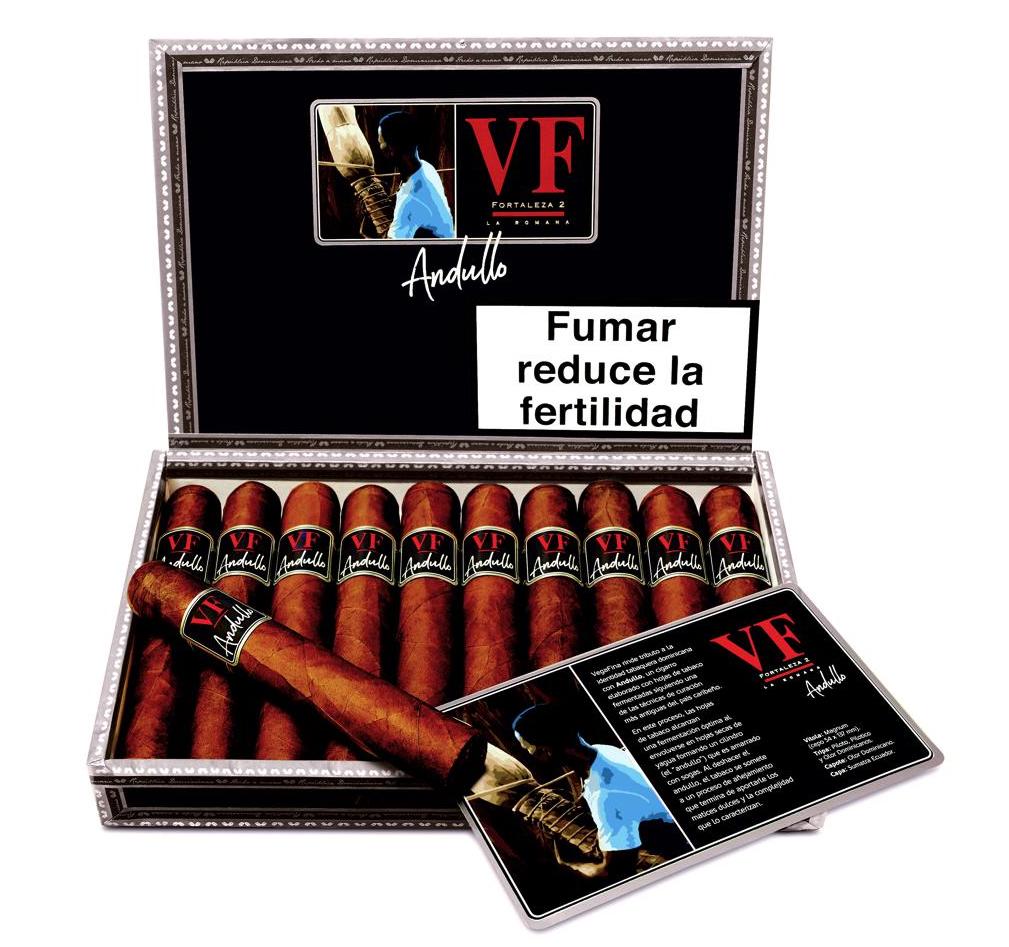 The Ecuadorian Sumatra wrapper of the VegaFina Fortaleza 2 Andullo had a medium brown color with a light sheen of oil. This was a wrapper that was on the smooth side. Any visible veins were on the thin side, and most of the wrapper seams were well hidden.

The band of the VegaFina Fortaleza 2 Andullo is different than most of the VegaFina bands seen to date. The band is black with silver and black trim surrounding it. The center of the band has a red “VF” with a small red horizontal binder to it. Under that is the text “Andullo” in a silver handwritten-style font. On the left and right side of the band is the text “VEGAFINA” in red font and “FORTALEZA 2” in a smaller silver font.

A straight cut was used to remove the cap of the VegaFina Fortaleza 2 Andullo. Once the cap was removed it was on to the pre-light draw ritual. The cold draw delivered a mix of subtle earth, natural tobacco sweetness, and musty notes. Overall it was a satisfactory pre-light draw. At this point, it was time to light up the VegaFina Fortaleza 2 Andullo and see what the smoking phase would have in store.

The start of the VegaFina Fortaleza 2 Andullo delivered more earth, natural tobacco, and musty notes. There were also berry and cream notes present. Early on the berry and natural tobacco notes moved into the forefront. The cream, earth and musty notes settled into the background. There was also a touch of cedar and black pepper that emerged during this phase. Meanwhile, there was an additional layer of berry and black pepper on the retro-hale.

During the second third, the berry notes receded into the background, leaving the natural tobacco notes as the main flavor. There was a slight bitterness that surfaced with the natural tobacco. Meanwhile, the berry joined the earth and musty notes. There was a decrease in the creaminess and by the midway point, the creaminess had pretty much evaporated. At the same time, there was an increase in cedar and pepper.

The last third saw the natural tobacco notes remain primary. The cedar and pepper notes were now more prominent notes, but still in a secondary role. There still were earth and musty notes present. This is the way the VegaFina Fortaleza 2 Andullo came to a close. The resulting nub was slightly firm to the touch and cool in temperature.

Overall the burn performed quite well. There was some occasional jaggedness from time to time, but the VegaFina Fortaleza 2 Andullo maintained a straight burn path and did not require excessive touch-ups. The ash of the VegaFina Fortaleza 2 Andullo was near white in color. This was an ash that was definitely on the firm side. The burn rate and burn temperature were both ideal. 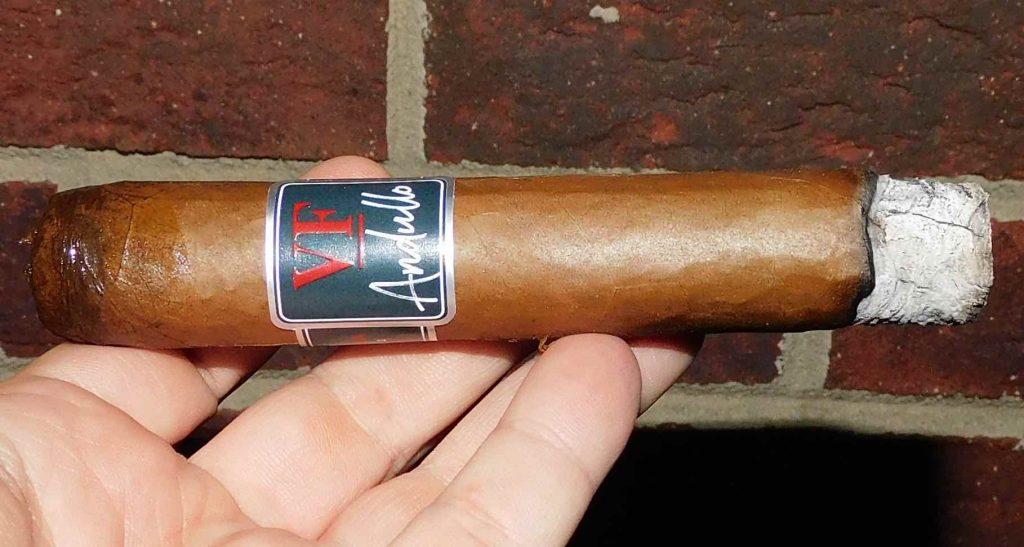 While normally I like a little resistance on the draw, the VegaFina Fortaleza 2 Andullo had a little more resistance than I prefer. There were no times the cigar went out or hit any plugged areas, but this cigar was skewered toward the tighter side.

This is a cigar that started out with mild to medium strength and medium body – and pretty much remained there throughout the smoking experience. There wasn’t much in the way of variance of the intensity level of either attribute. At the same time both the strength and body balanced each other with neither attribute overshadowing the other.

I’ve said it over and over again, the thing that I love about VegaFina brand is that it delivers excellent cigars at a very competitive price point. Put the Fortaleza name aside, this is not a powerful cigar, but a nuanced one. It’s not going to deliver you a heavy piece of the Andullo tobacco, but certainly, it delivers. I’ve had more powerful Andullo smokes, but what I like about this one is how the blend was made to work for the VegaFina profile – which is classic. If you are new to Andullo tobacco, this would be the cigar to start out with. It’s a cigar I would recommend to any cigar enthusiast to try. As for myself, I would smoke this again – and it’s worth buying again.