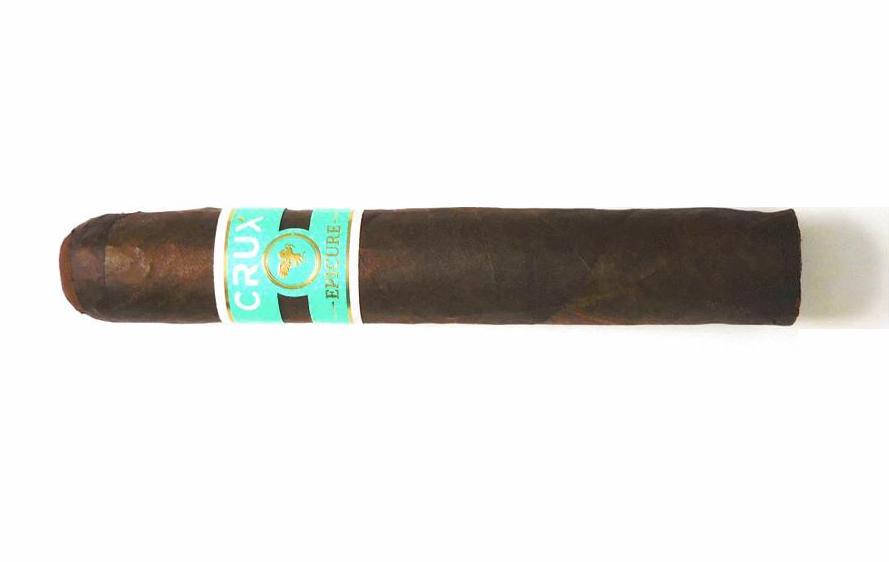 Over the past few years, a brand that has been one of the most consistent performers on Cigar Coop has been Crux Cigars. The brand was founded in 2014 by Jeff Haugen and has amassed quite an impressive track record. This includes a #1 Cigar of the Year in 2016, a #2 Cigar of the Year in 2018, four consecutive Top 10 cigars, and two years (2018, 2019) running the highest performing brand from an average score standpoint. Over the years, the one gap in the portfolio would be a Maduro offering. That would change in 2018 when the company announced it was releasing its first Maduro. The cigar would make it to market the following year with the Crux Epicure Maduro. It would be launched in three sizes, but in 2020 the company added two additional sizes – one of which was a 6 x 60 Gordo. Today we take a closer look at the Crux Epicure Maduro in the Gordo size. 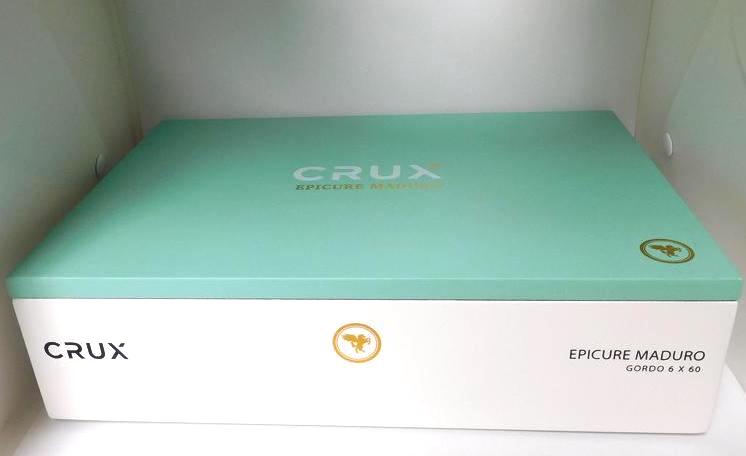 Without further ado, let’s break down the Crux Epicure Maduro and see what this cigar brings to the table.

The Crux Epicure Maduro features a San Andres Maduro wrapper. The remainder of the blends are all-Nicaraguan tobaccos. 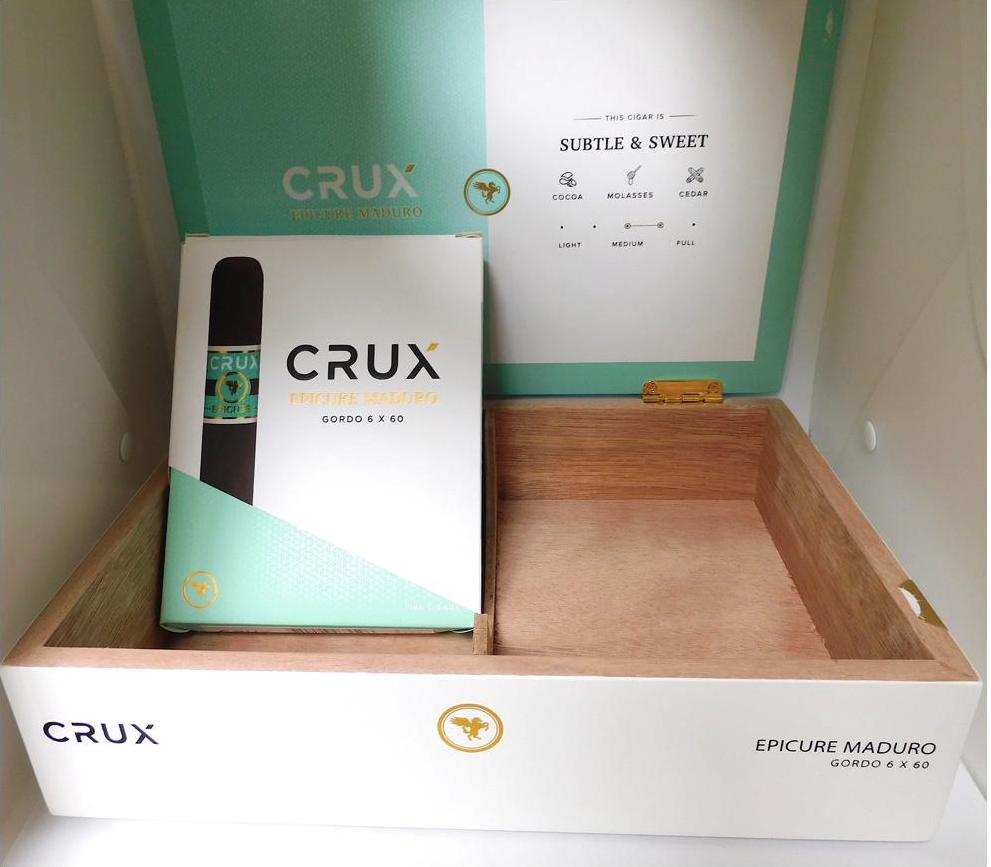 Packaging of the Crux Epicure Maduro Gordo (Inside View)

The San Andres wrapper of the Crux Epicure Maduro Gordo had a chocolate brown color. This was a toothy wrapper with a sandy texture. There wasn’t much in the way of oil on it. There were also some thin visible veins and the dark color of the wrapper did a good job at hiding the wrapper seams. 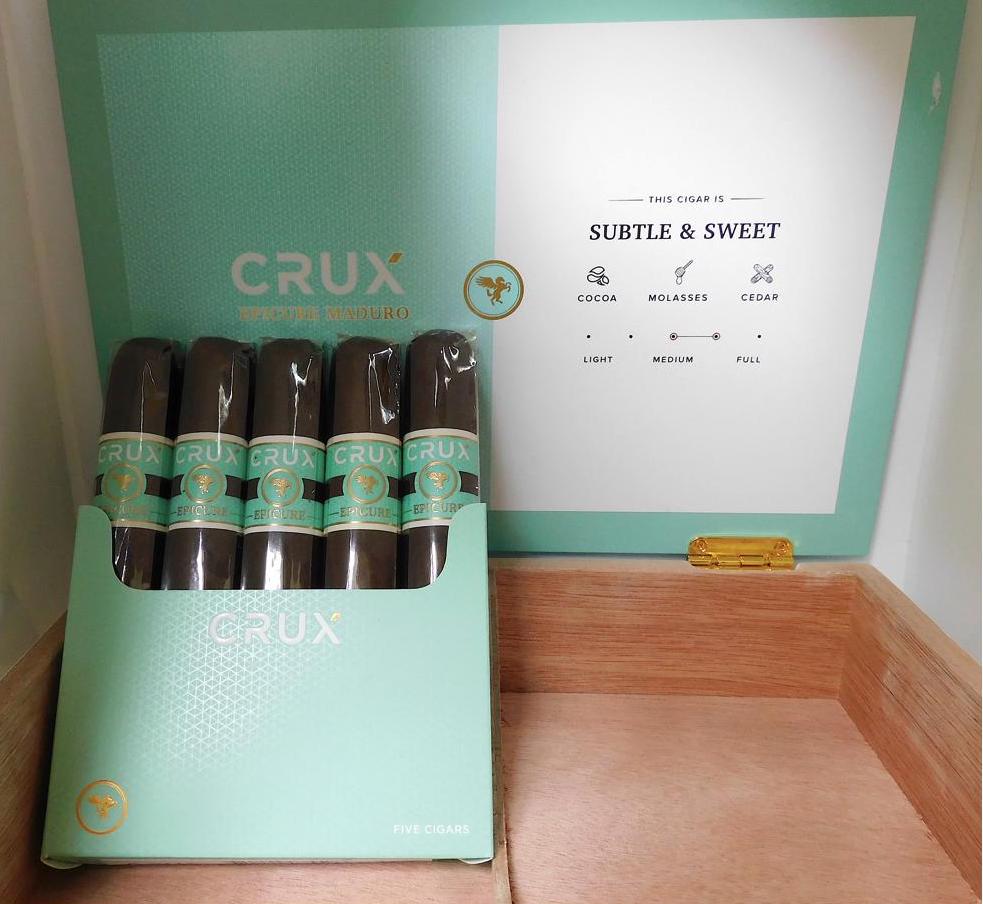 The band to the Crux Epicure Maduro had a light cyan color with a slightly textured look. The center of the band features a gold stencil of a pegasus surround by a ring. Above the pegasus is the “CRUX” logo in white with a gold mark in the corner. Below the pegasus is the text “EPICURE” in gold font with a short pinstripe to the left and right. There is a rectangular stencil cutout on the left and right side of the band that exposes the wrapper. The far left of the band has a gold circular seal with the Crux logo on it.

The cigar experience of the Crux Epicure Maduro Gordo was commenced by using a straight cut to remove the cap. As I normally do, I opted for a wide ring gauge cutter to cleanly make the cut. Once the cap was removed, it was on to the pre-light draw phase. The cold draw delivered a mix of cocoa, earth, and a slight amount of dry fruit. Overall this was a very positive pre-light draw experience. At this point, it was time to light up the Crux Epicure Maduro Gordo and see what the smoking phase would have in store.

The Crux Epicure Maduro Gordo started out with more notes of cocoa, earth, and dried fruit. There also was some black pepper that entered the equation. Early on the cocoa notes moved into the forefront. The dried fruit was a close secondary note. Further back were the earth and pepper notes. Midway through the first third, some cedar notes also emerged in the background.

The second third of the Crux Epicure Maduro Gordo saw the cocoa notes morph into a more of a classic coffee note. The dried fruit still was a close secondary note. During this stage of the smoking experience, the black pepper slowly increased in intensity. Meanwhile, there were notes of earth and cedar in the background.

The last third saw the black pepper join the coffee notes in the forefront.  There still were notes of fruit, earth, and cedar in the background. This is the way the Crux Epicure Maduro Gordo came to a close. The resulting nub was slightly soft to the touch and cool in temperature.

While it did require some touchups along the way, the Crux Epicure Maduro Gordo performed quite well in the burn category. For the most part, the cigar had little trouble maintaining a straight burn path and keeping a straight burn line. The resulting ash wasn’t overly firm, but it wasn’t loose nor flakey. This was an ash with a salt and pepper color scheme. The burn temperature was ideal. I did find this cigar burned a little fast as the average smoke time came in just under the two-hour mark (1:59). The quicker burn didn’t have any other adverse effects other than a quicker smoking time. 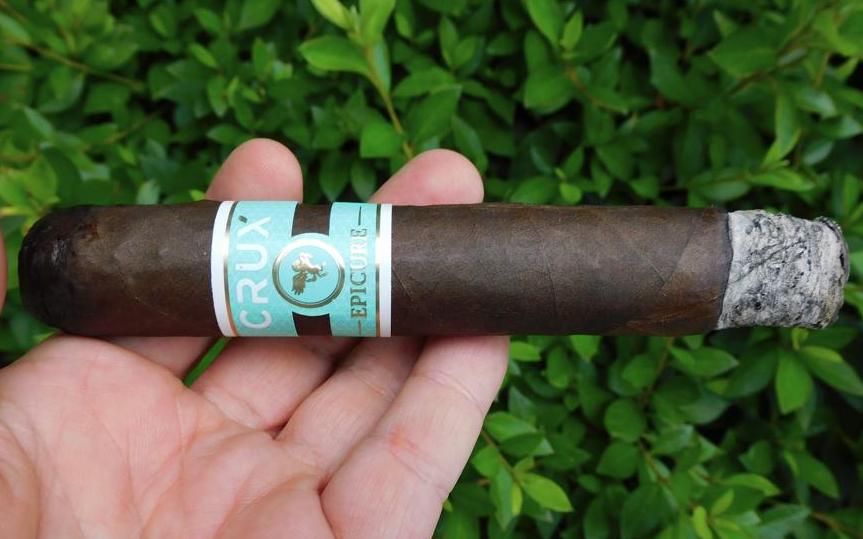 The Crux Epicure Maduro Gordo started out with medium strength and medium body. The intensity levels increased along the way for the strength and body. The body increased at a slightly more rapid pace and progressed into medium to full territory bu the second half. While there was more strength toward the end of the Epicure Maduro Gordo than the beginning, it still fell in the medium range of the spectrum.

When looking at strength versus body, there was a slight edge I gave to the body.

Despite the fact that Gordo vitolas sell well, they are often panned by reviewers. I’ve come up with an expression “Gordos are vitolas too.” In the case of the Crux Epicure Maduro, when it comes to this blend I’d recommend trying this size. I found the Epicure Maduro blend to represented very well by the larger ring gauge. It’s a relatively straight-forward San Andres Maduro flavor-wise. My only complaint is on the last third I found the spice to become more pungent. This is a cigar that I would recommend to a seasoned cigar enthusiast or a novice looking to progress to something in the medium/medium plus range. Even if you are not a fan of the Gordo, give this one a try. It’s a cigar I’ll smoke again and buy multiples to keep in the humidor.