“This just might just be one of the best 38 ring gauge cigars I have ever had. It’s worthy of the name Connoisseur.”

The 2016 Cigar Coop Cigar of the Year is the Crux du Connoisseur No. 2 by Crux Cigar Company. This cigar was launched at the 2015 IPCPR Trade Show and then hit the stores at the start of the 2016 year. Crux Cigar Company is owned and operated by Jeff Haugen and Joel Rogers, the owners of Tobacco Grove in Maple Grove Minnesota. The two have partnered with the Placencia factory in Esteli, Nicaragua to produce the cigars for their brand. Since launching in 2014, the company has built up an impressive portfolio of what we would consider box worthy blends. With the Crux du Connoissuer, they reach the stratosphere.

The “du Connoisseur” name can be derived from the fact that all three vitolas in the line are what are typically called “connoisseur” sizes – namely 38 ring gauge and under. Small ring gauges have become a core competency for Crux Cigars. Crux Lines such as the Ninfamaniac, Ninfamaniac Dark, Skeeterz, and Sports have all been releases that have 35 ring gauges and under. While this may be against the grain in terms of today’s market of 50+ ring gauges, the formula is working very well for Crux. 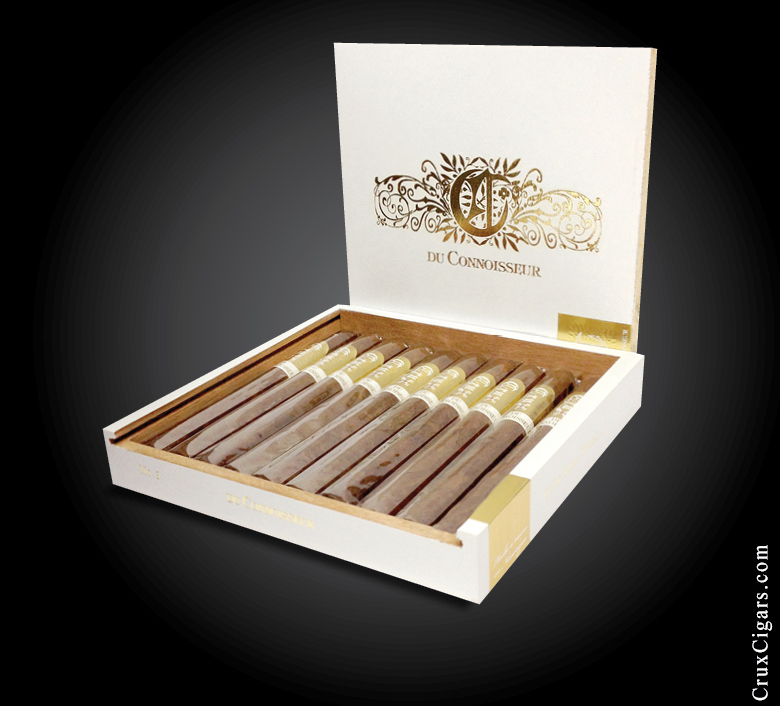 The blend incorporates a wrapper from Jalapa over a Nicaraguan binder and a Honduran filler. As with all cigars from Crux, the Crux du Connoissuer line comes out of the Placencia factory in Esteli, Nicaragua. The Crux du Connoissuer No. 2 is a little shorter than your standard lancero – measuring 6 1/2 x 38.

The Crux du Connoisseur No.2 delivers notes of coffee, natural tobacco, cedar, nut, and red pepper. During the smoking experience, these flavor notes complemented each other beautifully. At the same time there was a slight creamy texture that kept the flavors smooth Toward the end of this cigar there was also a nice spicy kick. The flavors delivered are medium to full-bodied and countered by medium strength.

In September 2015, a pre-release smoke of the Crux du Connoissuer No. 2 rated a box split. However when we revisited mid-year, this cigar had skyrocketed to Oasis level. Since then, the cigar consistently performed at that level – a key component Cigar Coop looks at when selecting a Cigar of the Year.

Delivering on an outstanding flavor profile, plenty of complexity, and great construction, the Crux du Connoisseur is the most box worthy of the box worthies this year – and thus is the #1 Cigar for 2016.